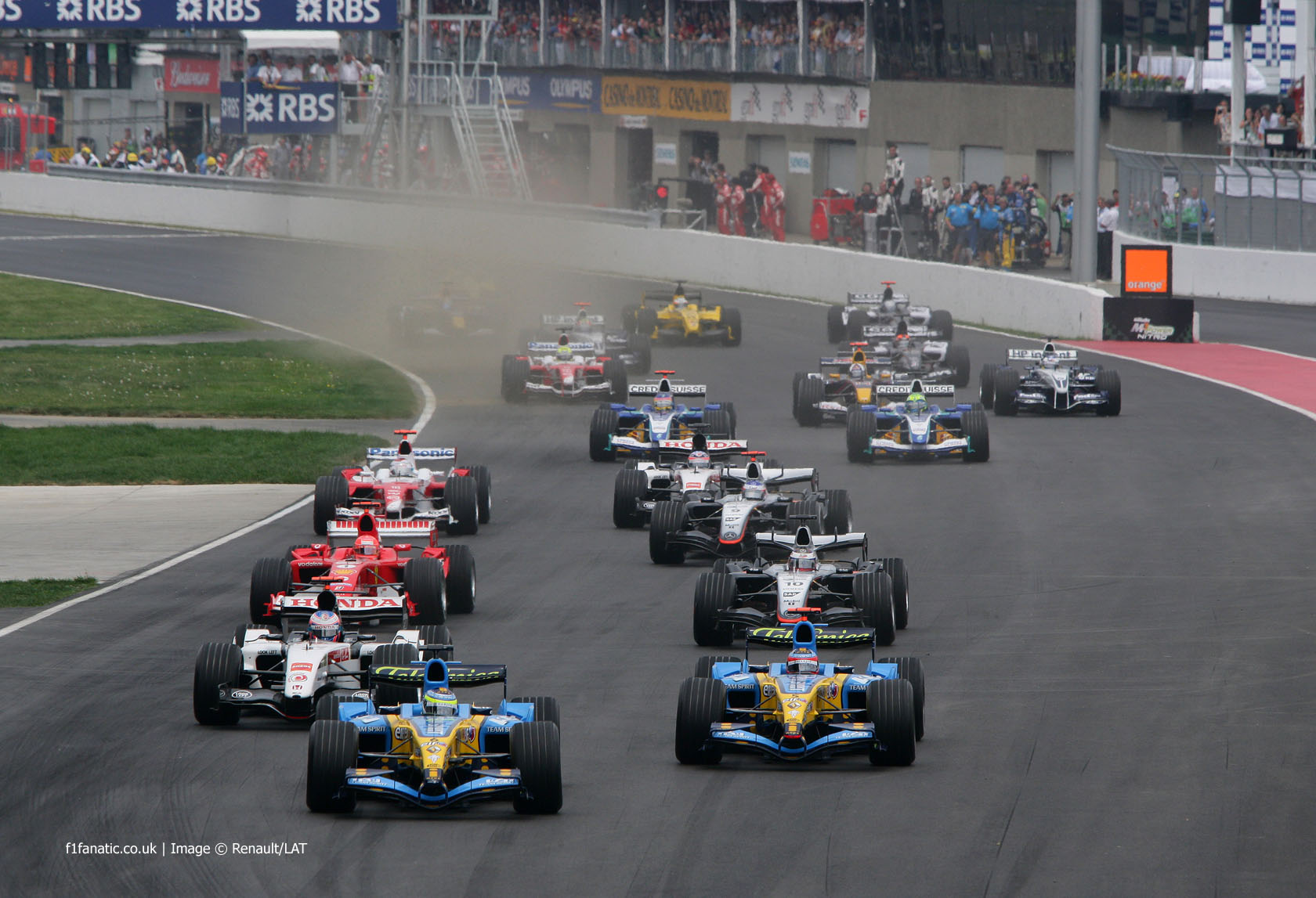 The Canadian Grand Prix proved dramatic and incident-filled from start to finish, if lacking in much outright racing. But, with Kimi Raikkonen winning and Fernando Alonso failing to score, it gave a welcome shot in the arm for the championship battle.

Jenson Button and Michael Schumacher provided the Saturday shock by stealing the front row of the grid. But within 15 laps of the Canadian Grand Prix they had been found out. Schumacher stopped first after just 12 laps, and Button three later. Crucially, neither were able to press home their low-fuel advantage as they both made terrible starts, possibly precipitated by Button’s slow warm-up lap.

When the red lights faded out the Renault made their once-customary lightning starts and simply drove around the front row-sitters, with Giancarlo Fisichella leaping from fourth to lead team mate Alonso.

Further back Juan Pablo Montoya got away cleanly from fifth and demoted Schumacher, then baulked him at the hairpin to allow Raikkonen to move through. Thus the championship protagonists were lined up intriguingly behind their team mates.

As early as lap seven it was clear that Alonso was quicker than Fisichella, but with Renault refusing to verbally impose team orders (which, at any rate, have been banned since 2003, although no-one has yet been punished for it) he was stuck in second. Button was not falling away but after lap fifteen Montoya and Raikkonen began reeling in the Renaults. From 9s on lap 17 Montoya was within 5.5s of Alonso on lap 20.

Alonso’s frustration was compounded two laps later when Christian Klien, returning to Red Bull in place of Vitantonio Liuzzi, exited the pits and badly held the the Spaniard for four corners, costing him at least two seconds.

Now Montoya was almost close enough to pounce on Alonso, but there would be no time to try a move on the track as the first round of pit stops were just about to start. They began with those of the title rivals on lap 24.

Montoya and Fisichella followed on lap 25, giving Montoya a clear shot at passing Alonso via the pit stops. But as he swept back onto the circuit the rear of his car stepped out of line and the correction pitched him onto the grass at turn two. He crawled back on, but Alonso was already four seconds up the road.

Meanwhile, Jacques Villeneuve had a strong qualifying position ruined after contact with Takuma Sato’s BAR on lap one forced him to pit for a replacement front wing.

On lap 26 Narain Karthikeyan clouted one of the many concrete barriers that line the circuit Villeneuve and retired with broken right rear suspension. This was another blow to the Jordan team that had already seen team manager Trevor Carlin leave prior to the weekend and suffered a public spat between Kathikeyan and team leader Colin Kolles. It would turn out that Karthikeyan was in good company, though.

Alonso was quickly back on Fisichella’s team mate and furiously radioed the Renault team, who impassively responded, “we understand, we know you’re quicker, overtake him.” On lap 30 he went for it, even briefly drawing alongside his team mate who calmly maintained a defensive line.

Alonso, frustrated, began to make mistakes. At the start of lap 31 he braked too deep into turn one and clattered the exit kerbs, all the time allowing Montoya to move ever closer, even if Raikkonen wasn’t quite on the pace at this point.

But the next time around the pressure seemed to lift from Alonso for good. Fisichella slowed and Alonso and Montoya quickly zoomed past. Hydraulic failure, it transpired, was the cause, and Fisichella was livid at his third mechanical failure as Alonso again enjoyed a reliable race.

All the same, this was a race Alonso would not finish. Free of Fisichella, he still had Montoya bearing down on him and was more than aware that the McLaren driver could run a longer second stint and pass him at the pit stops. On lap 38 he asked just a little too much of his Renault and smacked the barrier at turn four. For the first time in 2005 Alonso failed to complete a race distance.

Further back, Rubens Barrichello was having an eventful race. After a gearbox failure in qualifying (Schumacher having suffered the same in practice) he had started last, from the pits, in a car brimmed full of fuel. On lap 34 he ran wide at the hairpin, then cut the final chicane five laps later, but was still making progress.

Schumacher, meanwhile, was bearing down on Button for what was now third place, with Jarno Trulli back in fourth in a Toyota that was suffering one of its periodic bad races.

Takuma Sato had ‘retired’ as early as lap 22 with apparent gearbox problems, but the quick-thinking BAR team set about fixing a working gearbox and engine to the car and sent him back out after a mammoth 24-lap stop, simply to rack up as many laps as possible to secure a more advantageous qualifying slot for the United States Grand Prix. It meant that Sato could pass anyone who retired in the next three laps.

And that was exactly what happened to, who else, but Sato’s own team mate. Schumacher’s pressure on Button finally told on lap 47 when he hit the ‘wall of champions’ in time-honoured fashion by taking too much kerb at the preceding chicane. The mess caused a safety car period, and inadvertently triggered the end of Montoya’s race.

As the teams scrambled to bring their drivers in Montoya apparently missed his chance of a stop and Raikkonen, lying second, made it in instead and seized the advantage. Montoya stopped the next time around but on leaving the pits and merging bck into traffic was promptly disqualified for leaving the pits when he shouldn’t have – an instant black flag situation.

This at least spared McLaren the dilemma of trying to swap their drivers to give Raikkonen the massive championship advantage. Now began the traditional Montreal brake failure retirements late in the race – Trulli on lap 62, from third, and the hapless Sato, on lap 65.

For Raikkonen, the win gave him a renewed shot at the championship with the margin cut back down to 22 points as it had been before Nurburgring. With 11 rounds left in this ever-changing championship, it is a more than realistic prospect. But, with Ferrari finishing second and third, nor can they be discounted at this stage.