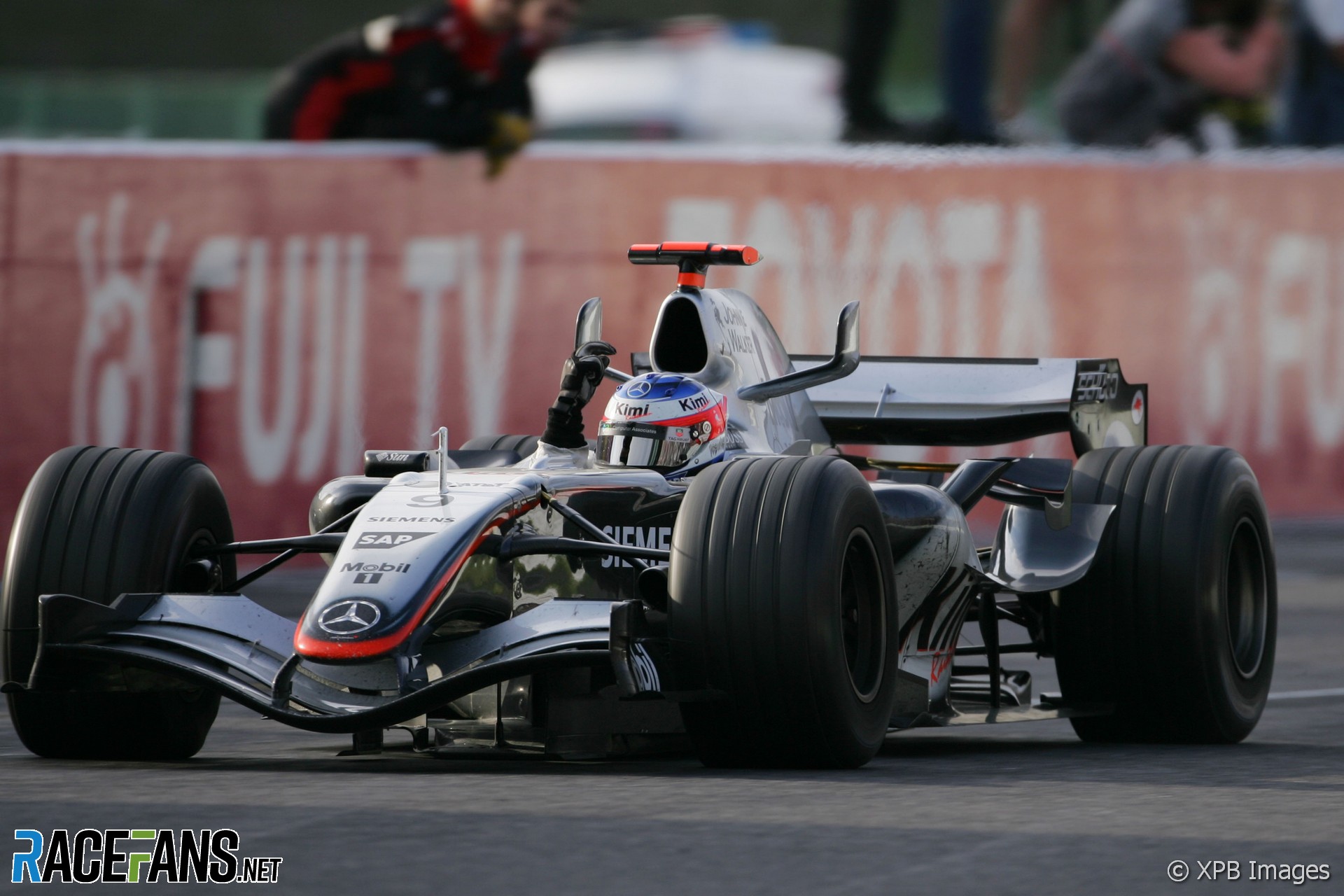 The Japanese Grand Prix was lights-to-flag drama, with scintillating overtaking, controversy and a sizeable shunt. Kimi Raikkonen took his best win to date in the best race for years from Giancarlo Fisichella on the final lap.

The groundwork for a stellar Sunday in Suzuka was laid by the previous morning’s rain. Showers before and during qualifying neatly lifted the front-running trio of Raikkonen, Fernando Alonso and Juan Pablo Montoya out of their front-row comfort zones and into the final positions.

Ralf Schumacher gave Toyota their second pole position, again in unconventional circumstances, ahead of Jenson Button and Fisichella – the latter’s failure to hold off Michael Schumacher in Interlagos perversely rewarding him with a more favourable qualifying slot.

Although the race was dry, the start was chaotic. Takuma Sato, desperately trying to channel every drop of home support into a career-saving performance, speared off at the first corner followed by Rubens Barrichello. David Coulthard nearly squandered a scintillating start by running wide at 130R.

Then at the chicance all hell broke loose. Raikkonen took a look at Jacques Villeneuve and both missed the corner, bumping over the Astroturf and rejoining in the path of Montoya. As the Colombian pulled left to sweep past Villeneuve the Sauber driver moved the same way, pitching the McLaren straight into the retaining wall and wiping off the left side of the car. Cue the Safety Car for six laps.

At the restart Ralf Schumacher kept his lead from Fisichella who had got the better of Button when the start lights went out. Brother Michael eased passed a slow-moving Christian Klien and as they reached the chicane Alonso tried to do likewise but he too went straight on. The savvy Alonso realised he could not legitimately hold on to the position and quickly ceded it back to Klien, only to dart back past again at turn one, as if daring the stewards to press home the full weight of the rules.

Amid some confusion Alonso was finally told, three laps later, to let Klien past again. Then, having dropped back from Michael Schumacher to do so, was told he in fact did not have to but Klien was back ahead of him by now. It was another two laps before Alonso took his rightful place back, with Raikkonen now on his tail.

Meanwhile Toyota’s competitiveness had proved to be an illusion. Even with six laps of low fuel consumption behind the safety car, Ralf pitted on lap 12 suggesting he may have had fewer than ten laps’ worth of fuel to start with.

Four laps later, Raikkonen had joined Alonso and the elder Schumacher in a gripping battle for fifth. After a few half-opportunities Alonso seized the chance to take Schumacher on the outside of 130R at around 180mph, even with only two laps left to run until his pit stop.

Raikkonen now stepped up to the plate against the notoriously tough Ferrari driver but could not effect a pass. It soon transpired that this was partly because the two had comparable fuel loads, and they pitted together on lap 24. They resumed in the same order, but both now ahead of Alonso.

In similar circumstances two laps earlier Mark Webber had followed Coulthard into the pits and emerged ahead of him. This was good news for Williams as Antonio Pizzonia had spun out at Degner two on lap eight.

The other stops meant that Fisichella had now risen into the lead with a clear track from which he could surely now dominate proceedings. Despite being delayed by a sticking fuel flap Button was second ahead of an impressive Webber, and the Schumacher-Raikkonen-Alonso train separated the Australian from Coulthard and Ralf Schumacher.

Ralf’s was now they only Toyota left running after Jarno Trulli was taken out by Sato. Unsurprisingly, Trulli had no kind words for the home driver afterwards, whom the stewards disqualified from the results for causing the crash.

Schumacher could no longer parry the attacks of Raikkonen, who dived around the outside of him at turn one on lap 28. Four laps later Alonso did the same having unnerved the Ferrari driver into going off line at the chicane. Raikkonen raced on to catch the Button-Webber battle for second, but with this pair light on fuel he could only hang fire and wait for them to pit.

Fisichella, like Alonso, was taking his stops earlier than their McLaren rival and soon pitted, dropping to fourth. On lap 41 Button and Webber pitted together and again the Williams team turned Webber around quickly enough to gain a place. Raikkonen had only two laps to press home his advantage over the pair but did so expertly, pulling out of the pits with nine laps to go in second to Fisichella, having somehow cut the Italian’s lead from 20 seconds to just nine.

If his team mate was beginning to flag, Alonso was as relentless as Raikkonen, charging past Button on lap 43 and diving past Webber on lap 48 with two wheels on the grass approaching turn one! But he could do nothing to reel in Raikkonen but curse his less-than-optimal strategy and the FIA’s blunder.

With Raikkonen bearing down on him at over a second per lap, Fisichella went to pieces. On lap 50 he panicked behind a backmarker and baulked himself, bringing Raikkonen almost within range. He began to block the inside of the run into the chicane even when Raikkonen was too far back to chance a pass. Then, as they began the final lap, Raikkonen tucked up behind the Renault down the main straight, darted to the left missing the rear of the leader by mere millimetres, and swept grandly by around the outside of the first corner to take an amazing win.

Though the result meant McLaren lost of the lead of the constructor’s championship to Renault, nothing could restrain the elation of Raikkonen or Ron Dennis at having taken victory against such formidable odds. It mattered not that the championship was already settled but that on this day, champions past, present and (surely) future, fought as great a battle for victory as the sport has ever seen.