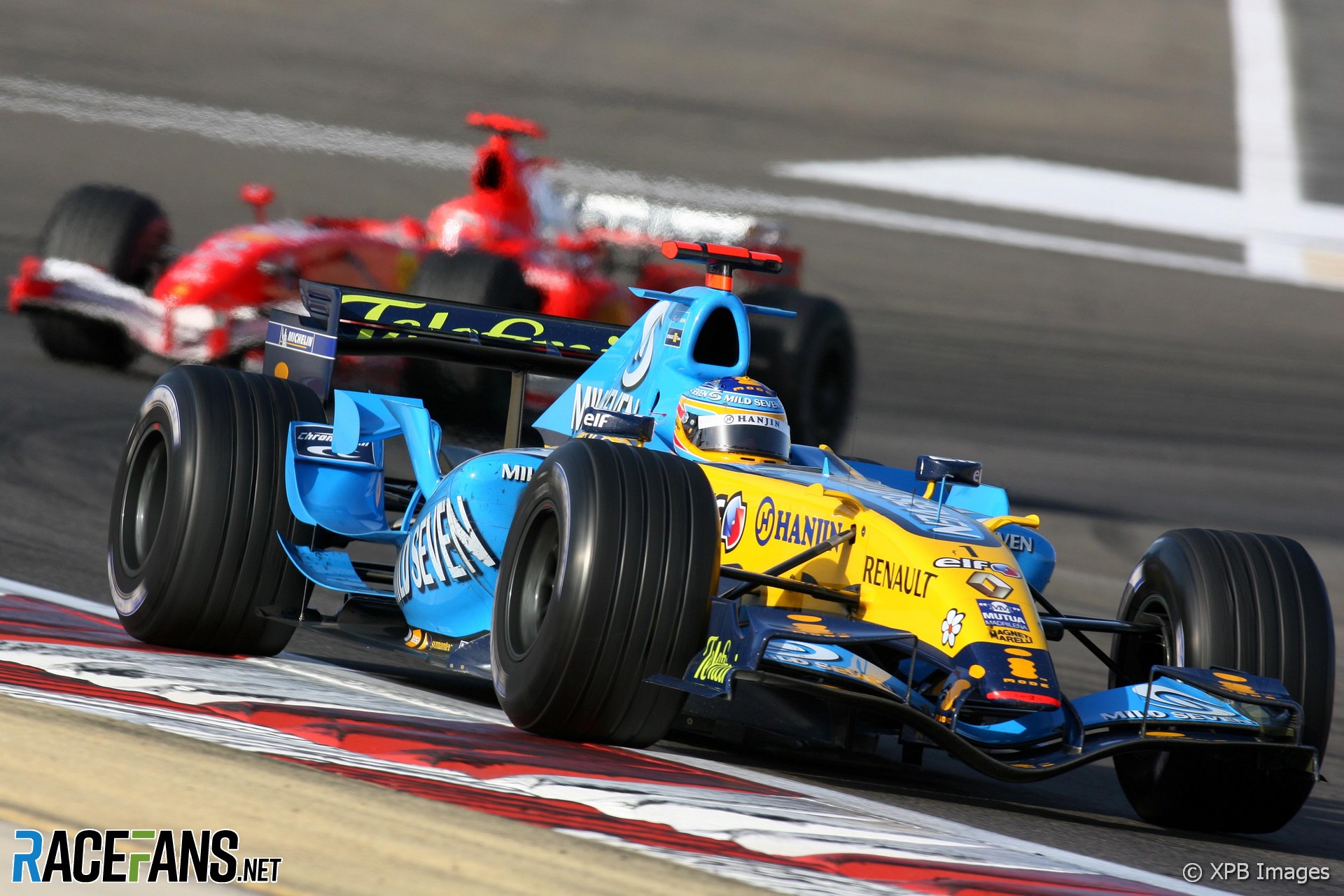 A storming first round at Bahrain set up a fantastic season’s racing. Champion Fernando Alonso edged out Michael Schumacher in a thrilling tussle as Kimi Raikkonen charged from the back to the podium.

As Ferrari had annexed the front row of the grid their rivals were keeping an eye on Felipe Massa, whom they expected to be manoeuvred into place to keep Alonso at bay. Sure enough, Massa carefully blocked Alonso away from the line, but out-braked himself allowing the Renault driver alongside and past.

Meanwhile Jenson Button had made a dismal start and was languishing behind team-mate Rubens Barrichello. Williams’ rookie Nico Rosberg T-boned Nick Heidfeld and stopped for a new front wing, and fellow newcomer Yuji Ide was issued with a penalty as his marshals failed to clear the grid in time for the start of the race.

Barrichello defended against Button with a surprising thoroughness, given that Button was clearly faster, it was only lap three, and that Barrichello never showed similar mettle against his former team-mate. Still, Button was past by lap four and rapidly became an ever-diminishing speck in the Brazilian’s field of vision.

On lap seven Massa’s debut for Ferrari took a dismal turn as he lost control of his car and hurtled off the track at turn one, very nearly taking Alonso with him. He limped to the pits where a 45-second stop destroyed his hopes of a points finish.

Raikkonen had successfully threaded his way past the slowest runners to move into tenth behind Jacques Villeneuve’s BMW by lap 11. On the same lap Button deprived Juan Pablo Montoya of third place and began reducing the gap between him and the Schumacher-Alonso battle.

Schumacher underlined the speed of the Ferrari 248 with a string of fastest laps, trying to break free of Alonso before his first stop. When he emerged from the pits on lap 15 he immediately lapped with 0.3 seconds of Alonso, as the new tyres permitted by the ’06 rules compensated for his heavier fuel load.

Alonso stopped four laps later and, with a new set of tyres and a front wing adjustment, decimated Schumacher’s lead, and hounded the German for lap after lap.

The rest of the field was buzzing with action – not least of which in the Super Aguri garage when both their cars turned up at once. Takuma Sato motored on while Yuji Ide pitted – and ran over the foot of one of his mechanics. As the crew were unable to get the refuelling rig working Ide’s first race came to an ignominious end.

Rosberg’s recovery drive was attracting much attention in the pit lane – he scythed past Nick Heidfeld on lap 24 and posted the fastest lap. Montoya and Raikkonen stuck with the classic McLaren gambit of running very heavy on fuel: Montoya pitting on lap 23, Raikkonen on lap 30 – the latter now up to sixth on a one-stop strategy.

But notably absent from the top ten were the Toyota drivers, enduring a dismal start to the season despite being the first team to launch their ’06 car. Michael Schumacher lapped Jarno Trulli on lap 32, with Alonso in his wheel tracks. But Alonso’s team mate Giancarlo Fisichella had already gone with hydraulic failure on lap 22.

Renault appeared to have the Ferrari strategy sussed and Schumacher peeled off into the pits for his second stop on lap 36 – exactly as they predicted. But the traffic fell in Schumacher’s favour as Alonso repeatedly caught slower cars in the fast sweeps of turns eight and nine.

Alonso made his final stop on lap 39 having gained precious little time on Schumacher, but a perfect turnaround by his pit crew meant he exited the pits right alongside his rival, whom he coolly pressed to the exit of the circuit before making his getaway. Schumacher, preserving his engine for Malaysia, never made a fight of it from there on.

Button made his final stop soon after and resumed behind Raikkonen in fifth. This became fourth when Montoya made his stop and the three finished in that order – suggesting Raikkonen had made rather more out of his McLaren than Montoya had.

Webber motored quietly to sixth but arriving behind him in seventh was his amazing team mate Rosberg. Only 21 seconds behind Webber despite his front wing change and having passed a host of rivals, Rosberg’s Formula 1 credentials could not be disputed for a second.

Christian Klien fittingly rounded off the points-scorers having out-qualified and out-raced Coulthard. Both Red Bulls finished the race despite not having covered a comparable distance in testing without breaking down – although Coulthard’s ground to a halt after taking the chequer.

Heidfeld struggled on BMW’s debut, though team-mate Villeneuve had driven strongly before being sidelined by an engine fire. Although there were only four retirements, the new engine regulations may claim more victims when the V8s have to tackle the heat of Malaysia next week.

Alonso modestly dedicated his stunning win to his team – a kind act, for very few drivers have beaten Michael Schumacher in a straight fight, in comparable cars, when the German has started from pole position. Raikkonen’s amazing arrival in third from 22nd suggests this may well be a three-way fight for the title.