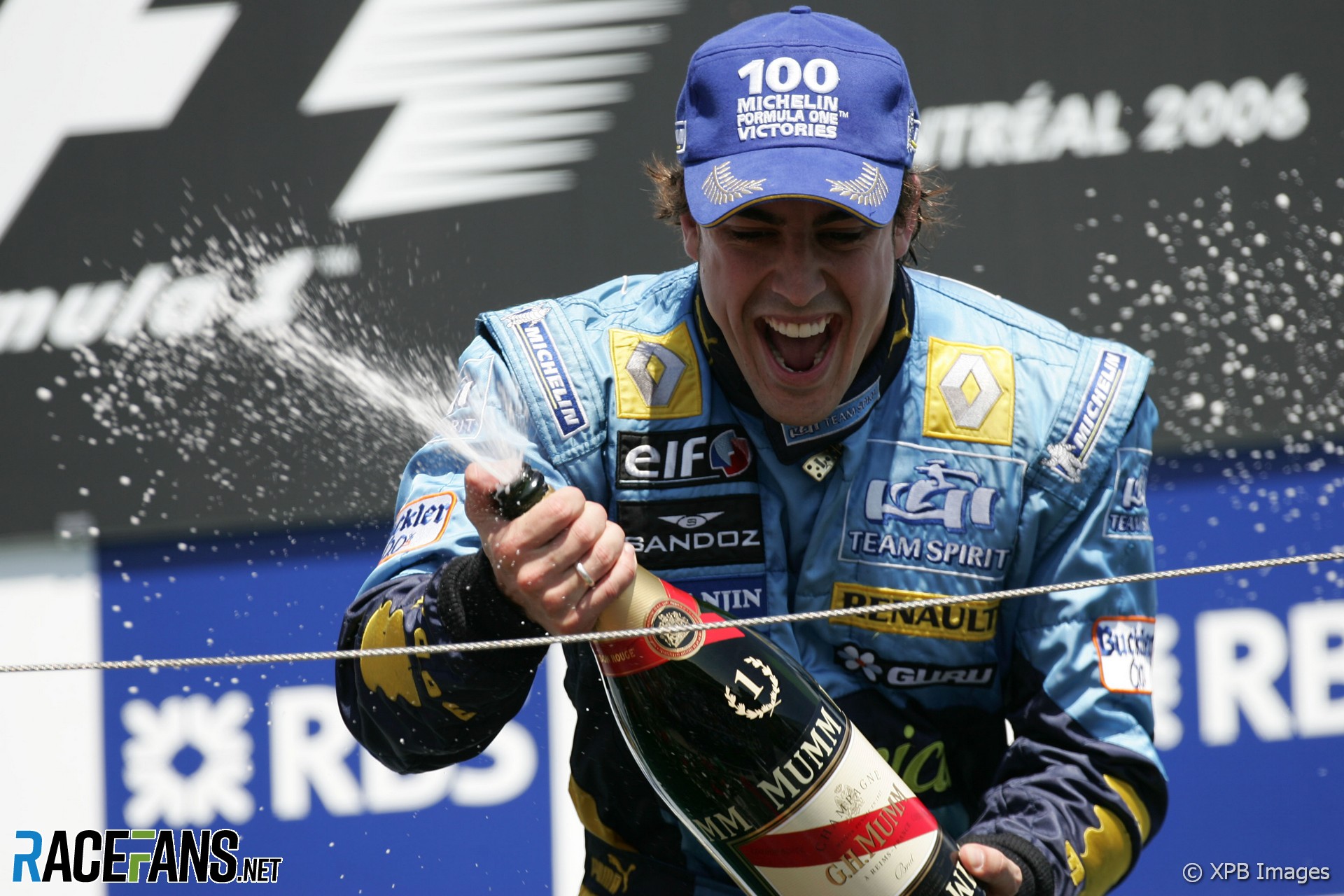 Fernando Alonso stretched his winning streak to four consecutive triumphs with an emphatic victory in Montreal. If he could be disappointed with any part of his day, it would be that Michael Schumacher took a somewhat fortunate second, so Alonso extends his championship lead by only two points.

The shape of the race was largely dictated by the deteriorating condition of the racing line as the cars shed huge amounts of waste rubber from their tyres during the race. At the Virage du Casino marbles of rubber encroached onto the racing line and claimed a number of drivers.

The race began with a Renault one-two, Alonso heading Giancarlo Fisichella. Fisichella jumped the start, and although he didn’t get ahead of Alonso, he was quickly summoned for the inevitable drive-through penalty.

Michael Schumacher had qualified fifth and seemed to dawdle on his way to his grid slot on the formation lap, perhaps trying to induce overheating in the leading Renaults. It did nothing for his start, as he was passed immediately by Nico Rosberg and then by Juan Pablo Montoya, who forced him onto the grass at turn three.

Rosberg twitched wide at the final chicane, allowing Montoya a run at him. Rosberg held the McLaren driver back at first, but when Montoya tried the same move on Rosberg that he had on Schumacher, Rosberg turned in and the cars touched. The Williams driver bounced into the barrier, and Montoya limped into the pits as the safety car took to the track.

Meanwhile Tiago Monteiro had hammered into team mate Christijan Albers at the Virage du Casino on the first lap. Monteiro was able to resume, but Albers was done for the day. Under the safety car, Franck Montagny’s Super Aguri ground to a halt.

The restart saw Alonso keep his lead from Kimi Raikkonen (who had passed Fisichella at the first start), Fisichella third, Jarno Trulli still fourth and Schumacher promoted back to fifth. Jenson Button and Jacques Villeneuve were sixth and seventh from eighth and eleventh respectively on the grid.

Fisichella’s stop-go penalty relegated him to fifth behind Schumacher. He closed in quickly but seemed reluctant to try to make a pass.

Montoya, 16th, had passed David Coulthard’s Red Bull before the safety car, and was now getting stuck into Ralf Schumacher’s Toyota. The McLaren driver cut the final chicane on lap nine, but squeezed past the Toyota there two laps later.

It was all to no avail though – Montoya’s frustration got the better of him on lap 14. He hit the famed ‘Wall of Champions’, and parked his car just after the pit lane.

Back at the front Raikkonen was showing surprising pace, even having a look at Alonso going into the final chicane on lap 11. Raikkonen looked even stronger when Alonso was the first of the leaders to pit on lap 23. The championship leader only dropped to third during his pit stop, because Trulli had fallen a long way back with Schumacher and Fisichella still tucked up behind him.

Schumacher broke free on lap 24, though, pulling alongside Trulli into the chicane, the Toyota driver braking extremely early and practically giving way to the Ferrari.

Next time around Raikkonen, Fisichella and Trulli all pitted – suggesting Alonso’s pole position was indeed aided by a lighter fuel load. Raikkonen suffered a poor stop as his mechanics struggled with the right-rear tyre; from being less than a second behind Alonso before, he was now 5.8s adrift.

Ralf Schumacher made his first stop on lap 26, but was called in for speeding in the pit lane two laps later. He certainly wasn’t doing much speeding on the track, compared to his team mate, as he lapped well off the pace with severe rear-end grip problems.

Ferrari team mates Schumacher and Felipe Massa had qualified fifth and tenth – and it transpired that this was because they had heavy fuel loads. Schumacher made his first stop of two on lap 32, and Massa’s sole stop of the day came on lap 36.

Once the first pit stops had all been made Alonso led Raikkonen by 7.8s, who in turn had a 20s gap to Schumacher. Fisichella languished 13.5s behind the leading Ferrari, and was lapping around three-quarters of a second slower than Alonso.

It was at this point that the difficulty the drivers were having with the amount of waste rubber on the track became clear. Raikkonen ran deep into the first corner and narrowly missed Monteiro. And Schumacher slithered wide at the final hairpin – his younger brother would repeat the mistake at least twice.

Raikkonen didn’t have has much pace in the second stint as he did in the first. His woes were compounded on lap 53 when, during his second stop, the engine died, wasting precious seconds. Surely then his thoughts turned from catching Alonso to holding off an advancing Schumacher.

Ralf Schumacher’s continued presence on the track in an obviously ailing Toyota was called into further question on lap 59. Jacques Villeneuve, who had driven commendably well at home, jinxed wide to lap him, hit the treacherous marbles of rubber, and then hit the even more treacherous wall coming onto the Pont de la Concorde. The safety car made its second appearance.

The stage was set for a thrilling run to the flag between the leaders. But Alonso had the lapped Trulli and Nick Heidfeld protecting his lead from Raikkonen, who in turn had Jenson Button and the Red Bulls of Christian Klien and Coulthard between himself and Schumacher. With Trulli apparently not ready for the restart, Alonso got away scot-free.

Virage du Casino was still claiming the unwary, though – Klien slithered off line and Coulthard capitalised. The Scot, who had started last, was now up to ninth and homing in on Button. The two Britons swapped places on lap 68 and Coulthard took the last points-paying place. Again Coulthard had gotten a better run out of the hairpin than his rival, passing Button on the long back straight.

But there was a final twist to come – Raikkonen was caught out at the hairpin as well, and Schumacher capitalised, giving him a somewhat lucky second.

At the finishing line, it was Alonso from Schumacher and Raikkonen, with Fisichella fourth and Massa a worthy fifth. Trulli finally broke his 2006 duck with three points for sixth place after a dogged drive. Heidfeld was seventh and Coulthard an excellent eighth.

Schumacher might have followed Alonso home, but Renault clearly maintain an upper hand at the critical midway point in the championship.

After the race, Alonso spoke of his “perfect weekend.” Two weeks ago, Ferrari were looking to the North American races to cut into the Spaniard’s advantage. But in the press conference at Montreal Schumacher instead talked of “limiting the damage.”

One comment on “Alonso edges further ahead with sixth victory”