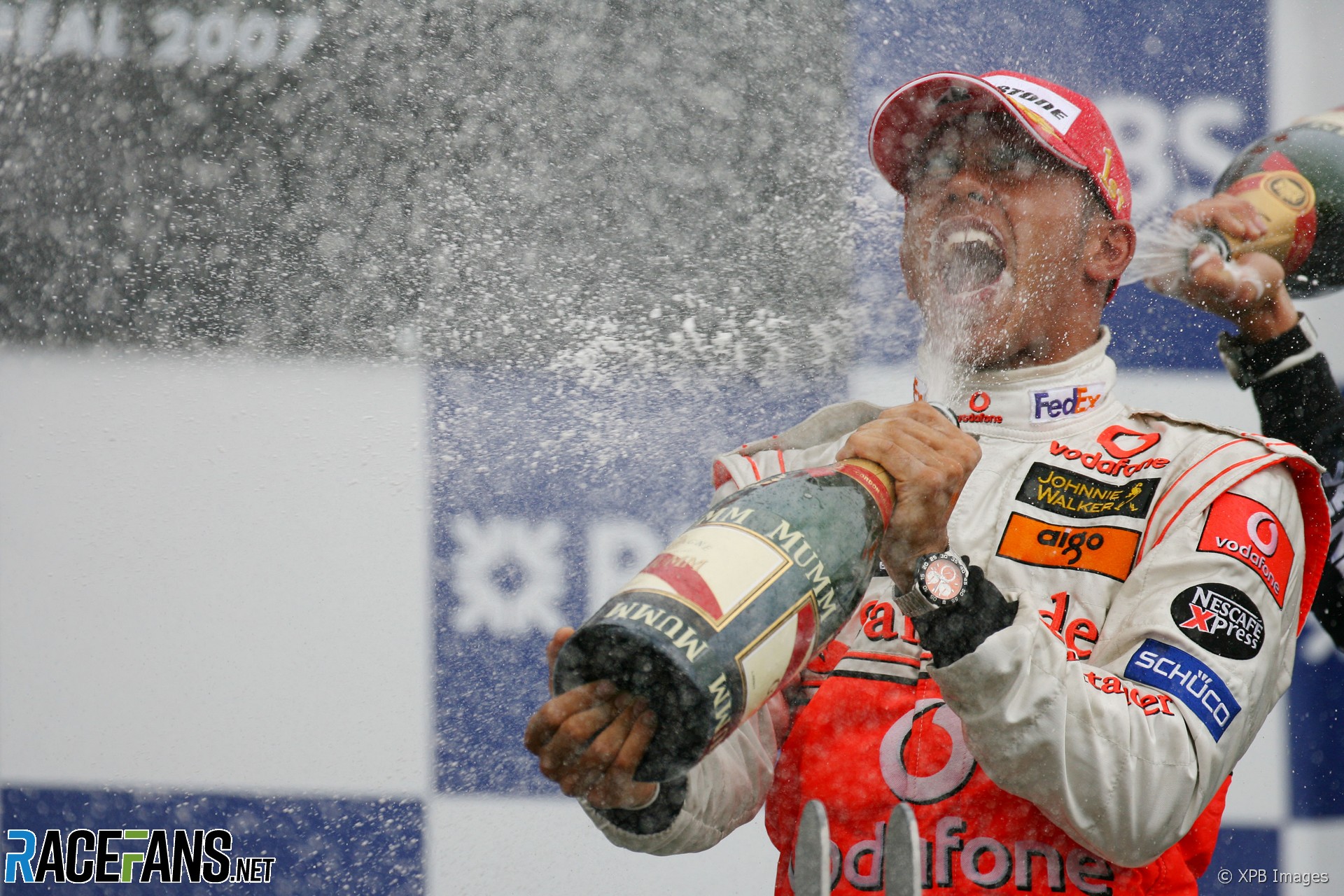 From his first F1 race three months ago it seemed like only a matter of time before Lewis Hamilton claimed his first Grand Prix win.

It was fitting that, when it came, his victory was a triumph of maturity and mastery over changing conditions in a complex race.

The Canadian Grand Prix was punctuated by a shocking accident involving BMW driver Robert Kubica, who was fortunate to survive a terrifying crash in which his BMW nearly cleared a safety barrier.

Lewis Hamilton’s skill in rapid getaways from the line seemed to desert him at the start – both Fernando Alonso and Nick Heidfeld were quicker away from the line. Hamilton was able to move left to cover Heidfeld but that left Alonso with a clear run into the lead.

Astonishingly, Alonso threw it away. In a repeat of his first corner error in Catalunya he went in too deep, bumped across the grass and crawled back onto the track. Only the tight configuration of the first two corners at Montreal prevented any more drivers than Hamilton and Heidfeld getting ahead.

Kimi Raikkonen got away slowly and Nico Rosberg cannily navigated his way around the outside of the Finn at the second corner. Raikkonen nudged the back of team mate Felipe Massa, who had moved up to fourth, but no damage was done.

The same couldn’t be said for Jenson Button, whose Honda was left on the line, stuck in gear.

Hamilton scorched off at a ferocious pace – but what was particularly surprising was that Alonso was not able to keep up with Heidfeld.

Mark Webber had lost three places at the start and tried to fight back by passing Kubica. He got ahead of the Pole at turn one but spun, dropping to 14th behind David Coulthard.

Not letting that get him down he quickly passed Coulthard on lap nine and the Rubens Barrichello two laps later.

There were plenty of battles throughout the field – but only Webber doing any successful passing. Even Heikki Kovalainen, who had started last, was unable to pass Scott Speed for 16th.

Kovalainen’s problem with Speed was solved when the American tried a move on Alexander Wurz from a long way back at the chicane after Pont de la Concorde. Speed broke his front-right wheel and pulled off. Wurz continued, albeit without the bottom right part of his rear wing.

The Montreal circuit was catching plenty of drivers out but the driver having the most problems seemed to be Alonso. He twice slithered off at the first corner, finally sacrificing third place to Massa.

Hamilton was leaving everyone standing. Lapping up to half a second faster than everyone else he had an 11.2s lead by lap 16.

The leaders’ fuel strategies became clear after lap 21 – Heidfeld was first to stop, falling to seventh, then Hamilton next time round, emerging fourth ahead of Raikkonen.

Adrian Sutil’s fine drive came to an end in the barrier at turn four on lap 22 – and that triggered a safety car period that threw everyone’s strategies into disarray.

Alonso, Rosberg and Liuzzi were already on the way to the pits when the safety car was called. But while Toro Rosso quickly got on the radio and told Liuzzi to stay out, Alonso and Rosberg came in. That broke the new-for-2007 safety car rules and sure enough both were issued with stop/go penalties.

When the cars were queued up behind the safety car the pit lane was open and eight drivers came in – Massa and Raikkonen (the Finn having to queue behind his team mate), Coulthard, Fisichella, Kubica, Trulli, Liuzzi and Albers. But video replays suggested at least two of them subsequently left the pits while the red light was on.

The race got back underway on lap 27 – but not for very long. Running down towards the Virage du Casino Kubica and a Toyota appeared to collide. The BMW continued onto the grass, the front of the car reared up and he hit the wall on the inside with massive speed.

Kubica’s car showered the track in debris and rolled past the entry to the hairpin, fortunately without hitting anyone. The safety car was out on track immediately and medical assistance rushed to the BMW.

After six laps the safety car returned to the pits and Hamilton left Heidfeld standing, stretching his advantage to 1.9s. Next lap it was 3.1s and the lead McLaren continued to stretch ahead.

Alonso and Rosberg came in together to serve their penalties on lap 37 and the world champion came back out in 15th, ahead of Trulli, and then Rosberg. Rosberg tried to pass Trulli around the outside of the first corner but both drivers spun off. They were able to get re-started, though Rosberg spent a short while battling with his anti-stall device.

After Alonso had pitted it left Hamilton leading from Heidfeld and Anthony Davidson’s Super Aguri. Unfortunately for Davidson he arrived in the pits on lap 38 to find no-one there, and dropped to 17th.

He was not the only Super Aguri driver to impress. When Raikkonen ran wide at Virage du Casino Takuma Sato drove past in a manner that reminded you of Michael Schumacher’s move on Raikkonen at the same place last year.

Coulthard’s race came to an end at the same time – he pulled into the Red Bull garage and retired.

Alonso meanwhile had scythed through the field. He took 12th from Wurz on lap 40, then passed Rubens Barrichello on the next lap. By lap 43 he’d passed Kovalainen for eighth.

Then he had a 20s gap to Raikkonen in seventh but he took care of that in no time, setting a new fastest lap on the 46th tour. By lap 50 he was with the Finn who, incredibly, was still behind Sato.

Heidfeld and Hamilton were still on their original strategies, having pitted before the safety car, and made their second stops on laps 48 and 49 respectively.

Amazingly, exactly the same thing happened again following their pit stops – a Spyker crashed and the safety car came out. Albers bounced across the grass at the third chicane, depositing dirt and several parts of his car on the track.

The third safety car period saw the first use of the new rule allowing lapped drivers to take a lap back – Rosberg was allowed past the safety on lap 53 to re-join the rear of the queue.

Massa and Fisichella’s races came to an end one lap earlier. Both had left the pit lane during the first safety car period while the red light was on – exactly the same infringement Juan Pablo Montoya had committed at the same venue two years ago.

At the same time the pit lane was opened and Raikkonen, Alonso and Schumacher came in. Alonso stayed glued to the rear of the Ferrari and ultra-rapid pit work by the McLaren team saw the Spaniard gain an advantage.

The race resumed for the third time on lap 55 and Alonso, Raikkonen and Davidson were instantly past Sato’s slow Super Aguri. Kovalainen got past Trulli and Alonso also had a run at the Toyota as the next lap started.

But Alonso once again went too deep into the first corner. By this time he must have worn a groove in the grass off the track. Both Raikkonen and Schumacher got past him.

Further back at the final chicane Liuzzi’s Toro Rosso was in the wall. This inevitably led to another safety car period – which was extended when Trulli crashed at turn one on his way out of the pits, even though the safety car was still out.

Finally on lap 60 the race could resume once more, with Hamilton still leading Heidfeld. Barrichello’s Honda was third, but he had to make his final stop on lap 63. This promoted Wurz to third, the Williams driver having cannily made an early switch to the softer rubber and not needing a final stop for fuel.

Alonso picked off Schumacher on lap 61 for sixth but then seemed unable to make further progress – possibly due to the short-life softer tyres failing to give enough grip.

Sato, running his last stint on the harder rubber, was pushing Schumacher very hard for seventh. After several unsuccessful efforts he finally got the Super Aguri down the inside of the Toyota.

But there was more to come from the Super Aguri. Underlining his pace on the harder tyres he caught and passed Alonso around the outside of the last corner.

The two McLaren drivers were at polar opposites of emotion. While Sato pulled out five seconds over Alonso, Hamilton was rounding the final corner for the final time.

He charged out of the chicane and over the line to howls of delight from his crew. After just six races, he scored a stunning victory on a day when fortune set a thousand traps for him to fall into.

Heidfeld came under pressure from Wurz in the dying stages but clung on to take a valuable second on a day of mixed emotions for BMW. Wurz’s third place was the perfect way to celebrate his ten year anniversary in F1.

Kovalainen finally had some fortune come his way and equalled Renault’s best finish of the year. Raikkonen could perhaps count himself fortune not to have been humbled by Sato the way Alonso and Schumacher were.

There were four more finishers on a day of extremely high attrition: Webber, Rosberg, Davidson and Barrichello.

But of the non-finishers, it was especially heartening to hear that Kubica’s condition was stable and that he was conscious. Formula 1 had a great day – and a narrow escape.

Addendum. ITV, after hyping Hamilton up to the eyeballs and spending the build-up talking about little else, ended their coverage within minutes of the flag with nothing in the way of analysis.