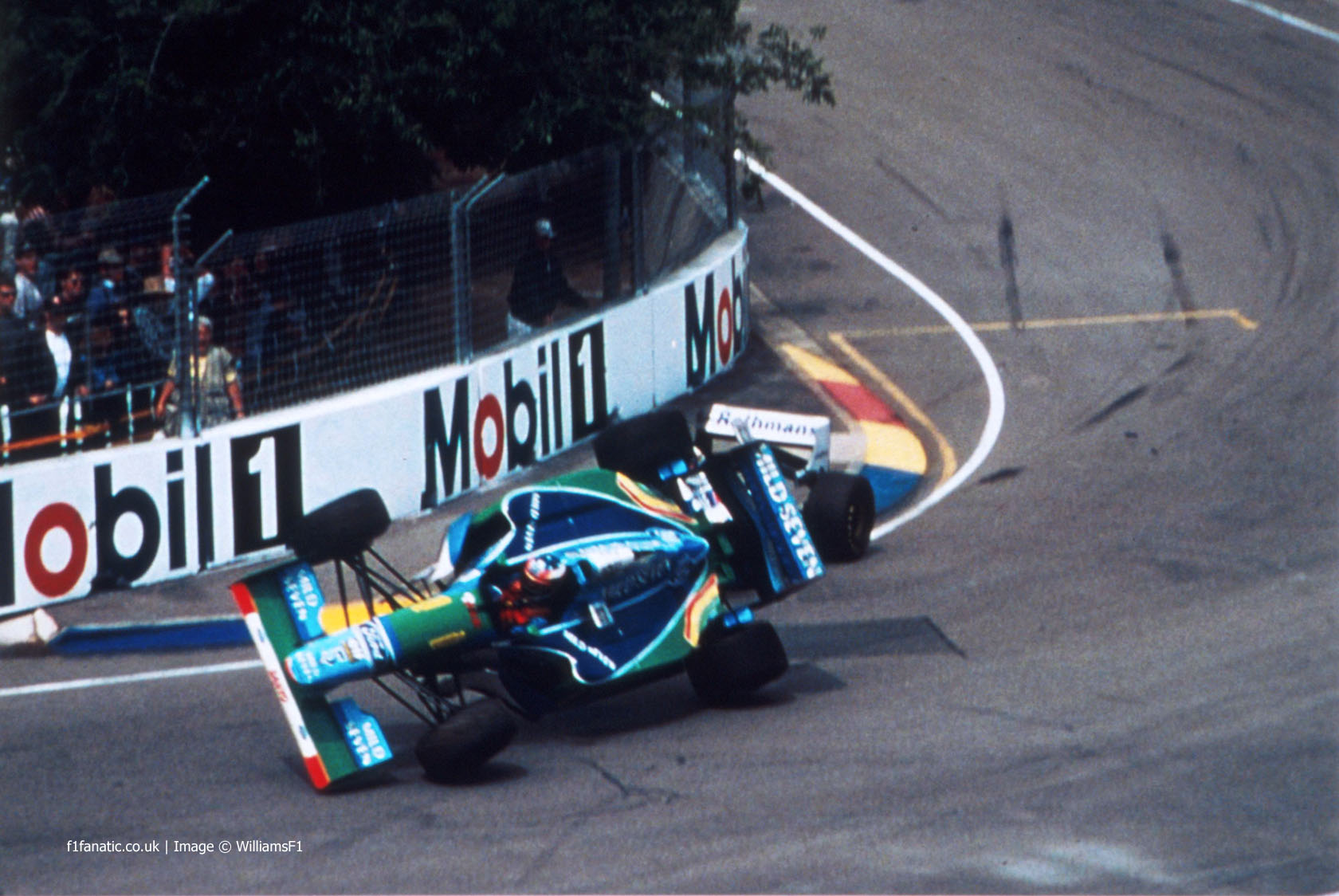 James Allen claims in his new biography of Michael Schumacher that FIA president Max Mosley believes Schumacher would have been stripped of his 1994 world championship under the current F1 rules.

Here’s what the book has to say:

According to Mosley, mitigating circumstances were missing in the case of Schumacher’s deliberate collisions with opponents later in his career. Schumacher got away with driving Damon Hill off the road in 1994, but if today’s systems had been in place then, Hill would have been awarded the championship.

But what were the ‘mitigating circumstances’? And what changes to the rules would prevent the same thing happening today?

Whenever he says something controversial Max Mosley has a complicated explanation. This one goes back to the collisions between Ayrton Senna and Alain Prost at Suzuka in 1989 and 1990.

In 1989, Prost deliberately collided with Senna to take the Brazilian out and win the championship. Senna was able to continue in the race but was disqualified for missing part of the course. Senna believed FIA president Jean-Marie Balestre sided with Prost.

In 1990 the championship situation was reversed and Senna won the title when he deliberately took Prost out at the first corner of the race at 120mph.

Twelve months later, by which time Mosley had usurped Balestre as FIA president, Senna admitted he crashed into Prost deliberately. Mosley gives two reasons why he did not punish Senna: Mosley claims he was not politically strong enough, and states he had defended the race director of the 1990 Japanese Grand Prix, John Corsmidt, when Balestre attacked Corsmidt over the second collision.

If Mosley did want to punish drivers who won world championships by crashing into their rivals, then why did he not punish Schumacher for colliding with Damon Hill in 1994? He cites ‘mitigating circumstances’ but it’s not clear what they are.

When Schumacher tried the same thing on Villeneuve in 1997 he was punished, but there was another crucial difference – he failed to take Villeneuve out and lost the championship anyway. (See video of the Senna, Prost, Schumacher, Hill and Villeneuve incidents.)

Many commentators (myself included) saw Schumacher’s punishment of disqualification from the 1997 championship as a meaningless slap on the wrist – why would he care about losing second place? But that changes if we believe Mosley would have applied the same punishment had Schumacher successfully taken Villeneuve out – i.e. Mosley would have stripped the world champion of his title.

Perhaps by ‘mitigating circumstances’ Mosley means the lack of an appeal from the Williams team after the 1994 collision. Following the controversy at Monaco last year, Williams stalwart Patrick Head shed some light on why they didn’t appeal at the time:

As far as Australia 1994 is concerned, Monaco 2006 doesn’t really make any difference. And that’s because, that day in Adelaide, we at Williams were already 100% certain that Michael was guilty of foul play. It was so blatant.

He was about to drive his stricken Benetton up the slip-road when he spotted Damon’s Williams about to pass him and abruptly veered across the track to prevent that happening.

We seriously considered lodging a formal protest there and then, on the grounds that it had been so blatant, but decided against it simply because of what had happened earlier in the year.

Because 1994 was the terrible year it was – in other words, because Ayrton Senna had been killed in one of our cars at Imola – we didn’t really think it would have been right for Damon to win the world championship that year, especially if he’d done so in court, so we didn’t protest.

But had it been any other year – or had Ayrton not been killed in one of our cars – then most certainly we’d have lodged a formal protest on the very grounds on which Michael was found guilty at Monaco in ’06.

This year’s championship is getting increasingly tense and controversial. It would be a shame to see it end in an acrimonious and cynical take-out – but if it did, should the FIA step in to award the title to the wronged driver?

24 comments on “Mosley: Schumacher would have lost ’94 title under modern rules”