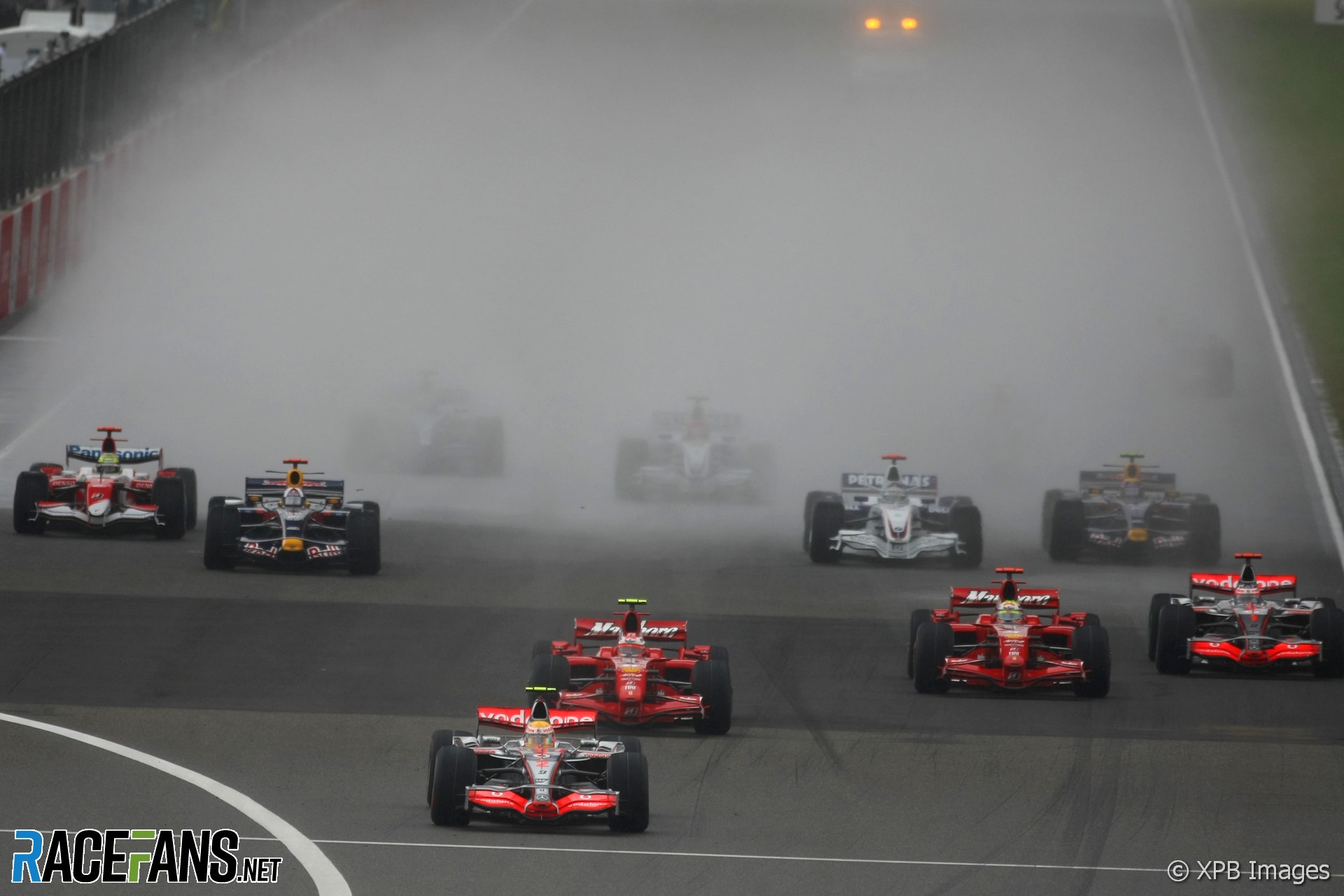 The F1 drivers’ championship will go down to the final race at Interlagos as Lewis Hamilton failed to score in Shanghai while title rivals Kimi Raikkonen and Fernando Alonso finished first and second.

Hamilton retired on his way into the pits after delaying his switch to slick tyres until it was too late.

That let through Raikkonen to lead Alonso home while Sebastian Vettel and Jenson Button finished well for Toro Rosso and Honda.

With typhoon Krosa in the region wet weather was widely predicted for the race and the teams had taken it into account before qualifying. But if anything many people probably expected more rain than the damp, greasy track that greeted the on race day.

But with more rain forecast to fall as the race was starting every driver on the grid opted for wet tyres – with the Spykers gambling on extreme wets.

Lewis Hamilton headed the field and made a clean start while his team mate Alonso got stuck into Felipe Massa. He squeezed past the Brazilian in the opening sequence of bends but Massa popped back up the inside of him at the following bend to take third.

As the cars funnelled into the slippery first turn Ralf Schumacher was squeezed out and spun. Jenson Button was briefly delayed and slipped down the order.

Hamilton increased his pace even as more rain fell, taking up to one second per lap off Raikkonen to take a 6.6s lead by lap nine.

Rubens Barrichello tapped Anthony Davidson into a spin at the start of lap two, causing damage to the Super Aguri that would eventually force the Briton to retire.

Vitantonio Liuzzi had made an excellent start, passing fellow Red Bull driver Mark Webber for seventh at the hairpin on the first lap. He moved up to six behind David Coulthard on lap four by passing Nick Heidfeld.

The rain fell for around five laps before easing and soon afterwards the drivers were running across the damper sections of track to cool their tyres. Raikkonen had begun to get on terms with Hamilton but not before the gap had increased to nine seconds.

Part of Hamilton’s pace was explained by his early first pit stop, which came on lap 14. Now Raikkonen let rip, setting a string of new fastest laps before his stop on lap 18, after which he emerged from the pits four seconds behind Hamilton.

Massa made his pit stop on lap 16 and Alonso came in on the next lap, just failing to get out of the pits ahead of the Brazilian. None of the drivers thus far had changed their tyres, preferring to keep hot, worn intermediate tyres on their cars.

Schumacher mounted a fight back after his earlier problems, passing Button for 14th on lap 16 and then taking Kovalainen around the outside of turn one just a few corners later.

By lap 21 he was up with Nico Rosberg and took 12th. But his charge was halted when he tripped over Liuzzi on the next lap. Three laps later the rain began to fall again and after another spin at the final turn he puled into the pits and retirement from what could be his penultimate Grand Prix.

The return of rain caused a major headache for most of the runners. Up front the leaders who had lapped the quickest had the least life left in their tyres – including Raikkonen bust most of all Hamilton.

Several drivers further down the field had begun switching to dry weather tyres and found the conditions were briefly in their favour – Alexander Wurz setting the fastest lap of the race so far on lap 23.

As the rain eased again Raikkonen was consistently and substantially faster than Hamilton, taking 2.5s off him on lap 27 to cut the lead to less than a second. Hamilton defended boldly for as long as he could but his tyres were clearly not equal to the task, and Raikkonen scrambled past on lap 28.

Further back Alonso was released when Massa pitted for dry weather tyres on lap 26, and the Spaniard was lapping faster than both of the leaders. He took 3.7s off Hamilton lap 29, by which time it was becoming clear that Hamilton was in severe tyre trouble.

The white tyre canvas was becoming visible on the right-rear tyre of the Briton’s McLaren, and he struggled to put Jarno Trulli’s Toyota a lap down. Still he stayed on track and on lap 30 he lost 7.7s to Alonso.

In the light of what happened next it’s easy to criticise McLaren for not pitting Hamilton earlier. For when he finally came into the pits with his rear tyres in shreads he understeered wide on the corner leading into the pit lane, and came to rest in a tiny gravel trap on the outside of the corner. He gestured for a push and received none, and the championship leader was out of the race.

His team had been preparing dry weather tyres for him, and that was what Raikkonen came in to switch to on the very next lap, followed by Alonso on lap 32. Alonso came out of the pits right behind Massa, who had stuck with his dry weather tyres during the brief rain, and kept the Ferrari driver at bay.

Those pit stops put Robert Kubica’s BMW in the lead of the race, but only for a heartbreaking few minutes. His car failed him, and he thumped the steering wheel in frustration as the BMW coasted to a halt.

Several drivers accustomed to finishing towards the rear of the field gambled on the weather conditions and saw their numbers come up. One of them was Jenson Button, who on dry weather tyres set the fastest lap of the race on lap 33 having taken sixth.

But if Button and Honda had called the conditions well, Vettel and Toro Rosso did it perfectly, switching to slicks and fuelling to the end of the race at exactly the right moment. Vettel took fourth place back when Button stopped for more fuel on lap 42.

Alonso settled in behind Raikkonen but couldn’t find the pace to attack the Ferrari. Massa slipped back from Alonso too, and the top three were set until the end.

Wurz, who had made an early switch to dry weather tyres, took sixth off Liuzzi on lap 35, but fell out of the points scoring positions when he pitted on lap 37.

Fisichella’s last pit stop on lap 46 dropped him out of the points as well and set the finishing order, promoting Button to fourth.

Raikkonen’s victory gave Ferrari their 200th championship win and kept his slender hopes of winning the championship alive. But the real winner in the championship race was Alonso, whose second place moves him within four points of Hamilton.

Massa took third and Vettel bounced back from his disappointment at Fuji to take fourth. He and Liuzzi, sixth, broke Toro Rosso’s points duck. Between the pair was Button, whose four points for fifth puts Honda ahead of Super Aguri, although they also fall behind Toro Rosso.

Nick Heidfeld was seventh on a day when once again BMW failed to capitalised on mixed conditions. Coulthard hung onto eighth ahead of Kovalainen.

Hamilton’s lead is cut to four points over Alonso, with Raikkonen just three points further behind. It will be a three-way fight for the title in Brazil.