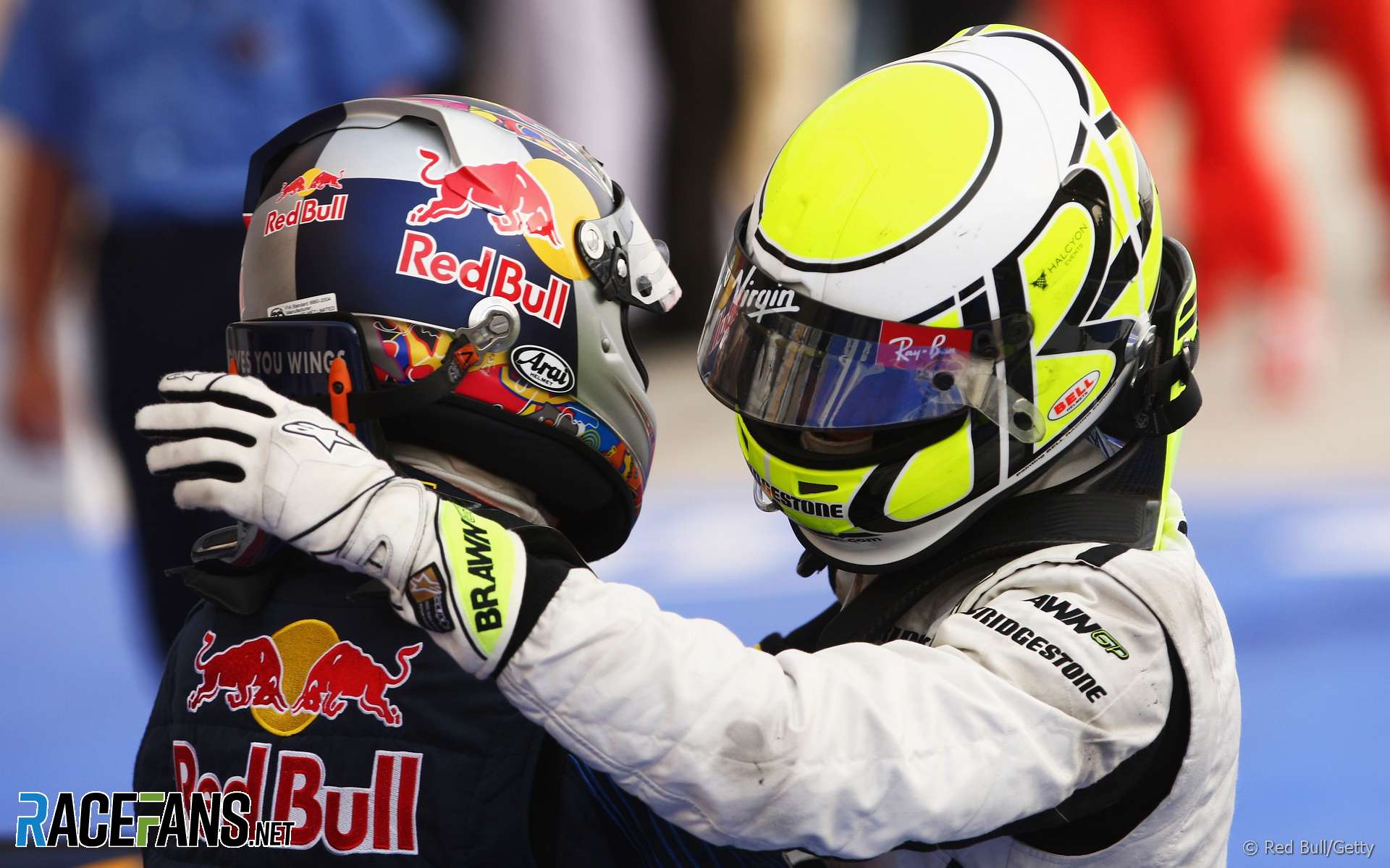 Jenson Button scored his third win of 2009 after fighting through from fourth on the grid.

[retrompubrawn01]He made up crucial ground in the early stages of the race, passing Sebastian Vettel and Lewis Hamilton, putting himself in a position to take up the lead after the lightly-fuelled Toyotas had pitted.

Sebastian Vettel minimised the damage in the drivers’ championship by taking second, while Jarno Trulli finished third after starting from pole position.

Frantic starts are becoming the norm in 2009, and this one had a huge role in determining the outcome of the race.

Lewis Hamilton scorched past Button and went down the inside of Vettel to take third. Button fought back, taking Vettel around the outside for fourth, defending strongly on the run-up to turn four.

Next Hamilton took on Trulli, but the McLaren ran wide, losing its grip on second place.

With the field compressing so tightly at the first corner contact was inevitable, and Felipe Massa, Kazuki Nakajima and both BMWs both ended up heading to the pits for new front wings – Robert Kubica having had his knocked off by team mate Nick Heidfeld. Kubica made things worse by missing the pit call first time around and not making it in until the end of the second lap.

As lap two began Button caught Hamilton’s slipstream on the start/finish straight and slipped past at the first corner. This proved the critical moment of the race, as Button was able to set off after the Toyotas while Vettel languished behind the McLaren.

Mark Webber had a remarkable getaway from 18th and got up to 11th within a couple of laps. But crucially, he couldn’t find a way by Nelson Piquet Jnr despite the Renault driver having over 20kg more fuel on board.

Despite having a lighter fuel load Glock struggled to open up a gap over Trulli. The German pitted on lap 11, and his team mate was in the next time by, letting Button through into the lead.

Button didn’t have to make his first pit stop until lap 15. Hamilton came in on the same lap, handing the lead to Vettel, though the Red Bull had been over 10 seconds behind Button beforehand.

Button and Hamilton both took on another set of super soft tyres, unlike the Toyotas, which had switched the medium compound for their long middle stints. That stategy failed, with Glock slipping far down the order, though Trulli fared rather better.

Barrichello and Webber came in on lap 14, the latter having failed to get ahead of Piquet. Barrichello’s stop now left him behind Piquet, but he found a way by the Renault and, on lap 20, took Glock for seventh.

Vettel stayed in the lead until lap 19 when he pitted. He resumed behind Trulli and couldn’t get close enough to pass the Toyota and reveal his true pace. This played into Button’s hands brilliantly when the Brawn driver resumed the lead following Raikkonen’s pit stop on lap 21.

By the halfway point in the race Button had a nine second lead over Trulli, with Vettel and Hamilton within 1.2s of the Toyota. Barrichello was four seconds back but catching them quickly, Glock already 9.4s behind.

As Barrichello came within range of the three-car train Brawn elected to change his strategy to avoid him being delayed by the trio. On lap 26 he was in the pits for a second time, risking his race on a three-stop strategy.

It didn’t pay off. When Trulli finally pitted on lap 37 he came out ahead of Barrichello, and although Barrichello passed his rival the Toyota driver quickly reversed the move.

Hamilton had come in on the same lap, his team mistakenly believing that Trulli was fuelled two laps shorter. Button also pitted, putting Vettel back in the lead. The Red Bull driver had just two laps left in the tank, but it was enough for him to put in a couple of quick laps and leap past Trulli after his return to the pits on lap 40.

Barrichello’s final stop on lap 47 dropped him to fifth behind Hamilton, where he finished.

After an exciting start to the race the final laps were fairly settled.

Trulli switched back to the super-soft tyres for the final phase, but couldn’t use them to get ahead of Vettel.

Hamilton ended the race fourth, but encouragingly for McLaren only 22s behind Button’s Brawn, a marked improvement over their earlier performance.

Raikkonen was sixth behind Barrichello, finally putting some points on the board for Ferrari, with Glock a disappointing seventh after leading. Alonso took the final point.

Nico Rosberg was ninth, almost a minute behind Button after an anonymous weekend for Williams. Team mate Kazuki Nakajima was the only retirement of the race, Williams choosing to retire his FW31 as its oil pressure was running high.

Nelson Piquet Jnr finished tenth, 13s behind Alonso and a much-needed improvement for the under-fire Brazilian. He successfully thwarted Webber’s recovery drive after his qualifying woes, consigning the Red Bull driver to 11th.

An early pit stop to replace a damaged tyre spoiled Heikki Kovalainen’s race – he finished 12th. Sebastien Bourdais was 13th ahead of Massa, who also came into the pits early after his KERS developed a problem.

He also survived a brush with Giancarlo Fisichella after the Force India driver turned in on the Ferrari at turn 11. That sent Fisichella off the track, and he returned in time to worry leader Button, who gave the VJM02 a wide berth as he lapped it.

The second Force India of Adrian Sutil was 16th, beating Sebastien Buemi’s Toro Rosso in a straight fight. After their collision on the first lap the BMWs finished last, 18th and 19th.

Button complete a straight run of podium finishes in the ‘flyaway’ race to put him in a very strong position as the championship heads back to Europe. Several teams are planning to bring new components to Barcelona, and we could see another shake-up of the running order. Until then, Button and Brawn are the team to beat.

Driver of the race

My pick for driver of the day is Jenson Button following his excellent passes on Sebastian Vettel and Lewis Hamilton which won him the race.

Your picks for driver of the day via Twitter:

Chittaranjan Button & Vettel always had da pace. Kimi, I think did well 2 bring ‘some’ pts. Esp. after his nick with Massa at da start.
MartinB1884 driver of the day for me was Button but honourable mention to lewis.
Handbag_Junkie Drive of day has to be Button, passing Lewis without benefit of KERS. Also must mention Piquet in 10th only 2 behind Alonso
RDFGrant got to be Raikkonen for driver of the day. He showed real hunger and excellent pace throughout to finish ahead of Glock.
aimi_g driver of the race is a close call between button and trulli for me, button had a brill race, and trulli kept up well.
somefool I’d have to go with Button. As that said on comms, won on first lap.
adamsapples Button all day long
brodyberg driver of race: raikkonen, took bad car to points and attacked and defended on the way about
noelinho No-one really sticks out today. Kimi, Fernando or Webber. perhaps?
MarkF1 without question it is Button.
GeneralKonsens button was great vettel very solid too

Who’s your driver of the day? Have your say in the comments.