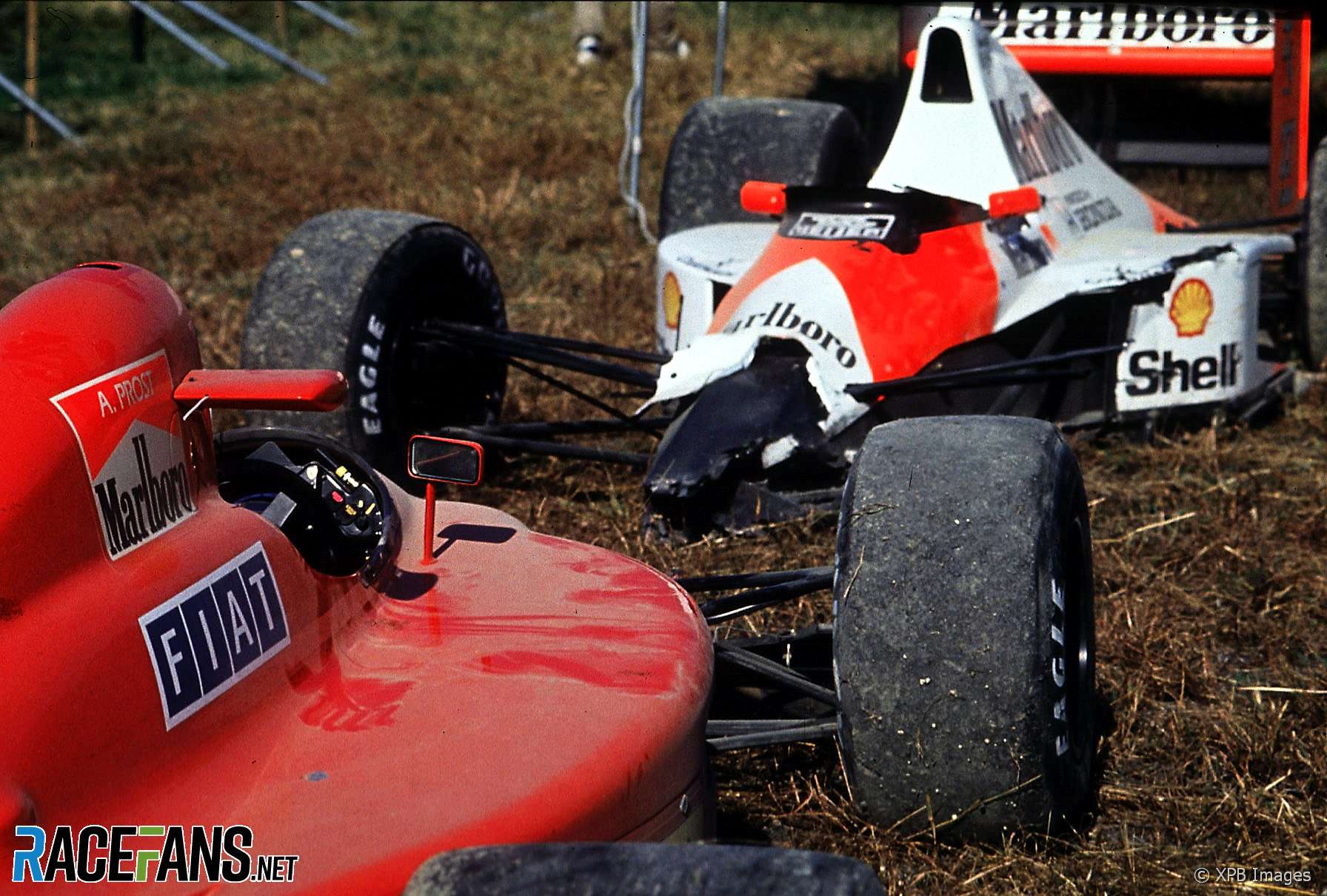 One of the most notorious moments in F1 history happened 20 years ago today.

Ayrton Senna clinched the 1990 world championship in a deeply controversial Japanese Grand Prix. He rammed into rival Alain Prost at the first corner at Suzuka, taking both of them out of the race.

For the third year in a row F1 arrived in Japan with the same two drivers in the thick of the championship fight: Ayrton Senna and Alain Prost. Once again, Suzuka decided the outcome of their personal battle.

Senna claimed the 51st pole position of his career, a feat that was central to the weekend’s controversy. Pole position at Suzuka had been on the right-hand side of the track – off the racing line – for each of the three previous F1 races at the track.

Senna had started there in 1988, bogged down badly, fallen to 14th, yet recovered to win the race and the drivers’ title.

He started there again in 1989 and as he struggled for grip at the start Prost charged into the lead from second place. Senna caught and tried to pass his rival at the chicane later in the race, but Prost swerved into the side of Senna’s car, taking both out, denying Senna the championship.

Before qualifying for the 1990 race had even begun, Senna lobbied track officials for pole position to be moved to the left and onto the racing line. He believed he’d got their consent – but after claiming pole position he was told he would start from the right-hand side of the track once again.

Senna saw the hand of FISA president Jean-Marie Balestre in the decision. The same person he blamed for his disqualification from the 1989 race, after he had disentangled his car from Prost’s and driven through the run-off at the chicane to re-join the track.

In the drivers’ briefing before the 1990 race the drivers were told they would not be disqualified for using the run-off at the chicane, as Senna had 12 months previously. He stormed out of the room:

Jean Alesi, Tyrrell-Ford, qualified seventh but withdrew from the race weekend due to injuries sustained in an accident during practice.

Over in nine seconds

As the race started Prost instantly pulled ahead of Senna and into the lead. Senna briefly tucked in behind his rival.

Turn one came up on them quickly. Prost moved towards the middle of the track, then feinted back to the left as Senna lined himself up for a look at the inside.

Prost lifted the throttle and turned into the corner. Senna slammed into his right-rear wheel at a speed of no less than 130mph, probably much higher.

The two wrecked cars hurtled into the gravel trap where they were briefly obscured by a cloud of grit. As the dust settled two figures climbed from their cars and made their way back to the pits separately.

Senna asked: “They’re not stopping the race, are they?” and was told they weren’t. With that, he was the 1990 world champion.

A race to forget

As lap two started the other McLaren of Gerhard Berger joined Senna’s in the gravel trap at turn one. Berger, who had inherited the lead, slid sideways off the track and out of the race.

That promoted Nigel Mansell into the lead. He ran around at the head of the field unchallenged for the first half of the race, gradually leaving Nelson Piquet’s Benetton behind.

The only prospect of a competition for the lead arose from the fact that Mansell would have to change tyres and Piquet, who had started on a harder compound, wouldn’t (there was no requirement to use two compounds of tyre during a race then).

But Mansell never made it out of the pits after coming in on lap 27. Once again, the Ferrari’s semi-automatic transmission let him down.

His ninth retirement from 15 starts ended Ferrari’s hopes of winning the constructors’ championship. For the third consecutive season the trophy went to McLaren.

Piquet now held an unchallenged lead. Alesi, who had been due to start behind the Benetton driver, was left to wonder what might have been.

Behind Piquet was his new team mate Roberto Moreno, who had been drafted into Benetton after Alessandro Nannini lost his arm in a helicopter accident.

Moreno had spent the year up to that point campaigning the hopeless EuroBrun, qualifying just twice in 14 attempts, and admitted it had been quite an adjustment to get used to the higher levels of downforce the B190 offered.

The Brazilian driver wept after taking the chequered flag behind his compatriot. Piquet’s victory ended his own three-year win drought and headed Benetton’s first one-two.

The early demise of the two Honda-powered cars did not end local interest in the race. Aguri Suzuki took the final podium place, the first Japanese driver ever to finish in the top three in a world championship event.

The Lola driver used his extensive local knowledge of Suzuka to qualify ninth on the grid. He picked off Derek Warwick early in the race and, running to the end without making a pit stop, inherited places from both the Williams drivers to claim third.

Satoru Nakajima made it two Japanese drivers in the points by bringing his Tyrrell home sixth.

The aftermath of the crash

What drove Senna to commit one of the most outrageous acts ever witnessed in Formula 1? His frustration with the sport’s governing body – Balestre the focus of his fury – combined with a growing sense of desperation that the championship was slipping away from him.

The Ferrari F1-90 had clearly been quicker than the McLaren MP4-5B in the previous two races.

Senna knew he had been fortunate to take points off Prost at Estoril. At Jerez Prost had out-manoeuvred Senna in the pits, driven away from him on the track, and to make matters worse a damaged radiator left Senna point-less.

Heading into the two remaining races Senna had a nine-point lead over Prost in the championship. There were nine points available for a win, then 6-4-3-2-1 for the remaining places, but drivers could only count their 11 best scores, making the situation more complicated.

It’s likely two things were weighing on Senna’s mind: if Prost won both the remaining races, there was nothing Senna could do to stop him from being champion.

But if Prost failed to finish one of the remaining races, Senna would definitely be champion.

It’s not hard to imagine how the row over the location of pole position affected Senna’s state of mind. As he walked back to the pits following the crash he told reporters that was the reason why the collision had happened.

When F1 returned to Suzuka in 1991 pole position had been moved to the left-hand side of the track. Senna won his third world championship that weekend, and in the press conference afterwards launched into a tirade against Balestre:

I said to myself, “OK, you try to work cleanly, and you get ****** by certain people. All right, if tomorrow Prost beats me off the line, at the first corner, I will go for it and he better not turn in because he’s not going to make it.” And it just happened.
Ayrton Senna

Following the Suzuka collision in 1990 a furious Balestre told the world:

It is a scandal that a world championship should be decided on such a collision and I leave everyone to be their own judge of who is to blame.
Jean-Marie Balestre

It’s true that what Senna did to Prost in 1990 only differed to what Prost did to Senna in 1989 by degrees. In principle, Prost’s actions were every bit as cynical as Senna’s.

And by allowing Prost to go unpunished after taking Senna out of the 1989 title-decider, what could FISA do about Senna in 1990? According to Balestre, nothing:

Last year the race stewards disqualified Senna because he cut short a chicane. This time, they told me on the telephone, that there were no elements to allow Senna’s disqualification.
Jean-Marie Balestre

The governing body’s failure to act against a championship-deciding crash in 1989 left them powerless in 1990.

More followed in later years, courtesy of Michael Schumacher, in 1994 and (unsuccessfully) again in 1997. Since then Balestre’s successor Max Mosley has suggested the FIA would step in were it to happen again but that has not yet been put to the test.

The extreme tactics Senna was prepared to used to win the world championship – risking his own life as well as Prost’s and potentially others’ – was not lost on his arch-rival, who said:

I’m not prepared to fight against irresponsible people who are not afraid to die.
Alain Prost

The horrendous consequences which Senna’s actions could have had were demonstrated in a tragic crash two years later.

Hitoshi Ogawa and Andrew Gilbert-Scott collided at the same corner during a Japanese Formula 3000 race in 1992, at comparable speeds to Senna and Prost, perhaps a shade higher.

Ogawa was killed when his car was launched over the barrier. Gilbert-Scott, a cameraman and two photographers were also injured.

On many other days Senna’s otherworldly driving ability – not to mention his intense personal charisma – won him legions of supporters. His greatest drives have inspired a further generation of fans since his death.

But there was a dark side to his character which the events of October 21st 1990 make impossible to ignore.

His life is the subject of a new film documentary, already released in Japan, which is due to open in many other countries next year. Surely the most difficult chapter of his life to relate is the actions that made him the 1990 world champion.

Did you see this race?

Were you at the 1990 Japanese Grand Prix? Did you watch it live? If so, please tell us about it in the comments.