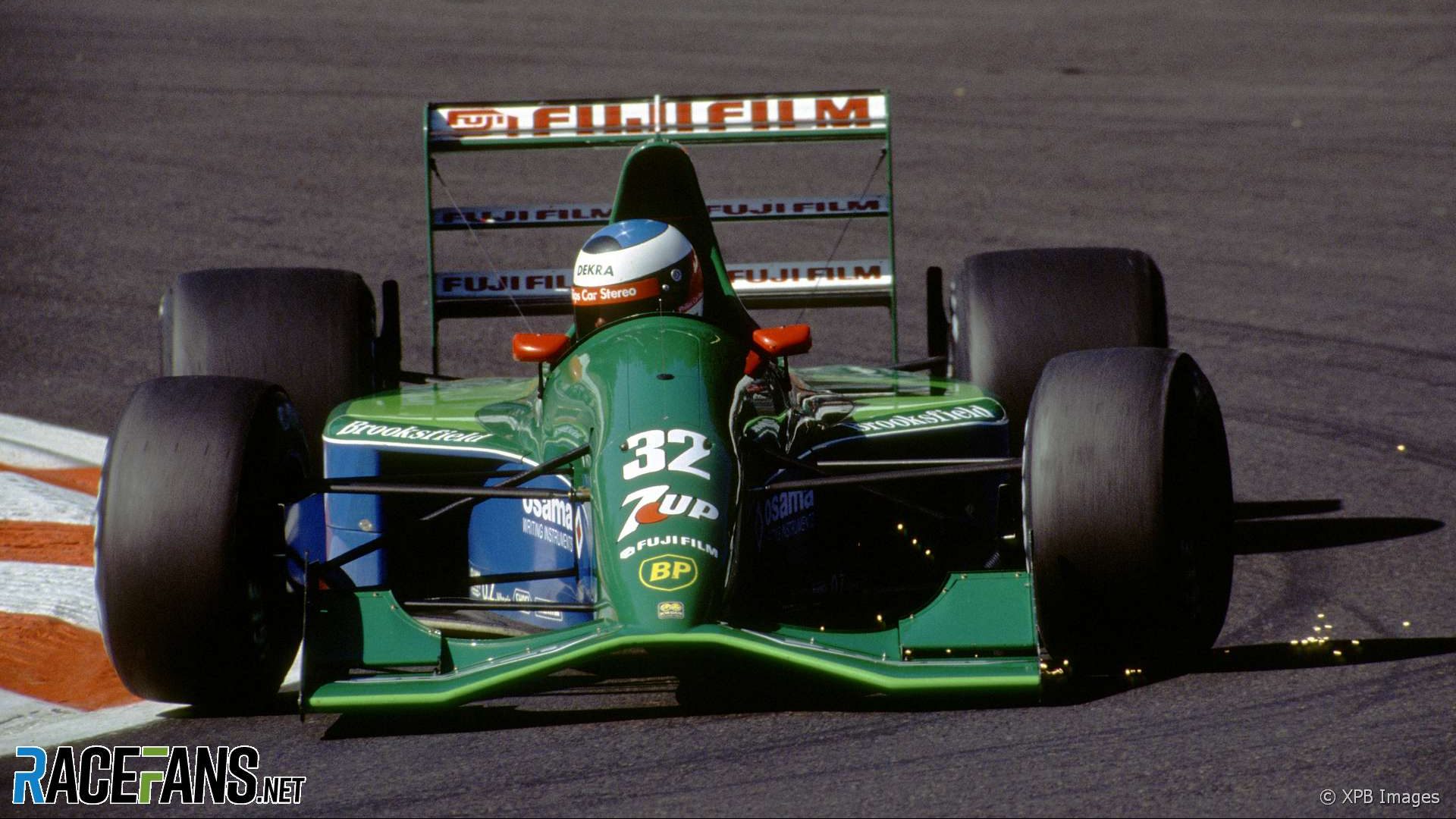 He stunned the F1 world by putting the car on the fourth row of the grid but his first race lasted less than a lap.

It was a bittersweet weekend for Jordan as the other car came close to winning the race.

Jordan entered Formula One at the beginning of the 1991 season with Andrea de Cesaris and Bertrand Gachot.

The team had begun the year well, scoring points with the effective at attractive 191. Gachot had set the fastest lap in Hungary, but just two days later he was in court in Britain.

Six months earlier, Gachot had sprayed a taxi driver named Eric Court with CS gas following an argument. He was expected to receive a fine or suspended sentence for the offence and was scheduled to fly after the hearing to a tyre-test session at Monza.

But the judge found him guilty, and although his sentence was later reduced, he had to spend nine months behind bars. The Belgian Grand Prix was a week away, and Jordan had lost a driver and a significant source of sponsorship money.

“Someone had to stand on the track and stop him”

But Eddie Jordan wanted to go with 1982 world champion Keke Rosberg, for the credibility he’d bring to the team, despite Rosberg having retired five years previously. Stefan Johansson and Derek Warwick were also considered, but all three expected payment, so the team kept looking.

Schumacher, then 22 years old, was in his second season of Group C racing with Mercedes. He was developing a reputation thanks to strong performances in the World Sportscar Championship alongside Karl Wendlinger.

When his manager Willi Weber heard the news about Gachot, he pounced. In Timothy Collings’ The Life of the new Formula 1 Champion, Weber said: “Eddie wanted to know if he had ever driven at Spa, so I told him ‘I think about 100 times’, which was a complete lie, because Michael was never at Spa before!

“He said he wanted time to think it over, but I didn’t give him any. I called him every hour.” A fee of £80,000 was agreed upon for a test at Silverstone that week.

“He was absolutely on it from the word go”

Mark Gallagher, who is now in charge of Cosworth’s F1 operation, was present at Schumacher’s first F1 test, and told F1 Fanatic what unfolded: “The few of us in what was a very small team headed down to the South Circuit at Silverstone.

“I stood at the Armco and saw him go out and, more to the point, listening to him go out because he was absolutely on it from the word go.

“Where the cars exited between the Armco barrier was actually a little chicane. He lost it on his first flying lap coming into the chicane and we thought we were witnessing a shunt. But he caught it and floored it and basically went through the chicane sideways rally car-style. Pretty impressive.”

Schumacher was asked to do a few installation laps but stayed out for seven: “The only way they got him to stop was someone physically had to walk onto the track and stand in front of him and get him to come in,” remembers Gallagher.

“He was really enjoying himself – and proving a point. He was very quick and within a few tenths of a second of the best time we’d seen on the South Circuit.”

Schumacher was confirmed as the second driver for Spa. The price was £150,000 and Mercedes confirmed they would guarantee the money, with help from sponsors Dekra and Tic Tac.

The start of the race weekend was dominated by the news of Gachot’s conviction. “There was a great hullabaloo when we turned up because all the attention was on Gachot not being there,” says Gallagher.

“All the drivers were wearing white T-shirts with protest messages: ‘Let Gachot go’ and ‘Let Gachot out of jail’.” Similar messages had been scrawled by fans on the track.

After two laps of the track under pedal power, Schumacher and his manager headed off for the evening. No accommodation had been provided for them so they stayed at a youth hostel just outside Spa.

Friday practice came and Schumacher was immediately on the pace. He ended the day eighth-fastest on a track he had never driven before.

He was also two rows ahead of his veteran team-mate. Gallagher says, “That was notable because, obviously, de Cesaris was no slouch. And for Michael to arrive at a driver’s circuit like Spa and do such a good job was terrific.”

The race morning warm-up boded well for the race as Schumacher went fourth-fastest.

When the race started he got away well and was already up to fifth, passing Jean Alesi and Nelson Piquet – the latter was so surprised he thought Schumacher had jumped the start.

But suddenly it was all over. Going around the La Source hairpin the first time, Schumacher had dipped the clutch to keep the car from understeering. But bringing it up again so soon after the initial start proved too much for it, and the clutch disintegrated. He coasted to a halt at Raidillon.

“We nearly won the thing”

Up front, Senna fended off Prost at the start while Mansell stalked the pair of them. Prost’s race didn’t last much longer than Schumacher’s – his engine died on lap three.

Mansell followed Senna until the McLaren driver pitted for tyres on lap 15. It was a slow stop, and Senna found himself having to defend from de Cesaris when he came out.

Mansell’s pit stop left him behind Gerhard Berger, who he quickly passed to take the lead. Berger’s pit stop went more smoothly – but he spun as he rejoined the circuit.

That left Mansell in a comfortable lead – but it only lasted three laps, when Alesi passed him for the lead at the bus stop chicane. A voltage regulator had failed on the FW14, and Mansell retired.

Alesi held the lead until lap 29 but his Ferrari couldn’t go the distance either. Not unusually in 1991, it was the V12 engine that failed, further postponing Alesi’s maiden race win.

Senna was back in the lead again and behind him was a three-way battle for second place between Piquet, Patrese and de Cesaris. Patrese took Piquet but slid off at Les Combes, handing the place back and allowing de Cesaris through as well.

While the marshals were attending to Alesi’s smoky Ferrari at Raidillon, de Cesaris flashed past under Piquet’s rear wing. He ducked out and passed the Benetton – with its superior specification Cosworth engine – at Les Combes.

The sole remaining Jordan was now in second place – and closing in on Senna, who suddenly lost eight seconds with a gearbox problem. “My goodness, we’re going to win the race,” thought Gallagher at the time.

But de Cesaris, in his 160th race, was struggling with problems of his own. His Cosworth V8 was running out of oil. With three laps to go, and Senna just three seconds ahead, the engine died on the approach to Pouhon.

Patrese was in trouble too. Having taken second off Piquet he slipped back and was passed by Berger. Piquet took third place back and was followed home by Roberto Moreno, in what turned out to be his final race for Benetton.

It was a precious win for Senna, who had responded to Mansell’s mid-season surge with a pair of wins that put him 22 points clear with five races remaining.

“I have a younger brother, he’s even quicker than I am.”

Had his car kept going – and, for that mattter, had Schumacher’s, who knows what kind of result Jordan might have pulled off.

“I remember Prost saying there was only one car on the grid that was impressive to follow through a quick corner and that was the Jordan, because the diffuser worked so well on that car.

“The car was amazingly quick, a real testimony to the work that Gary Anderson and his team of three design engineers had done in 1990 with Mark Smith and Andrew Green. They came up with a very simple car, very easy to work on. Mechanically excellent, good traction, fantastic aerodynamics.

“And around a track like Spa, Schumacher, as we found out in subsequent years, was something of a Spa ace. Around Spa, he was able to make the most of that 191’s aerodynamic and mechanical stability.”

There was, of course, a sting in the tail, as Benetton poached Schumacher before the next race. Schumacher’s associated with Jordan lasted just 17 days passed. Schumacher’s ascendancy was rapid – he scored his first F1 win on his return to Spa the following year.

In 1991 he told Gallagher to be on the lookout for another Schumacher: “I have a younger brother, Ralf, he’s even quicker than I am.”

Were you at this race? Do you remember it? Tell us about it in the comments.

Michael Schumacher on his 1991 F1 debut