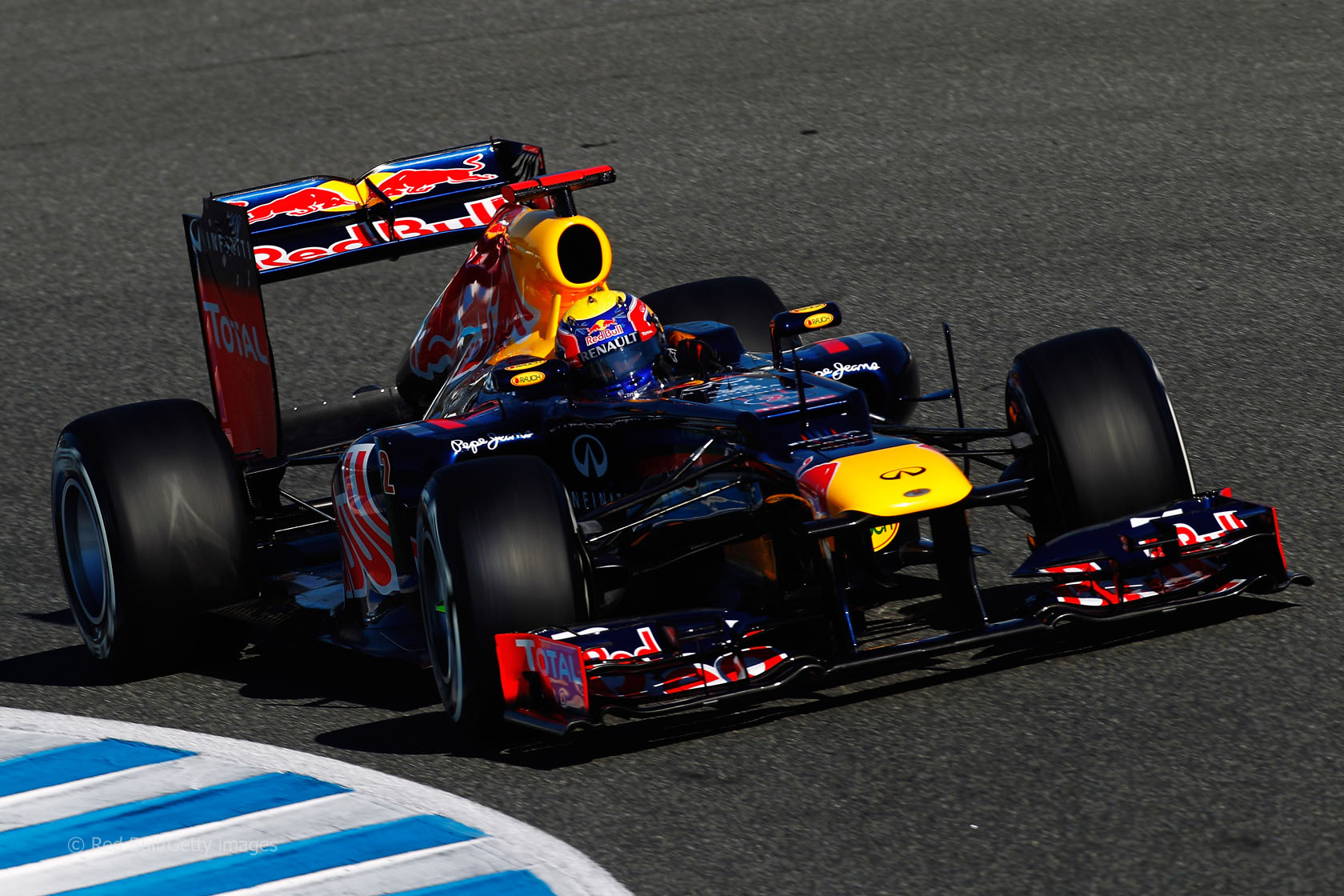 The F1 Fanatic 2012 season preview continues with the first of our team profiles – on reigning world champions Red Bull.

Of last year’s 19 races Red Bull scored 12 victories and set pole position 18 times. So their goal for 2012 will be continuity, not change.

And that’s exactly what they’ve got within the team: world champion Sebastian Vettel remains alongside Mark Webber, and ace designer Adrian Newey has revealed his latest creation.

But Red Bull can’t prevent change in the technical rules – which is arguably the greatest threat to their supremacy in 2012. It offers a glimmer of hope to the rivals they battered into submission in 2011.

In 2011 Vettel raised the bar so high you might think he left little room for improvement. “You would be surprised,” he said.

“We sat down during the season and especially after the season and before this season again, trying to identify where we think we can improve, and yeah we got a couple of points.”

He will surely have dwelled on a few near-wins that got away: the tyre strategy in China, the last-lap mistake in Canada, the gearbox problem in Brazil.

Then there was his off-colour performance in Germany – a reminder that even the best of them have off-days.

Last year Vettel regularly exploited the RB7’s margin of advantage, however slender it became at times. He took pole position and drove away from his competitors with monotonous regularity.

But the rules changes for 2012 mean he’s not taking it for granted that this year will be a repeat of 2011: “I think it will be very, very tight this year and everything else would be a surprise to be honest.

“Looking at the cars, you know there?Û‘Èº‘‰Ûs not much room we have left to play [with] for designers and to find something extra. You know, the last two years we have had two big things taken away, the double diffusers, plus, for this year, the system around the blown exhaust.

“So we are missing that and therefore I think it?Û‘Èº‘‰Ûs difficult to really create a difference. We?Û‘Èº‘‰Ûll see, obviously we hope our car is better than all the others but it will be difficult, and I think the cars will be fairly similar, as in the gaps will be even closer than they have been.”

The situation in the other half of the Red Bull garage is quite plain to read. While Vettel is on a long-term contract until 2014, Webber had another single-year extension on his deal last year.

Meanwhile the team has stepped up efforts to find a new recruit. Having deemed Jaime Alguersuari and Sebastien Buemi not worthy of a seat with the top team, junior outfit Toro Rosso are now testing a fresh pair of hopefuls wanting to follow in Vettel’s footsteps.

But despite the disappointment of losing the championship late in 2010, and the pummelling he took last year, Webber is not ready to throw in the towel just yet.

“I think off the back of last year many sportsmen or women when you don?Û‘Èº‘‰Ût get the most out of a situation you always want to come back and improve and do a better job.

“The bar has been lifted very, very high in the last few seasons and it?Û‘Èº‘‰Ûs the challenge I’m looking forward to. I’ve had a really good winter and prepared for the season as best I can so I?Û‘Èº‘‰Ûm looking forward to the new season, I just cannot wait to get racing. We can talk a lot about it but we need to get on the track.”

After struggling with the new tyres at the beginning of last year, Webber made progress throughout the season. He needs to carry that momentum on into 2012 and build on it if he’s to have any chance of beating his team mate.

Aerodynamics is king in Formula 1 today. And that goes a long way toward explaining Red Bull’s dominance in recent seasons.

They have been the benchmark team since the last major change in the aerodynamics rules in 2009. Since the second half of that year, once they got to grips with the double-diffuser concept, they have usually had the car to beat.

Though it would be foolish to pin all their success on a single element, their exploitation of the exhaust-blown diffuser concept was key to their performance last year and in the latter stages of 2010.

Curiously, this coincided with Vettel exerting a much greater degree of superiority over Webber – which could well be related.

The restrictions on exhaust-blown diffusers this year will force Red Bull to look for an advantage in other areas, as chief technical officer Adrian Newey explains: “We have lost the exhaust technology, with the restriction [on] exhaust outlet position, that we were able to develop and perhaps be ahead of the pack on in the last couple of years, that led to a big rethink over the winter.

“The exhaust allowed us to run a high rear ride height, it?Û‘Èº‘‰Ûs much more difficult without that to sustain a high rear height so we have to go back down and have to redevelop the car around that lower ride height.”

Red Bull enjoy significant strengths in other areas, not least their pit crew, which was one of the quickest and most consistent in 2011. That will serve them well if the predictions the RB8 won’t be as dominant as its successors are realised.

Red Bull’s victories and championship positions since they entered F1 in 2005:

Will Vettel retain his drivers’ championship – and will the team hold onto the constructors’ trophy – for a third year in a row? And how will Webber fare this year?

Have your say in the comments.