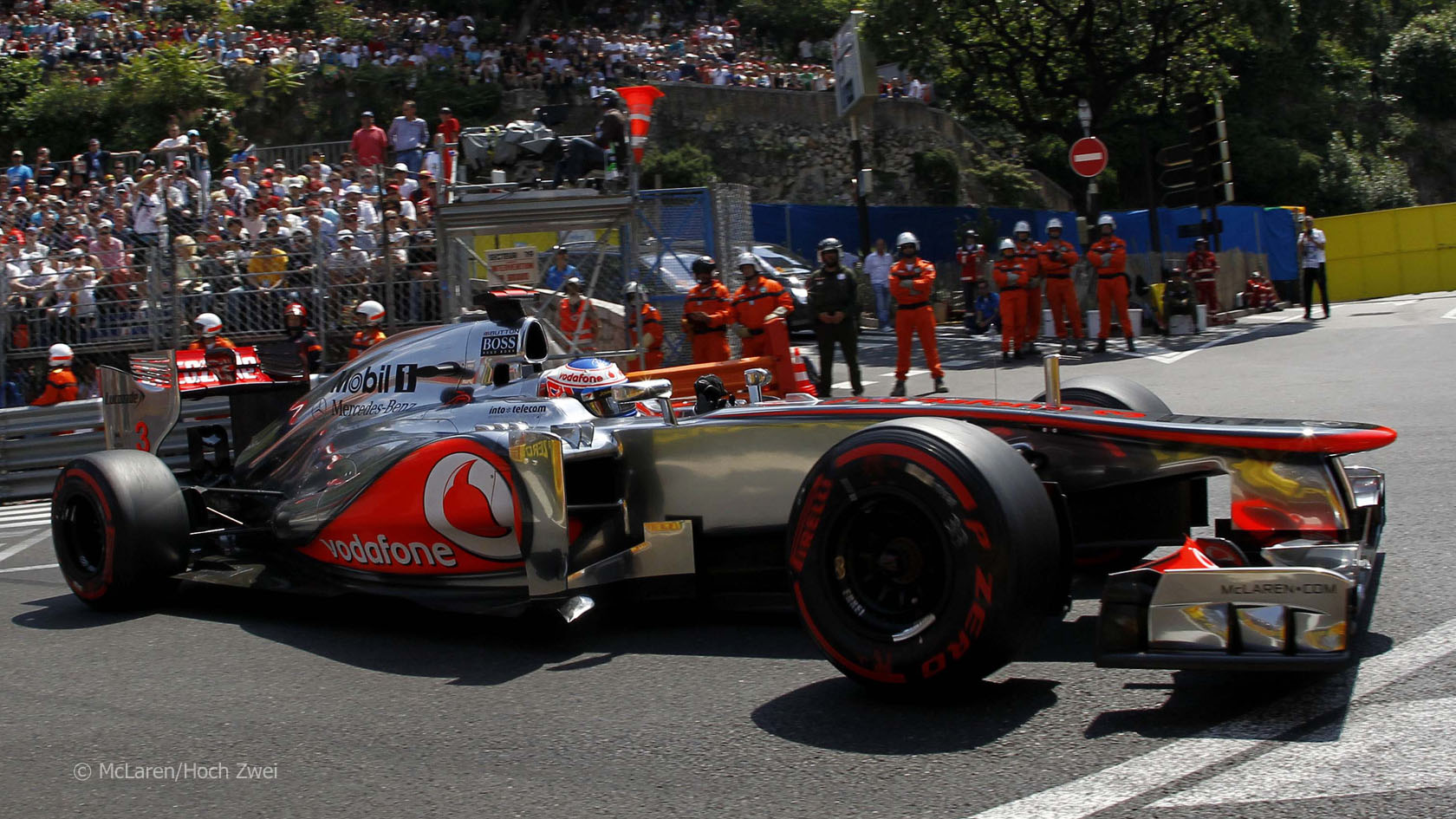 McLaren began 2012 with a lower and sleeker nose on their car than their rivals.

But following the Mugello test a revised version was introduced for the Spanish Grand Prix with a higher tip and a flatter profile. Why did they make the change?

One of the most striking changes of the 2012 regulations was the mandatory lowering of the nose. The nose section now must be no higher than 550mm above the reference plane, which is 75mm lower than before.

To maximise air flowing under the car most teams have resorted to the ugly ‘stepped’ nose. This design sees the top of the chassis and nose section hug the height boundaries imposed by the regulations. Because there is a discontinuity in this boundary it creates a ‘step’ atop the chassis. By doing this there is a greater volume of free space below the nose to manage the airflow which feeds into the floor.

The only team that didn?óÔéĽÔäót buy into this ‘high nose’ philosophy was McLaren. For the last couple of years McLaren have elected to build a lower chassis in order to reduce the centre of gravity of the front of the car – a very important characteristic to improve mechanical grip. Hence the MP4/27 was the only car not to feature the otherwise ubiquitous stepped nose. The first drawing shows the nose and front wing of the launch-spec MP4-27. At this juncture the car still featured the ?óÔéĽ?Łsnow plough?óÔéĽÔäó, which fits under the nose and creates additional downforce and manages airflow around the sidepods. The snow plough was run extensively in 2011 and can be seen very clearly from the photograph below.

The low nose and snow plough means that it is harder to develop the surrounding area ?óÔéĽÔÇŁ for example under wing vanes must either be smaller or omitted as the underside of the nose is much closer to the FIA?óÔéĽÔäós mandated exclusion zone where teams cannot place bodywork.

In addition it is more tricky to place the cameras in-board under the nose as that zone (especially with the snow plough) is even more cluttered.

Although McLaren claimed that it hadn?óÔéĽÔäót missed a trick with the high nose, the team began evaluating the concept in February. The new nose made its first appearance late on the final day of the Mugello test at the beginning of this month and was introduced at the Spanish Grand Prix.

The second illustration shows the latest high-nose and front-wing on the MP4-27. It is worth noting a few things.

The front wing pillars are noticeably wider and higher thus allowing a much larger volume of air to flow under the car. The wider pillars also allow the cameras to be positioned in-board directly under the centre of the car ?óÔéĽÔÇŁ from the drawing the in-board cameras create a quasi-flap behind the FIA mandated central wing section. This will increase aero efficiency and create a little downforce. Although McLaren turfed out the snow plough (right) in February testing (it is unclear whether there was ever an intention to run it on the car) it is incredible how much additional space it frees up.

If you look at a front shot of the MP4/27 it almost appears as those the nose is now stepped ?óÔéĽÔÇŁ this is because the new nose now hugs the upper 550mm boundary defined by the FIA. This new set-up allows front-wing vanes to be positioned underneath the chassis to scavenge air under the nose and to stop dirty air from the tyres impeding this flow.

The final point to note on the new McLaren front wing assembly the added aerodynamic detail on the front edge and underside of the wing. The green circle shows an example of this detail. Teams are becoming ever more sophisticated in producing and targeting vortices for aerodynamic benefit.

This detail (circled above) is likely designed to create a series of vortices directed to the lower-inside part of the tyre. Again this will help prevent turbulent air from the rubber interfering with the airflow downstream.

Is a stepped nose next?

McLaren will likely retain the ?óÔéĽ?Łhigh nose?óÔéĽÔäó concept for the remainder of the season. They have committed to it now for two races and the team clearly believe the new design has more development potential.

An interesting question is whether come 2013 the MP4-28 will feature a stepped nose. This is likely to depend on whether the FIA change the regulations.

The technical rules are set to lower noses a further 300mm in 2014. The compromise rules for this year were chosen to allow teams to continue to run their 2011 chassis if they chose.

The FIA therefore has some room to manoeuvre and may tweak the rules next year to remove the unsightly stepped noses from the sport. If that doesn’t happen I would expect McLaren to evolve their current design and join the rest of the grid in having a stepped nose of their own.

55 comments on “Why McLaren turned their nose up”