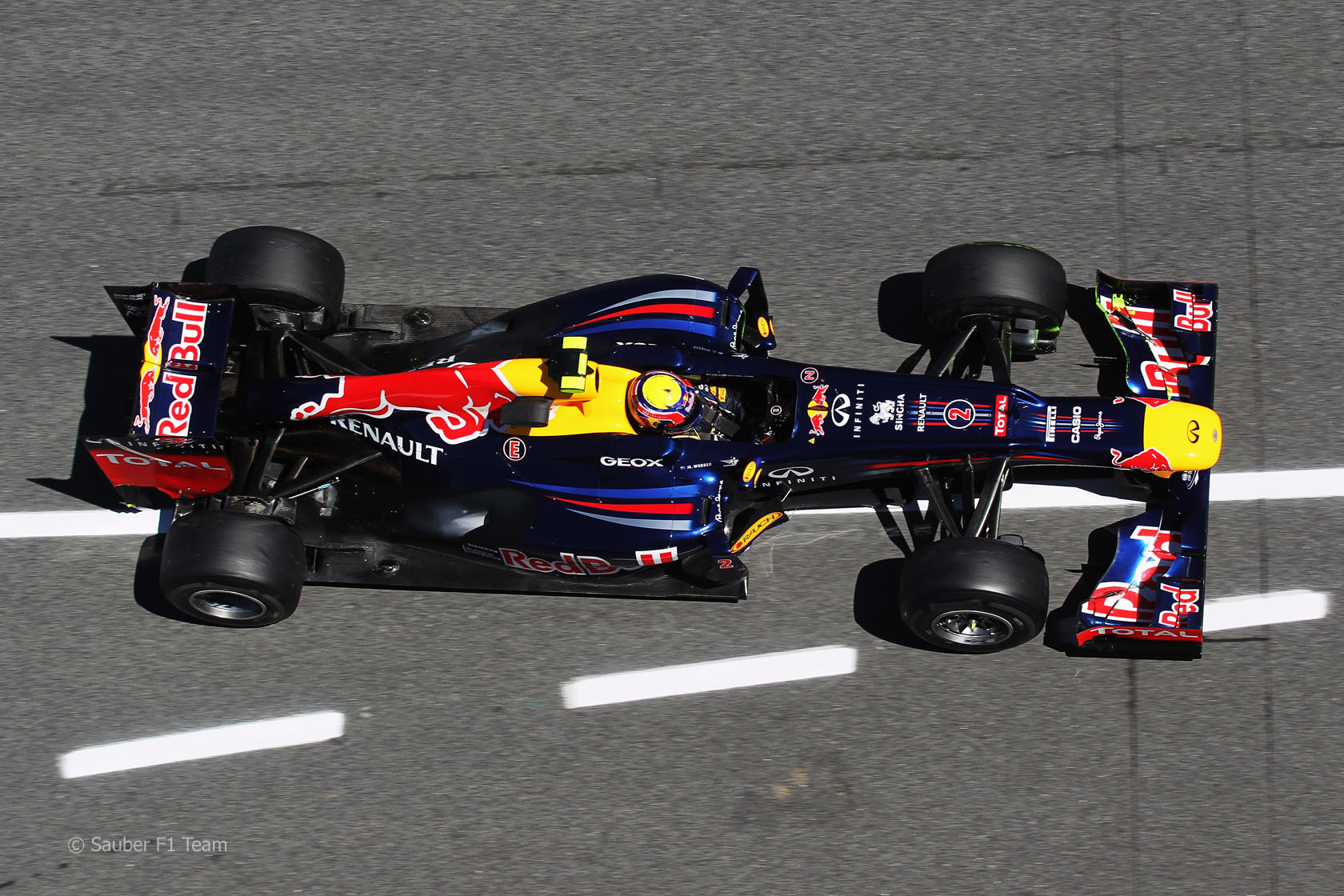 The FIA has decided the hole in Red Bull’s floor in front of its rear wheels does not comply with the rules.

Red Bull have run the RB8 in this configuration for the last three races, of which they have won two.

Following the Monaco Grand Prix both Red Bulls (and all the other cars which finished in the top ten) were checked by FIA technical delegate Jo Bauer and passed scrutineering. The post-race technical report shows this included an inspection of the “rear bodywork area”.

However yesterday the FIA issued a new Technical Directive which stated that the hole in Red Bull’s floor is not legal:

But if Red Bull’s car has not complied with the rules, should they be allowed to keep the points gained while their car has been running in this configuration?

At the Australian Grand Prix last year, the rear wings on both Saubers were found not to comply with the rules. They were thrown out of the results and the cars which finished behind them were promoted in the standings.

Three weeks ago at the Spanish Grand Prix, Lewis Hamilton’s car was found in violation of the technical rules during qualifying, and he too was excluded from the results and had to start the race from last place.

The scale of the advantage gained is likely in the region of hundredths of a second, not tenths. But this is the margin pole positions are being won or lost by at the moment, and we all know how important that is on a track like Monaco.

Red Bull’s cars were ruled legal by the scrutineers at the races they competed in, so there are no grounds to go back and remove them from the results.

Their rival teams had the opportunity to protest against them and chose not to – despite much speculation in Monaco that McLaren, Ferrari or another of their rivals might do.

Given that, there is no reason for the FIA to change the results of the races Red Bull has won with a design which has now been ruled illegal.

Red Bull can’t be blamed for pushing the FIA’s interpretation of the rules in a bid to gain every last fraction of a second of performance. That is what racing teams do.

The real question here is why have the FIA been allowing Red Bull to run their car in a specification which they now say is against the rules.

We have seen several examples of the difficulties of enforcing a written set of rules on car design in the past. But unlike past controversies such as flexible front wings, this does not involve discovering how much a wing is deforming when a car is in motion, but a rather more straightforward question of measuring a car part and deciding what constitutes a hole.

Given that, the only difference between Red Bull’s car being ruled illegal today and Sauber’s 14 months ago is the amount of time the FIA took to make its mind up.

Red Bull don’t deserve to be punished for the FIA’s ineffectual policing. But if they win the constructors’ title courtesy of the points gained at Monaco, McLaren or Ferrari may regret having passed up their chance to protest them.

Should Red Bull lose the points and wins gained with their ‘illegal’ floor?

Should Red Bull lose points over their 'illegal' floor?

An F1 Fanatic account is required in order to vote. If you do not have one, register an account here or read more about registering here.

169 comments on “Should Red Bull lose points over ‘illegal’ floor?”