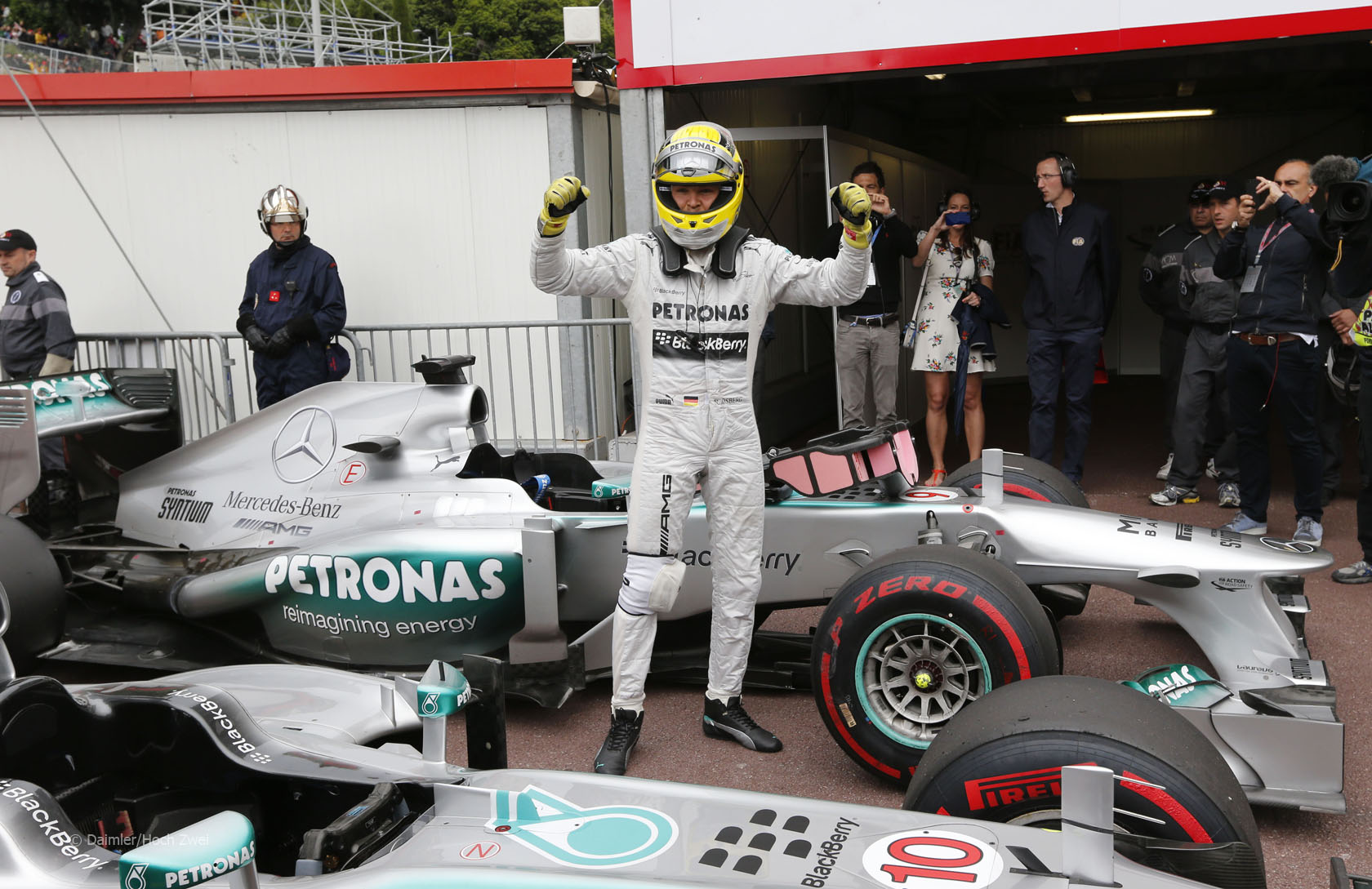 Mercedes have claimed the front row of the grid for the second race in a row and this is surely their best chance yet of winning a race.

The W04’s deficiency in tyre degradation is well known by now. But the sheer difficulty of overtaking at Monaco will make it difficult for their rivals to jump ahead of one of their cars, never mind both of them.

In the past 20 years the Monaco Grand Prix has only been won by a driver who didn’t start on the front row on five occasions. Four times the winner came from third – which is good news for Sebastian Vettel – and Olivier Panis won from 14th in the topsy-turvy 1996 race.

That shows why Mercedes, despite their tyre struggles, have such a strong chance in the race. Pole sitter Nico Rosberg has a chance to emulate his father’s Monaco Grand Prix win 30 years ago with a victory of his own.

Conventionally, if you’ve got pole position for the Monaco Grand Prix you should win the race. In the past nine F1 races at Monaco the pole sitter has won eight times. The only one who failed to was Felipe Massa in the wet race held five years ago today, partly because he went off at Sainte Devote during the proceedings.

It’s unusual to see the pole sitter lose the lead on the run to the first corner at Monaco. But it’s not uncommon for the driver who’s third on the grid – on the cleaner, inside line – to get a good run at the driver who’s starting second. Sebastian Vettel will be eyeing that opportunity to split the two Mercedes.

Fernando Alonso has made some excellent starts this year and needs another one from sixth. At minimum he needs to clear Kimi Raikkonen, a major championship rival whose race pace makes him a serious threat. Another slow start for Mark Webber ahead would play into Alonso’s hands.

But keep an eye on seventh-placed Sergio Perez as well. His starts have been better than Alonso’s on average this year. If Alonso fell behind the McLaren at the start it would be a disaster for his chances in the race.

Romain Grosjean will surely have in mind his crash at the start of last year’s race when he lines up 13th. He’s hit the barrier three times already this weekend and simply has to stay out of trouble at the start. While rapidly degrading tyres and DRS have made overtaking tediously easy at most tracks, Monaco has remained stubbornly resistant. That’s largely due to the near total lack of overtaking opportunities and its low-grip surface.

A one-stop strategy won last year and Vettel was on course to win with a single stop in 2011 when a red flag interruption gave him the opportunity to change his tyres without penalty.

According to Pirelli, a two-stop strategy will be quicker during the race. But there is a huge incentive for anyone that can do so to pit just once: the risk of losing track position in a pit stop is just too high.

Last year’s race was shaped in part by a threat of rain. Teams were unwilling to commit their drivers to a pit stop as they were concerned they might need to pit for wet weather tyres soon after. A shower eventually arrived but it wasn’t strong enough for intermediate tyres to be necessary. Tomorrow is currently forecast to be dry and sunny.

So the strategy tomorrow will be shaped by when drivers feel they can make a pit stop and come out with a substantial amount of clear air in front of them. Last year the front runners waited until Raikkonen’s tyres had gone off badly.

Because of the low-grip nature of the circuit, drivers do not gain as much from pitting before a rival. Indeed, Alonso was able to jump ahead of Hamilton by pitting later than him – and might have gained more places had Ferrari gambled on leaving him out longer. That option may work for them again tomorrow, and Lotus too, as the top ten all start on the fragile super soft tyres.

Nico Hulkenberg is first among those who have the choice of starting on the harder soft tyres if they wish, which could open up new possibilities for them.

All this is conducted under the ever-present threat of the safety car being summoned, which can turn a race on its head in Monaco.

Three years ago the appearance of the safety car immediately after the start was a gift for Alonso, who’d started the race from last place following a crash in practice. His team mate is in much the same situation this year and an early safety car would be a big help for him.

Alonso was able to make this work to such good effect because he started on Bridgestone’s super-soft tyres, was able to switch to the mediums at the end of lap one and complete the race on those tyres.

It’s doubtful Massa would be able to do the same using Pirelli’s allocation of soft and super-soft tyres. But as he’s starting from the back anyway it might be worth trying as he’s got little to lose.

Starting first and second gives Mercedes the option of using their second-placed driver to hold up the chasing pack, guaranteeing victory for the other. But Ross Brawn has denied they will do that.

Will Mercedes finally score their first win of the year this weekend? Which of their rival will be the biggest threat to them?

Share your views on the Monaco Grand Prix in the comments.