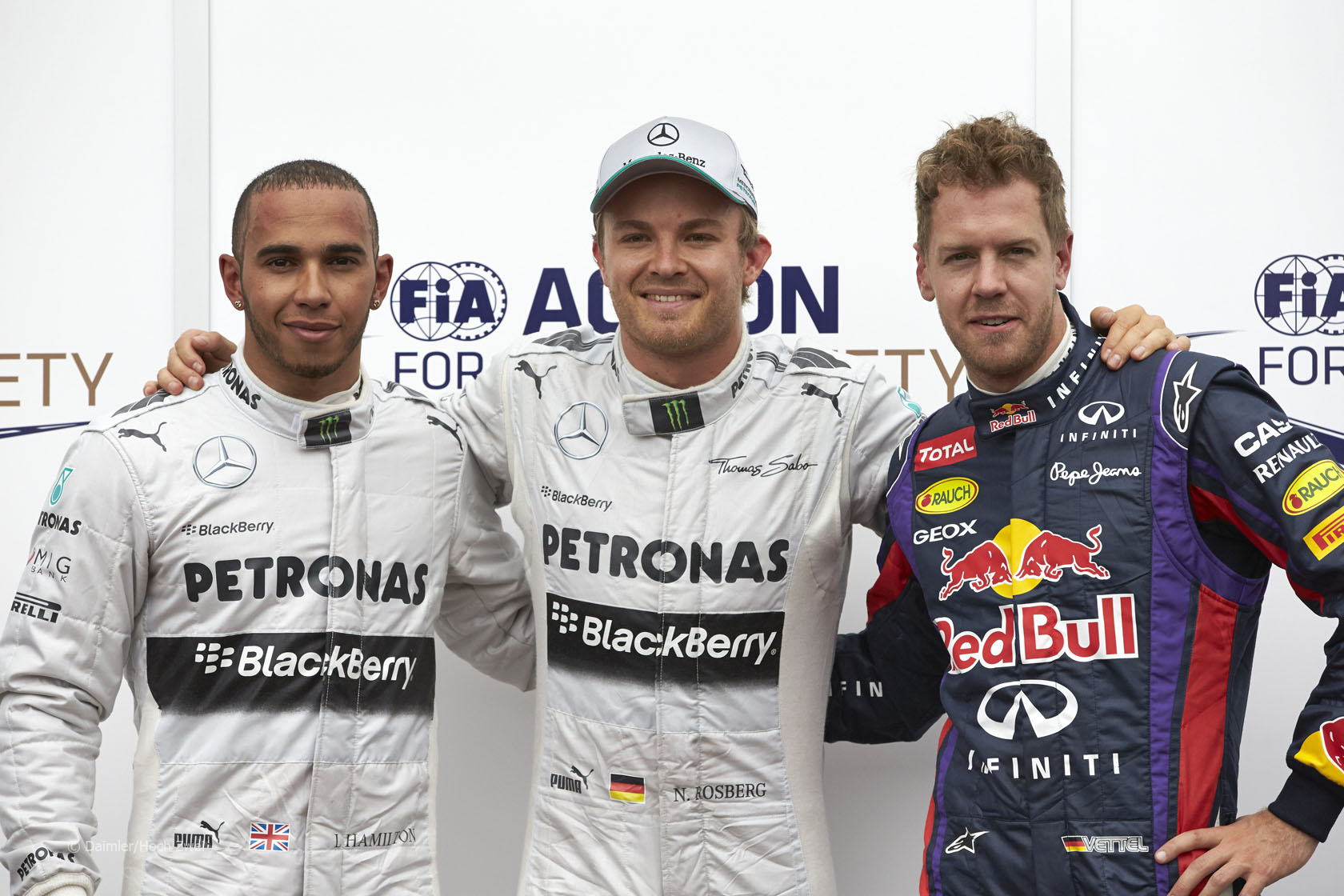 Mercedes’ domination of qualifying extended to four races in a row in Monaco.

Nico Rosberg took his third consecutive pole position and Lewis Hamilton will join him on the front row after a rain-hit session.

The Red Bull drivers took the second row of the grid ahead of Kimi Raikkonen and Fernando Alonso.

After three days of sunshine and ideal conditions the clouds swept in before the start of qualifying to give the most difficult track on the calendar a treacherous layer of moisture.

It was intermediate tyres all round as all the drivers took the track with the exception of the three drivers whose cars required repairs after final practice: Adrian Sutil, Romain Grosjean and Felipe Massa.

But one of the drivers barely made it out of the pits before hitting trouble. Jules Bianchi pulled over at the entrance to Massenet with an airbox fire.

In the slippery conditions several drivers visited the escape roads, particularly the one at Mirabeau. But impressively all of them kept their cars out of the barriers.

Grosjean made it out onto the track in the final minutes of the session. He redeemed himself after a scrappy practice by setting the fastest lap with his first effort and comfortably reaching Q2.

But Paul di Resta was left fuming at his team after he went out in Q1, struggling for grip at the end of the session. Ironically he was eliminated by team mate Adrian Sutil.

Giedo van der Garde surprised by getting his Caterham into Q2 thanks in part to Ferrari’s inability to complete repairs on Massa’s car in time.

The track continued to dry in the second part of qualifying which presented drivers with some difficult decisions about whether to switch to slicks.

In the end they all did, but Alonso had to make a last-minute call to abandon a better effort on intermediate tyres and put on a set of the super-softs. Van der Garde was the first to do so and he managed to out-qualify Pastor Maldonado.

Alonso fell into the drop zone towards the end of Q2 but claimed his place in the final ten with his last lap, completed with seconds to spare. Behind him Sutil cut it even finer, but his last effort was enough to secure his place in Q3 at the expense of Nico Hulkenberg.

Jean-Eric Vergne began the session struggling on his intermediate tyres but a late change secured his passage to Q3 for the first time this year while Daniel Ricciardo failed to progress.

But an unhappy Grosjean blamed one of the Toro Rossos for holding him up and keeping him from Q3. “No way, this is unbelievable,” he exclaimed when told he hadn’t made it through to the final round of qualifying.

By the final part of qualifying the track was dry enough for everyone to take to the track on the super-soft tyres. The lap times tumbled as the track improved with every passing car, but once the drivers had completed their first round of laps it was Vettel on top, as he had been at the end of Q2.

Alonso was one of the first drivers to change tyres for his final run, giving him two chances to set a time. But his last effort was only good enough for sixth place, Raikkonen pipping him by a mere two-thousandths of a second.

Ferrari and Lotus weren’t involved in the battle for pole position – that was all about Red Bull and Mercedes. Webber struck first, beating Vettel’s time. But the Mercedes were up next.

Hamilton beat Webber’s effort by two-tenths of a second and behind him his team mate was going even quicker. There was less than a tenth of a second in it but it was enough for Rosberg to claim the top time.

That left Vettel, who had emerged from the pits for his final run with only two minutes remaining. He was close to both the Mercedes’ times through the first two sectors but fell short of them at the line, ending up 13 thousandths of a second off Hamilton.

“Sorry guys,” said a dejected Vettel on the radio after he crossed the line. “I think it was there. A tenth was there, definitely.”