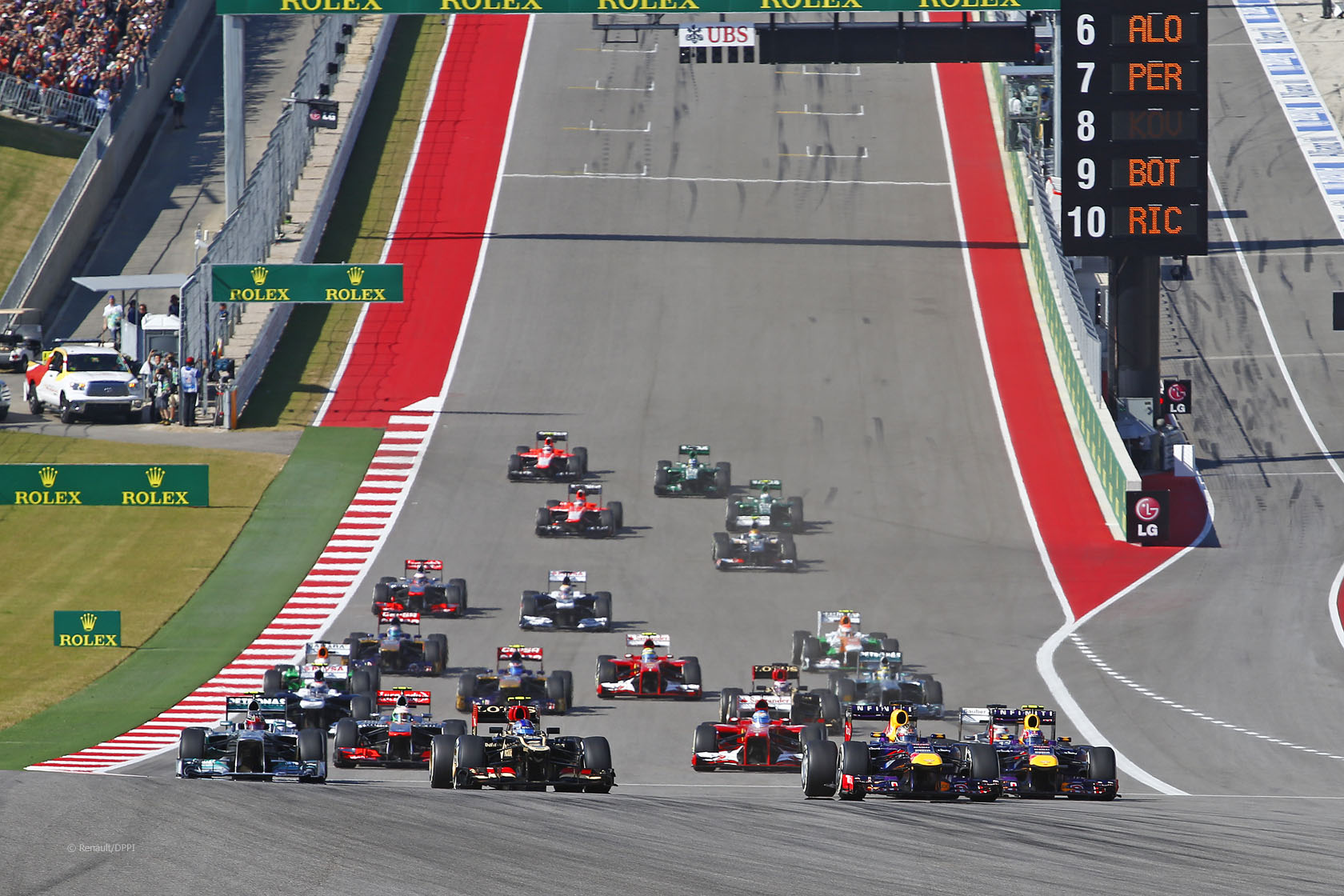 Last year’s United States Grand Prix was one of the highest-rated races of the season. But F1’s second visit to the Circuit of the Americas failed to recapture that high.

This year’s race was given an average rating of 5.396, the second lowest of the season so far.

The big news in the run up to the event was the absence of Kimi Raikkonen. Although this created a point of interest in how Heikki Kovalainen would fare on his return to racing, Lotus’s substitute driver had an indifferent race.

While Sebastian Vettel romped to another victory Romain Grosjean managed to split the two Red Bulls.

Behind the usual suspects Valtteri Bottas claimed his first points and Nico Hulkenberg put in another strong showing, despite which he is still without a confirmed 2014 drive.

But it seemed there was little to get many people excited about the grand prix:

Really boring. There were a few good moves and battles (like Bottas at turn two and Alonso picking up a few places), but overall the race lacked any kind of excitement.

When the top five are all separated by five second gaps after ten or something laps, you know there is something wrong.
@Kaiie

Not terribly exiting, but there was some good battles late in the race and a few surprising results.
@Mads

Even those at the track found it an underwhelming experience:

Watched the race at turn one for the start of the race and a few laps after Safety Car, fans were out of their seats but after lap 10 everyone was just sitting chatting and ignoring race.

Only Hulkenberg and Alonso really got people going again late in the race. Some didn?óÔéĽÔäót even wait until the end of the race to leave, avoiding the traffic was more interesting than the foregone conclusion.
@Hyakuyagami

Back in my hotel room in Austin before flying home to the UK tomorrow.

Pretty boring race. The Ferrari race was the best of the day, and that ran for half of the laps behind the Safety Car!
@Ragwort

Despite the tame race most people still seem to view the Circuit of the Americas as a worthwhile addition to the calendar:

Not a thriller, but it was a proper race around a great track ?óÔéĽÔÇŁ not the fake parade of gimmicks we had last time at Abu Dhabi. Like Silverstone, it?óÔéĽÔäós a track that compels overtaking drivers to defend through two or three corners before the move is complete, so the class and bravery on display from Alonso, Hulkenberg and Bottas stood out ?óÔéĽÔÇŁ even if there weren?óÔéĽÔäót many of them.

DRS was good for once ?óÔéĽÔÇŁ it maybe set up an extra move or two into turn one, but the other guy could still defend.
@Tomsk

I had to miss this race last year but I heard that the slick surface and hard tyres made for a great race on what seems to be a great track so I was looking forward to this race with great anticipation. I was bitterly disappointed in the race, now that the track is a year old the surface has lost its shine and so has the race, Lewis was being told to save his tyres so early in the race it almost seemed like it was behind the safety, car and that was how the race went till the end.
@Hohum

And there were some who found it an enjoyable affair:

I actually got a kick out of this one. Bottas overtaking Gutierrez on the switchback and Button doing the same later, frequent wheel-to-wheel racing at the end of the straight, a strong battle between Grosjean and Webber, and Hulk and Alonso.

Sure, the fight for first was dull, but that shouldn?óÔéĽÔäót surprise anyone. The Red Bull is over-developed and Vettel is driving like a mad man. Given all the action on track, I can live with that.
@Bforth

A world record and some great drives from Bottas, Grosjean and Hulkenberg ?óÔéĽÔÇŁ particularly the former. Great last couple of laps between Alonso and Hulkenberg as well.

The DRS wasn?óÔéĽÔäót too bad and the tyres generally were quite good at holding up too.
@Vettel1

But for others the uneventful end to the season has left some wondering whether there are more serious problems with Formula One:

I really think that the past six or so races have dealt a hammer blow to the popularity of F1 racing.

Don?óÔéĽÔäót get me wrong; it?óÔéĽÔäós nor Vettel’s fault, it?óÔéĽÔäós not Pirelli?óÔéĽÔäós fault, but something awful has happened to F1 racing even at one of the most exciting tracks in the world.

Based on the costs accumulated by all the teams divided by the number of races this year, we just witnessed the expenditure of many tens of millions of dollars at a single event and it was bloody boring.

No wonder the global TV audience is falling.
@Timothykatz

The general apathy and negativity expressed in these comments shouldn?óÔéĽÔäót just be swept under the carpet.

The people who are passionate enough about F1 to have an account on a website called F1 Fanatic are the sport?óÔéĽÔäós most loyal fan base. So if this is what we think about the sport then goodness knows how F1 hopes to attract new people.
@F1bobby

24 comments on “Second race at COTA gets much lower rating”