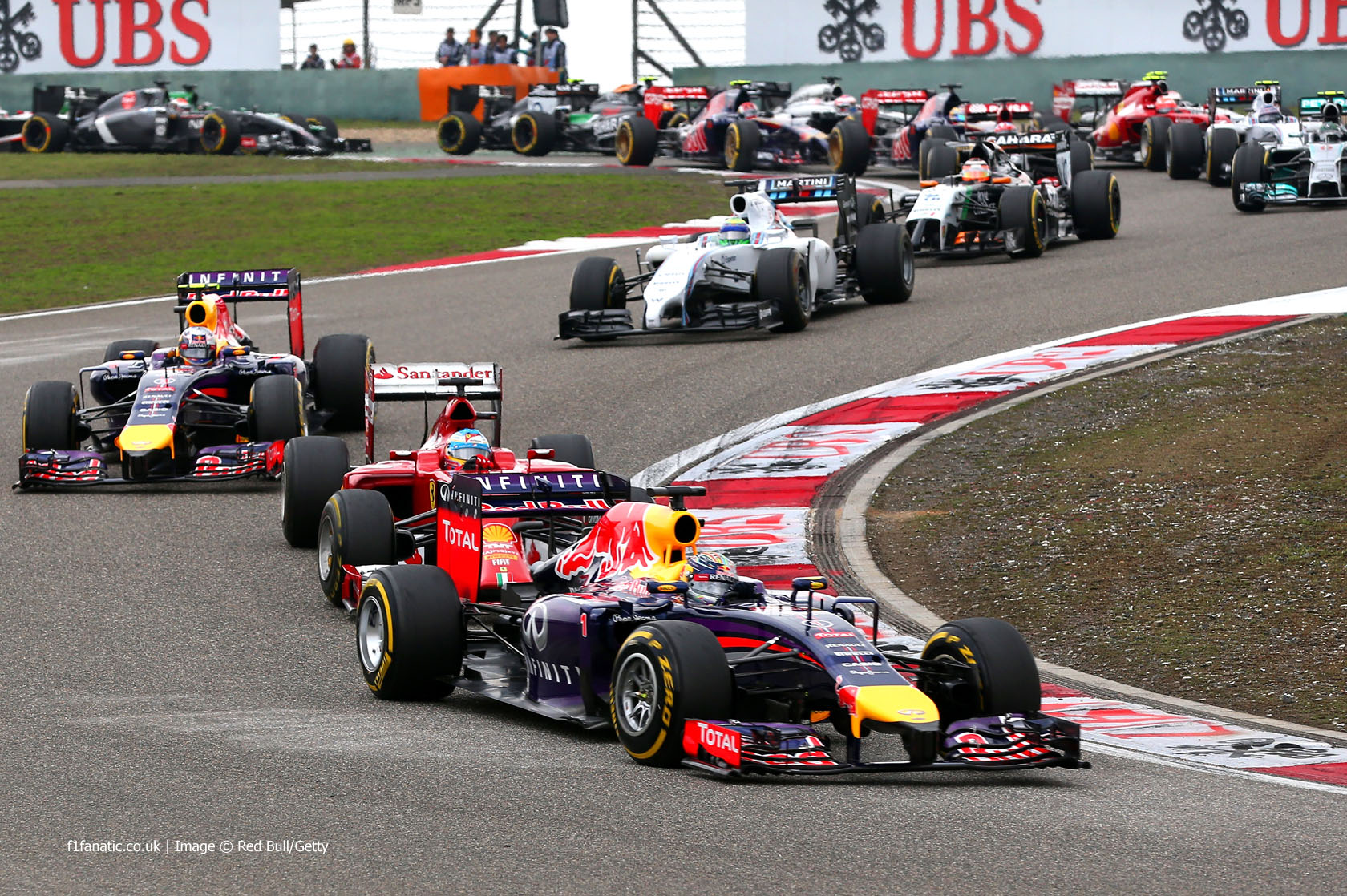 Which F1 driver was the best performer during the Chinese Grand Prix weekend?

Review how each driver got on below and vote for who impressed you the most during the last race weekend.

Sebastian Vettel – Not the first time he’s looked out of sorts in Shanghai, but this seemed to be more about the car than the track. Out-qualified by Ricciardo, he got ahead of his team mate at the start but plainly lacked the pace to stay there. Wasn’t receptive to being told to let Ricciardo past until his team convinced him they were on divergent strategies. It turned out they weren’t.

Daniel Ricciardo – Came on strong late in qualifying to claim his second front row start. Didn’t get off the line well, however, which ultimately meant he missed out on a chance for a podium finish. Looked capable of putting a pass on Vettel whether or not his team mate got out of the way, and having done so did his best to chase down Alonso. Nico Rosberg – Even if he hadn’t spun his car while taking an ambitious line through the final corner in Q3 after misreading his dash display, it’s unlikely he would have been on the front row of the grid. Was unlucky at the start, however – a telemetry failure spoiled a vital early chance to get past the Red Bulls. Once that damage was done, he spent the rest of the race capably making up for lost ground.

Lewis Hamilton – Seized the initiative when it was presented to him despite having been unhappy with his car’s balance on Friday. Drove with flair for his third pole position in wet conditions this year, then took command of the race and was pleasantly surprised to find he could run a long opening stint on the soft tyres which made life easier later on. Fernando Alonso – Fifth on the grid looked like the maximum the Ferrari was capable of. Vettel getting ahead of Ricciardo presented him with an opportunity which he and the team took full advantage of with a well-timed pit stop and Alonso’s usual relentless consistency. A very well deserved third place, though he was fortunate nothing came of his collision with Massa.

Kimi Raikkonen – Missing out on running on Friday morning was an unfortunate setback which he was still dealing with the consequences of on race day. Still looks distinctly uncomfortable in the F14 T – he lost almost a second per lap to Alonso in the race – but brought it home in the points.

Romain Grosjean – Took Lotus into Q3 for the first time and believed the car could have started higher than tenth. He ran in the points until a gearbox glitch put him out.

Pastor Maldonado – A power unit problem left him unable to participate in qualifying, so his arguably lenient five-place penalty for flipping Gutierrez over proved entirely irrelevant. He went by his Sauber rival cleanly during the race on his way to a trouble-free 14th.

Jenson Button – The team which began the season with a double podium finish seldom looked like points contenders at round four. A chronic lack of downforce meant they grained their tyres in the dry and couldn’t warm them up in the wet. Button ended the race 11th, several seconds behind Kvyat.

Kevin Magnussen – To McLaren’s woes Magnussen added a damaged front wing early in the race (again) on his way to a despondent 13th. Nico Hulkenberg – Underlined Force India’s status as best Mercedes customer by resisting race-long attention from Bottas for sixth place. His early-season consistency has him fourth in the championship at this early stage.

Sergio Perez – Qualifying was poor – he simply couldn’t get his tyres up to temperature and was much slower than Hulkenberg. But his race performance was far more credible. Perez gained more places than anyone bar Maldonado (who started last) to take points for ninth.

Adrian Sutil – Just when it looked like he was heading for another Q1 ejection Sutil pulled out a late flier which helped him to 14th. But an engine problem at the start of the race saw him limp around for five laps before retiring.

Esteban Gutierrez – Sauber’s upgrades did not transform the C33. Gutierrez started 17th and finished one place higher having been one of few drivers to make three pit stops. Jean-Eric Vergne – Vergne’s starts remain a problem – he lost three places on lap one in China which is considerably better than his average of 5.25. This was unfortunate as he’d qualified ninth and, as his team mate showed, the car was quick enough to finish in the points.

Daniil Kvyat – Got ahead of Vergne at the start which was to the benefit of his strategy and helped him to a tenth place finish – and a third points score in his first four races.

Felipe Massa – Made a stunning start – just as he did in Bahrain – but found himself hemmed in between three cars and banged wheels with Alonso. Then his team got his rear tyres mixed up at his first pit stop, ending his hope of scoring points.

Valtteri Bottas – Little to choose between him and Massa in qualifying. He could have ended lap one in sixth but tangled with Rosberg at the first corner and dropped back to tenth. Pursued Hulkenberg through the race but gained on the Force India too late to make a difference.

Jules Bianchi – Had Chilton handled in qualifying to the tune of a second and a half but more importantly he didn’t spoil his race with any unnecessary collisions. Lost out to Kobayashi on the last lap but as things turned out it didn’t matter. Max Chilton – Kept the other Caterham – belonging to his old GP2 sparring partner – behind until the end of the race. But was half a minute behind Bianchi.

Kamui Kobayashi – Certainly deserves sympathy for having his last-lap pass on Bianchi declared void for reasons entirely to do with someone else’s incompetence. Also had an amusing cameo when, on new tyres, he unlapped himself from Vettel. “I hear he wasn’t too pleased about that,” he said.

Marcus Ericsson – Said his race was “dominated by understeer” and was the last driver running at the end.

Which driver do you think did the best job this weekend?

Cast your vote below and explain your choice in the comments.

Who was the best driver of the 2014 Chinese Grand Prix weekend?

An F1 Fanatic account is required in order to vote. If you do not have one, register an account here or read more about registering here
When this poll is closed the result will be displayed instead of the voting form.