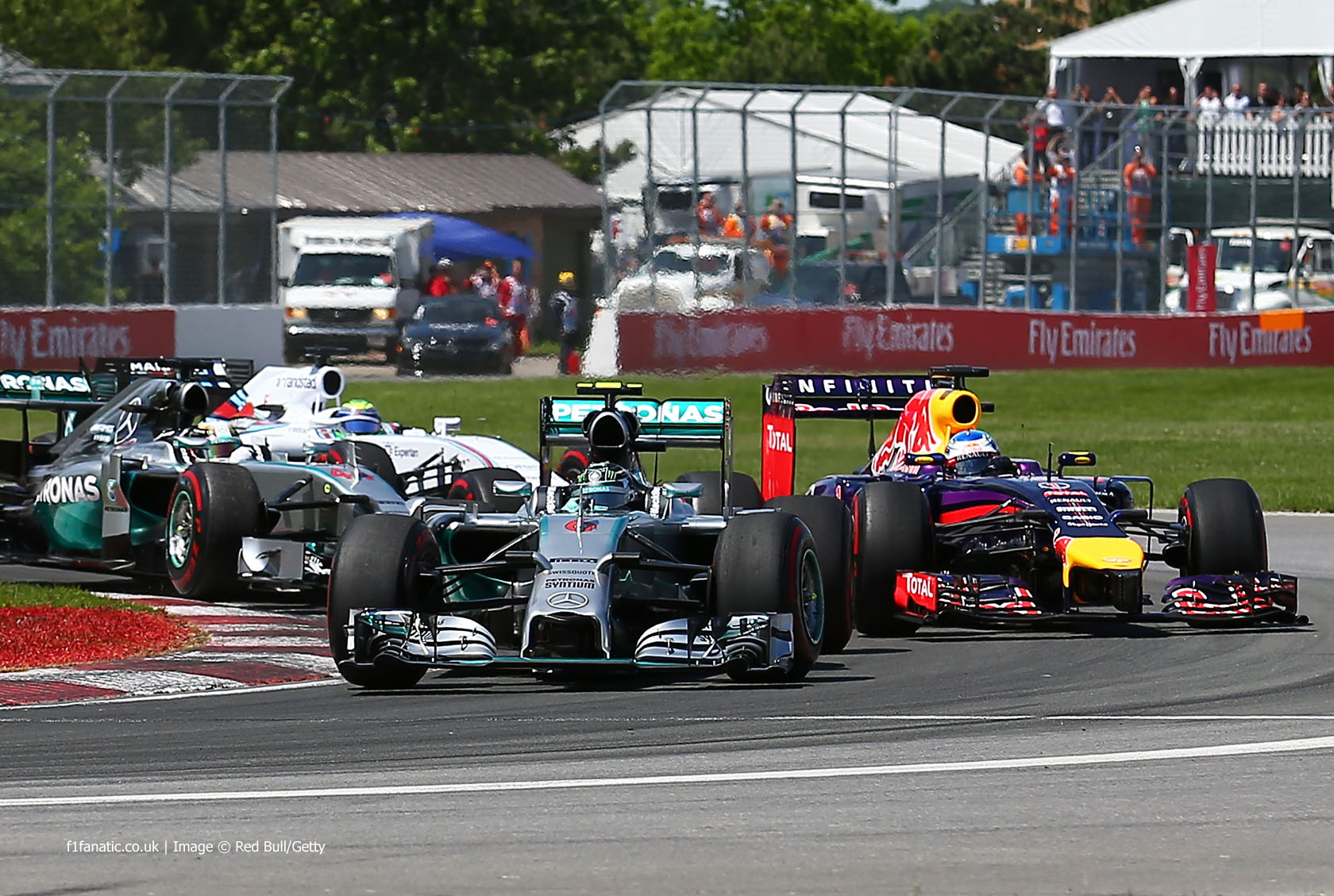 The Canadian Grand Prix went down a storm with F1 Fanatic readers, who gave it the third-highest score since Rate the Race began in 2008.

Daniel Ricciardo’s maiden F1 triumph, the halting of Mercedes’ domination, an uncertain outcome and a dramatic last-lap crash made for a thrilling race.

At a time when Formula One is increasingly concerned with raising its popularity and stemming a decline in viewing figures, the last round was the second race this year to get a higher score than any round of the 2008, 2009, 2010 and 2013 championships.

Canada’s Circuit Gilles Villeneuve has often been credited with producing some of F1’s best races. All bar one of its last six races received an average rating of 7.8 out of ten or higher. This year’s was the highest so far, scoring 9.190.

Here’s what F1 Fanatic readers had to say about the Canadian Grand Prix.

‘Race of the year’

Best race of the year. Canada never fails to provide an exciting race. This is the kind of race I want to see all of the time.

It was the first time this year that everyone in my household was yelling at the television like it was a hockey game!
@Irejag

A real cracker of a race. At first the Rosberg-Hamilton rivalry, then the midfield battles, then the Mercedes problems, then Williams with big gains, then Ricciardo, then Force India resurgent, then all the attrition, and finally the last ten laps with an awesome battle for the top five.
@NJ-Joe

As a Hamilton fan, one out of ten, but as an F1 fan, ten out of ten. Voted ten for sure.
Eddie (@Wackyracer)

Fantastically unpredictable race, plenty of different strategies, unreliability, incidents and drama. I ‘only’ rated it a nine, because the actual wheel-to-wheel stuff wasn’t inspiring, either simple DRS passes or follow the leader with not a whole lot between those extremes – so it was really misfortune that provided the excitement over the racing. Still a great race (though personally I preferred Bahrain).
Keith Campbell (@Keithedin)

Although the ending was fantastic, the first half of the race was the usual 2014 dullness, and the I hate how the FIA insists on two DRS zones with one detection point on this track.

Then the Mercedes’ developed issues and the race became very exciting. And the excitement only grew from there.
Michael Brown

I didn’t think the racing was quite at the same level as Bahrain (I wasn’t hyperventilating this time). I’m very happy for Ricciardo but had Mercedes not had problems no one else would be close to taking it to them. The racing between Hamilton and Rosberg was momentarily interesting but they were both having difficulties by then and it wasn’t so much racing as capitalising on mistakes and mechanical issues. Still, a very good race.
@MortyVicar

The TV footage could definitely have been better, there were a few times the director choose to show shots of the crowd or mechanics sitting in the garages when there was action to be seen on the circuit.

Most notably after the second round of stops when Hamilton ran wide at the hairpin with Rosberg retaking the lead the TV then cut to the crowd’s reaction instead of focusing on the cars where Hamilton was trying to get the lead back before ultimately his brakes failed.

We also didn’t get to see how Button managed to get fourth at the end.
@PJA

Constant excitement, unbelievable developments, nobody could have written a script for that. The only minus point is the excruciatingly awful FOM coverage, showing exactly what we don’t want to see.
@Andae23

Abysmal TV directing again. “Something is happening on the track, let’s show the reaction from the crowd/mechanics. Oh, and it’s over, back to normal shots of cars going round.”
@KaIIe

Those who were there – or wished they were

Race of the decade for me so far.

As a Canadian, I’m very proud of our lovely little track on Ile Notre-Dame. At the same time, I’m an idiot for only living an hour from Montreal and not going to the race.
@Frost_Byte_94

That was the best race. I still can’t believe I got to witness that with my own eyes live at the hairpin.
Fernando Dasilva (@Nando2323)