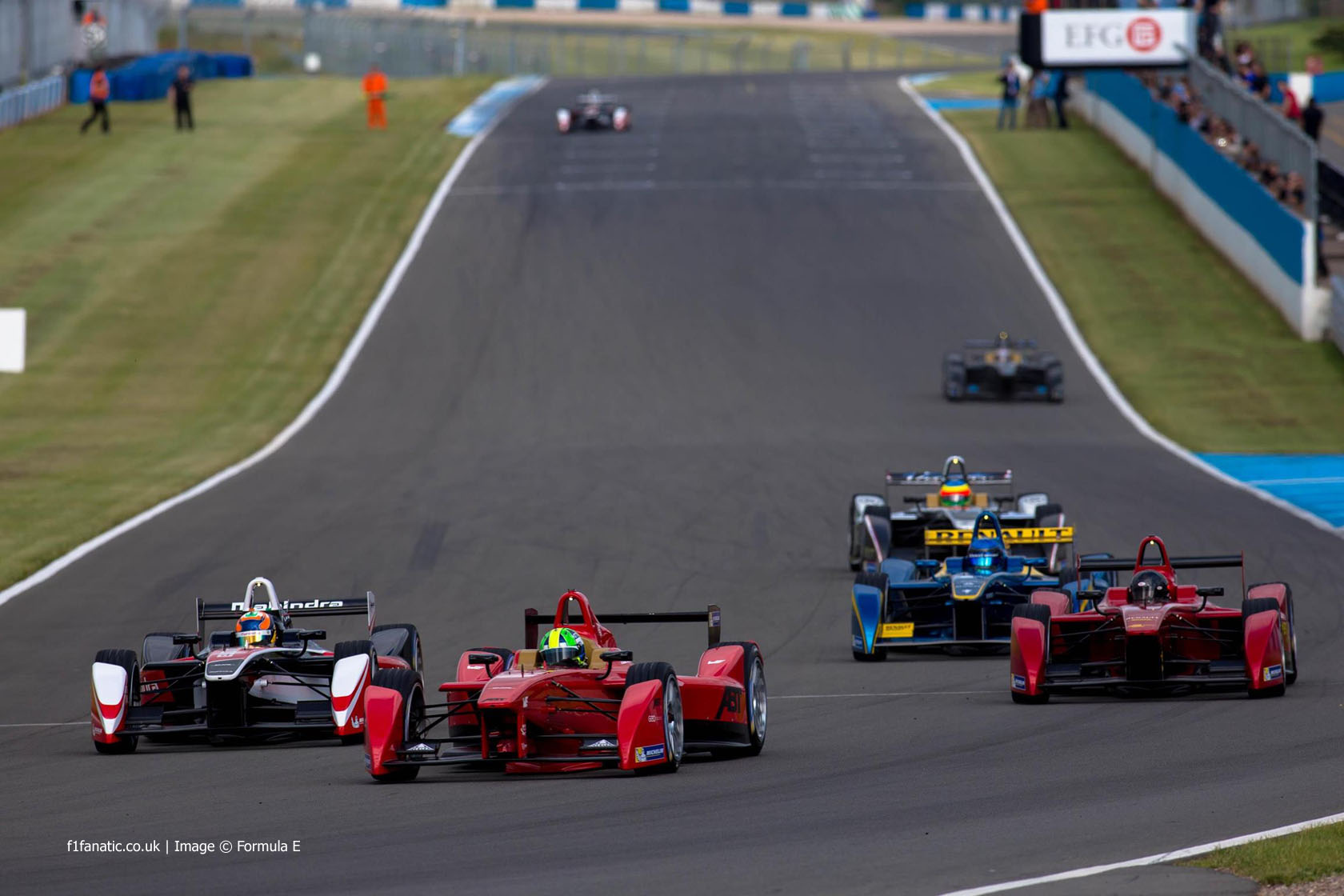 It’s not hard to find reasons to be cynical about a new racing series – especially one which is developed around the concept of environmentally-friendly motoring.

But Formula E, the FIA’s new single seater championship which holds its first event this weekend in China, is ground-breaking in more ways than one.

The FIA hopes that in a few years’ time we could be talking about this championship as the electric-powered equivalent of Formula One. The ten teams all have the same hardware for this season, but from next year the rules will be relaxed to open up avenues for development.

FIA president Jean Todt believes technology transfer to F1 will eventually be possible and some teams already have a hand in the technology. Williams supply the all-important batteries which provide 200 kilowatts of juice, and the electronics which controls it all comes from McLaren.

The Michelin rubber also marks a departure from other racing series as instead of racing slicks the cars will use grooved tyres which are designed to work in wet or dry weather conditions.

And it’s not just the cars which are novel. The event format is a departure from convention, with all the competitive action taking place on one day, including qualifying and the race.

That is partly because the calendar will exclusively visit circuits on city streets. The planned ten-round schedule will maximise its exposure to the watching world with events in California, Miami, Buenos Aires and the scene of this weekend’s race – Beijing. They will also stop off in Monaco for a dose of F1-style glamour two weeks before next year’s grand prix.

Drivers will have to make one mandatory pit stop during the race and will change more than just their tyres – they’ll switch cars. For safety reasons a minimum time will be imposed for the change-over.

Inevitably with so many new elements at work there will be glitches to iron out – not least of which recharging the power-thirsty chassis, which caused several problems during testing. But Todt expects the learning process will quickly give way to growth and interest from more car manufacturers. “Formula E is just beginning, and it is necessary to carefully examine the first season to see what works and what does not work,” he said.

“As it gains popularity and as the calendar increases, new teams and new manufacturers will be crucial. We believe we have created a framework to support the positive evolution of the series over many years, notably in opening gradually the competition between engine and battery suppliers.”

If, as Todt says, Formula E is to be seen as “a stand-alone series” rather than a rung on the ladder beneath F1, then it needs to have a credible driver line-up. And for the most part it does – every team has at least one driver with F1 experience.

They include Jarno Trulli, who has set up his own team, Nick Heidfeld, Jaime Alguersuari, Bruno Senna, Charles Pic, Lucas di Grassi and Sebastien Buemi. Takuma Sato will also drive this weekend, though he his substituting for regular driver Antonio Felix da Costa, who has a clashing DTM commitment.

Da Costa is one of several promising junior drivers in the field, along with Sam Bird and Daniel Abt. And Formula E can claim to have more women on the grid than any top-line single-seater series, with Katherine Legge at Amlin Aguri and Michaela Cerruti as Trulli’s team mate.

Formula E is an innovative new addition to the motor racing scene and tomorrow’s first event is sure to be fascinating. And while it’s hard not to have some misgivings – about the performance of the cars and the layout of the tracks (particularly this weekend’s chicane-infested tour of Beijing’s Olympic Stadium) – these should be set aside and Formula E judged on the strength of the racing it produces.

The cars look great, there’s plenty of good names in the driver line-up and I know from experience with A1 Grand Prix I will appreciate some extra racing action during the barren winter months.

Formula E deserves to be greeted with open-mindedness instead of cynicism. But being open-minded does mean taking leave of one’s senses, which brings us to undoubtedly the most controversial aspect of Formula E. For proof that Formula One doesn’t have a monopoly on crass, ill-considered or flagrantly unfair rules, look no further than Formula E’s Fanboost.

It’s hard to say what is worst about it: the gross unfairness of giving more power to the most popular driver, the mealy-mouthed PR guff used to justify it as a means of engaging with fans via social media, or the way it’s reduced top racing drivers to begging for votes on Twitter so they can have the extra boost.

Some may feel that, as with the rest of Formula E’s novelties, Fanboost should be given a chance as well. But just as we don’t need to see a driver being arbitrarily awarded double points at the final round to know it’s a gimmick, we don’t need to watch a race where fans vote for which drivers get extra power boosts to know a driver’s ability should determine their finishing position, not their popularity. In both cases it’s a question of principle.

As with double points in F1, the best we can hope is that those in charge will see sense and get rid of it before it spoils an otherwise exciting prospect – which Formula E undoubtedly is.

We’ll be following the first ever Formula E race on F1 Fanatic Live tomorrow. The race start time is 9am with live coverage in the UK on ITV4 starting at 8am.

Will you be watching Formula E this weekend? What do you think of the technology, the format – and the controversial Fanboost? Have your say in the comments.

133 comments on “Give Formula E a chance – but not Fanboost”