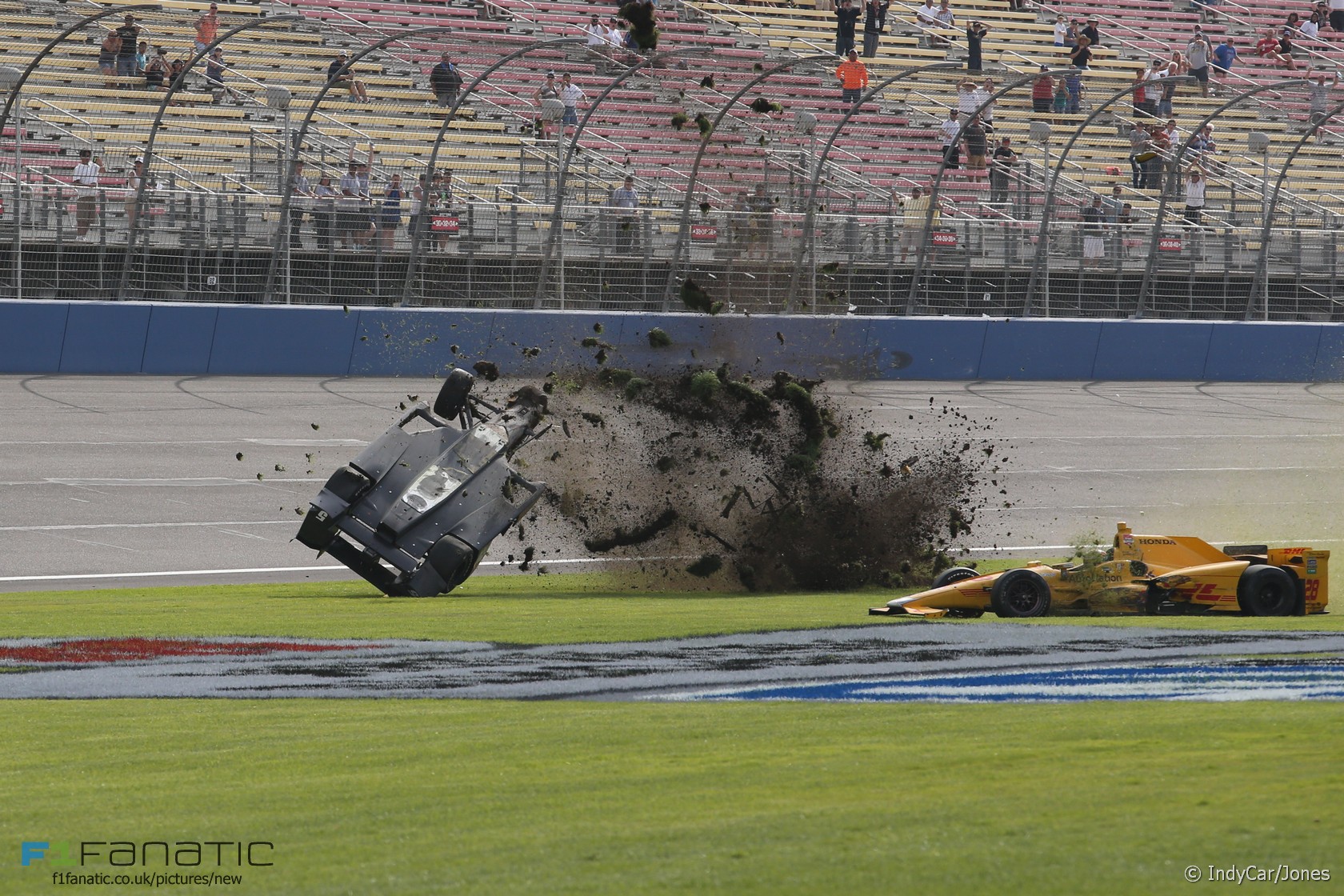 The first Formula E championship was won by a single point in the final race, while a penalty for the first driver across the line meant the season ended with a home win.

However several IndyCar drivers were angered by Saturday’s race at Fontana at which it became clear that increased downforce levels had led to the return of ‘pack racing’ – a phenomenon which was widely blamed for the 2011 crash at Las Vegas which claimed the life of Dan Wheldon.

Graham Rahal won the race which ended with Ryan Briscoe flying through the air in a major crash. Meanwhile in European Formula Three, where driving standards have been a major cause for concern recently, Michele Beretta was the latest driver to be sent skywards.

The first of two races around Battersea Park in London began behind the Safety Car due to concerns over a bump in turn one. An extra barrier was added at the corner and yellow flags were stationed there throughout the race.

Sebastien Buemi eased to victory from pole while. Title rivals Lucas di Grassi and Nelson Piquet Jnr tangled early on without damage, but both finished the race which was interrupted by another Safety Car appearance when Daniel Abt crashed at the final corner.

That set up Sunday’s title-deciding race perfectly, with Buemi now within five points of Piquet. And when rain interrupted qualifying, leaving the championship leader 16th on the grid. Di Grassi, now an outside in the title fight, started 11th, five places behind Buemi.

However an error by Buemi following his mandatory car change ended up costing him the title. A quick spin let Bruno Senna through, and Buemi ended the race desperately trying to retake the position. Meanwhile Piquet’s latest team mate Oliver Turvey had waved him by, and by passing Salvador Duran around the outside Piquet now held the eighth place he needed to grab the title by a point.

At the sharp end of the field Sam Bird lunged past Loic Duval for second place, and then harried race leader Stephane Sarrizan until they crossed the finishing line. Sarrazin’s battery meter dropped to 0% on the final tour, yet his car plainly still had some juice left in it, but after taking the flag he was given a 49-second penalty for hitting zero.

The result meant delight for Piquet. Having left F1 under a cloud when his involvement in ‘Crashgate’ was revealed, he clinched his first title since taking the British Formula Three crown eleven year ago. Reigning World Endurance Champion Buemi hasn’t had to wait that long, but he will be ruing the error his EDAMS team made in Moscow by holding him for ten seconds longer than the minimum pit stop time.

Graham Rahal ended his seven-year IndyCar victory drought, but that wasn’t the main talking point from Saturday’s race at Fontana.

The return of ‘pack racing’ led many drivers to speak out after the race. The field was compressed within five seconds while running at well over 200mph for much of the race.

Despite that ran caution-free for the first half. But with the field so close, and the fights for position growing more intense with ever lap, accidents were a near inevitability. In the final laps Ryan Hunter-Reay and Ryan Briscoe collided, sending the latter cartwheeling along the grass after his nose dug in to the turf.

Tony Kanaan, who finished second, said he felt lucky just to be alive after the race. Rahal’s win was further tinged with controversy as he left the pits with his fuel hose still attached at one point, yet avoided a penalty. Juan Pablo Montoya also voiced concerns about the racing, but left California with a 46-point lead after finishing fourth behind Marco Andretti.

Rookie and points leader Charles Leclerc impressed in a rain-soaked first race at the Norisring, leading his considerably more experienced ricals Antonio Giovinazzi and Felix Rozenqvist home. The race began and ended behind the safety car due to the weather.

However following the incidents at Monza and Spa the debate over driving standards refuses to go away. In race two Michele Beretta was inverted by Matt Solomon at the hairpin, bringing out the Safety Car for one of its four appearances in 36 laps. However Maximilian Gunther took a fine maiden victory in the category, passing three of his rivals to reach the line first ahead of pole sitter Alexander Albon and Leclerc.

Antonio Giovinazzi won the third race of the weekend after taking the lead at the start, but had to deal with three restarts as collisions once again dominated proceedings, one of which involved Gunther. George Russell kept his nose clean to finish second and Albon – who started on pole once again but got a poor start – completed the podium. Giovinazzi is now 42.5 points behind Leclerc as the series passes the halfway mark.

The first DTM race of the weekend saw the drivers tasked with a tough decision: wet or slick tyres for a drying track? Mercedes development driver Pascal Wehrlein judged it perfectly and fitted slicks to claim the second win of his career. Despite a nervy opening ten laps where it looked like wets were the right call – the seven drivers who opted for them had pulled out over four seconds a lap – Wehrlein managed to stay just close enough to capitalise when they finally came in for slicks. He fought off competition from fellow Mercedes drivers to claim the win.

In race two Robert Wickens repeated his 2014 win at the track with a comfortable margin over second place. He overtook Bruno Spengler on lap 14 and was followed through by fellow Mercedes man Christian Vietoris, with the order remaining the same until the flag. Ex-F1 driver Timo Glock retired early on after losing the bonnet of his car while race one winner Wehrlein finished fifth.

At the home event for Citroen squad and drivers Yvan Muller and Sebastian Loeb, it was the latter who put his team mates in the shade in qualifying. Muller completed an-all French front row, relegating Jose Maria Lopez to third. The race ran to a predictable pattern: Loeb took his third win of the season with his team mates finishing in formation behind.

Race two saw a bit more action as Lopez claimed victory from eighth on the grid, although it wasn’t with controversy as he clashed with Tiago Monteiro while passing the Honda driver for second. His pass on race leader Michelisz was more straightforward and Lopez won for the first time in three rounds to re-assert his place at the top of the points table.

It was no surprise to see BMW trio Sam Tordoff, Andy Priaulx and Rob Collard take the victory spoils at Croft, a circuit which suits rear-wheel-drive cars. Priaulx’s race one victory the first since his comeback, though he was made to work hard for it having started second behind Tordoff. A lunge down the inside at Tower – which Tordoff never looked like defending – did the job, and netted a confidence-boosting win.

Fastest lap in race one meant Tordoff started race two from pole, but this time he refused to let victory slip through his fingers. He came under fierce attack from Jason Plato, who started second and was running with no success ballast.

Plato had played the rule book to perfection: having qualified 12th for race one he elected not to scrap in the midfield for a small points reward, and instead started from the pit lane and treated the race like a qualifying session. The result was a lap time quick enough for second place, where he finished, three seconds behind Tordoff, but these were surely not the sort of tactics the rule-writers had in mind. But Collard fought back, and Priaulx made it a BMW one-two.

Lewis Hamilton’s younger brother Nicolas made his debut this weekend and finished all three races, albeit always near the tail of the 30-car field. Heading into the summer break Shedden leads the championship, ten points ahead of Plato with Matt Neal 12 further back.

Of the 36 races on the NASCAR schedule, just two take place on road courses. The first, at Sonoma, saw the Busch brothers Kyle and Kurt take their first one-two.

Jimmie Johnson held a commanding lead at one stage but electing not to change tyres under a later yellow flag cost him his victory chance. Johnson fell to sixth, but four wins earlier this year means he is already guaranteed a place in the championship shoot-out.

The race was red-flagged at one stage after a collision between Martin Truex Jnr and David Ragan damaged a concrete wall.

Auto GP’s third round at Paul Ricard was cancelled due to a lack of entries.

Did you see any of these races over the weekend, and what were your thoughts? Or was they anything you saw that we haven’t covered, let us know below.

Next weekend the main event is the Formula One British Grand Prix, supported by GP2 and GP3. However we also have the World Rally Championship from Poland – home event for ex-F1 turned rally driver Robert Kubica – World Rallycross from Sweden, Euroformula Open from the Red Bull Ring and NASCAR from Daytona.