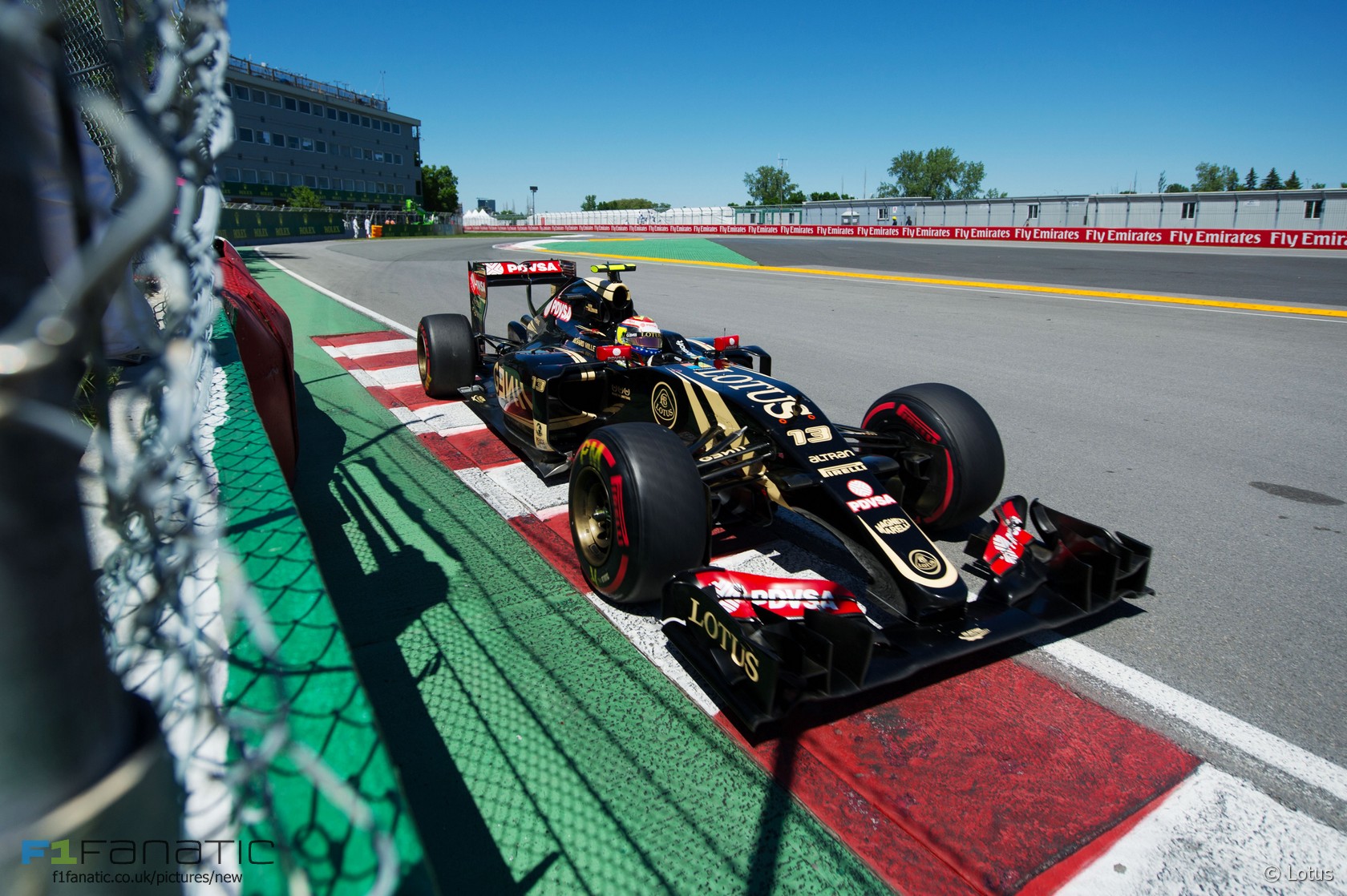 The F1 Fanatic 2015 Driver Rankings begin today. Each article will focus on an individual driver and features a race-by-race profile of their entire season. The next two parts of the rankings will appear later today. Only drivers who started at least five races are included.

Pastor Maldonado’s status as a latter-day Andrea de Cesaris has been cemented by the emergence of a website dedicated solely to informing the world whether or not he has crashed today.

His 2015 campaign was not strewn with quite as much wreckage as previous efforts, but there were still far too many mistakes and not enough strong performances to make them anywhere near excusable.

There were two brief periods when Maldonado hit a decent vein of form. In Monaco – dependably one of his strongest venues – his out-qualified team mate Romain Grosjean only to be struck down with a technical problem in the race. He backed that up with solid points scores in Canada and Austria – the latter punctuated by a spectacular pass on Max Verstappen. Later in the year he strung together a trio of points hauls in Japan, Russia and the USA.

The rest of his season was riddled with unnecessary mistakes. At times they were born of being too uncompromising with rivals: his lap one squeeze on Felipe Nasr in Australia left him in the wall on a day when big points were in the offing. He did the same with his team mate in Spain which left Maldonado with a damaged rear wing and eventually forced him out.

But more often he was simply careless and the errors simply piled up: in Hungary he wandered into Sergio Perez then collected penalties for pit lane speeding and overtaking during a Safety Car period. He locked up on his way into the pits in China, then had an unforced spin later on. Small wonder he made more trips to the stewards than any other driver.

He was utterly outclassed by Grosjean, suffering a 17-2 qualifying defeat which was greater than that of any driver, and usually took the chequered flag after his team mate as well.

Life in the midfield inevitably leads to a few bumps and retirements. Maldonado wasn’t to blame for every incident he was involved – notably in China, Britain and Italy. But in a 19-round championship he only managed half-a-dozen adequate performances – that’s simply not good enough.

Australia – Had he given Nasr’s Sauber a little more room in turn two, a top five finish would have been possible. “It’s disappointing because it was a great chance for us to have a great race,” he said.

Malaysia – Was near the end of the queue in Q2 and missed the cut for the top ten. In the race he suffered and puncture at the start and was penalised for driving too quickly during the Safety Car period, then retired with a brake problem while running behind Grosjean.

China – Missed out on Q3 by three hundredths of a second. Blamed a braking issue for his pit entry lock-up, had no one else to blame for his spin a few laps later but was blameless in the collision with Button that forced him into retirement for the third consecutive race.

Bahrain – In Q1 his front brakes were continuing to apply pressure even when he wasn’t using them, causing a loss of a straightline speed, meaning he was unable to progress to the next stage. He also picked up a five-second penalty for failing to take his place properly on the grid. But with plenty of soft tyres he was able to make rapid progress on a three-stop strategy and probably would have finished in the points had his engine not stopped during his final pit stop.

Spain – Gearbox trouble limited his running in first practice. Having qualified behind Grosjean he passed his team mate early in the race but picked up rear wing damage as he did, which cost him time at his first pit stop as the broken end plate was removed. This put him back down the order, and the team later decided the limited potential for points scoring was not worth the risk of incurring further damage.

Monaco – Produced his best qualifying performance so far at a track where he usually excels, but retired early on with a braking problem.

Canada – Backed up Grosjean in sixth despite a spin early in qualifying. Having lost a place to Hulkenberg at the start he pitted early and ran the longest stint of any driver – 53 laps on the soft rubber – to take his first points of the season for seventh.

Austria – Demonstrated Lotus’s potential with the fourth-fastest time on Friday, ahead of Hamilton, but blamed traffic for failing to accompany his team mate into Q3. He seemed to be distracted by Ericsson’s jump start and lost two places on the first lap, but recovered to finish seventh. On his way he jumped past Perez in the pits, and held on to some increasingly lurid slides as he found a way past Verstappen.

Britain – Like Grosjean, Maldonado also dropped out in Q2, and was also eliminated in the first-lap collision at Village.

Hungary – Lotus missed the beginning of final practice as Pirelli had withheld their tyres due to a payment dispute. The timing of the red flag in Q2 was unfortunate for him, though it was for several other drivers too, and he ended up missing the cut. His race was a depressing litany of mistakes which a driver in his fifth year of F1 should not be making: contact with Perez, speeding in the pits and overtaking under the Safety Car. And yet somehow his penalty points total only increased by two.

Belgium – Crashed on the approach to Pouhon during practice, much as he did last year, but made it into Q3 and eventually lined up seventh. However two laps into the race his car shut down – the team suspect it was triggered when Maldonado hit a kerb too hard.

Italy – Both Lotus drivers were out early on as Maldonado also sustained damage on the first lap.

Singapore – Like Raikkonen at Ferrari, Maldonado couldn’t find the grip his team mate had on the softest rubber, but with Lotus further down the pecking order the difference between the two meant Maldonado was out in Q1 while Grosjean reached the final round. Like Grosjean he struggled with his long stint on soft tyres, unlike Grosjean he found it necessary to risk collisions as faster cars came past him, with the usual result.

Japan – Didn’t make it into Q3 but seemed happier with his tyres at the end of the race than Grosjean. Followed his team mate home for useful points.

Russia – Was one of only three drivers to run the alternative strategy to the end, but despite leaving his tyre change until lap 31 he felt his car performed poorly on super-softs at the end of the race. He hung on for seventh place.

United States – Stayed out of trouble on his way to eighth place but was puzzled as to why he didn’t have better pace.

Mexico – Lined up behind Grosjean as usual and kept it clean in the race – despite a brief off at turn 12 – and finished right on his team mate’s tail, albeit aided somewhat by the Safety Car.

Brazil – Couldn’t get the back of the car to behaved as he wishes, made several set-up changes, and ended up failing to get out of Q1. He gambled on starting the race on medium tyres but was given a five-second penalty after carelessly hitting Ericsson. He lost places to two of his rivals in the closing stages before being promoted to the final point when Massa was disqualified.

Abu Dhabi – Qualified 13th but was taken out by Alonso at the first corner.

Most of the time he was nowhere near his team mate. Must up his game a lot as he’s supposed to be Renault’s leading driver next season.
@Diceman

What’s your verdict on Pastor Maldonado’s 2015 season? Which drivers do you feel he performed better or worse than? Have your say in the comments.

Add your views on the other drivers here: