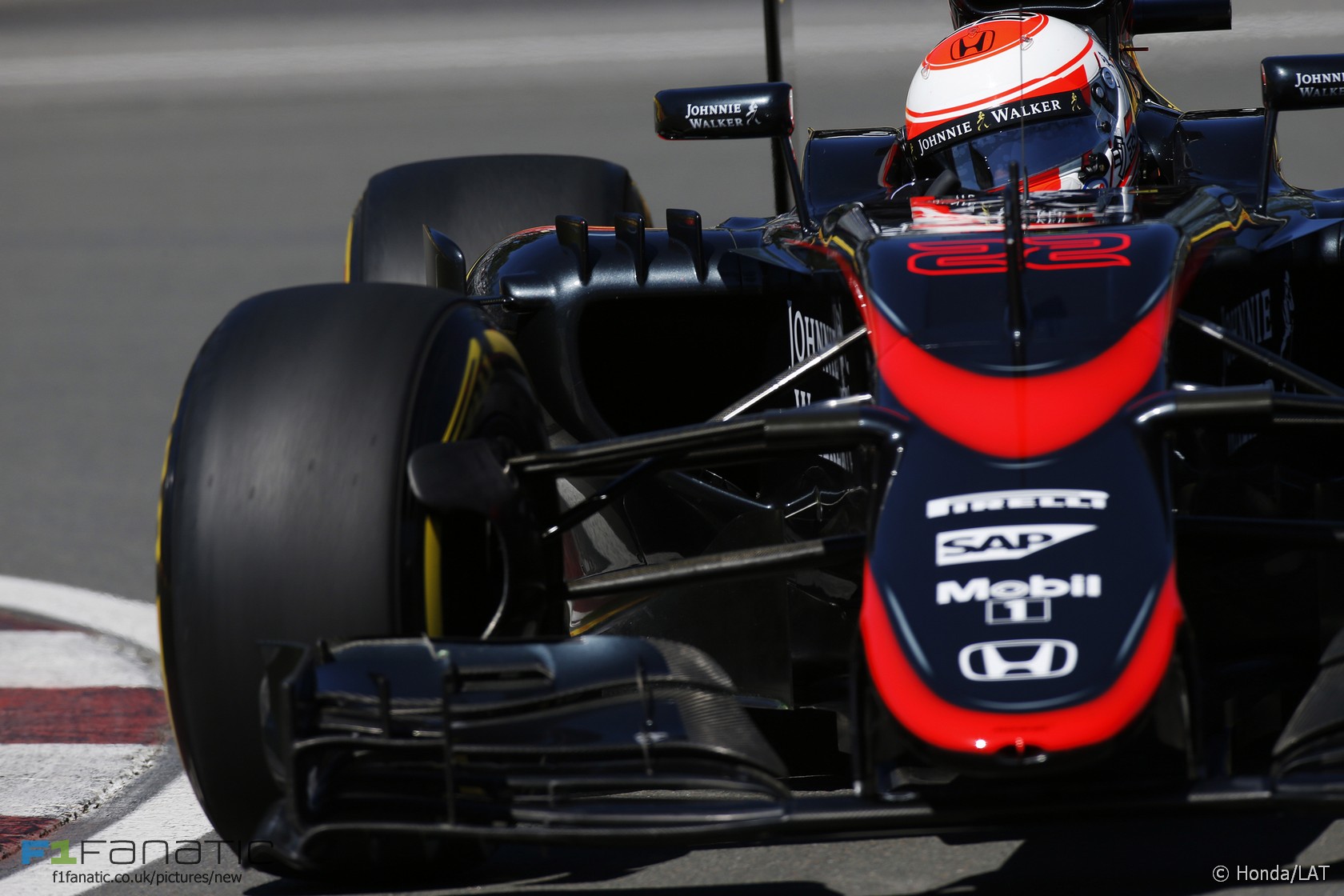 This year Jenson Button achieved something no other Formula One driver has ever done: scored more points than Fernando Alonso* while driving for the same team.

Button will surely be as aware as anyone that the unreliable nature of the McLaren MP4-30 the pair drove this year makes a problematic basis for comparison between the two. But it may still have been a minor source of satisfaction for the driver who lost his Renault seat at the end of 2002 to Alonso.

Like Alonso, Button could never be quite sure how taxing a day to expect when he showed up for work. On more than one occasion his car refused to let him join in a qualifying session or race. But on the rare occasions when the car worked and did at a venue which did not have too many long straights, Button delivered.

Monaco was not his best result but it was probably his best weekend. His first run in Q2 put him inside the top ten but he had to abandon his second attempt when Nico Rosberg brought the yellow flags out. Sergio Perez beat him to the cut by a tenth of a second, but in the race he brought his car home eighth. He added more points in Russia and the USA, the latter thanks to a late gamble on tyres during a Safety Car period.

Low points included another disappointing home race which ended in a first corner tangle, and a very un-Button collision with Pastor Maldonado in China.

Much like Alonso, at times Button’s frustration threatened to get the better of him and there were more than a few terse radio messages. But he clearly wants to stick around long enough to see the project come good, and at the end of his 16th season he is obviously still up for the fight.

Australia – Got within a five-hundredths of a second of Ericsson’s Sauber in qualifying. Using conservative engine settings he got the McLaren to the end of the race, and even managed a brief scrap with Perez. He found quite a bit more pace on his final lap too.

Malaysia – Few of Alonso’s recent team mates have kept him in sight as successfully as Button did during the brief amount of time both were on track during the Malaysian Grand Prix. Like Alonso, Button also failed to finish, in his case due to a turbo failure.

China – An encouraging tenth in second practice, but the pace was not there for the team in qualifying and 17th on the grid was likely the best he could achieve. Button lost out to Alonso at the start and ran the Medium tyre in his last stint. Button admitted the collision with Pastor Maldonado was a misjudgement and he received a five second time penalty and points on his superlicense as a result.

Bahrain – A wasted weekend – electrical problems kept him from setting a lap in qualifying and despite being given a dispensation to start the race he was unable to do that either due to further technical trouble.

Spain – Set the eighth-quickest time on Friday and accompanied Alonso into Q2 – a first for the team this year. However he was disturbed by his car’s handling in the first half of the race, and though it improved later on he could only manage 16th in front of the two Manors.

Monaco – Was certain he would have reached Q3 had he not lost time due to yellow flags brought out by Rosberg spinning. He inherited two places to start tenth, and capitalised on retirements ahead of him to finish eighth and deliver McLaren’s first points of the season.

Canada – A power unit failure at the end of final practice meant Button was a spectator in qualifying, much as he was in Bahrain. He also had to serve a drive-through penalty after changing power unit components, and just as he was relishing the prospect of bolting on super-softs for a late push, his car broke down too. An abject weekend for McLaren.

Austria – Eliminated in Q1 having been one of the first drivers across the line after the chequered flag came out on a drying track. That meant his 25-place penalty became a stop-and-go penalty for the race. Button was all in favour of getting his mandatory pit stop out of the way behind the Safety Car, meaning he could run to the end of the race after taking his penalty. But we’ll never know how that would have worked out, as his car developed a problem and his team elected to stop rather than risk losing another power unit.

Britain – Sounded very unhappy with his car’s balance throughout practice, so it was no surprise to see him line up with just the Manors in his mirrors. The melee at turn one brought an early end to his 16th home race.

Hungary – Baffled by his car’s behaviour in final practice, but would have made the cut for Q2 had it not been for a power unit problem which robbed him of ERS delivery on the straight. Unlike Alonso, Button did not pit to change tyres under the Safety Car, and he was powerless to prevent his rivals demoting him to ninth. Nonetheless, this was McLaren’s first double points score of 2015.

Belgium – This was always going to be a weak track for McLaren and with little gain being realised from Honda’s revised power unit so far Button could do no better than 17th, one second off the next car, despite producing a lap he was proud of. However his ERS only worked intermittently during the race, periodically leaving him without full power, and after a lonely run he took the chequered flag in 14th.

Italy – Qualified 16th, took a five-place grid penalty but started 15th as the back rows were filled with those who had taken even more penalties. He took advantage of the chaos at the first corner to briefly hold ninth place. However his car’s lack of straight-line speed left him “waiting for the other cars to come by,” he explained. “The other drivers were overtaking me in places that I didn’t previously think were possible.”

Singapore – Generally a few tenths off Alonso’s pace, he scraped into Q2 with his final run. Was kept busy with settings changes during the race as he followed Alonso into the top ten, but tangled with Maldonado and damaged his front wing. Soon afterwards he too was struck down with a gearbox problem.

Japan – Pointed out he’d been given the wrong engine settings for what turned out to be his only flying run in Q1 before yellow flags disrupted the end of the session, costing him a chance to reach Q2. Like Alonso the places he made up at the start were swiftly lost due to the Honda’s lack of top end – two cars passed him at once when the DRS zone was activated on lap three. Being jumped by Ericsson at his second stop kept him from finishing closer to Alonso.

Russia – Unlike Alonso, Button made it through into Q2 and qualified an excellent 13th which is his best result this year besides Monaco. Despite being a “sitting duck” in the race – Nasr and Maldonado blasted past in his final stint – Button mimicked Perez’s stint and hung on for ninth place.

United States – McLaren went the other way with Button at the end of the race, giving him a new set of softs with a dozen laps to go. He made great use of them, overcoming the McLaren’s weaknesses with passes on Ricciardo and Sainz. The latter eventually got back ahead, but Button stayed close enough to be promoted up to sixth by Sainz’s five-second penalty.

Mexico – The nadir of a particularly bad season? Power unit problems throughout practice meant he couldn’t take part in qualifying and racked up a record 70-place grid penalty. McLaren’s straight-line speed deficit was even worse than usual in the thin Mexican air, and Button came home a distant 14th.

Brazil – Confessed to struggling with his car in practice – Alonso’s problems meant Button had to shoulder more of the development work – but felt it was running better in qualifying, even though he couldn’t make it out of Q1. Like Alonso he started well but was easy meat for more powerful cars on the main straight.

Abu Dhabi – Started 12th and finished one place lower, but managed to repel the Williams of Bottas for five laps at the end. That left him considerably more upbeat about the team’s prospects heading into the winter than his team mate was.

About as good as you could have hoped for given the car.
@Rob91

What’s your verdict on Jenson Button’s 2015 season? Which drivers do you feel he performed better or worse than? Have your say in the comments.

Add your views on the other drivers here: