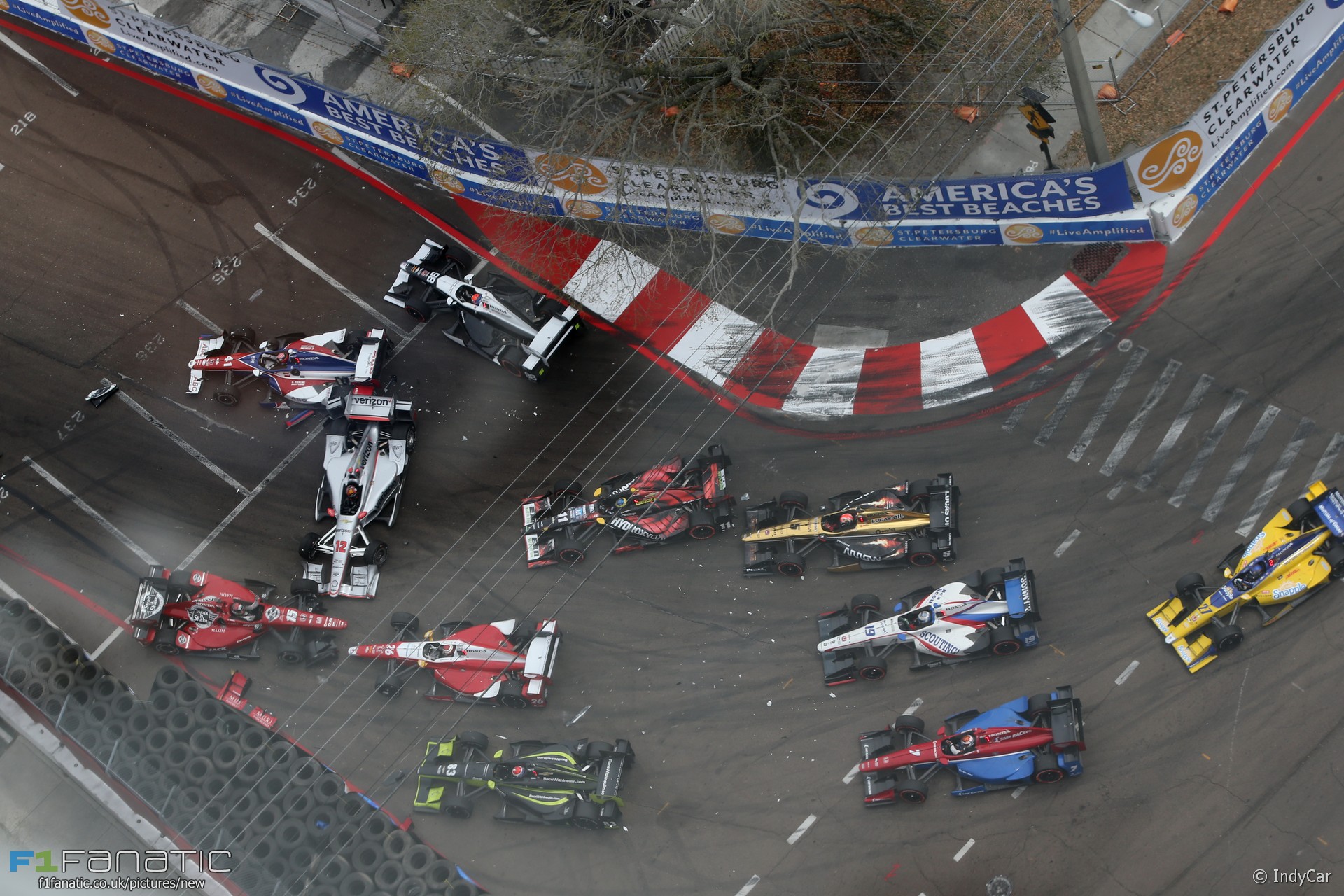 In a strange start to the IndyCar season the pole sitter for the first event of the year was forced to miss the race due to injury.

Friday practice went some way to deciding the outcome at St. Petersburg as a crash by Will Power (first video) eventually ruled him out of the first race of the season with concussion, despite him taking pole position on Saturday. This promoted team mate Simon Pagenaud to pole position and he duly took advantage, opening up a comfortable lead in the first half of the race.

Marco Andretti brought out the first caution of the season when he span, recovered and then stalled at turn one, and this quickly led to the second on the restart. After Juan Pablo Montoya jumped Pagenaud at turn one for the eventual lead, further back Carlos Munoz tagged Graham Rahal into a spin at the tight turn four (second video) and a chain reaction led to a nine-car pile-up. Amazingly all bar Sebastien Bourdais escaped without race ending damage.

As the race reached its final stages Montoya complained of a problem with the car – later discovered to be a broken steering arm. But had just enough to hold on for his second opening day victory in as many years, denying Pagenaud a maiden Penske triumph. Ryan Hunter-Reay completed the podium.

When the chequered flag fell on Formula E’s first Mexican round the story was of a race decided by its contentious FanBoost system. Lucas di Grassi used the extra power to slip past Jerome d’Ambrosio and while he disappeared off into the lead D’Ambrosio was left to fight an increasingly fraught rearguard action against Sebastien Buemi.

Without Fanboost this gripping scrap would have been for victory and as things turned out it was. Di Grassi fell foul of a post-race technical inspection – his first car was found to be underweight – and D’Ambrosio was promoted to a hard-earned victory.

Buemi, who started fifth after slipping up in qualifying, pushed D’Ambrosio every millimetre of the way. He ran into his rival at one point, then got ahead by jumping one of the many chicanes around the truncated Autodromo Hermanos Rodriguez track. Buemi wisely attempted to concede the position but succeeded only in costing D’Ambrosio more places, which the Dragon driver then regained by cutting the final chicane before being waved past by Buemi.

Abt did not appeal Di Grassi’s disqualification – the car was a whopping 1.8 kilograms too light. That meant instead of leaving Mexico leading the championshi pby six points, Di Grassi trails Buemi by 22. Bizarrely, this was Di Grassi’s second disqualification from victory in Formula E’s 16-race existence, and just as in Berlin last D’Ambrosio and Buemi were the benefactors.

For the second time in four NASCAR races the leaders crossed the finishing line side-by-side with just one hundredth of a second in it. Stewart-Haas racer Kevin Harvick was the winner this time, edging out Carl Edwards after a robust attack from his Joe Gibbs rival around the 313th and final lap.

Harvick, the fourth different winner in as many races so far this year, shares the lead in the points standings with Kyle Busch.

Which of these races did you manage to watch or attend? Or did you enjoy something we haven’t covered? Let us know in the comments.

Next week the 67th running of the Formula One world championship begins with the Australian Grand Prix at Albert Park in Melbourne. It will be supported by the V8 Supercars series, though due to a rights clash with Formula One Management theirs will be a non-championship round.

Over in America the 12 Hours of Sebring – round two of the IMSA series – takes place, and the NASCAR field heads to California’s Fontana superspeedway.

Thanks to Robert Mathershaw (@Mathers) for contributing to this article.