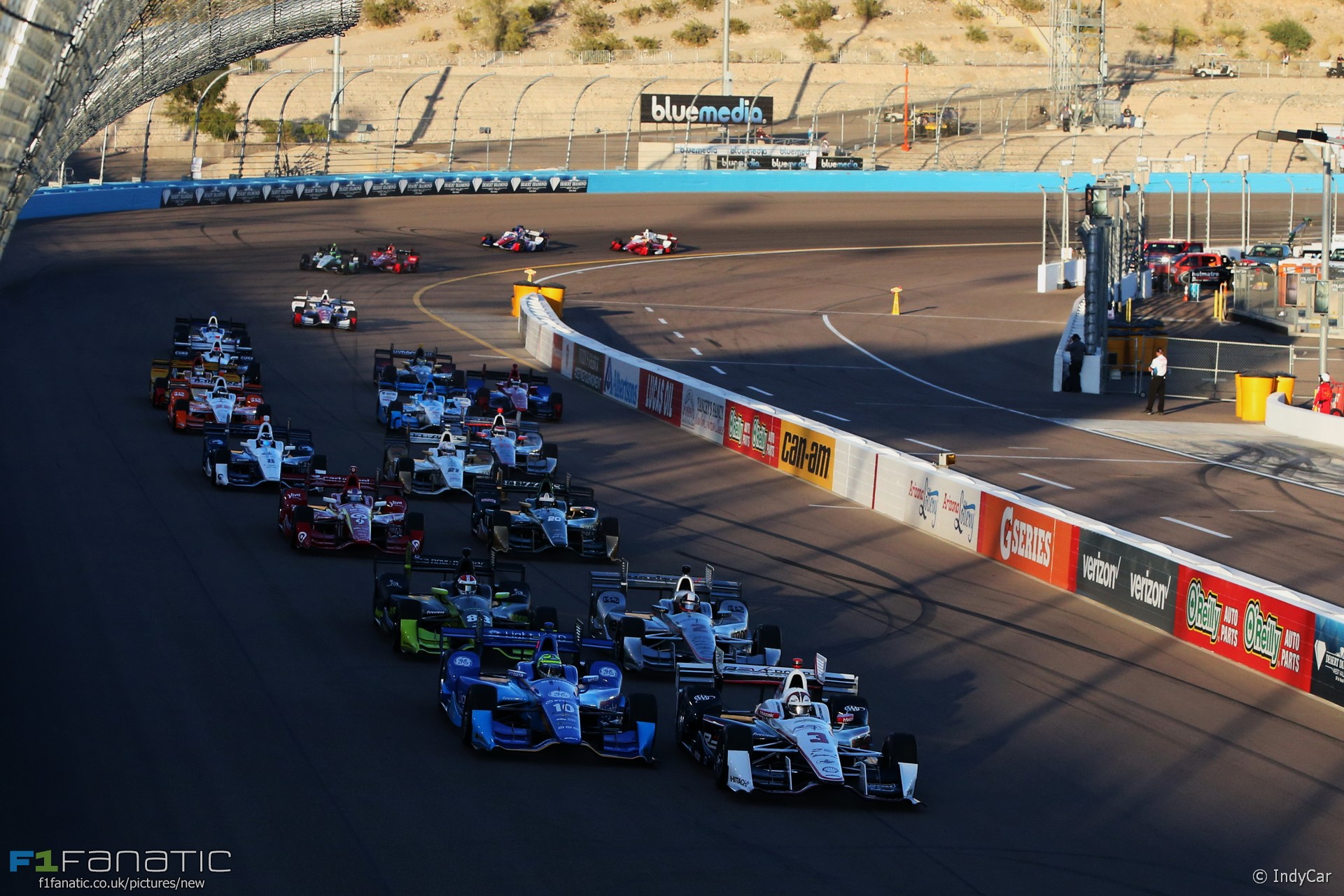 Indycar made its first trip to the Phoenix International Raceway oval since 2005 while the BTCC, WTCC and European Formula Three championships kicked off in style.

Elsewhere the Formula E race winner managed to hold on to his victory in Long Beach, the Australian V8s headed to Simmons Plains Raceway and NASCAR continued at the tight Martinsville circuit.

Reigning champion Scott Dixon took his first win of the season as the series returned to Phoenix in a race that ended under caution following Alexander Rossi’s late crash. Dixon was assisted on his way as two main rivals – Helio Castroneves and Juan Pablo Montoya – both suffered front-right punctures while leading.

Simon Pagenaud took the championship lead after finishing runner-up again, while Will Power was third on his return to the cockpit from injury.

For Pagenaud read Nick Cassidy in European Formula Three: second places in each of the first three races in Paul Ricard put him at the head of the points table.

Williams junior driver Lance Stroll opened his season with a victory at Paul Ricard. He led home team mate and early leader Cassidy, whom Stroll passed on lap two, and George Russell in the opening race.

Callum Ilott took his maiden victory in the second race ahead of Cassidy once more – who again had been leading but made a mistake when rain began to fell. Ferrari junior Guan Yu Zhou completed the podium. Stroll’s race one win high was dampened as he was eliminated in a first corner crash that called for the Safety Car.

Maximilian Gunther took the honours in the final race as Cassidy made a clean sweep of second place ahead of Joel Eriksson, who’d had an impressive race having started seventh.

But plunging entry numbers will be a cause for concern in the championship: 35 cars took the start of the season-opening race 12 months ago, but just 21 cars appeared in France.

Lucas di Grassi was the first man home for the second race running in Formula E – but unlike in Mexico he got to keep his win this time. However the same couldn’t be said for original pole sitter Antonio Felix da Costa, who was sent to the back of the grid after a faul was found with his tyre pressures.

That promoted Sam Bird to pole position but Di Grassi passed the DS on lap 12. He held the lead to the chequered flag despite a late Safety Car period triggered by Nelson Piquet Jnr. Bird crashed late on but recovered to take sixth place.

Di Grassi’s win propelled him back into the championship lead by one point as Sebastien Buemi, who held a 22-point lead going into the sixth round, ruined his race by crashing into Robin Frijns. It was a double disappointed for EDAMS Renault as Nicolas Prost was penalised for exiting the pits too soon after his car change.

Hugo Valente started the first race from pole position thanks to the reverse grid rules. The new Lada driver made a poor getaway, however, and Rob Huff surged into a lead he never lost. Yvan Muller started his season fractionally too soon and was handed a penalty for a jump start, ensuring he failed to collect points while Mehdi Bennani and Norbert Michelisz completed the podium.

In race two the fastest man in qualifying – Jose Maria Lopez – started on pole and duly took the win and championship lead, but only after a hard-fought battle with Tiago Monteiro. Michelisz once again took the third step on the podium as he followed Monteiro through past Muller on lap eight. Tom Coronel stalled at the start, triggering carnage.

Shane Van Gisbergen claimed victory in the opening race to mark his first win of the season and Holden’s 500th in Australian touring car racing. Reigning champion Mark Winterbottom started on pole but lost out in the early first round of pit stops with Jamie Whincup taking the lead, but he was soon deposed by Van Gisbergen with Will Davison completing the podium.

Davison was due to start race two on pole but was handed a two-place penalty for blocking, however he made amends in the race by taking the win, albeit with a large portion of luck. Van Gisbergen and Winterbottom – who had been the leaders – were caught out by oil with a couple of laps to go, handing Davison his first win of the season and the championship lead. Lowndes finished runner-up while Winterbottom recovered to third, but Van Gisbergen retired.

Kyle Busch took victory at Martinsville Speedway having led 352 of the 500 laps, ahead of AJ Allmendinger, Kyle Larson, Austin Dillon and Brian Vickers.

Video not available yet.

After taking pole position, Tom Ingram led a manic first race from lights-to-flag to take his maiden win in the BTCC ahead of the Hondas of Gordon Shedden and Matt Neal.

Shedden took the spoils in race two after Ingram and Rob Collard made contact, eliminating both cars from the race, with Neal second ahead of Aron Smith in the Volkswagen CC for new team BKR.

In the final reverse grid race, Adam Morgan took win number three of his career, ahead of Sam Tordoff and Jack Goff as Shedden fell out of the race with a puncture late on. Subaru also made their debut this weekend, but struggled with a best result of only 12th for Colin Turkington in race three.

Nico Rosberg won his fifth consecutive race and second from two of the season in Bahrain ahead of Kimi Raikkonen and Lewis Hamilton.

In Moto GP it was Marc Marquez took a comfortable victory in the end from Valentino Rossi and Dani Pedrosa after a chaotic race, the running of which was placed in doubt by failures within the series’ new Michelin tyres during practice.

A rear tyre blow-out for Scott Redding in practice forced a shorter race and mandatory pit stop – unusual in Moto GP – and before the stops Rossi was trading places with Marquez. Reigning champion Jorge Lorenzo was caught out early on a damp patch and crashed. Maverick Vinales looked set to give Suzuki their first podium on their return as a manufacturer outfit, only to fall from third while chasing Rossi on lap 18, but the drama didn’t end there.

Rossi and the Ducati pair of Andrea Iannone and Andrea Dovizioso squabbled over second, third and fourth in the closing laps, with Iannone launching down the inside of Dovizioso late on the final lap and eliminating them both, allowing Rossi to take second and Pedrosa a distant and shocked third.

What racing action did you watch last weekend? And what will you be watching next week? Let us know in the comments.

Thanks to Robert Mathershaw (@Mathers) for contributing to this article.