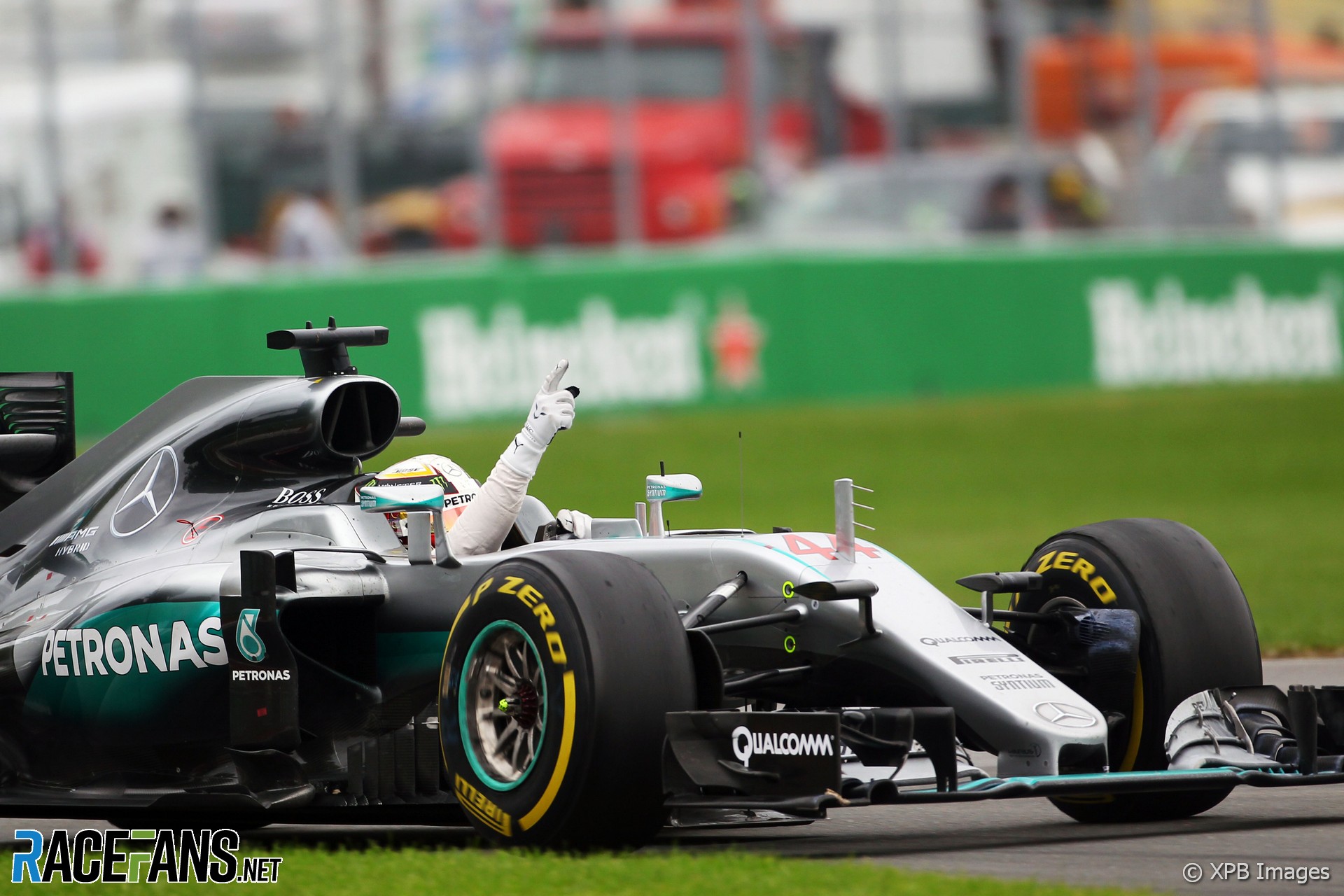 As lap 11 began at the Circuit Gilles Villeneuve race leader Sebastian Vettel momentarily lose concentration as he spied a pair of seagulls as he braked for turn one.

The Ferrari driver locked up and Lewis Hamilton, 1.3 seconds behind and out of DRS range as the lap began, gained several car lengths on him. Vettel made light of the moment afterwards, joking that it cost him the race.

But it was six corners after his encounter with Montreal’s “suicidal” seagulls that Vettel’s chance of scoring his first victory this year were wrecked by his own team.

Red Bull had put Mercedes on alert in Monaco but in Canada it was Ferrari’s turn to take the fight to the silver cars. Vettel had got within two-tenths of them in qualifying, and from third on the grid he launched into the lead with an astonishing getaway.

Pole sitter Hamilton had barely crossed the start/finish line when the Ferrari drew past him. Vettel was so much quicker than the Mercedes he was able to take a normal line through turn one.

So could Hamilton, and with Rosberg optimistically investigating the outside line he took the opportunity to give his team mate some payback for the 2014 race. The two W07s made wheel-to-wheel contact and Rosberg’s was turfed onto the run-off.

Behind them Ricciardo had run slightly deep into turn one allowing Max Verstappen to get alongside him. So when Rosberg stumbled back on-track in front of the Red Bulls Ricciardo had to move tight to the inside to avoid him, handing third to Verstappen.

Rosberg was demoted to tenth at turn six by a lunge from Nico Hulkenberg, leaving the championship leader with a day of damage limitation.

Vettel tore away from the Mercedes on lap one, but cold brakes caught him out at the final chicane and he took a trip across the run-off, allowing Hamilton back onto his tail. The Ferrari driver got his head down and edged clear again.

With all the drivers required to use a set of soft tyres under the rules, and with the leaders all starting the race on super-softs, tyre strategies appeared straightforward. If drivers could eke out the ultra-softs for long enough at the beginning they could get to the end after making a single pit stop.

However the confines of Montreal make Safety Car and Virtual Safety Car periods more likely. In these situations drivers lose much less time during pit stops, which then make a two-stop strategy more attractive.

Around the same time Vettel was having his encounter with the seagulls Jenson Button’s McLaren power unit, which had already seen action in several races, failed on the back straight. Although he pulled up close to an access point the Virtual Safety Car was deployed for the safety of the marshals moving his car.

Vettel’s team knew they had a chance to switch to a two-stop strategy and that if they didn’t Hamilton might do so in order to attack them. Surrendering Vettel’s hard-won advantage of track position was a questionable decision given the performance of the Mercedes, and it quickly turned out the decision was mis-timed.

The VSC period began as Vettel was accelerating out of turn seven, halfway around the track. By the time he passed Button’s car at turn 12 the McLaren had already been moved behind the barrier. The Ferrari crew should have been alert to the likelihood that the VSC period was about to end and remove the advantage gained by pitting, yet not only did they bring Vettel in but Kimi Raikkonen too.

“We tried to take advantage of the Virtual Safety car period,” confirmed team principal Maurizio Arrivabene, but it “lasted way less than expected”. It ended after 63 seconds, just as Vettel was pulling into the pits. The field came back up to racing speed so that when Vettel re-joined the track he had fallen to fourth place, 11 seconds behind Hamilton.

Where would Vettel have been had the VSC remained? Certainly several seconds closer to Hamilton and possibly still as high as second place.

Hamilton now led followed by the two Red Bulls. Verstappen had been saving fuel in the opening laps but after being told not to delay his team mate he picked up the pace slightly.

However the Red Bulls were not able to make their ultra-softs last as long as the leaders. Verstappen came in one lap later, Ricciardo the lap after that, and the extra time lost by the latter dropped him behind Raikkonen.

Making matters worse, Ricciardo flat-spotted one of his tyres soon afterwards, dooming him to an early second pit stop. With Verstappen and Raikkonen also needing second stops, Rosberg potentially had a chance to salvage a podium place.

Following his setback at the start the Mercedes driver had easily passed Fernando Alonso’s McLaren in the DRS zone, then demoted Hulkenberg too. By lap 20 he was running sixth behind the Williams pair, and he was able to jump ahead of Felipe Massa by making an earlier pit stop.

Valtteri Bottas, however, was also one-stopping, and with the benefit of Mercedes power he was able to keep Rosberg behind. When Rosberg developed a right-rear puncture on lap 50, it secured the first podium finish of the season for Williams.

Rosberg reclaimed his positions from Ricciardo and Raikkonen with little difficulty. But Verstappen proved a tougher nut to crack and defended his position from a quicker car on fresher tyres which had the benefit of DRS. Rosberg’s final effort on lap 69 ended with a spin from which he was able to continue still in fifth place.

Vettel continued his pursuit of Hamilton until the end. After his early pit stop he had passed the Red Bull drivers easily on consecutive laps with the benefit of fresh tyres and DRS.

He re-took the lead when Hamilton made his sole pit stop. But as the race passed half-distance Vettel’s lead dipped under ten seconds and it was clear he had no chance of staying ahead of Hamilton after his second pit stop. Sure enough he emerged 7.8 seconds behind after his final visit on lap 37.

Vettel gave it everything he had in his attempts to catch the Mercedes, but could only take a few tenths of a second per lap at most out of Hamilton’s lead. A few more slip-ups at the final chicane put paid to his victory hopes, but realistically they’d been dashed many laps before.

While Ferrari’s decision to pit twice was questionable, they were far from the only team to do so, many struggling to make the tyres work properly in the cool conditions. Hamilton and Bottas were the only points-scoring one-stoppers. Among the others to pit twice were both Force Indias and the recovering Carlos Sainz Jnr, who drove superbly to take ninth place having started on the penultimate row.

Jolyon Palmer and Felipe Massa joined Button in retirement. McLaren’s three-race run inside the points came to an end though Alonso passed Daniil Kvyat for 11th in the final laps.

The two Haas drivers were next and Marcus Ericsson followed them in his Sauber. Team mate Felipe Nasr fumed at a “very unfortunate and an unnecessary move” from Kevin Magnussen which put him in a spin on the first lap, but the stewards did not get involved.

Six years ago a breathtaking race in Canada changed the face of Formula One, bringing about the rise of the high-degradation tyre era. Last year’s processional one-stop affair prompted criticism and led Pirelli to lobby for rules allowing them to introduce a new, softer compound.

The availability of the ultra-soft compound this weekend made the strategy choice a closer decision for teams and it contributed to Ferrari’s dilemma which ultimately cost Vettel the race.

However as in Monaco, Mercedes and Hamilton could count themselves fortunate that their rivals were as incautious about relinquishing the lead and, ultimately, the victory.

24 comments on “Hamilton wins as Mercedes’ rivals slip up again”