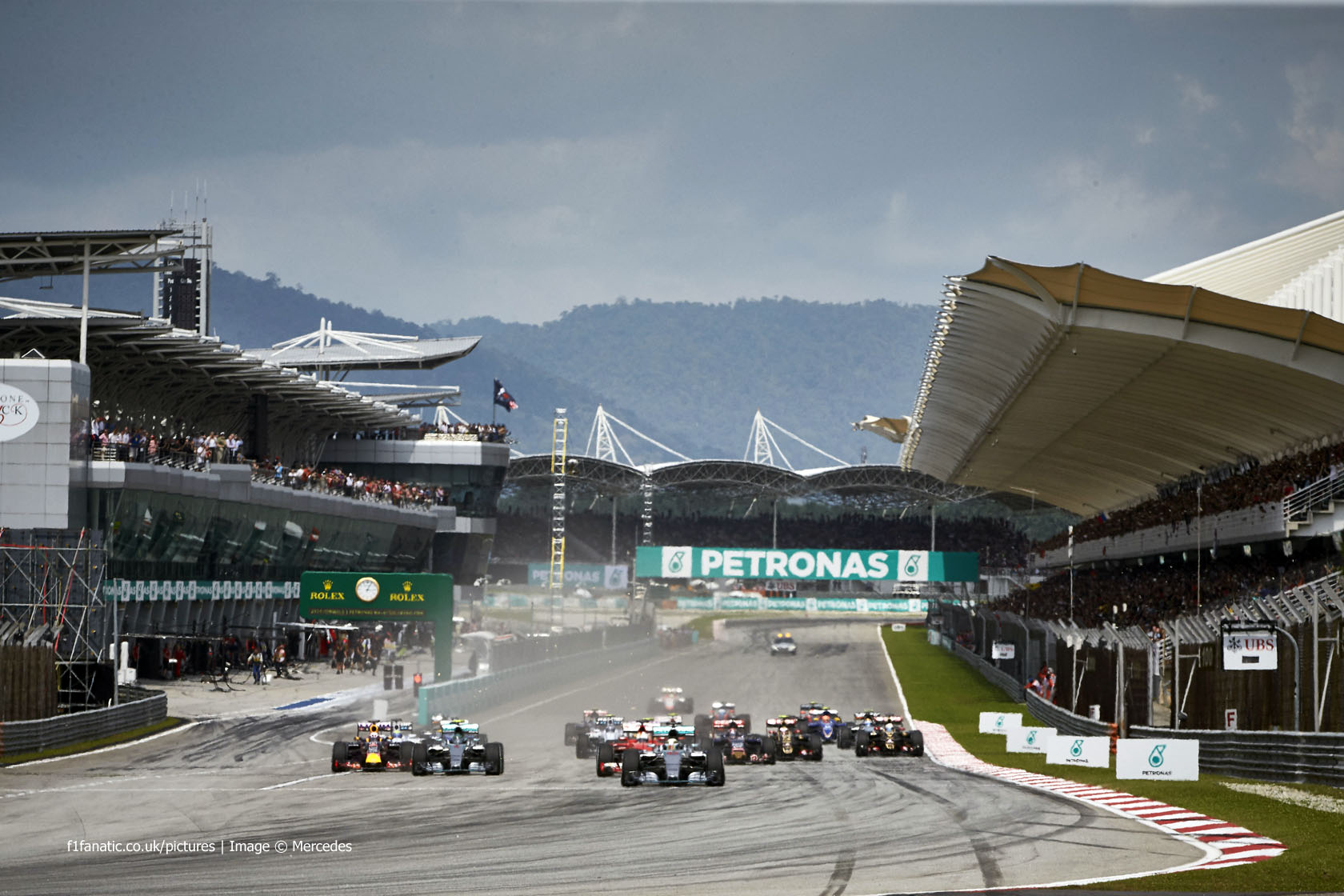 The Malaysian Grand Prix has a new time slot and a refreshed circuit this year. However drivers will have to tackle the same punishing combination of heat and humidity.

This weekend’s race is also expected to see Mercedes wrap up the constructors’ championship. But the drivers’ title fight is far from settled.

Mercedes are likely to clinch their third consecutive constructors’ championship this weekend. They arrive in Malaysia 222 points ahead of Red Bull and will take the title of their lead is at least 215 points on Sunday evening.

Only a strong result for Red Bull or Ferrari, who are a further 15 points behind, could delay the inevitable. Even a repeat of last year’s shock result, where Sebastian Vettel won ahead of the two silver cars and his team mate, would not prevent Mercedes claiming the title.

However Mercedes tend to struggle in hot conditions with tyre degradation and brake cooling. This was apparent in Singapore, though Paddy Lowe confirmed that team radio messages about brake wear in Singapore were precautionary and Nico Rosberg’s victory showed they can contain this vulnerability.

Ferrari are bringing small aerodynamic updates to Sepang that they hope will not only improve downforce, but also assist power unit and component cooling.

Vettel took victory from Mercedes’ grasp in his second race for Ferrari last year. But his second season has been disappointingly win-less so far. He was frustrated by a technical problem last time out.

Kimi Raikkonen has won twice here, once for McLaren in 2003 and again for Ferrari in 2008, but he has not visited the podium in Malaysia since.

Valtteri Battas and Felipe Massa have been a close match in their two previous visits to Sepang as team mates. Massa refused an instruction from Williams to let Bottas past two years ago, and last year Bottas made a last-lap pass on his team mate for fifth place.

The team has identified tyre management as their main weakness compared to their close rivals Force India. Antonio Spagnolo is bedding in after being poached from Ferrari’s technical team ahead of Singapore. They hope his expertise and experience swill bring swift gains, which they need if they are to reclaim fourth place in the championship from Force India.

Both Red Bulls suffered heavily with brake wear and a power deficit in 2015 which hampered their ultimate pace in Sepang. Expectations are much higher this year, especially after coming so close to victory in Singapore two weeks ago.

Max Verstappen also took his first points in F1 here last year, becoming the youngest driver ever to do so.

Both Force India drivers received penalties for separate clashes in the 2015 Malaysian Grand Prix, which both out of the points. This masked a good performance for the team, who tend to be able to manage tyres very effectively in the tropical heat.

They will have to have a clean race this time round to keep their one-point advantage over Williams in the constructors’ championship.

Neither driver has finished particularly well in Malaysia before (Jolyon Palmer raced here four times in GP2) but both are hopeful of a strong showing off the back of a promising Singapore Grand Prix which delivered points for Kevin Magnussen.

However after his trouble in Singapore Magnussen will be anxious not to have to go another race distance without a working drinks bottle, especially at such a hot race.

Their recently introduced upgrade package has left the team with a conundrum. It increases downforce but brings a significant drag penalty. This effect coupled with their lack of horsepower may hurt them more at Sepang, with its many long straights, than Singapore. Reliability, another significant weakness for the team, will also be strongly tested by the Sepang heat.

Daniil Kvyat showed glimmers of a return to form and has said he is enjoying driving in Formula One again after his recent demotion. He needs to keep performing well to have a chance of staying in F1 next year.

Sauber desperately need to score points this year to finish ahead of Manor in the standings to net the extra millions of dollars in prize money that comes with tenth place.

The team are still looking to add strength to their technical team after recent signings to the strategy, engineering and aerodynamics departments. This weekend’s race marks the arrival of strategist Ruth Buscombe, formerly of Ferrari and, earlier this year, Haas.

Fernando Alonso, who has already had to take grid penalties this year for exceeding the maximum number of power unit components, will take more this weekend as he becomes the first McLaren driver to sample Honda’s latest upgrade. It is expected to bring small reliability and performance gains but he may only use it for practice.

Reliability was a concern in 2015, with both cars retiring from the race with power unit related failures in the team’s second start with Honda power since their reunion.

Jenson Button will be very keen to make the finish this weekend in his 300th Grand Prix start, which would be made all the more sweet with a points score. Although less likely in dry conditions, the very unpredictable weather in Malaysia could spring a surprise.

Both Esteban Ocon and Pascal Wehrlein had a tough time in Singapore, but both expect to perform better in Malaysia this weekend. Realistically finishing ahead of the Sauber team is a victory at this stage of the campaign.

Wehrlein has been busy since Singapore, having completed Pirelli’s 2017 tyre test at the artificially wet track surface at Paul Ricard in France driving a modified Mercedes test car.

Esteban Gutierrez has admitted his frustration at finishing just outside the points in 11th place a remarkable five times this year, though he has been less vocal than Romain Grosjean about his struggles of late.

The team were unable to fully reap the benefits of the technical upgrades introduced in Singapore due to a host of problems.

GP3 championship leader and Ferrari protege Charles Leclerc was due to take over driving duties in FP1, but a late scheduling change means he can no longer take part. He will be given an opportunity to do so in Brazil instead.

Are you going to the Malaysian Grand Prix?

If you’re heading to Malaysia for this weekend’s race, we want to hear from you.

Who do you think will be the team to beat in the Malaysian Grand Prix? Have your say below.