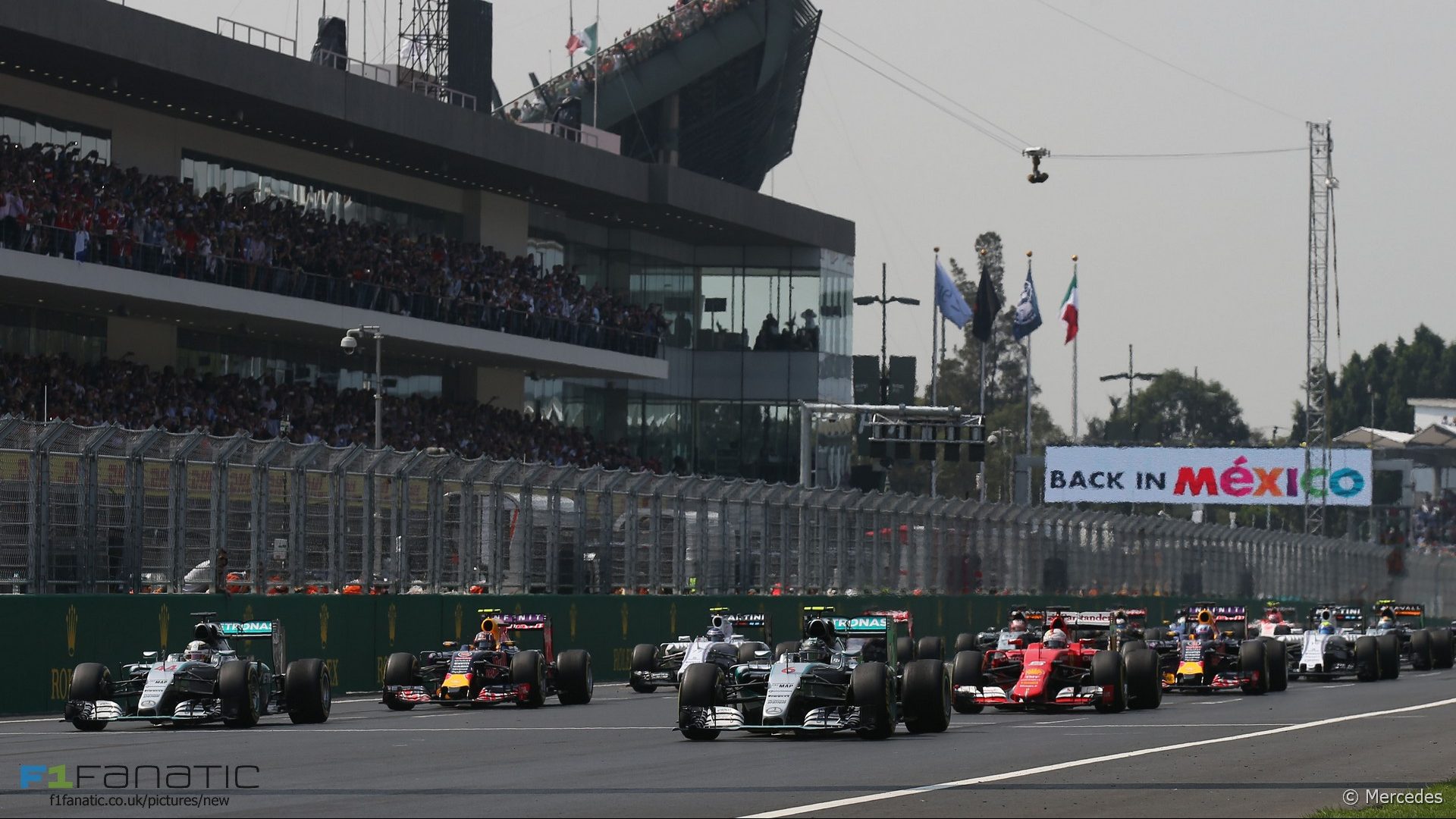 Although the return of the Mexican Grand Prix proved hugely popular last year the race was not especially memorable.

But the prospects for F1’s return to the revised Autodromo Hermanos Reodriguez are rather better. Unlike last year the championship remains in play and there is even an outside chance it could be decided on Sunday.

And as the track has now had 12 months of use the entire field should find it offers more grip and makes for a livelier race.

Did Lewis Hamilton really lose focus at the end of season last year after taking the title? His performance this weekend will be a good litmus test to see whether this is the whole story, or whether Rosberg actually just has an edge at the final three venues, starting in Mexico.

Hamilton trailed Rosberg here in 2015 and fought with his crew on the radio to switch to an alternative tyre strategy to try to beat him. But team orders prevailed and they had to run to the same plan. Hamilton was furious and despite his best efforts he could not find a way to pass his team mate on track, having to follow him home to the flag.

The race start will be crucial once again as the run to the first corner is so long. A slow getaway from the grid will result in a large drop in positions, and if Hamilton makes another of his poor starts it could be the final nail in his title hopes.

Sebastian Vettel’s visit to Mexico in 2015 can only be described as a nightmare. After a slow start he tangled with Daniel Ricciardo at the apex into turn one which resulted in a puncture that ruined Vettel’s race. From there Vettel admitted that he tried too hard to make up for lost time. He looked ragged throughout the race and spun twice at turn seven, the second incident pitched him into the barriers and out of the race.

Kimi Raikkonen was chasing the podium in but a race ending collision with Valterri Bottas meant the Scuderia had their first double retirement since the 2006 Australian Grand Prix.

Ferrari’s superior straight-line performance compared to the Red Bull should stand them in good stead again this year but their form has been highly variable of late.

Williams were very strong in Mexico last year and are likely to feature again this year. Valtteri Bottas had an eventful run to third, pitching Kimi Raikkonen out of the race and overtaking Daniil Kvyat’s Red Bull after the safety car restart on lap 58.

Felipe Massa closed in on the two Red Bull cars ahead of him but was unable to pass, finishing sixth.

Williams set the unofficial top speed record in Azerbaijan earlier this year at 378 kph (234.8mph). They could come close to this again on the very long straight in Mexico. Last year, with the help of a tow, Sebastian Vettel hit 366 kph (227.4mph).

Last year the slippery surface of the newly finished track surface in Mexico and a relative lack of power left the RB11s struggling to fend off the Williams duo.

The intervening months have seen plenty of track action from other series to rubber in the track. Both drivers are expecting the increased grip levels this year to play more to their strengths, even if their Renault power unit may suffer compared to the Mercedes and Ferrari-powered cars.

Force India were disappointed not to extend their championship lead over Williams in the USA after a disastrous first lap which saw Nico Hulkenberg retire and Sergio Perez facing the wrong way after a collision with Daniil Kvyat. The difference is just eight points going into the last three events of the year.

Perez will look to make amends at home in Mexico and could try an alternative strategy to gain positions. He used his smooth style to preserve his tyres last year and was on to make a one stop strategy work, only to be thwarted by the late safety car. He finished in eighth, just behind his team mate.

The Mexican crowd love Perez and the stadium would erupt if he could get on the podium, which may just be possible if luck and strategy fall into place for him.

Jolyon Palmer has started showing signs of frustration in the car that came to a head on the team radio in Austin as his chances of retaining the seat for 2017 are becoming increasingly thin.

The team last year (as Lotus) came in tenth and eleventh place, but they had the benefit Mercedes power. The Renault engine starved of air is likely to hamper their progress and limit their chances of points.

Both drivers will contest this weekend in high spirits after a good weekend in the USA. Carlos Sainz Jnr equalled his best ever finish in sixth, while Daniil Kvyat put speculation about his future to bed as he re-signed with Toro Rosso for 2017.

Kvyat was on form in 2015 and bested Ricciardo in Mexico. He just missed out on the podium behind Bottas, as his straight-line speed deficit was too great to keep the Williams behind once the safety car had bunched up the field.

By contrast this was not a strong circuit for Sainz last year, as he was eliminated in Q2 and finished 13th, while team mate Verstappen qualified 8th and took points for 9th place.

Sauber are still searching for the single point that would promote them ahead of Manor in the standings and gain them the massive funding bonus that comes with it.

It looked promising for them at one stage at COTA, where Marcus Ericsson hovered around the fringes of the points before dropping back to 14th at the flag.

Sauber significantly out-performed Manor here last year, but the difference between the teams has been much less this season and a closer battle is expected.

Last year’s Mexican Grand Prix does not conjure up good memories for McLaren. Fernando Alonso knew before the start of the race that he would not be able to compete as an MGU-H problem was discovered on Saturday night. He only completed one slow lap before pulling into the pits to retire.

Jenson Button who sat out qualifying due to power unit problems, fared poorly in the race. He lamented a general lack of power, which he blamed on the altitude.

The Honda power unit has made big strides this year and could be competitive as their energy deployment is regarded as one of the best, a factor that is not affected by the thin air.

Toto Wolff has said that the future of both Pascal Wehrlein and Esteban Ocon has yet to be decided and the Mercedes hierarchy will continue to watch their progress with great interest. It is possible both could remain at Manor next year, but possible moves to the empty the seats available at Force India, Williams and Renault are being discussed behind the scenes.

Mexico is new territory for both drivers and will hope to put their Mercedes power unit to good use and keep Sauber behind them.

Romain Grosjean gave Haas their dream result with a point on the glorious homecoming for the American team. The point also marked his 100th start in Formula One.

Esteban Gutierrez was not so lucky and retired with yet another brake failure, further highlighting the difficulties the new team are having to overcome the problem.

The Mexican will hope that his fortune reverses and will take strength from the huge crowd that will be supporting him this weekend to gain those elusive first points that he so desperately needs.

Are you going to the Mexican Grand Prix?

If you’re heading to Mexico for this weekend’s race, we want to hear from you.

Who do you think will be the team to beat in the Mexican Grand Prix? Have your say below.