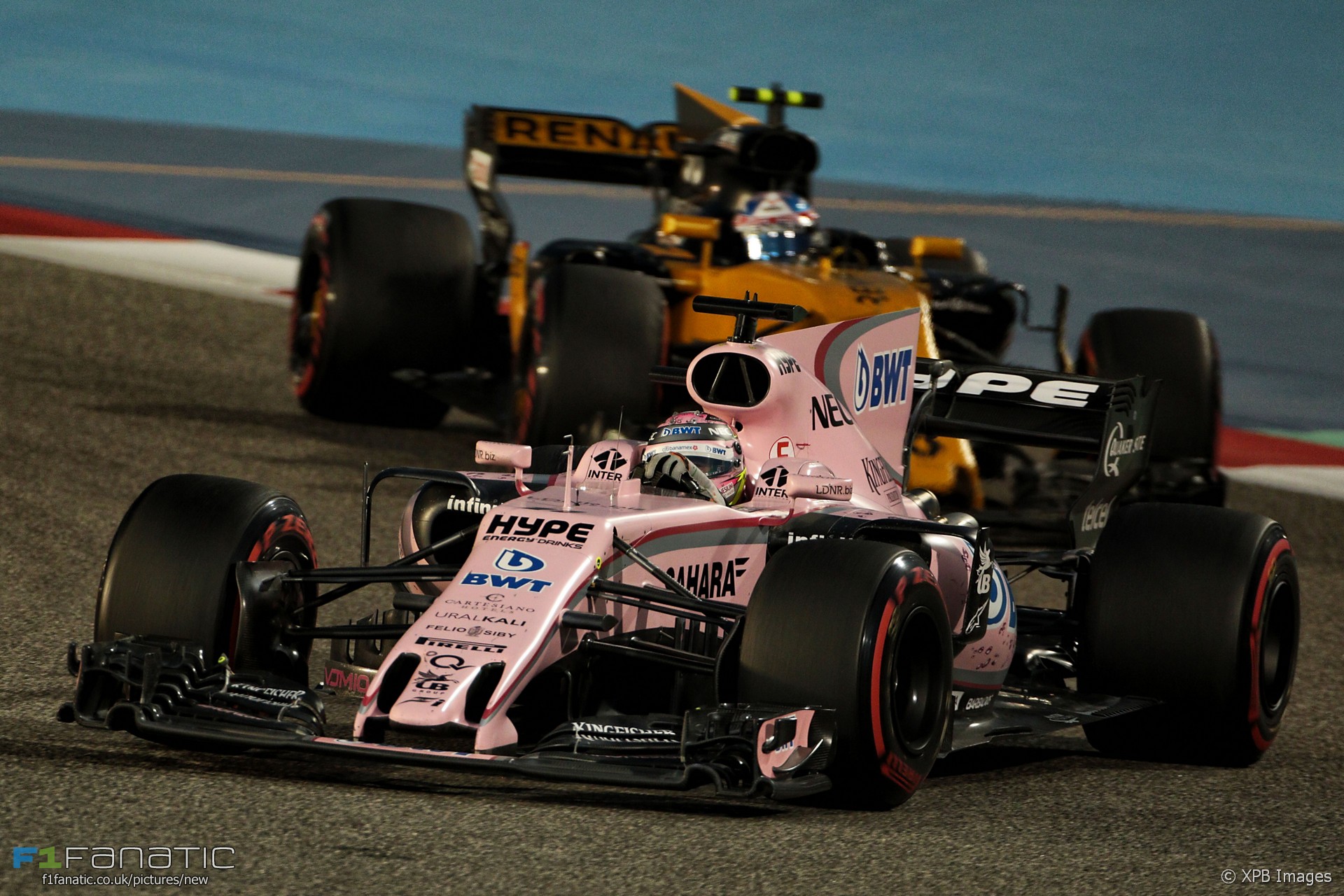 Having had his qualifying lap ruined by Carlos Sainz Jnr’s stoppage on Saturday, the Toro Rosso driver inadvertently helped Perez on Sunday when he crashed into Lance Stroll. The appearance of the Safety Car could hardly have worked out better for the Force India driver.

Perez had already made a rapid start, gaining five places, and passed Jolyon Palmer for good measure. Force India coolly put him on another set of super-softs when they brought him in during the Safety Car period, locking him into a two-stop strategy but giving him the grip to go on the attack.

This he did, passing Pascal Wehrlein and Nico Hulkenberg. That put Perez on course for an excellent seventh place.

Third on the grid was as good as it was going to get for Ferrari as Mercedes had a little more pace in hand on Saturday. Still he had his team mate well handled as usual.

Crucially he got ahead of Lewis Hamilton at the start, then piled the pressure on Valtteri Bottas. Whether he could have made quick enough progress through traffic for his early pit stop to pay off is an intriguing question, because unlike in China a Safety Car appearance played into his hands this time.

He rebuffed Bottas at the restart, then ground out the quick laps he needed to win the race.

Pipping Felipe Massa for seventh on the grid earned Hulkenberg ‘best of the rest’ honours in qualifying. The Renault’s race pace is weaker, however, and it was to be expected he would fall behind the Williams in the race.

Being on soft tyres after the restart meant he wasn’t able to contain Perez either, but the huge gap back to his team mate indicated Hulkenberg had got the maximum from his machinery.

A lot of people suspected the worst when Wehrlein sat out China, especially after Antonio Giovinazzi’s impressive showing in Melbourne. Then Giovinazzi binned the car twice in two days in Shanghai and Wehrlein came back.

He did a first-rate job. In qualifying he beat Marcus Ericsson to the tune of more than half a second, and in the race he patiently brought the car home on a one-stop strategy which nearly brought him a point. Keeping Esteban Ocon behind was probably too much to expect, however.

Yes, he made it into Q3 for the first time. But look at the gaps to his quicker team mate: over a second on the grid and 36 seconds after 31 laps of green-flag running in the race.

Palmer slipped behind Daniil Kvyat and Fernando Alonso shortly before his final pit stop. That left him the last driver still running at the flag.

Sainz’s weekend had already been compromised by two failures. The first occurred in second practice – the only session held in representative track conditions prior to qualifying. And the second came as he was about to grab a place in Q2.

But his clash with Stroll during the race was undoubtedly careless and spoiled what could have been another run into the points.

A fine debut pole position for Valtteri Bottas didn’t lead to a win due to a combination of wrong tyre pressures in the first stint, a lack of rear grip later in the race and slow Mercedes pit stops. The latter also compromised Hamilton’s race, though he made life difficult for himself too with a needless penalty.

It might have been a good race for Max Verstappen had a brake failure not put him out. Daniel Ricciardo out-qualified him but lacked pace on the soft tyre in the race.

Kimi Raikkonen blamed a poor start for his result, though the slow pace at the front of the field meant he actually lost little time in the opening laps. He was hauling Bottas in at the end.

The only Williams finisher was Felipe Massa, again, though Stroll was blameless for his retirement this time. Daniil Kvyat ended the race point-less after a poor start.

Ocon didn’t catch the same break behind the Safety Car as his team mate, then got stuck behind Romain Grosjean, who was unable to pass Hulkenberg. Grosjean took his first points of the season while Kevin Magnussen started last and retired.

Marcus Ericsson also failed to see the chequered flag. That was at least better than Stoffel Vandoorne, who didn’t even get to see the starting lights. Fernando Alonso made sure no one was in any doubt about the nature of McLaren’s problems.

Who was the best driver of the Bahrain Grand Prix weekend?

Choose the driver who impressed you the most in Bahrain: