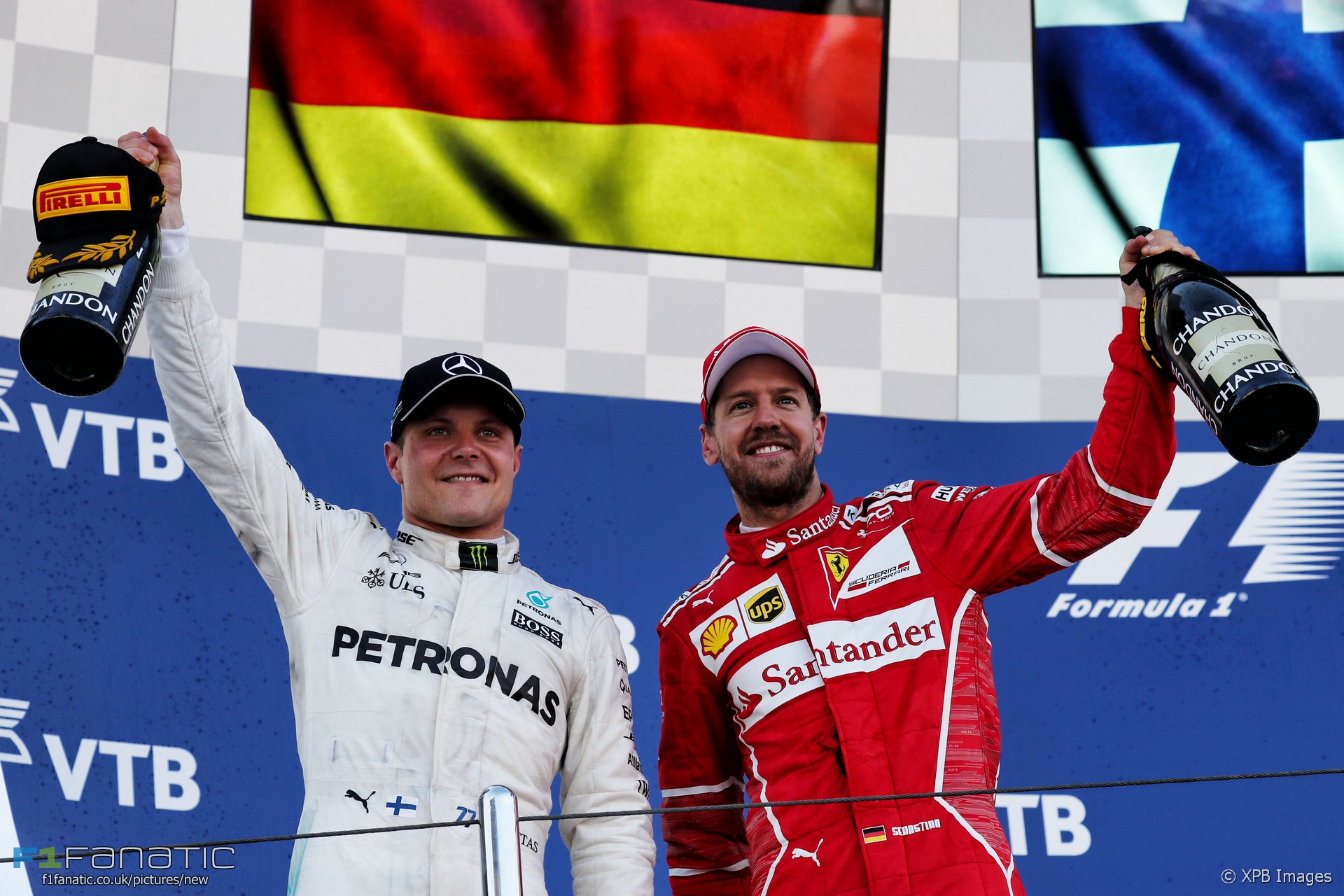 This was a coming-of-age performance by Bottas. He was expected to shine at Sochi, a track he has always gone well at. But by conclusively beating his thrice-champion and winning from off the front row he comfortably exceeded those expectations.

Bottas was faster than Lewis Hamilton in every session during the weekend and out-qualified his team mate by almost half a second. He executed his start perfectly and seized the opportunity to pass both Ferraris.

That allowed him to unleash the strong pace he had on the ultra-soft tyres, giving him enough of a margin to stay ahead of Sebastian Vettel once the pit stops were done with.

The final laps were tense as Vettel applied serious pressure. Ferrari told their man Bottas would crack, but he never put a wheel wrong. While Vettel was tentative in dealing with the lapped Felipe Massa, Bottas wasted no time in picking off Pascal Wehrlein just six corners from home.

This was a top-drawer performance, and if he’s got a few more up his sleeve he will definitely be a title contender this year.

Vettel may have started from pole position and failed to win, but this was still an excellent drive from him too. He has good cause to feel it was only a stiff headwind which cost him a third victory.

Having been unable to keep Bottas behind, Vetel made a decent fist of closing on the lead Mercedes in the second half of the race. His pace on the super-softs was excellent, and he nearly got within striking distance at the end. Perhaps he could have been more aggressive with Massa, but Vettel knows titles aren’t won by risky moves in traffic on days when your closest rival is already behind you. He may have lost this battle, but he’s winning the war.

Having failed to make it beyond lap one on his last two visits to Sochi, Nico Hulkenberg could be forgiven for being a little circumspect at the start this time, and he slipped back two places.

He was able to regain them over the course of the race, suggesting Renault have been able to improve their long run pace, even at a track where they expected to have difficulties. Hulkenberg ran a long first stint but just ran out of time to launch an attack on Esteban Ocon for seventh.

Have a look at the team radio highlights from practice and qualifying to see just how bad a time Romain Grosjean had trying to sort out his Haas. The team arrived at Sochi with a plan to test Carbone Industrie brakes but ditched them on Friday evening. However once back on Brembos Grosjean still wasn’t happy.

He might have got himself beyond Q1 had it not been for another unfortunately-timed yellow flag. That left him at the back of the pack, and an optimistic first lap move on Jolyon Palmer finished off a miserable weekend.

Palmer’s Russian Grand Prix didn’t go any better, though to begin with it was not for reasons of his own doing. A chassis change and power unit replacement left him short of practice time.

He made matters worse by crashing in qualifying, however. That left him well out of position near the rear of the field where he tangled with Grosjean at the start.

Stroll took the curious decision not to do a qualifying simulation lap on Friday. That gave him more sets of the softer tyres to experiment with on Saturday, but even so he failed to get the most out of them. He ended up almost a second off Massa – a driver whose qualifying record last year was weak.

In the race Stroll got off the line well but wasted his start with a spin. To his credit from there he drove a better race and posted his first finish, though his position relative to Massa was flattered by his team mate’s two punctures.

Hamilton never got a handle on his Mercedes though it seems some technical problem contributed to his race result. Raikkonen enjoyed a much better weekend, but was frustrated to miss out on his first pole position for nine years by such a slender margin.

Max Verstappen made a feisty start but then had no one to race with: his team mate retired early on and Massa dropped back due to punctured tyres. The Force India pair quietly accumulated more points, Sergio Perez leading the way and Esteban Ocon putting in a solid drive.

Tenth was probably the best Carlos Sainz Jnr could hope for at this track while Danil Kvyat was unimpressed with the timing of his pit stop. Kevin Magnussen and Stoffel Vandoorne picked up needless penalties, though the latter at least got to start this time, which was more than could be said for his team mate.

The Sauber drivers pitted after the first lap to get rid of their super-soft tyres which would have been a sound strategy had they found more performance or durability from the ultra-softs.

Who was the best driver in Russia?

Which driver impressed you the most during the Russian Grand Prix weekend? Cast your vote here: