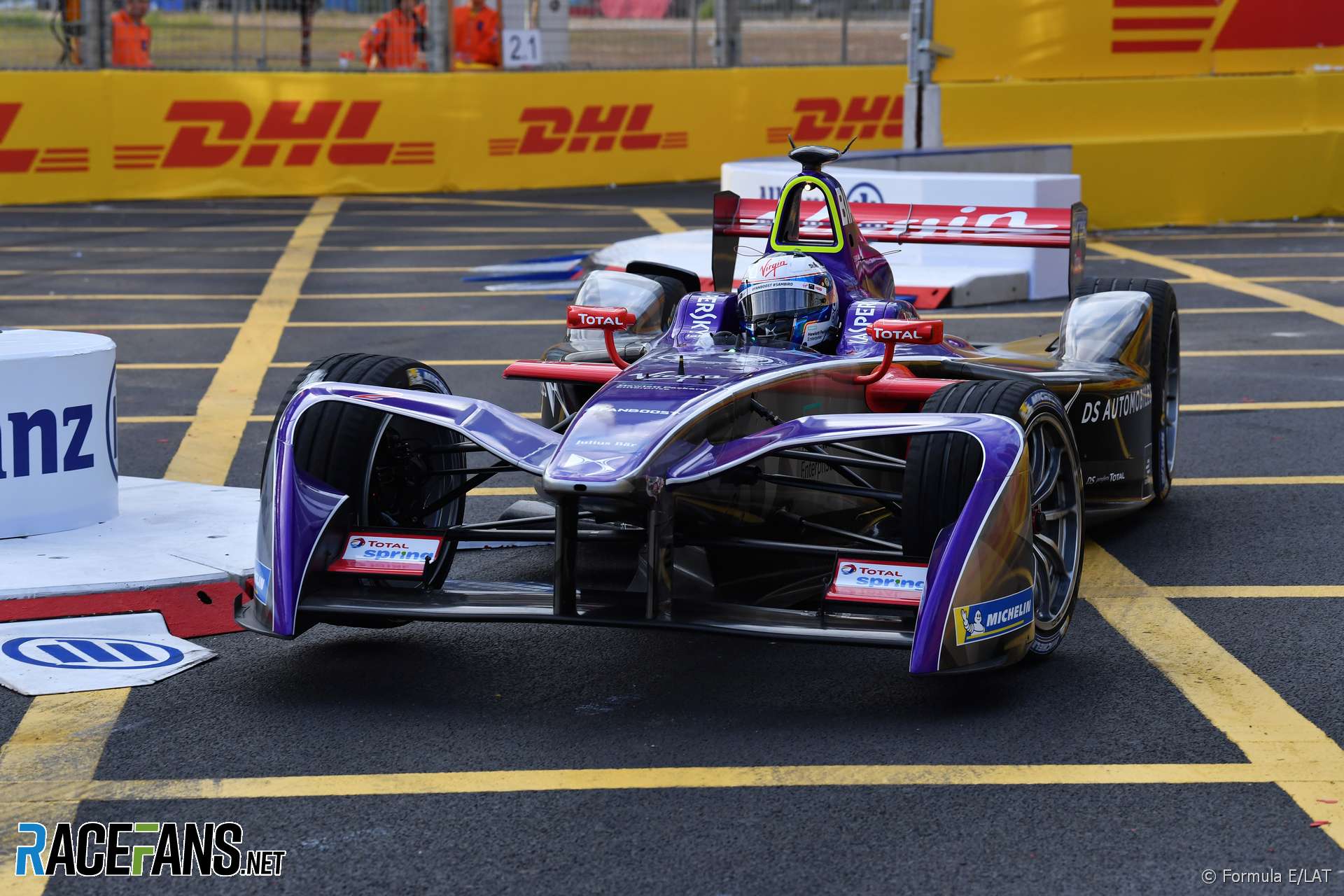 Sam Bird emerged as the new threat to Jean-Eric Vergne for the Formula E championship after winning the championship’s first race in Rome, while pole sitter Felix Rosenqvist hit trouble.

After a dramatic qualifying that saw two cars out of contention in the pit lane, the Rome Eprix continued to deliver action with two cars damaged at turn one and the meatball flag out on lap two. Decided on the kerbs and in energy management, the Rome Eprix was a fierce battle to the end.

Sam Bird took victory after a 33-lap battle that saw multiple-time Le Mans winner Andre Lotterer fighting with Mitch Evans, the series’ youngest driver, right until the final lap. Having assumed the maximum he could achieve was second, surrounded by faster cars, Bird won with an error-free drive as the track took prisoners all around him for mistakes.

Formula E races aggressively wheel-to-wheel and there was no shortage of that, with repeated clashes between cars. But it’s also fought on the art of regeneration, with drivers defending and attacking while doing high speed mental maths and fairly literally fighting the power.

Alex Lynn’s DS Virgin was nudged into mounting Jean-Eric Vergne’s Techeetah at the first turn of the race, continuing a horrible streak of luck for the driver in Rome, after crashes in both free practice sessions. DS Virgin team boss Alex Tai had described Lynn as ‘under pressure,’ feeling the need to live up to teammate Sam Bird’s performance and clearly frustrated, audibly shouting in annoyance after his second collision.

Joining the audible shouting, Jose-Maria Lopez started from the back of the grid after Antonio Felix da Costa was released directly into him while exiting the pit lane for their qualifying group, to his visible displeasure. Da Costa was penalised 10 grid places, which from the back of the grid himself translated into a ten-second time penalty during his pit stop and a clearly un-placated Lopez tangled with Edoardo Mortara early in the race, battling with the Venturi driver.

Oliver Turvey, who recently achieved his first podium in Formula E at the Mexico Eprix, made some early moves that saw him hopscotch Lucas di Grassi and Sebastien Buemi into fifth.

Championship leader Vergne had warned as he took victory in Punta del Este that there was still a long way to go before the title was decided, with Rosenqvist 30 points behind him. Taking three pints for pole chipped at that gap and Vergne needed to put in a good result in Rome to lead comfortably into his home race in Paris. However, the first lap collision with Lynn seemed to damage his first car, a rear wheel at an angle that left him unable to improve position.

After 14 laps, Mitch Evans and Andre Lotterer, battling for third place, had 6% more usable energy than the cars immediately ahead and behind them – suggesting a strategy to stay out a lap longer than the others, with pit stops looming. Similarly, Lucas di Grassi and Jean-Eric Vergne, down in eighth and ninth, seemed to be storing energy to refuse to cede place. Both tight battles, the question of who dared continue looked set to decide a few battles.

Penalised Da Costa pitted early, taking his 10 second second penalty but on the final lap before pitting Mortara, Filippi, Turvey and Heidfeld crunched together in a recreation of the train that reflagged the first Hong Kong race this season.

Race leaders Rosenqvist and Bird pitted simultaneously, with the Swede comfortably out ahead, with Evans maintaining P3, coming out in front of Lotterer despite a slightly scrappy pit stop.

Alex Lynn stopped on track in his second car, once more colliding with the TecPro and bringing out full course yellow flags, which should have provided an energy boon to the race leaders. However, moments later it was Rosenqvist’s turn for disaster to strike with a kerb taking him out of the race.

Initially unclear what the cause was, Felix officially suffered suspension failure with the cause assumed to be a kerb collision. Formula E cars kerb-ride a lot, to negotiate the tight street circuits but a heavy blow to the back can cause the delicate, regeneration-necessary rear suspension to break apart, making the car undriveable.

Bird inherited the lead, holding on during a fierce battle with now-second-place Mitch Evans, himself defending from Lucas di Grassi who in turn was under attack from Andre Lotterer.

It looked set to be Evans’ – and Jaguar’s – first real Formula E podium, after taking one post-race following Daniel Abt’s disqualification in Hong Kong. Holding on until the final lap, as Evans crossed the start line he had only 5% energy remaining – to Lotterer’s 7%.

Battling hard, he’d been unable to regenerate or lift enough and with 6% needed for a lap, Evans was left helpless to slip back the order, handing the podium to Lotterer. With the gap too big for a last-lap dash, Di Grassi and Bird were safe and Evans coaxed his car home for a much smaller points haul in eighth.

Di Grassi came in second but remains under investigation for an unsafe pit stop release, with Formula E podiums wont to change late and night after final decisions.

A blessing for the championship leader, Vergne ended up fifth with his closest rival eliminated and superseded by Bird. As we head across Europe, the title remains tantalisingly close for any of the top three drivers and unpredictability the only guarantee.