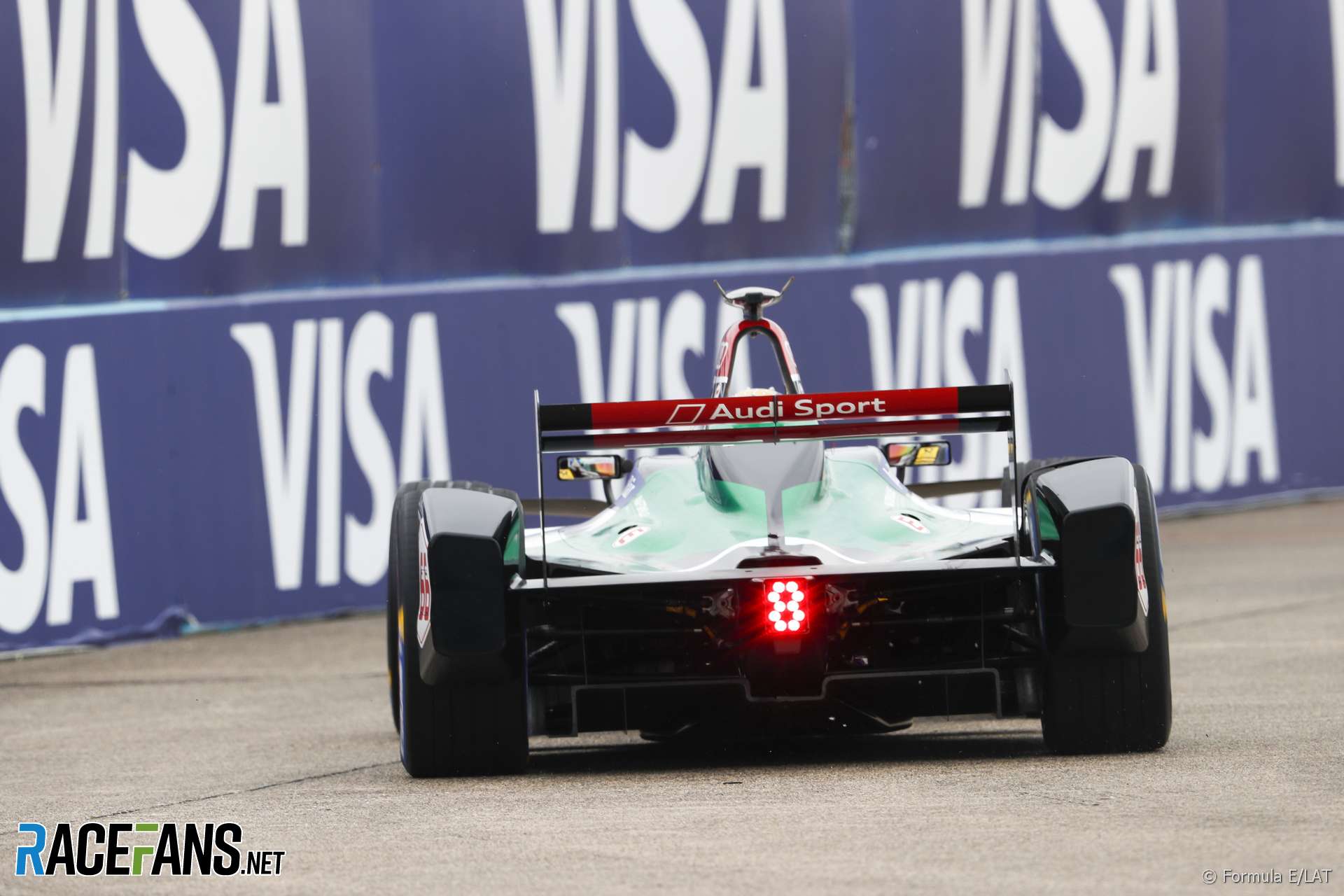 Berlin qualifying saw Daniel Abt take a dominant pole position – two tenths clear of his team mate’s best time. But the home racer faced a nervous wait to learn if he would keep it following a regulatory infringement.

Traditionally, Group One of a Formula E qualifying session is the ‘group of death’ – with times getting considerably faster with every group. However, the Tempelhof circuit is prone to throwing up unexpected results – racing on runway concrete with no give, tyres have short lives and as heat is worked into the surface the operating window becomes extremely narrow, drivers wrestling cars with little to no grip if they get it wrong.

Group One saw the back end of the championship top ten take to the track. Nelson Piquet Jnr Daniel Abt, Mitch Evans, Andre Lotterer and Oliver Turvey had to face the steadily warming concrete, with Lotterer putting in a 1’10.598 lap as the first time.

Times in free practice sessions were reaching the mid 1’09 mark, so it seemed as though the usual group one issues were playing out. However, Turvey and Abt put in much faster laps, both slipping into better times with Abt topping the session at 1’09.774.

Group three was the back of the championship – three struggling drivers in Nico Prost, Luca Filippi and Jerome D’Ambrosio, recently re-joining Stephane Sarrazin (who replaced Tom Blomqvist at Andretti) and stand-in Tom Dillman, covering for Edoardo Mortara due to a DTM clash.

Although standout performances were relatively unlikely, D’Ambrosio – who won the race here in Season 1 following Lucas di Grassi’s disqualification and had looked fast in practice – put in a 1’09.938 and took himself directly to Super Pole contention.

Group four was the top five racers in the points standings, Di Grassi, Sebastien Buemi, Felix Rosenqvist, Sam Bird and Jean-Eric Vergne. The latter, generally on superb qualifying form this season, topped the times with a 1’09.765. However, di Grassi ultimately put in the fastest group time with a blistering 1’09.620 – on pace with Maro Engel’s fastest race lap from last season (1’09.519) despite a longer circuit.

Super Pole was filled out as Di Grassi, Vergne, Abt, D’Ambrosio and Turvey. D’Ambrosio was unable to reproduce his group pace with a disappointing 1’10.054, although the third row of the grid represents his most successful result this season.

However, a decision remained open on Abt’s qualifying lap following a possible infringement of restrictions on 200kW usage, which can only begin in the last sector of a warm-up lap.

Turvey found extra time for a very competitive 1’09.775, only to be beaten by Abt who shaved two tenths off his teammate’s best time at 1’09.472. Vergne was unable to match the German’s pace and Di Grassi made a substantial error, putting him below even D’Ambrosio.

With the enquiry still open, it looked as though Abt might have put in the qualifying of his life only to lose a home pole. However, some time after the session it was confirmed he would keep his second career pole, his first since Long Beach in 2015.