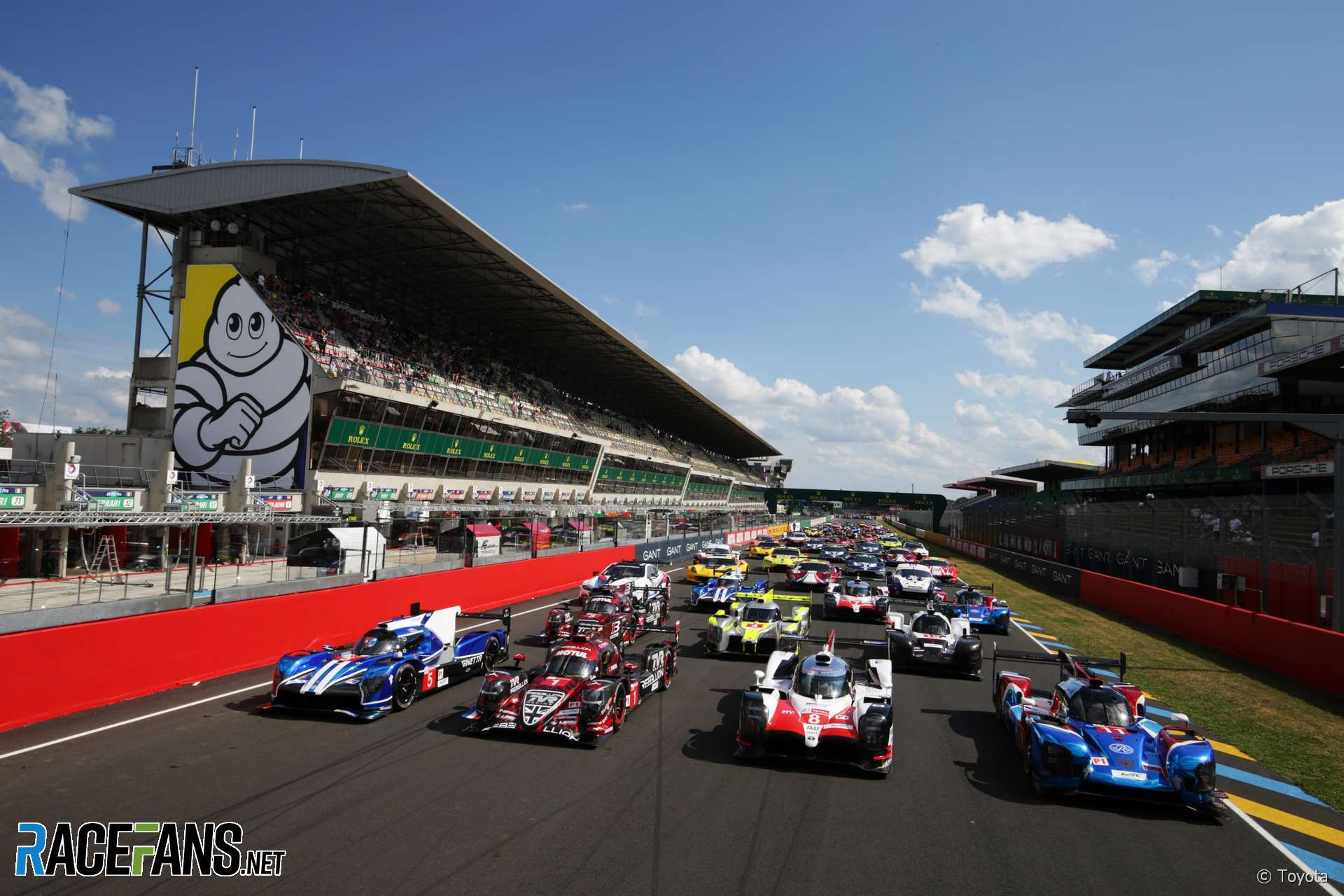 Toyota is the only manufacturer left in the LMP1 category at the Le Mans 24 Hours. Surely the Japanese manufacturer is set for an unopposed cruise to a long-overdue victory?

And with that, will Fernando Alonso move a step closer to achieving his goal of winning motorsport’s ‘triple crown’?

To avoid the unattractive appearance of the race being dominated by the only two LMP1-hybrids in the field, the sub-class has been merged with the non-hybrid LMP1 cars, creating a single LMP1. ‘Equivalence of technology’ regulations will allow for the performance of the cars to similar levels.

But don’t be fooled: the race organisers have made it clear ‘equivalence’ does not mean allowing the expensive hybrids to be beaten by cheaper, conventionally-engined machinery on outright pace. Nonetheless, as recent Le Mans races have shown, Le Mans is about more than just speed.

How quick are Toyota’s LMP1 rivals?

Alonso won first time out with team mates Sebastien Buemi and Kazuki Nakajima at Spa. But to the surprise of some he made remarks during the weekend about the team’s non-manufacturer LMP1 opponents being “too fast”.

“I completely understand Alonso’s point of view,” said Webb in an exclusive interview for RaceFans. “I genuinely believe that’s not him trying to make it sound like it’s closer than it is. I believe he actually thought it was.”

Much of the pre-season testing for the World Endurance Championship was conducted behind closed doors and Webb believes it gave Toyota cause for concern about the performance of the revamped customer LMP1 cars.

“In pre-season testing there was a couple of occasions where we privateers were quicker than Toyota. Obviously that was never released because it was private testing. But there were two times off the top of my head I can remember where one of the other privateer cars were not only quicker than them in lap time but about 40kph quicker in a straight line.”

Then came the first race of the season at Spa which produced a crushing one-two for Toyota. The third-placed Rebellion car was two laps behind after six hours of racing.

“The fact that they let privateers be quicker in testing was a surprise,” said Webb. “But I think that just made it nothing but more exciting for qualifying.

“And then in the race it just showed. If they’re going to win by a lap in a six-hour race then even if you’re a bad mathematician you can guess it’s going to be around four laps by Le Mans at easiest.”

Will Toyota’s competition be closer at Le Mans?

Spa-Francorchamps may be one of the quickest circuits on the F1 calendar but the Circuit de la Sarthe is a completely different beast: longer and far faster. That means Toyota won’t be as far as ahead of its rivals, Webb reckons.

“At Le Mans it will be closer because we have longer straights. The fact of the matter is we [customer teams] are quicker [in a straight line]. SMP have recorded a speed of 360kph which is 25kph quicker than a Formula One car. It is a slippery car.”

The merging of the LMP1 sub-classes has a subtle but important consequence, which means Toyota will have a harder a time in traffic.

“Because there’s no hybrid and privateer category now that also very much changes the way blue flags work,” Webb explains. Even if Toyota are a lap or more ahead, the LMP1 competition won’t have to wave them by.

“If they overtake us out of the corner and we overtake them at the end of the straight we don’t have to leave way to them because we’re ‘getting in their way’.”

But it’s important not to exaggerate the likely competition for Toyota. Their pace advantage should allow them to avoid the kind of reliability problems which wrecked their victory hopes 12 months ago.

“Everything is… easy is the wrong word because those guys push their hearts out. But they don’t have a Porsche in their wing mirrors the whole time so they can drive at a comfortable pace so the likelihood of something going wrong is less.”

So the Toyota is likely to be quick and its reliability shouldn’t be a concern. Are there any other ways they could lose a race they must win?

Keeping a lid on the intra-team rivalry between the Alonso/Buemi/Nakajima number eight car which won at Spa, and the Mike Conway/Kamui Kobayashi/Jose Maria Lopez number seven machine which was clearly quicker, will be a challenge. The latter would surely have walked to victory in the first race had they not been penalised in qualifying and then controversially ordered to follow the lead car home at the end of the race.

Webb admits that while Toyota’s tactics were “not against the rules” it may not have helped team harmony. “You’d be very frustrated if you were one of the other drivers.”

Le Mans may be the most important race but there’s a championship to be won and this round counts for double points. And the number seven crew will be in no doubt which was the quicker car, having started over a lap behind and finished on the tail of the other car.

And while Toyota have previously fielded three cars at Le Mans, this year their entry is down to just two, making them that bit more vulnerable.

Webb expects his ByKolles-run ENSO CLM P1/01 will be in the middle of the LMP1 fight. He identified two rival teams as the ones most likely to challenge Toyota, both of which have two cars at their disposal.

“The Rebellion is an ORECA effectively. If you take an LMP2 car and adapt [it to] the LMP1 rules, i.e. take 100 kilograms out of the car and give it 100 horsepower, that’s basically where it is. That makes the car so much quicker.

“Every single part of our car is completely custom-made. They are an ORECA which is a huge company – or a Dallara for SMP – these companies know exactly what they’re doing. They have wind tunnels which we don’t, so off the back their car was very quick.”

While ByKolles have struggled with reliability in recent seasons the switch to NISMO power has been a substantial step forward and the car ran much better at Spa. Webb hopes this new-found reliability will be a strength.

“The Rebellion doesn’t have turbos, therefore the reliability of something singing at 11,000rpm for 24 hours is going to be a concern for them,” he said. “It’s harder to run.”

Alonso will inevitably be a focus of attention, as when he raced at Indianapolis last year. But several other big-name drivers have joined the WEC’s elite for this year’s race.

Among them is 2009 Formula 1 world champion Jenson Button, making his World Endurance Championship debut in between his Japanese Super GT commitments. He joins fellow ex-F1 racer and Vitaly Petrov in one of SMP’s LMP1 cars with former IndyCar driver Mikhail Aleshin.

SMP’s BR Engineering machine has been quick but a pair of alarming crashes at Spa-Francorchamps – including Matevos Isaakyan’s terrifying flip at Raidillon – have forced changes to the car which appear to have come with a drag penalty.

Alonso cut his endurance racing teeth in an LMP2 car run by McLaren boss Zak Brown’s United Autosports team at Daytona at the beginning of the year. At Le Mans one of those seats is occupied by his former F1 rival Juan Pablo Montoya. Paul di Resta is in the team’s other car.

The human element of competing in a 24-hour race is something the likes of Button will be experiencing for the first time. Surprisingly, Webb admits he has never managed to sleep during any of the 24-hour races he has competed in.

“Some people are really good at it,” he said. “I remember in Alpine when we came third Nelson [Panciatici] my team mate could just sleep in the garage, all the time.

“I tend to get zero. You’ll get out of the car, see your engineer for half an hour, eat for half an hour, see the masseuse for half an hour and then you’ll probably get about an hour to yourself before you have to be changed and back in the garage a stint before you’re in. All in all it’s like four hours out of the car and an hour to yourself. Of that hour, you’ve got headphones on, timing screens in the background… I’ve never in any 24 hours race, whether it’s Daytona, Dubai or wherever, I don’t think I’ve ever fallen asleep.”

Making matters worse, the drivers tend to get little rest in the build-up either.

“People forget 24 Hours of Le Mans is not 24 hours for us because we get up at 6am because free practice is at 8am. Thanks, whoever invented that! Stupidest decision in the world.

“And the day before that the drivers’ parade, which is obviously really fun to do and great for the crowds, goes on until about 8pm, 9pm. In the boiling heat, of which a couple of people went to hospital last year because of heat exhaustion. It’s more like a 48-hour event, of which you race for 24 of it. So you’re kind of knackered when you start, you’re tired at the start line.”

23 comments on “The race Toyota must not fail to win”