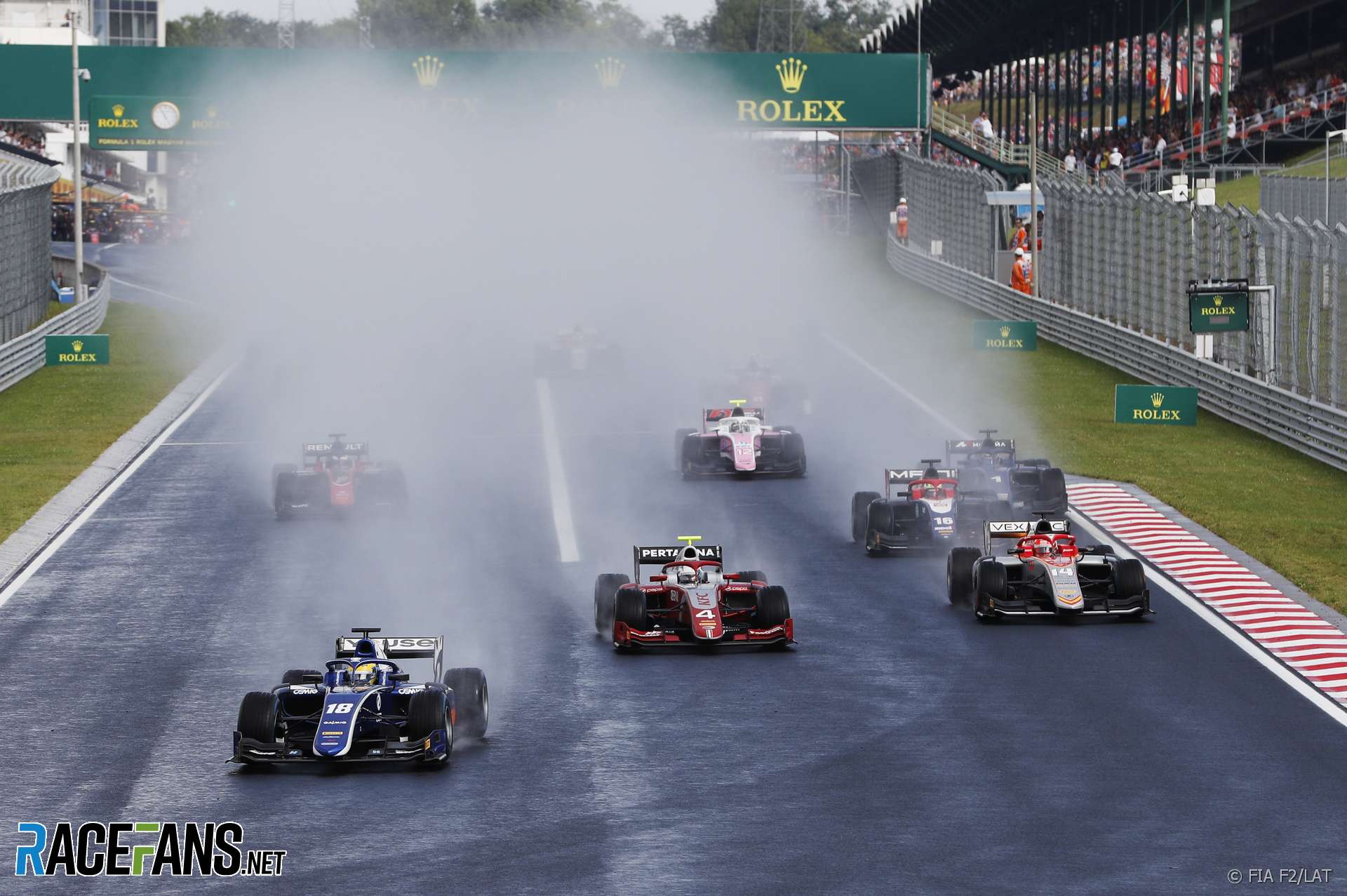 Nyck de Vries triumphed over Lando Norris in a fierce battle around a slippery Hungaroring in the Formula Two feature race.

Carlin’s dominance in the wet – Norris and team mate Sergio Sette Camara ran one-two in the first half of the race – was ultimately outstripped by Prema’s speed as the track dried.

The Hungaroring marks two-thirds of the way through the F2 calendar, with 340 of the maximum 576 points available decided before the start of the feature race.

George Russell’s three-round streak of pole positions was broken by Sette Camara claiming the fastest lap in qualifying yesterday. That left the standing order unchanged, with Russell still 37 points ahead of Norris and Alexander Albon in third place.

The start was crucial – and under tremendous pressure – for this race. After two rounds of rolling starts under Safety Car due to clutch problems on the new F2 cars, plus 100km testing for each team, Aitken predicted the start would be “quite varied across the field” using the new system.

Add to that a very wet track following thunderstorms during Formula One qualifying and the fact that F2 have no intermediate tyres – just slicks and wets – and the start looked set for drama.

It started well before lights out, with Russell absent from the grid due to problems on his ART carThat dropped him from the second row to the pit lane.

Three formation laps behind the safety car were enough for the race director to call a standing start. Sette Camara and De Vries got good starts, while Aitken dropped back to fourth behind Luca Ghiotto.

Nirei Fukuzumi also got away quickly, moving from eleventh to seventh in sector one. Gunther, Boschung and Deletraz were less fortunate – all three ended up straight into the pits with damaged cars and forty seconds off from Alessio Lorandi at the back of the main pack.

ART’s day got worse as Aitken was passed by Norris on lap five, on a charge that saw him battle Ghiotto fiercely for third, then take De Vries for second. Lapping a second faster than any other driver in the field – other than Russell, down in nineteenth from his start – Norris cut the gap to Sette Camara to less than one and a half seconds by lap nine.

The next lap a gutsy move around turn five saw the Brazilian unable to defend and Norris, lapping three seconds faster than Sette Camara, pull away quickly.

Even with a wet start, there’s a mandatory pit stop in an F2 feature race and with no intermediate option available or rain on the horizon strategy became crucial. Dry lines were emerging by lap 11, making the full wet tyres struggle – this season has seen F1 drivers extremely uncomfortable with wet or intermediate tyres in changing conditions, even with much more downforce.

Lap 13 saw Russell, who despite fast times hadn’t moved further forward than the back markers, take another blow as he came into the pits to retire. In conversation with his engineer, he said that the car was not possible to stop and too dangerous to drive, following earlier mechanical issues.

By lap 14, a battle for second had emerged between De Vries and Antonio Fuoco, who had moved up the field from twelfth in Norris’ wake. With standing water still visible in the ridges of kerbs, the window nonetheless opened to see who’d blink first for slicks and chance a very restricted line or endure degrading, overheating wets for longer.

Tadasuke Makino was the first driver into the pits, a rooster-tail spray coming off the back of his Russian Time as he exited on slicks. Immediate improvements in time, from a race ruined in free practice after he’d gone into barriers.

Norris pitted from the lead on lap 17, emerging in third behind only wet-treading Fuoco and Latifi. Neither presented much obstacle to Norris, back on the form he showed in the first few rounds of this season where he’d seemed almost to be in a different series from those surrounding him.

On lap 18, it became clear exactly how limited the dry line was when Fuoco finally pitted, nearly colliding with Sette Camara on the exit and being forced off-line. The rest of his lap took on substantial supermarket trolley qualities, barely holding the car as it snapped round on even on the straights. Gelael and Markelov went for dramatic excursions and the difference between sectors – one and three relatively damp compared to the middle – was dramatically flagged.

Difficulties with grip took none of the fight out of on-track battles, a five-way fight for fourth between Fuoco, Aitken, Albon, Merhi and Fukuzumi continuing for several laps.

Meanwhile De Vries, restored to second following pit stops, started seriously eating into the lead Norris had drawn out again. Gaining half a second on him per lap, De Vries had already pulled nine seconds ahead of Sette Camara in third and was free to pursue the Carlin.

Norris’ dominance in the wet period of the race looked extremely fragile when on lap 25 De Vries’ teammate, Sean Gelael, started setting fastest sectors. Not often rated as reliable for speed, Gelael showed how far the Prema team had managed to come back with a fastest lap – and by lap 28, De Vries took Norris on his first overtaking attempt.

With no DRS all race, drivers were dealing only with wheel-to-wheel fighting entirely decided by who dared to push the limits of the dry lines. Alexander Albon made a bold attempt on Aitken for fifth, only to go off-track onto sopping wet runoff, aquaplaning back onto the track only to collide with and be overtaken by Merhi.

By lap 29, De Vries had extended a colossal seven second lead over Norris – whose tyres were visibly degrading, sliding backwards into the clutches of teammate Sette Camara, who he’d had a near-twenty-second lead on a few laps previously.

Incredibly, only Russell had retired still by lap 31 until Nicolas Latifi’s DAMS stopped on track to bring out a Virtual Safety Car, neutralising the final laps. It looked like lucky escape for Norris, whose second place looked extremely threatened under racing conditions.

However, a quick retrieval saw him struggling again while tenth-placed Markelov menaced Fukuzumi for ninth, both drivers desperate to pass Ghiotto for reverse-grid pole tomorrow. Markelov got it done on the penultimate lap, speeding on to try to take Merhi.

Fuoco entered the battle between the Carlins for second, taking third from Sette Camara with a move up the inside as the Brazilian made an attempt on his teammate.

Norris looked seriously threatened by Fuoco – until just after De Vries passed the chequered flag and Sette Camara collided with the Italian, spinning him on-track. Sette Camara was issued a 10-second penalty on the cool-down lap, giving the final podium place back to Fuoco and leaving him with barely a points finish snatched from pole.

De Vries moves to points and in the standings while Norris closes the gap to Russell to just 19 points on 151. Ralph Boschung takes the points for fastest lap, putting in a 1’32.473 on the penultimate go round.

De Vries, Norris and Fuoco took the podium, with Aitken, Albon and Ghiotto ahead of penalised Sette Camara, followed by Markelov in eight for reverse-grid pole. Honda juniors Makino and Fukuzumi completed the top ten.