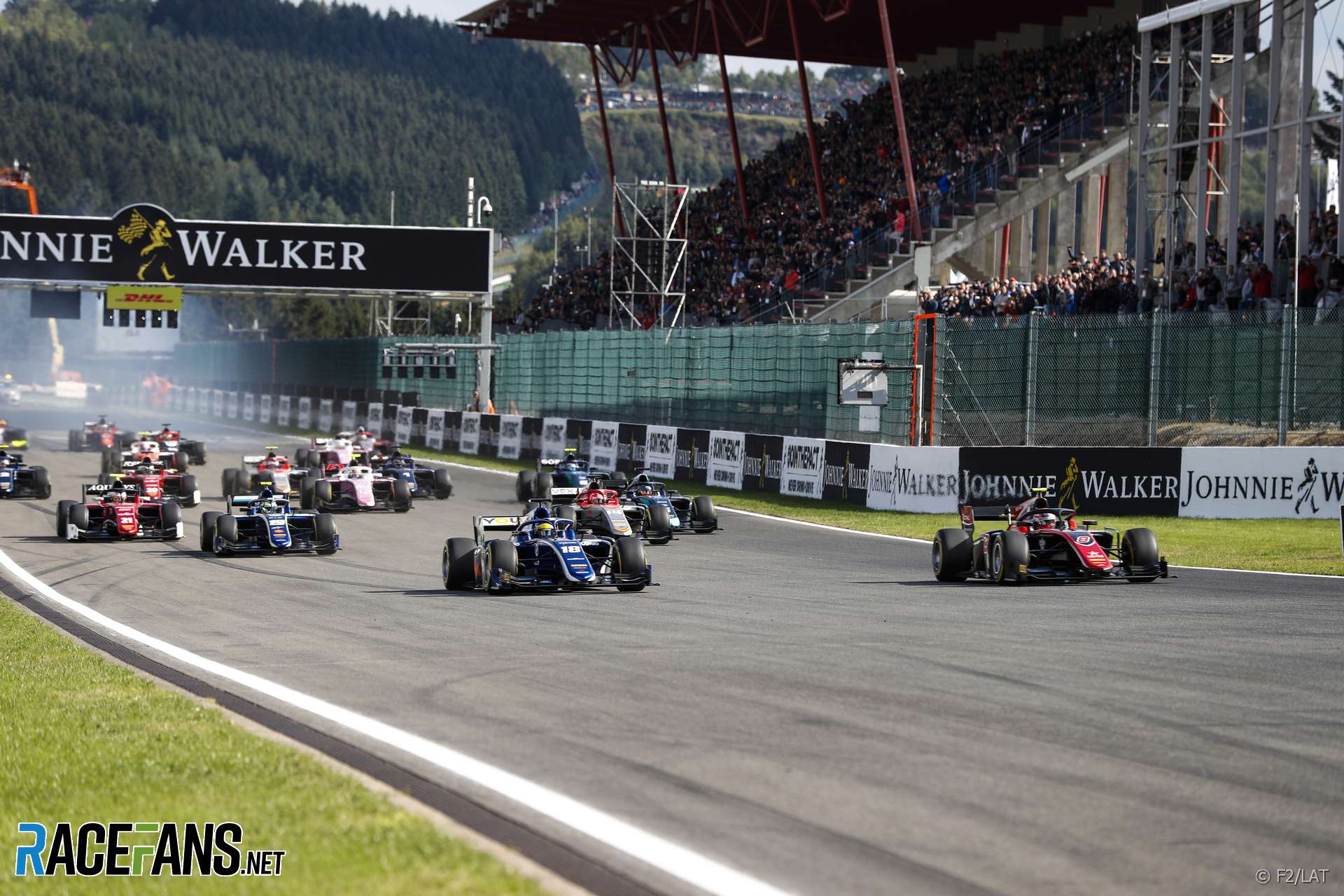 He crossed the line ahead of Sergio Sette Camara and battling championship contenders George Russell and Lando Norris.

De Vries started from pole ahead of Russell second and last year’s winner Sette Camara. The action nearly started early as Sette Camara narrowly avoided colliding with De Vries while lining up to the grid.

Wheelspin when the lights went out held Russell and Sette Camara back, giving De Vries a handy lead. Albon, Ghiotto and Norris made a three-wide break up the Kemmel straight that Norris came out ahead of, moving himself up to fourth as Russell slipped back behind Sette Camara to third.

Albon and Ghiotto subsequently battled fiercely, with Ghiotto making the move for sixth place on the kerbs of La Source. Although conditions were technically dry by the time the F2 race started, after a greasy end to F1 qualifying, misty spray was clearly visible off the back of cars and the type of gutsy overtaking F2 is notorious for even bolder than usual.

After a few disappointing races Artem Markelov seemed back on form – returning to the scene of his first podium at this level and an F2 win last year, he moved from tenth to seventh in the first four laps, before snagging former teammate Ghiotto at the Bus Stop for sixth.

The window for mandatory pit stops opened on lap seven and as most drivers started on the soft compound, many came in to change onto mediums. Fourth-place Norris was told by his engineer to eke the tyres out for two more laps, as Nirei Fukuzumi started a cascade of pit stops including Russell and Norris finally coming in on lap nine.

De Vries, who started on the soft tyre but with a comfortable lead, gained from pit stops to extend the gap to second-place Markelov to over eleven seconds by the time he came in on lap ten. Rejoining in eighth, he found himself well back from the lead and on cold tyres, struggling in the pack and with strange smoke coming from the back of his Prema.

Lap 15 saw Fukuzumi, plagued with horrible luck all season, retiring with his Arden very much on fire. Fukuzumi got out of the car safely but it occasioned a full Safety Car – a sudden gift to race-leading Markelov, who still needed to pit and change for soft tyres with just ten laps to go.

The safety car came in on lap nineteen with De Vries restored to the lead and freshly-booted Markelov in eighth. Albon, on the same strategy as Markelov, was even closer behind the leading pack in sixth with the two men ahead of him in the championship, Russell and Norris dead ahead of him.

Oil on the circuit at turn 16 saw a yellow flag out in sector two, as Boschung lost control and ended his race sideways into a wall, screaming in frustration by the side of the track. A virtual safety car was avoided, despite the trackside hazard and the race continued with just a yellow-flagged midsection.

De Vries maintained control of the race, Sette Camara behind and Russell and Norris unable to catch the pair. By the penultimate lap Norris found himself under further pressure from behind, as a DRS-enabled Albon hunted him down with rain beginning to hit the track.

Albon made the move up Raidillon, trying around the outside but being forced to back off before he could make it stick. Behind them, Ghiotto found himself even closer to a charging Markelov.

In the end, no moves stuck and De Vries took the victory at his “nearly-home” race, his first feature race win in F2. Followed by Sette Camara and Russell, with Norris rounding out the top five and keeping Albon in sixth.

Markelov took seventh place, following a repeat of last year’s drag race to the line where he managed to out-accelerate Ghiotto and the top ten was completed by Nicolas Latifi, Maximilian Gunther and Roy Nissany.

De Vries’ win sees him overtake Markelov for fourth place in the championship standings. “Today was a tough one,” he said, “we were very strong on the option tyre and then lost a gap after the pit stop – we even had a safety car that obviously didn’t help.”

He credited the win to staying calm and keeping to strategy, despite unpredictable circumstances.

Ghiotto’s eighth place gives him reverse-grid pole for tomorrow’s sprint race. Markelov will join him on the front row.