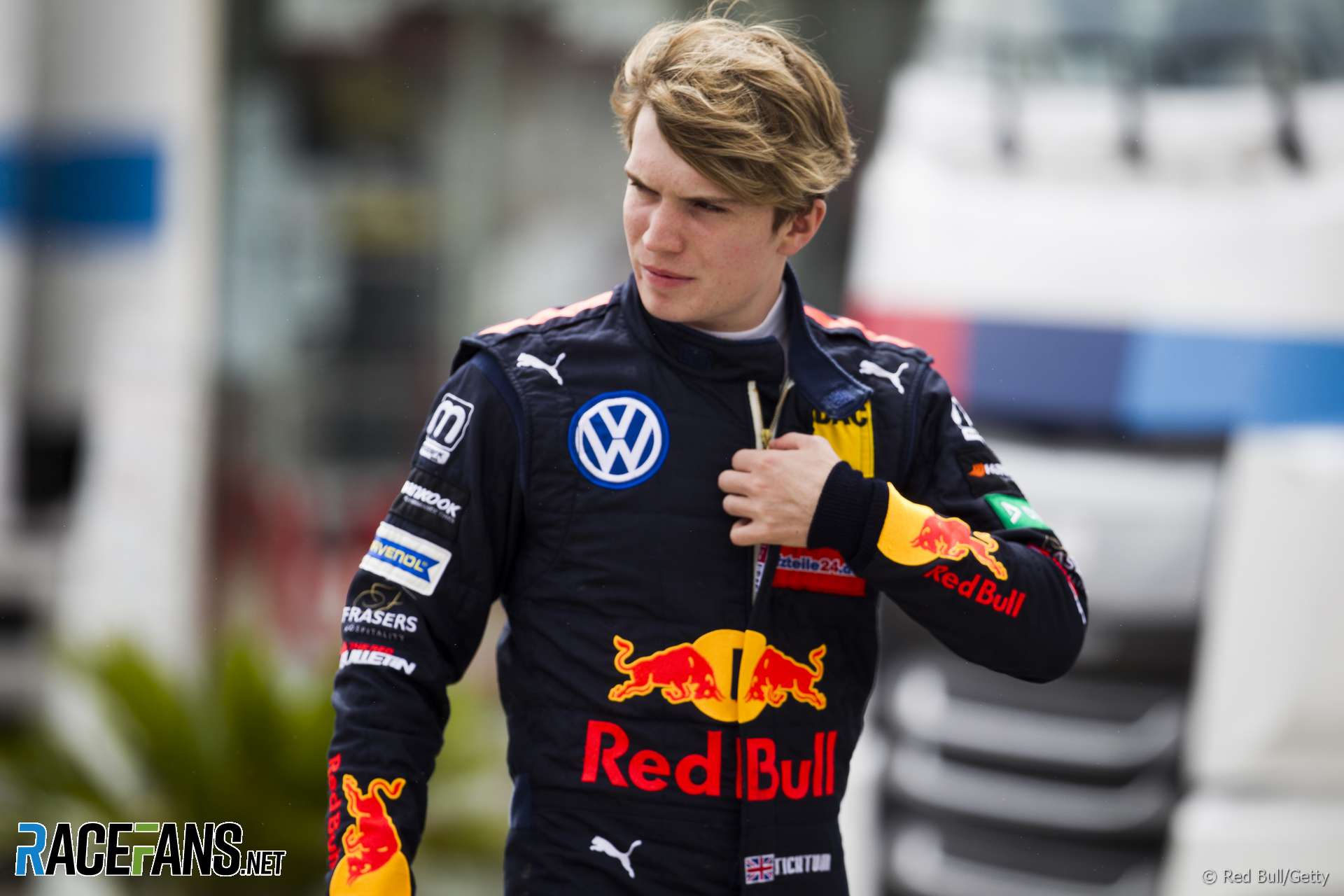 Red Bull junior driver Dan Ticktum made insinuations about the “interesting” performance of two of his Formula Three rivals after losing the championship lead to Mick Schumacher with one round to go.

A sudden reversal in fortunes has seen Ticktum go from a 26-point lead over Schumacher in the championship 18 days ago to a 49-point deficit. There are 75 points still available in the season finale at the Hockenheimring.

The son of seven-times Formula 1 world champion Michael Schumacher has hit a strong run of form in the second half of the championship. Having taken just 64 points from the opening 12 races, he has more than doubled his scoring rate since, adding a further 265 points in the 15 races since.

One of Schumacher’s team mates in the five-strong Prema squad, Ferrari Driver Academy member Robert Shwarzman, has also performed much more strongly in the last two race weekends. The pair appear to be the subject of a social media post by Ticktum yesterday after Schumacher and Shwarzman finished in the top two places for the fifth time in the last six races.

“Not ideal is the best way I can describe the weekend here in Austria,” wrote Ticktum. “I don’t like pointing fingers at anyone but to be honest, this weekend the pace in the car was not there. Set-up mainly, as in the last race when we got the car better, we were pretty quick climbing from 7th to 4th.”

“However compared to the top two no one on this grid had a chance. Even their other team mates [Guan Yu Zhou, Ralf Aron and Marcus Armstrong] who are good drivers were nowhere compared to them. Interesting is how I would describe their pace and I am confident many people in the F3 paddock will agree.”

In a series of replies to his followers Ticktum denied he was making “insinuations” and did not indicate what he believes is behind the sudden upswing in form about the two Prema cars. “They may just have a special engine map or something,” he said in one reply. “I never said it was illegal.”

In a broad respond to the many comments his post received, Ticktum indicated the data he had seen from race weekends provoked his suspicions about his rivals’ performance.

“To all people who have left negative comments on here… this is the one and only response you will get from me, so enjoy it,” Ticktum wrote. “I’m not a sore loser. Neither am I salty. I have a huge respect for Mick who had dealt with a lot in the past few years.

“I am simply suggesting that it seems to have come from nowhere? I never said it was illegal. I appreciate I have lessons to learn still! I’m not denying that.

“You don’t know the real story because you are not at the track looking at everyone’s data. So I’m afraid I have to tell you that your opinion is invalid under these circumstances.

“I’ll say it only once more, unless you have something constructive to say, leave your useless, ill-thought comments off my page as they have no evidence to ratify the truth. If you want to talk to me [direct message] me as I can answer your questions if you may have some!

“Unfortunately however I am fighting a losing battle as my last name is not Schumacher.”