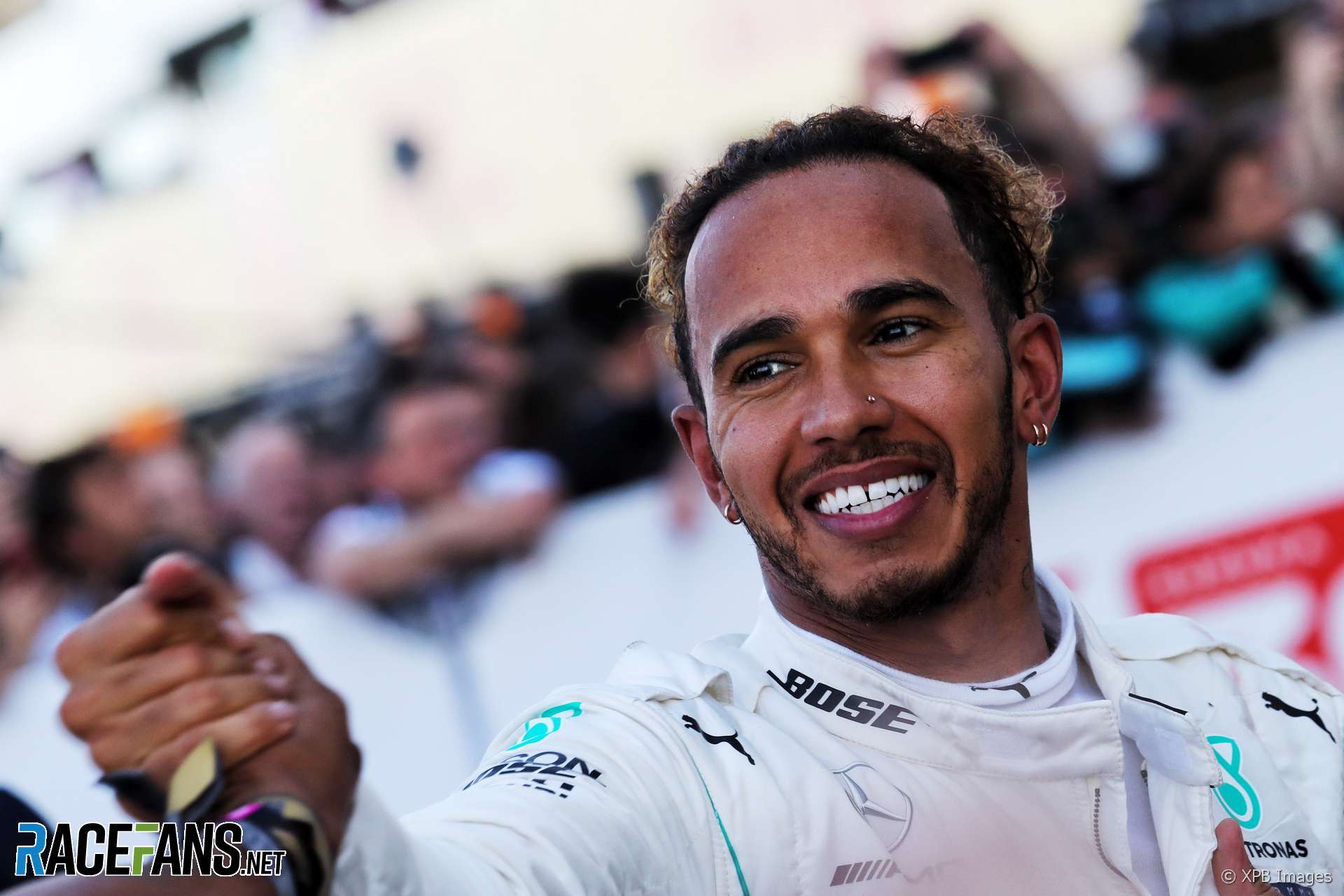 The destiny of the 2018 world championship titles looked set before Suzuka. A fourth consecutive victory for Lewis Hamilton and second one-two in a row for Mercedes means it’s now all over bar the shouting.

In a repeat of last year, a championship which for so long looked set to go down to the final races has swung decisively in Mercedes favour. At no point during the Japanese Grand Prix weekend did they look like losing the race, while the increasing desperation of Sebastian Vettel and Ferrari grew ever more obvious.

Verstappen vs Ferrari part one

Vettel’s weekend started to go wrong in qualifying. Both he and the team slipped up in Q3: The latter by sending him (and Kimi Raikkonen onto a dry track with intermediate tyres, trying to second-guess the weather. Then Vettel made two mistakes on what turned out to be his only clear lap.

That left him ninth on the grid. He was promoted to eighth by a three-place penalty for Esteban Ocon, who was confused by his radio beeping when red flags were shown in final practice and, thinking he was driving too slowly, accelerated above the minimum speed.

Ahead of the weekend there was much speculation about what had happened to Ferrari’s performance advantage. Had the FIA recently added a second sensor to monitor its engine which suspiciously coincided with a drop in power? No: that sensor had been on the car since much earlier in the season.

And as the opening laps of the race showed, Vettel was hardly wanting for power. He shot past the Honda-spec-three-powered Toro Rossos on the run to turn one, then drew alongside Grosjean on the sweeping run from the hairpin to Spoon Curve, his super-soft tyres giving him a traction advantage over the soft-tyres Haas.

Meanwhile Kimi Raikkonen used his Ferrari power to put Max Verstappen on the defensive heading into the chicane. The Red Bull driver locked a wheel, ran off the track, the rejoined at the apex of the following corner on a line which was clearly intended to cause maximum inconvenience to Raikkonen.

Unsurprisingly, Verstappen laid the blame for the subsequent collision at his rival’s feet: “I braked a little bit too late into the chicane, so I did everything I could to get back onto the track and I think I did it in a safe way, because I was not crazy-fast onto the track.

“But Kimi chose the wrong line in the chicane. He could have also just waited for me to come back on the track.”

Of course Verstappen could just as easily have “waited” by rejoining the track in a safe manner and might even have done it without losing third place. He was handed a five-second penalty for the incident, which he called “really ridiculous”.

This ultimately handed Vettel a gift-wrapped third-place: He swept around his delayed team mate and was perfectly poised to benefit from Verstappen’s imminent penalty. Top his credit, Vettel wasn’t prepared to sit back and wait, and pounced on the first opportunity he had to get the place back.

A Safety Car period handed him the chance. Once again he got a strong run out of the hairpin and arrived at Spoon charging down the inside of Verstappen. He got far enough alongside that the initial contact was front wing to front wheel, though whether Vettel would have made the corner without the Red Bull to lean on is a debatable point.

The pair made further contact with Vettel’s front-right wheel to Verstappen’s left-rear. This tipped Vettel into a spin and, fortunately, did not flip Verstappen’s car. Indeed the Red Bull driver kept going without losing a place, while Vettel fell to the back of the field with a damaged car.

“He drove into the side of my car,” was how Verstappen saw it. “In that corner you can’t overtake,” he added, a strange comment from a driver who’s made passes in unexpected places his trademark. Vettel accused Verstappen if failing to give him sufficient room.

Realistically, this was a text book racing incident. In the context of the championship situation for Vettel his high-stakes, low-percentage move had been a risk worth taking. But it condemned him to a long slog through the field for a mere sixth place in the race and, in all likelihood, second place in the championship.

Hamilton was never seriously rivalled at the front. By lap 22 he was five seconds clear of Valtteri Bottas, which afforded Mercedes the luxury of being able to pit Bottas first, thereby ensuring that even a surprise Safety Car appearance wouldn’t cost Hamilton the lead.

The only concern for Hamilton came when he reported glitches with his power unit. These were resolved, however, and he motored home with a comfortable 13-second margin over his team mate.

This was because Bottas had come under threat from Verstappen. As he had started the race on super-softs, he was able to switch to the preferable soft compound tyre for his final stint, while Mercedes were forced from softs to mediums, not wishing to risk the fragile super-softs.

Bottas fared much less well on these tyres than Hamilton, while Verstappen made inroads on his softs. A late Virtual Safety Car period compounded Bottas’s woes and brought Verstappen within range. The Mercedes’ superior straight-line speed meant he never looked likely to capitalise, however.

Daniel Ricciardo arrived in fourth which was a surprise given he’d started 15th due to yet more Renault power unit problems. His progress had been aided by the collision between Charles Leclerc and Kevin Magnussen which brought out the Safety Car.

The incident began when Magnussen got by Leclerc at 130R on the first lap. Leclerc came back at him on the pit straight but Magnussen, leaving it late, moved to cover. Leclerc tried to swerve back to the left but hit the Haas square up the back at a point on the track where speeds hit 300kph.

The pair were passing under the start line gantry at the time and the consequences had Leclerc’s car been launched upwards don’t bear thinking about. Leclerc left the world in no doubt what he thought of Magnussen’s “stupid” driving. Yet once again the stewards ruled the Haas driver had done nothing wrong: this was his fourth consecutive investigation for a driving infringement which resulted in no action being taken.

It ended his race, however. Magnussen sustained a puncture which caused floor damage and forced him out. Nor did Leclerc see the chequered flag: he slithered off the track on deteriorating tyres, then parked up.

Pierre Gasly led the ‘best of the rest’ class after the start but was having to run his power unit in a more conservative setting due to problems with its calibration. Toro Rosso stretched both their drivers’ first stints out long enough to fit softs, but it cost both track position.

Romain Grosjean and the Force Indias jumped Gasly when he pitted. Sergio Perez, showing his usual flair for nursing a set of tyres, took the soft tyres for the final stint and used them to pass Grosjean’s medium-shod Haas after a VSC restart, in a move which left the startled Grosjean convinced his rival must have jumped the restart. Esteban Ocon followed them in ninth, ruing the grid penalty which dropped him behind his team mate.

Gasly held a grip on the final points place for Honda until, with three laps to go, he was passed by Carlos Sainz Jnr’s Renault. The sole remaining Sauber of Marcus Ericsson was 12th, the only distinguishing moment of his race coming when he rammed his team mate at the Safety Car restart.

A dreadful, wheel-spinning start destroyed Hartley’s start to the race and once his woes were further compounded by his strategy he came in a distant 13th. The McLaren pair were next, Fernando Alonso unimpressed by a mid-race penalty incurred after he was knocked off the track by Lance Stroll.

From the replay it was clear Alonso had use the contact as an excuse for cutting the chicane to a ridiculous extent. But he appears to be counting the days until he leaves the sport now, and couldn’t resist an opportunity to stick the boot into F1 once again.

As the race neared its end Raikkonen’s lap times tailed off badly. They took a big hit after the VSC period, which Ferrari hoped to use as an opportunity to bring him in, only to for it to end before he reached the pit lane entrance.

As Vettel drew closer to his team mate over the final laps it seemed Ferrari might consider telling Raikkonen to back off, hand Vettel fifth place and an extra two points, and help keep his title hopes alive.

After all, Vettel had strenuously defended Mercedes’ use of team orders in the previous race. But Ferrari gave Raikkonen no message telling him to move over.

Or they could have brought Raikkonen in for some fresh rubber, surrendering the place to his team mate without need for an instruction. But this didn’t happen either.

If Ferrari or Vettel still thought this title was winnable, he would have been given fifth place. The fact he wasn’t shows the towel has been thrown in. A 65-point deficit is so much to gain over four races that it might as well be 67.