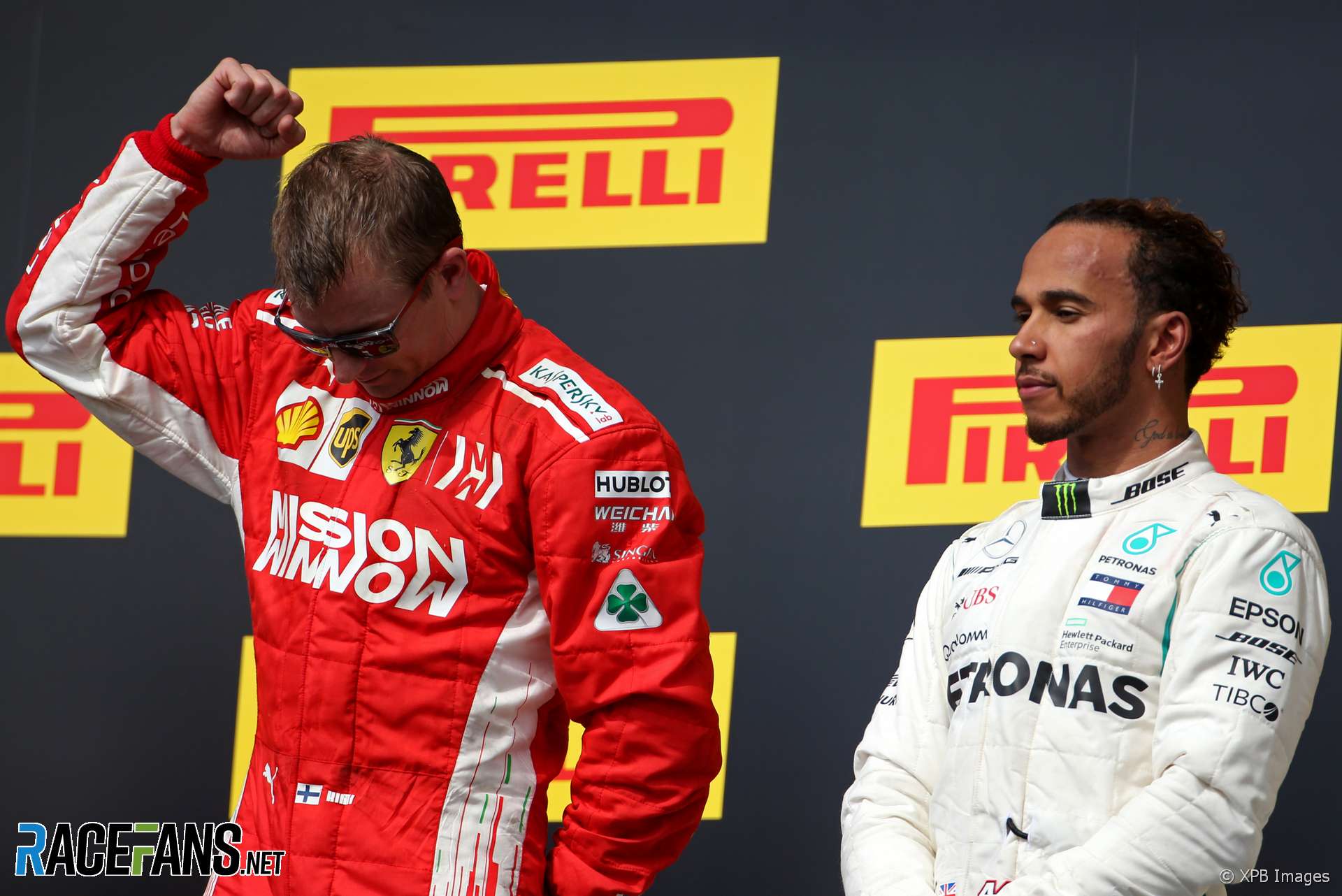 Lewis Hamilton arrived at the Circuit of the Americas aiming for his fifth win in a row this year, his fifth consecutive United States Grand Prix victory and – best of all – his fifth world championship title.

But the stars failed to align for him as Ferrari made a leap forward by taking a step backward. As Sebastian Vettel revealed after the race, the team transformed the performance of their SF71H by removing nearly four months-worth of updates.

That should have given Vettel the platform he needed to deliver a late blow to Hamilton’s bid. Instead he let his title rival off the hook once again.

Vettel shoots himself in the foot

The front row of the grid should have been the same as last year, with Hamilton on pole position and Vettel alongside. But a three-place grid penalty for a red flag infringement during practice relegated Vettel to fifth.

Vettel was at pains to paint himself as the victim of an over-zealous stewards’ decision. The fact of the matter in the grid penalty he received is exactly the same as what previous drivers got for the same infraction, and is in fact more lenient than the five-place penalty recommended by the FIA’s guidelines.

There were 14 drivers on-track when the red flag came out. The other 13 all reduced their speed as required. Among their number were two test drivers – Lando Norris and Sean Gelael – with limited experience of this level of competition.

If they can do as they are supposed to, a four-times world champion has no excuse for taking almost half a minute to reduce his speed. This is another in a litany of errors by Vettel and Ferrari which have done at least as much damage to their championship position as their recent loss of pace. And it wasn’t his last this weekend.

Vettel shoots himself in the foot again

Just as Vettel did 12 months earlier, Raikkonen dive-bombed Hamilton to take first place when the race started. Ferrari split the tyre strategies between their penalised and unpenalised drivers, and Raikkonen used his softer rubber to great effect.

Further back Vettel was making amends for his practice indiscretion by edging Daniel Ricciardo aside for fourth place. But only temporarily. The Ferrari driver snatched a brake and ran wide at turn 12, allowing Ricciardo back in the fight.

Ricciardo drew alongside Vettel on the outside as they rounded the following corner. The pair banged wheels and Vettel spun – again. This is the third clash this year and the third different rival Vettel’s been up against where he was the one to spin despite holding the inside line.

“I think initially he had a bad exit out of 12 but then I came back,” Vettel explained. “I had the inside but I guess he didn’t see me so we went side-by-side.

“Then it was quite clear he tried to go around the outside and we touched pretty much wheels-on. After the touch I lost the car and spun.”

The midfielders are now well used to Vettel’s number five Ferrari looming in their mirrors during the opening laps, and so by lap 12 he was back up to fifth place. Max Verstappen, who’d started 18th, made it that far by the seventh lap, and was on his way to an excellent result.

Hamilton kept Raikkonen in range during the opening laps, hoping the Ferrari drivers’ softer tyres would fade quickly. Track conditions on Sunday were hotter than Saturday, and with no meaningful dry running on Friday teams were in the dark about how their tyres would perform. A pre-race instruction from Pirelli telling teams to increase their rear tyre pressures by 1.5psi further complicated matters.

On lap nine Daniel Ricciardo’s Red Bull came to a stop – a total power unit shutdown similar to the one he experienced in Bahrain. The Virtual Safety Car was deployed, and Mercedes spied an opportunity.

Hamilton was told to do the “opposite” to Raikkonen at pit entry, and he duly ducked in as Raikkonen continued. He switched from super-softs to softs and rejoined the track in third behind his team mate, Raikkonen just eight seconds ahead.

It seemed a tactical masterstroke, particularly as Bottas was never going to hold him up. But rather than hang back and nurse his tyres to the end, Hamilton pressed on in pursuit of Raikkonen. Were Mercedes planning to pit twice?

By lap 19 Hamilton was all over the Ferrari, but understandably circumspect about getting physical with his championship rival’s team mate. Raikkonen kept it clean and defended smartly. “For sure my purpose is not to be any more aggressive against him than anybody else,” he said afterwards. “I don’t believe in doing crazy things.”

Being bottled up behind Raikkonen wasn’t doing Hamilton’s tyres any good but his options were limited. On lap 21 Raikkonen finally headed for the pits. “At a certain point the tyres are going to fall off and there is not a lot you can do,” he said. “We had a pretty good battle. I tried to stay as far as I could.”

Soon afterwards Hamilton’s tyres began to fade. Then he hit traffic, which made matters work. The blistering on his rear tyres was visible, and as Raikkonen began to draw him back in Mercedes bowed to the inevitable and pitted Hamilton a second time.

This left him behind not just Raikkonen, but also Verstappen, who had jumped Bottas thanks in part to the time the Mercedes driver lost letting his team mate go by. It set up a tense finish to the race as Verstappen, on super-softs, edged closer to Raikkonen while Hamilton gained on the pair of them.

With Vettel only having made it as far as fifth, Hamilton could clinch the title if he dislodged Verstappen from second place. With two laps to go he made his move, drawing Verstappen off-line and diving for the outside through the fast sweep of turns 16, 17 and 18. Verstappen allowed his rival room, but Hamilton had too much momentum for the available grip and took to the run-off.

With that, Hamilton’s title celebrations were put on hold for another week and Raikkonen’s triumph was assured, as Verstappen lost a second to the Ferrari. One the penultimate lap Vettel overtook Bottas for fourth, so even if Hamilton had taken second the championship wouldn’t have been decided.

Afterwards Hamilton felt he could have won the race with a one-stop strategy, but losing the lead to Raikkonen at the start compromised him. “Pace-wise, I think we were very, very close. But the whole deficit, they kept putting me so far behind, I could have told you exactly what was going to happen once we had those big gaps that we had to catch.”

Mercedes team principal Toto Wolff admitted they “underestimated how easy or how fast he could overtake”. Aside from Verstappen and Vettel’s recovery drives, there were notably few passes elsewhere in the field.

Great starts by the Renault drivers put them on course to grab a ‘best of the rest’ one-two which boosts their chances of holding on to fourth in the constructors’ championship. They were aided by post-race disqualifications for one of each of their principal rivals’ cars, both due to fuel use violations.

Esteban Ocon’s Force India and Kevin Magnussen’s Haas were thrown out after the race. The latter exceeded his maximum allocation of 105kg of fuel, having been urgently warned about his “critical” fuel situation in the final laps. That promoted Sergio Perez to eighth and Brendon Hartley and Marcus Ericsson into the final two points positions.

Fernando Alonso, who won’t be doing quite as much racing in America next year as was first suspected, only managed a single lap before being punted out by Lance Stroll. The McLaren driver has been increasingly vocal in his complaints regarding F1 and this time was no exception as he laid into the quality of driving after another first-lap exit.

While Alonso’s comments may have become rather predictable, it was hard to disagree with him. Stroll launched his Williams at the McLaren in a zero-percent move which the stewards rightly penalised with a drive-through penalty. Stroll, however, couldn’t bring himself to accept his share of the blame: “I had a portion of my car there and I don’t think he saw me,” was his assessment.

Afterwards Vettel reflected that while Ferrari’s progress was positive, the fact it had come by downgrading their car’s specification showed their development programme had gone seriously awry. This may be true, but his errors have compounded their problems, particularly in recent races.

“For sure once shit hit the fan it didn’t get better,” said Vettel of his first-lap error. “I think there were too many of those incidents.

“I don’t believe in luck or bad luck but surely here and there maybe things didn’t go our way entirely. But it’s how it is.”

While Vettel slipped up again, Raikkonen proved a worthier foe in Austin. But it’s unlikely either will be able to stop Hamilton’s coronation at the next round.