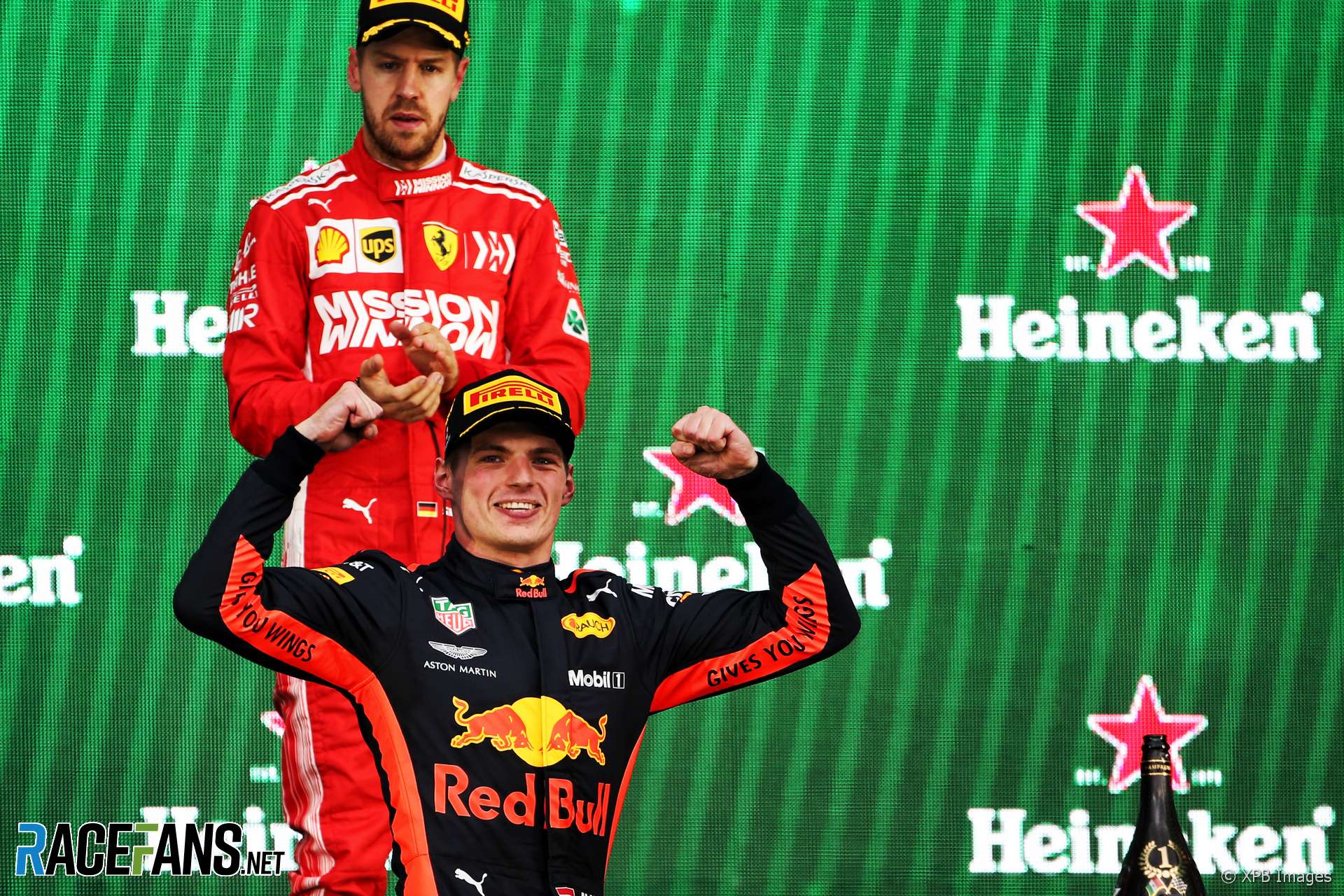 For the second year in a row Max Verstappen upstaged the championship contenders by winning the Mexican Grand Prix while Lewis Hamilton finished off Sebastian Vettel’s hopes.

For the second race in a row Mercedes suffered with their tyres which allowed Ferrari to take advantage. But Red Bull capitalised even more successfully and were on course for a one-two before yet more unreliability struck down Daniel Ricciardo.

Verstappen was thoroughly miffed, to put it mildly, that Ricciardo upstaged him for pole position on Saturday. The number 33 Red Bull had headed all three practice sessions and looked the car to beat heading into qualifying.

But once again Verstappen was frustrated by the throttle response from his engine during his flying lap. Ricciardo nailed the final two sectors and nabbed pole by less than three-hundredths of a second. Which, as it turned out, was also about as long as he led the race for.

When the lights went out Ricciardo let the clutch slip too quickly and Verstappen was instantly by into the lead. Hamilton followed too, and drew alongside Verstappen on the outside of turn one. With the title on the line, Hamilton was never going to take a silly risk, so Verstappen led him and Ricciardo off on the rest of lap one.

Vettel held fourth ahead of Valtteri Bottas, all having started on the harder and strategically preferable ultra-soft tyres. So had Kimi Raikkonen, but he was mugged by Carlos Sainz Jnr’s hyper soft-shod Renault and had to reclaim sixth place at the start of lap two.

“The initial start was OK,” Raikkonen explained. “I was following Seb and then somehow that side of the road slowed down in the middle of the straight.

“I went on the other side but obviously I was behind Seb going through the first corner, and didn’t really want to get involved. I lost one place and got it back the next time around on the straight, so it wasn’t a big deal.”

“I think it was a bit unexpected how the tyres behaved,” said Verstappen. “Maybe with the hyper, yes, but with the ultra, I think nobody really expected it to be like this.”

The front runners’ pace began to drop off around lap eight and they soon appeared in the pits for super-softs.

“Very quickly, in the weekend I think that we saw that the super-soft was quite a strong tyre,” Verstappen added. “Luckily I had two. I didn’t use any in practice, I just saved them for the race in case we needed it and clearly we needed it.”

Mercedes were struggling the most and tried to get the jump on their rivals by bringing both cars in on lap 12. They performed the stacked stops impressively well – both were among the nine quickest complete stops of the race.

But the W09 chewed its super=softs too, and soon both drivers were in trouble. By lap 23 Hamilton had Ricciardo and Vettel on his tail, but the pair dropped back as the Ferrari attacked the Red Bull. After diving down the inside of his rival at turn one, Vettel set after his championship rival.

Hamilton wasn’t about to try any funny business with Vettel, who sailed past him on lap 38. At this stage in the race Vettel was taking half a second a lap out of Verstappen. If he could get into the lead, and Hamilton dropped out of the top seven, the title fight would continue to Brazil.

By now Hamilton was losing well over a second a lap to Verstappen and urging his team to take action. He’s already run off the track at turn one. On lap 46 Ricciardo took third place off him and Mercedes finally responded, bringing him in for a second set of super-softs.

Vettel came in on the same lap, dropping to third behind Ricciardo. Red Bull had been kinder to their tyres and their strategists were wondering if a one-stop strategy could deliver a one-two finish.

Verstappen had enough of a lead to make a pit stop and stay ahead, so they brought him in for a fresh set and studied his discarded rubber. The team concluded Verstappen could have made it to the end of the race, and chose to leave Ricciardo out. Vettel would have to pass both Red Bulls to win the race.

Hamilton had fallen behind Raikkonen but was in no further danger as far as the championship was concerned unless his car stopped. The gulf between the top six cars and ‘Formula 1.5’ was even greater than usual: Hamilton was around two minutes ahead of seventh-placed Nico Hulkenberg.

On lap 56 Vettel looked poised to strike on Ricciardo, then fell back. The Red Bull driver pulled out of DRS range and with 10 laps to go it seemed Red Bull had put a lock on their one-two. But Ricciardo’s clutch had begun faltering on lap six, and a sudden failure left him coasting to a stop. It was the latest in a series of cruel retirements.

An alarmed Verstappen urged the team to let him turn his engine down as a precaution. It held, and he delivered a well-earned second win of 2018. With that, Vettel’s title hopes were over, and Hamilton’s fifth championship was assured.

Force India’s strategy gamble failed to pay off. Sergio Perez drove with great verve at his home race but was forced to retire when his brake pedal went long. Esteban Ocon ruined his race when he lost his front wing by getting too close to Carlos Sainz Jnr on lap one.

With the pink cars out of the points, Hulkenberg and Charles Leclerc made good use of their unfancied hyper-soft tyres at the start to claim sixth and seventh. Marcus Ericsson made it a double points finish for Sauber in ninth, lifting the team ahead of Toro Rosso in the constructors’ championship, despite Pierre Gasly climbing from 20th to 10th.

Gasly’s team mate Brendon Hartley started 14th after an error in qualifying and a clash with Ocon further hindered his bid to add to the team’s points tally. Hartley, whose position at the team is in doubt, has become increasingly vocal about his situation, and this result which won’t have done him any favours.

However Stoffel Vandoorne, who is already on his way out of Formula 1, claimed an excellent eighth for McLaren. Team mate Fernando Alonso retired after debris from the Sainz-Ocon clash lodged in his radiator.

Hamilton has produced many excellent drives throughout 2018. But in Mexico, hamstrung by tyre degradation, he could do little more than count down the laps until he was champion. His relief afterwards was obvious, though not immediate, as it clearly took time for his achievement to sink in.

Contrarily, Vettel drove one of his better races after a series of poor runs. He was also a model of sportsmanship out of the car, congratulating Hamilton and Mercedes on their successes, though the constructors’ championship remains up for grabs.

Hamilton’s had-won success inevitably overshadowed Verstappen’s superb run to victory. It was a success several weeks in the making, as Red Bull had arranged their power unit programme and taken penalties in earlier races to maximise their chances of winning in Mexico.

“I think credit where credit’s due,” said team principal Christian Horner. “Renault have provided us with an engine this weekend in these conditions that is competitive with our opponents’. And that’s enabled us to go head-to-head, lock out the front row and win the grand prix in a dominant fashion. Theoretically we should have had a one-two here.

“I think the altitude of this circuit obviously does constrain some of our rivals and it puts Renault into a window where they’re competitive which is why we put an awful lot of focus in this race and taken the penalties to get another B-spec [engine] into the pool to have for this weekend.”

The 2018 season may have been all about Mercedes and Ferrari, but Mexico was a reminder what Red Bull could do with a consistently competitive power unit.