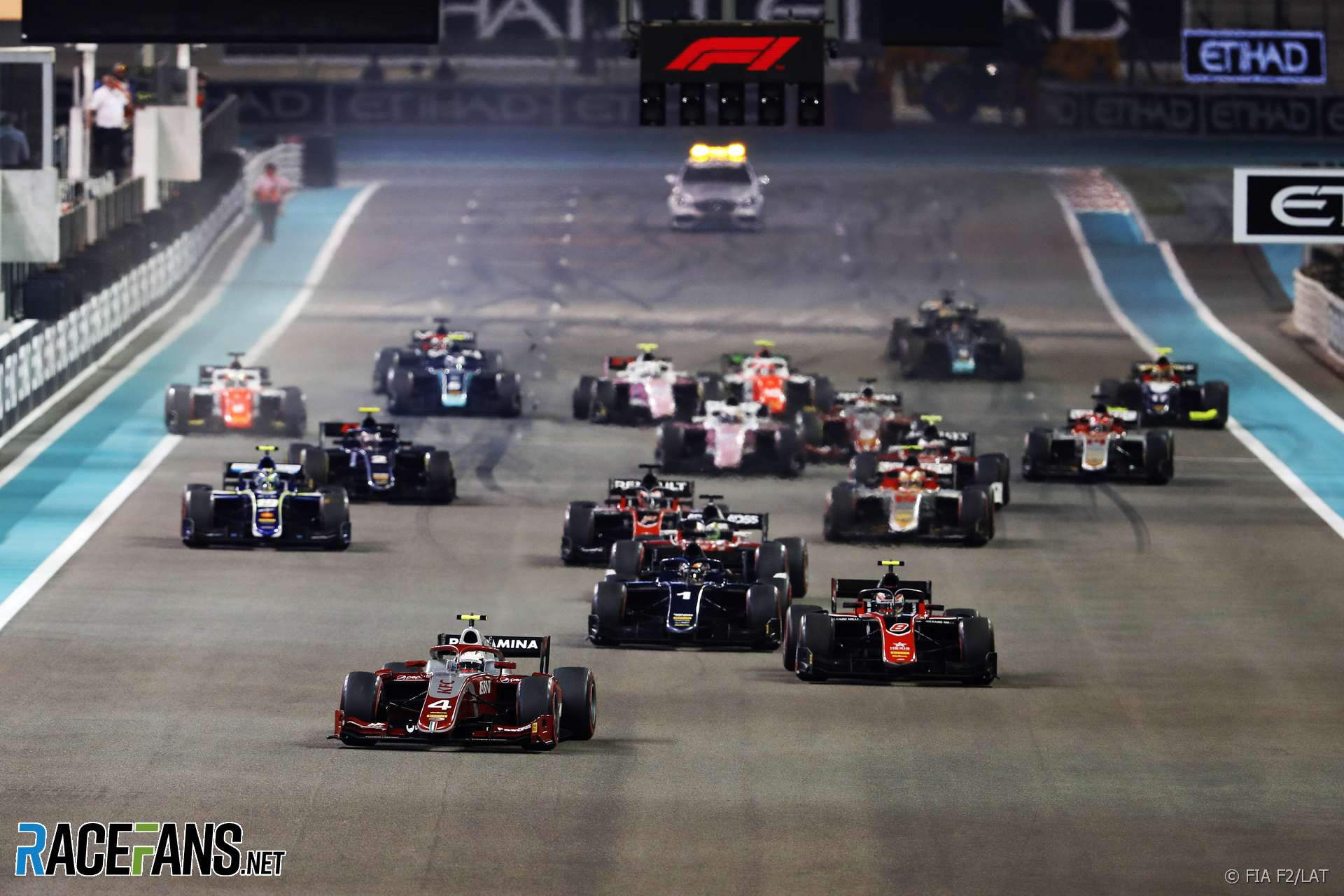 George Russell clinched the Formula 2 championship by taking his seventh victory of 2018 in Abu Dhabi.

The 2019 Williams driver saw off the threat from Alexander Albon after his rival stalled at the start. The dramatic opening seconds of the race saw Albon’s team mate Nicholas Latifi involved in a huge crash when he also stalled and was hit from behind by Arjun Maini.

Russell went into the race with a 41 point lead over Albon, after claiming his fifth pole of the season at Yas Marina. With 44 points available, Albon’s chances were slim at best after he qualified eighth, and rested on Russell failing to score.

De Vries got a superb getaway from second on the grid, taking the lead while Russell had wheelspin that saw him defending from fourth-placed Markelov by turn one. However, if Russell had been worried about Albon making up places early he needn’t have been.

Both Dams cars stalled on the grid, Latifi from third with nearly the whole grid to pass him. Most drivers managed to evade but with space reducing towards the back of the grid, an evasive move from Nirei Fukuzumi left Arjun Maini nowhere to go but into the back of the Brazilian. With Albon stalled, Sette Camara behind him had nowhere to go and stalled as well, an echo of the problems seen at the start of this year when the new F2 car was introduced.

Both Latifi and Maini’s cars were wrecked and the pit straight strewn with debris, sending the safety car out to take cars through the pit lane while marshalls worked for five laps. Fourteenth-placed Sean Gelael collected a penalty for pit lane speeding during this period, making it very, very slightly easier for the restarted and lapped Albon and Sette Camara to move up the grid.

The restart on lap seven saw De Vries maintain the lead – despite an almost immediate error that pushed Russell close to hitting him. The two did make contact at turn 11, with no apparent damage but a firm wheel nudge over the kerb.

The safety car period had massively extended potential tyre life but with ART having given Russell free rein on when to come in, he pitted on lap nine for his longer-stint tyres. De Vries pitted the following lap and came out just ahead of Russell but with cold tyres that couldn’t maintain the lead.

Albon, on alternate strategy, made it up to seventh from the back by lap 12 – entering an extended fight with Lando Norris and and Deletraz that saw the next-year McLaren driver come out on top for fifth. Norris continued his storm up the grid, taking fourth place from Markelov on lap 13.

Markelov, however, is not a straightforward driver to pass – and the Russian refused to let Norris get a lead on him, the cars inches apart through the chicane. Two laps later, Markelov re-took fourth and pulled out nearly a one-and-a-half second lead on the Carlin driver.

Due to the extended safety car period at the start of the race it went down to time rather than running the full lap distance, giving drivers some very strategic decisions to make about how far they could push their tyres either side of the mandatory pit stop. With twenty minutes to go, Luca Ghiotto had a twenty second lead over Russell – nearly enough to make a clean pit stop but with probably only ten laps to go.

Albon, forced back after his own stop, ended up in a fight with Toro Rosso rival Dan Ticktum (taking newly-announced Formula E driver Maxi Gunther’s Arden seat for the final F2 races) over tenth place. A long way from anywhere that could save his championship attempt, with Russell running in second.

With just nine minutes – and a handful of laps – to go Luca Ghiotto was issued a five-second time penalty for leaving the track and gaining an advantage after cutting turn eight. Having drawn out a 24 second lead, he had looked as though he could pit and still keep the win from Russell and was pushing to draw it out. Ghiotto continued running a clear second per lap faster than his rivals but was running out of time to make a stop.

At the same time, Artem Markelov stormed past Nyck De Vries for third, quickly gaining on second-placed Russell and pushing the fight to the last few laps – however many remained in the last seven-and-a-half minutes.

However, with Ghiotto forced to pit back to fifth no one could challenge Russell for the win – letting him take the championship with a victory, becoming the first ART champion since Stoffel Vandoorne, on 277 points. Russell is the fifth rookie to win the title and has equalled Vandoorne’s wins record with one race to spare.