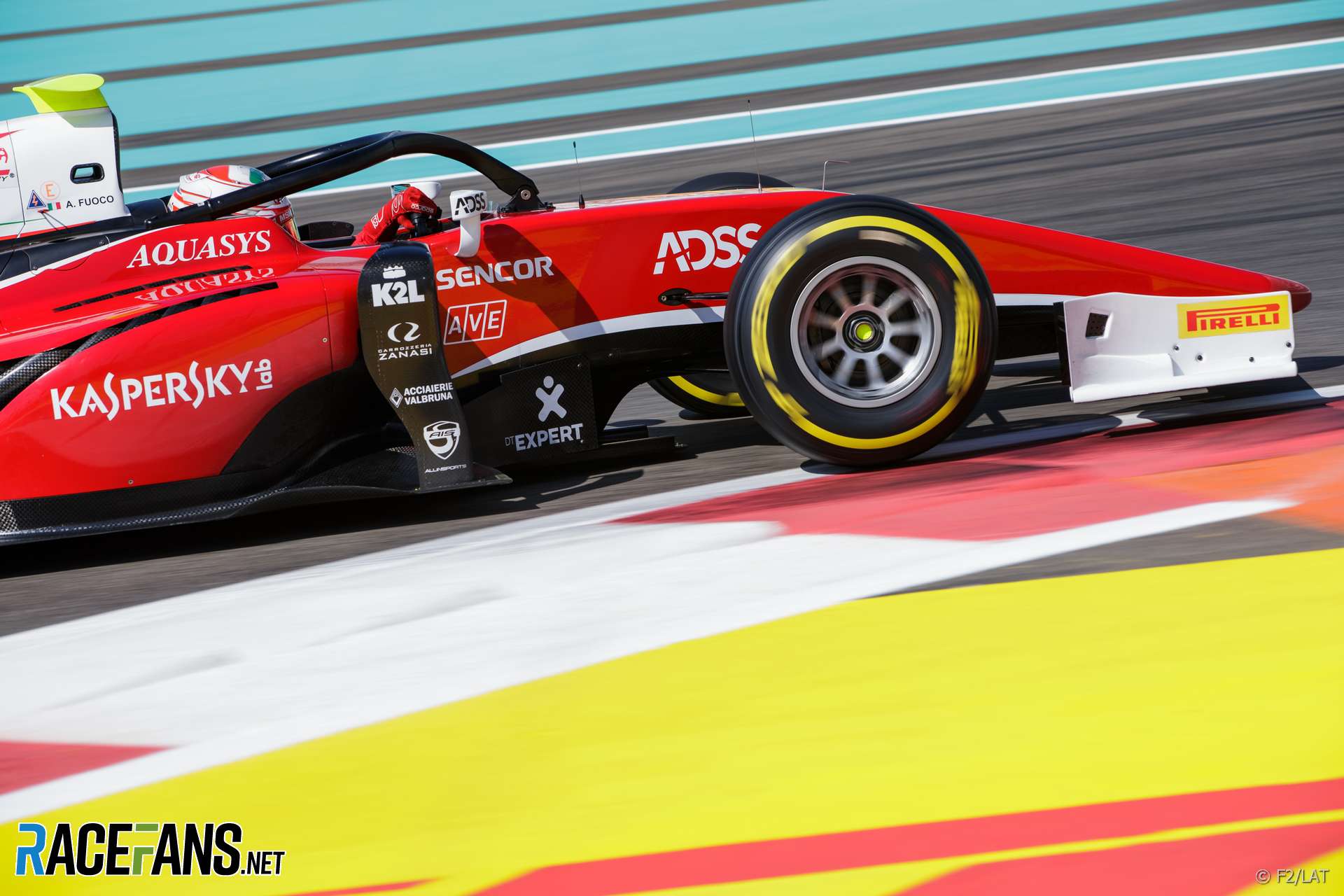 Antonio Fuoco brought the Formula Two season to an end with his second victory of the year as a total DRS failure hit the entire field in Abu Dhabi.

Lando Norris and Roberto Merhi joined him on the podium after exchanging places on the final lap, meaning Norris grabbed the runner-up spot in the championship from Alexander Albon.

Both titles had been decided during yesterday’s feature race, with Carlin taking the teams’ trophy as George Russell took the drivers’. But Nyck De Vries had eyes on Norris’s third place on the standings heading into the race, while the 2019 McLaren F1 driver was keen to end a win-less streak which stretched back to the second race of the year.

Arjun Maini, who went out of yesterday’s feature race following a collision with Nicolas Latifi, stalled on the formation lap – prompting another tour of the circuit before cars got to the grid. Sergio Sette Camara, whose car had failed to get away yesterday, also stalled and Latifi then again stalled on the grid, not getting away although thankfully avoiding contact this time.

Lap two saw Sean Gelael lock up while overtaking Niko Kari, hitting the back of the rookie’s car and taking both of them and Tadasuke Makino out of the race in a colossal spin that brought the virtual safety car out for the following two laps.

By lap four Arden’s Dan Ticktum was out, telling his team on the radio his gearbox had failed. With five cars out it was shaping up to be a race of attrition, Fuoco largely unchallenged for the lead he’d grabbed at the start.

Yesterday’s winner Russell started from eighth on the reverse grid and caught up to Norris by lap 10. He was within DRS range, but his team confirmed to him on the radio that the overtaking aid was unavailable to any driver, a problem which persisted until the end of the race.

With tyre management essential on the hot track this effectively neutralised much of the remaining eleven laps. Artem Markelov made a few aggressive attempts to pass Louis Deletraz and after repeated off-track adventures was told to “keep cool” or he’d face a reprimand, having narrowly avoided a stewards’ investigation.

The rest of the action waited for the penultimate lap, when Albon managed a move on Ghiotto for eighth in a valiant attempt to keep second-place in the drivers’ championship, after losing first to Russell yesterday. But Norris was able to pass Merhi on the final lap, securing both second place on the podium and second in the championship, and celebrated with a ‘stoppie’ in front of his Carlin team.