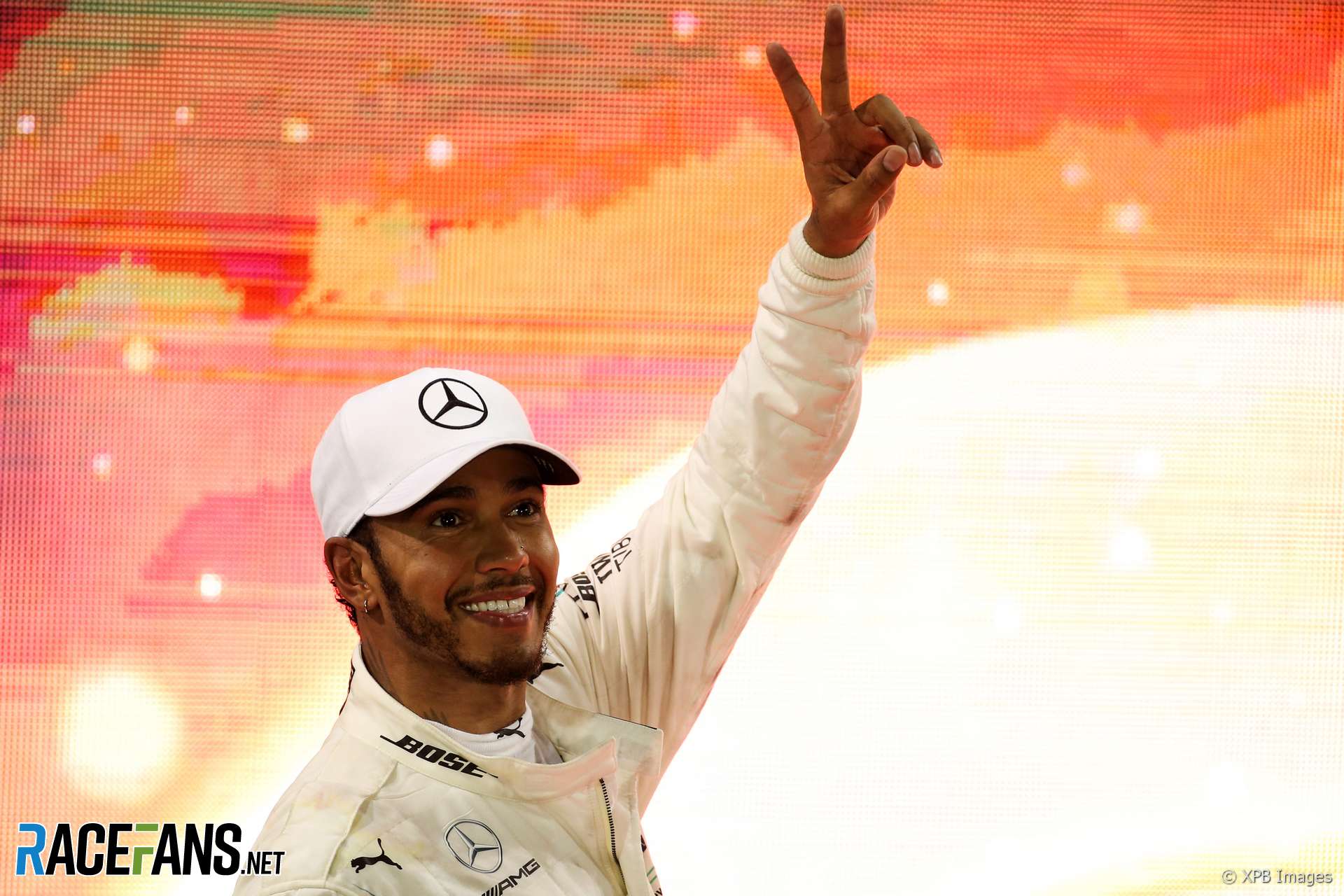 Lewis Hamilton controlled proceedings in the Abu Dhabi Grand Prix, delivering his 11th win of the year and heading into the off-season on a high.

Behind him, the race provided more action than Yas Marina usually manages to serve up, particularly with both championship decided before the race began.

From his 11th pole position of the year, Hamilton easily kept the lead at the start as the top five cars held grid order through turn one. But from sixth on the grid Max Verstappen fell into the clutches of the midfield after his engine went into its ‘safe mode’.

“There was a long hold on the grid today and the engine temperature started to creep and creep,” explained Red Bull team principal Christian Horner, who suggested Renault had tightened up the software limits on the power unit following Daniel Ricciardo’s stoppage earlier in the weekend with a header tank problem.

Nico Hulkenberg and Romain Grosjean were among those who passed Verstappen, which gave him a perfect view of the collision between the pair which brought the Safety Car out. Hulkenberg dived down the inside of the Haas at turn eight, then swung into the next corner as if the Haas wasn’t there. It was, and the contact flipped Hulkenberg upside-down onto a barrier.

There was a momentary fire at the rear of the car, which alarmed Hulkenberg as he hung upside-down waiting to be recovered. Afterwards FIA race director Charlie Whiting said Hulkenberg’s extraction had gone as planned and there was “nothing to worry about”. However the race was neutralised while the extraction team headed to the scene.

Ricciardo fails to go out on a high

In his 100th and final race for Red Bull, Daniel Ricciardo led 17 laps and looked like a victory contender at one stage. But this was only ever a mirage created by the unusual circumstances of the race.

Kimi Raikkonen, also in his final race with his current team, dropped out on lap seven when his Ferrari’s electrics failed. After sitting on the start/finish line trying to coax his unresponsive power unit back to life, he climbed out, and the Virtual Safety Car was deployed.

The timing couldn’t have been better for leader Hamilton, as he and only he had enough of a gap to make a pit stop during the VSC and rejoin still ahead of the midfielders. He rejoined side-by-side with Verstappen, the Red Bull fractionally ahead, then moved passed him. Showing good presence of mind, Hamilton immediately slowed to give the place back.

The race restarted with Valtteri Bottas leading Sebastian Vettel, the Red Bull drivers, Hamilton and the rest. Within a few laps Vettel’s tyres were beginning to fade and he pitted, prompting Bottas and Verstappen to do likewise.

For Ricciardo, the best chance of salvaging anything from the race was to run long on his ultra-soft tyres, then attack the final stint. It seemed a viable strategy, particularly as he was able to go well past halfway on his first set of tyres. After his lap 36 pit stop, he resumed just 16.4 seconds behind Hamilton, though to Red Bull’s disappointment it turned out the Mercedes driver wouldn’t need a second stop.

When Ricciardo cut that gap to 13.8 seconds in one lap it looked like it was game on. “When he came out of it and went two seconds a lap quicker than the leaders we thought this would be another China,” said Horner. But his pace advantage proved short-lived.

Meanwhile Bottas was struggling. A right-rear brake was vibrating, which combined with the increasing wind and – a rarity for this desert island track – a spattering or rain, prompted a mistake. Vettel pounced and was through into second.

Soon the Red Bull pair were on his tail as well, Verstappen elbowing his way past at turn 13 before Ricciardo also took advantage. Bottas, with nothing left to lose, pitted for a fresh set of tyres and began to count off the laps to the end of the season.

Verstappen therefore took a third place which looked unlikely during his opening lap struggles. His engine had gone into safe mode again while he was trying to pass Ocon. “It was only when things got running properly the temperatures all came under control,” said Horner. “And by that point Renault were able to disable the alarm as well.”

That allowed Verstappen to see off Ocon. Perhaps frustrated by his engine, perhaps remembering the events of Brazil, he saw the Force India off with a particularly strong move at turn seven.

It was a lively afternoon in the midfield. Charles Leclerc impressively saw off both Red Bulls on the opening lap, aided in his move on Ricciardo by the Safety Car being deployed for Hulkenberg’s crash moments after he nosed ahead. He ran the same strategy as Hamilton and used it to great effect, finishing ahead of all the other midfield drivers except Carlos Sainz Jnr, who had the advantage of being allowed to start on new tyres.

The other Sauber didn’t make it to the chequered flag. Marcus Ericsson, in his final F1 race before moving to IndyCar, was passed by Carlos Sainz Jnr then retired a few laps later.

He was joined in retirement by Esteban Ocon, who had a great tussle with Pierre Gasly and Stoffel Vandoorne, though was unlucky to pick up a five-second penalty after he was unable to surrender a position he’d gained after going off the track. Further ill luck rendered that moot: His engine failed while he was running ninth.

Gasly joined him in retirement, also suffering an oil leak. However he contrived to spray most of it over future team mate Verstappen, who was trying to lap him at the time. These two retirements promoted the Haas pair to the final points places.

A few weeks back Fernando Alonso remarked that Yas Marina, the scene of his final race, was unlikely to be a strong race for McLaren, and he might as well cut all the chicanes. This sounded like a joke at the time, but his antics over the final laps made you wonder.

Having been told he was one place away from the points, Alonso remarked he already had 1,800 in his career, implying he didn’t need any more. He then repeatedly cut the chicane, collecting a trio of five-second time penalties.

When the chequered flag finally dropped on his F1 career, Hamilton and Vettel flanked him on the way back to the pits, and the trio lit up the start/finish area with a few doughnuts for the crowd. Given McLaren’s performance in the second half of the season, this was the closest Alonso was likely to come to ending his career on a high.

Hamilton’s second half of the season illustrates home dramatically things turned around for him this year. After winning three of the first 10 races, he was victorious in eight of the remaining 11 rounds.

In past seasons where Hamilton has wrapped up the title with races to spare he’s been accused of ‘phoning it in’ over the final races. Arguably, that left him on the back foot going into 2016, when he lost the championship to Nico Rosberg after his team mate won the final three rounds of the previous year.

There has been none of that this time. Victories in the final two races delivered the constructors’ crown for Mercedes and sealed his fifth title in emphatic style. Now with 73 career victories to his name, reaching Michael Schumacher’s records of seven championships and 91 race wins looks a genuine possibility in the next two seasons.

How realistic that chance is will depend to a great extent on Mercedes’ work over the coming weeks and months. The 2019 F1 season has already begun.