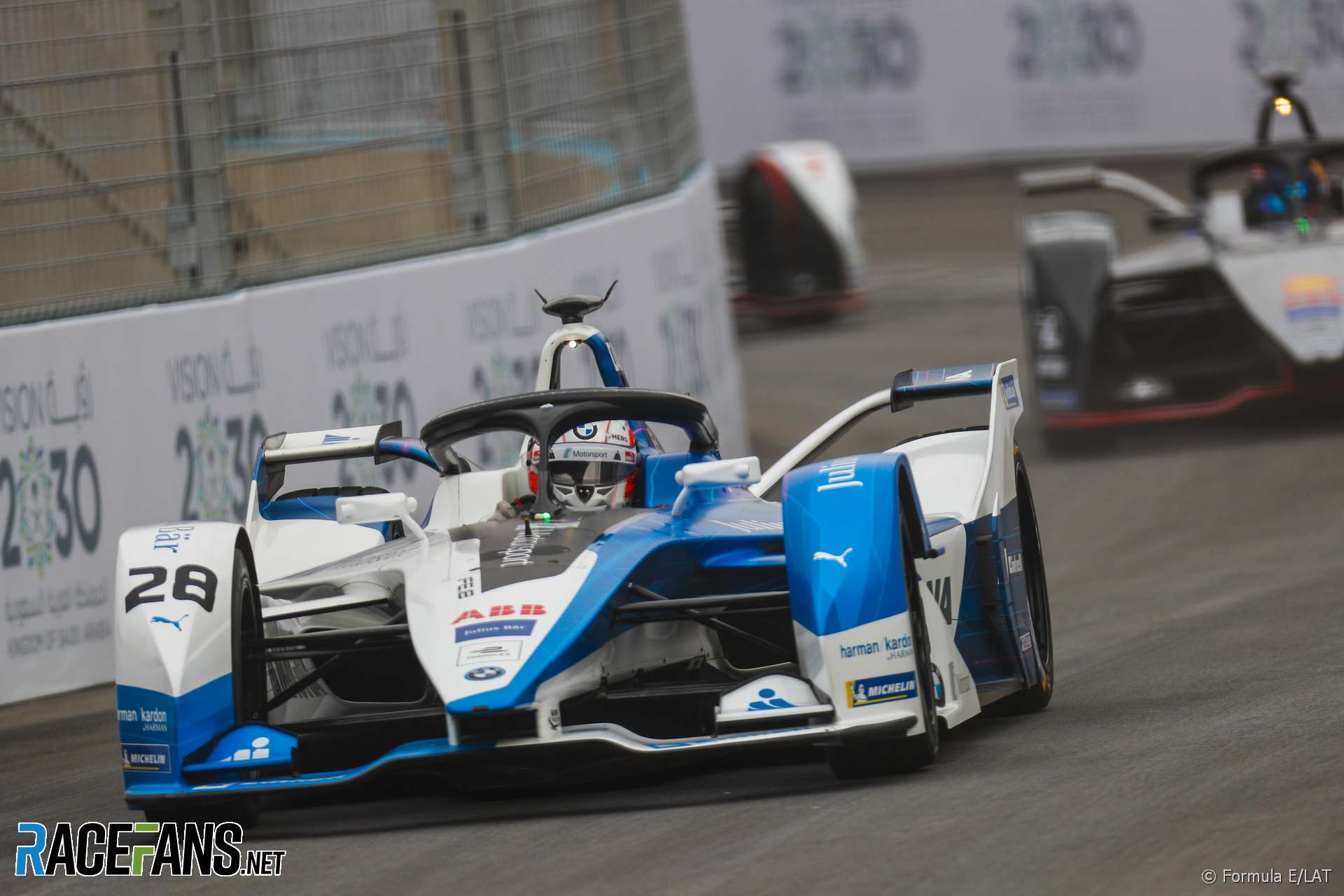 Antonio Felix da Costa saw off a sustained challenge from Jean-Eric Vergne to win the opening round of the 2018-19 Formula E season.

Pre-qualifying running had been very limited, with drivers saying they were able to manage seven or eight laps during a disrupted, 35-minute practise session before participating in a one-off altered qualifying format. As a consequence, setu-p time had been minimal and with all-new cars competing on a true Formula E street circuit for the first time, drivers were largely on their own with the quirks of the new format.

Pole man Da Costa’s problems started early when he initially drove to the wrong grid line, leaving his car slightly skewed from the start line and at risk of a rear lock up straight off the line. Fortunately for him, a poor getaway for Jose Maria Lopez left him able to correct into the corner and avoid getting gazumped immediately,

The pace of the BMW Andretti was undeniably strong in testing and they carried that performance into the race. Coming from dead last in last year’s results, it was a pleasing sort of giant-killer narrative if Da Costa came back in an astonishingly good vehicle.

However, reigning champion Vergne didn’t let go easily, slicing his way up the field including a particularly dominant overtake on a seemingly defenceless Sebastien Buemi. Within a few minutes of the race start, he passed Lopez to challenge Da Costa for the lead with team mate Andre Lotterer only inches behind.

A yellow-flag period following Edoardo Mortara losing control of his car into the same barrier he’d ended up in during the limited practice session might have bought Da Costa some clemency but before a third of the race time was up, he had been nabbed by the reigning champion.

Without practice sessions, however, teams hadn’t completed a lot of their setup, including power calibrations. As a result, multiple cars infringed technical regulations prior to and during the early stages of the race.

The most significant problem – one which proved impossible to correct on race day – was that both the DS Techeetah and Venturi-powered cars had incorrectly calibrated the McLaren-supplied battery management software, meaning that the batteries showed 100% before they were actually fully charged. Although stewards’ documents did not detail by what margin, this is an infringement of new regulations stating batteries must be fully charged at the start of a race.

Although this might seem like a bizarre rule to enforce (who, after all, would go out partially charged) having slightly less than full charge in the battery actually provides a regeneration advantage, allowing the battery to begin recovering power earlier. As a consequence, it’s being strictly enforced – and Vergne was issued a drive-through penalty that saw him sent back to fifth place.

NIO’s Tom Dillman and Oliver Turvey (themselves relegated to the back of the grid for qualifying power usage infringements, again probably due to a lack of full setup time) were the first drivers to activate Attack Mode during the race, with mixed fortunes.

Attack Mode was confirmed to be two periods of four minutes with the extra 25kW of power available, which must be activated before the end of the race. Available after three laps, it is activated by driving through a small, off-line zone that here required a driver to dice with a wall to gain the boost.

Turvey made it work, making a move on Maximilian Gunther to inch slightly closer to a potential points-finish but Dillman actually seemed to slide backwards, having lost too much time running through the activation zone to take full advantage of the power boost.

Jose-Maria Lopez had looked to be in a good position to score a podium, especially following the Techeetah penalisation, however he too struggled with Attack Mode activation. The Argentinian driver brushed a wall trying to get close enough to the activation zone, foxing his suspension and leading him sliding until the car’s rear wishbone collapsed completely with eleven and a half minutes of race time to go.

That might have made a space for Vergne to re-catch Da Costa, if it hadn’t been necessary to bring out a recovery vehicle to collect Lopez’ car. With the race effectively neutralised for five minutes behind the safety car, Vergne was forced to bide his time and wait for the restart to activate his second Attack Mode period.

Da Costa also had the boost, however, which meant he was able to hold onto the lead despite some very bold attempts by Vergne to take it on the final lap. Jerome D’Ambrosio held on to third as Andre Lotterer was caught behind a determined Mitch Evans, who matched his best on-track result again in fourth place.

Da Costa will leave Ad Diriyah with the drivers’ championship points lead – and teams like Audi currently licking their wounds will be planning to take full advantage of tomorrow’s in-season test to make up for lost running.