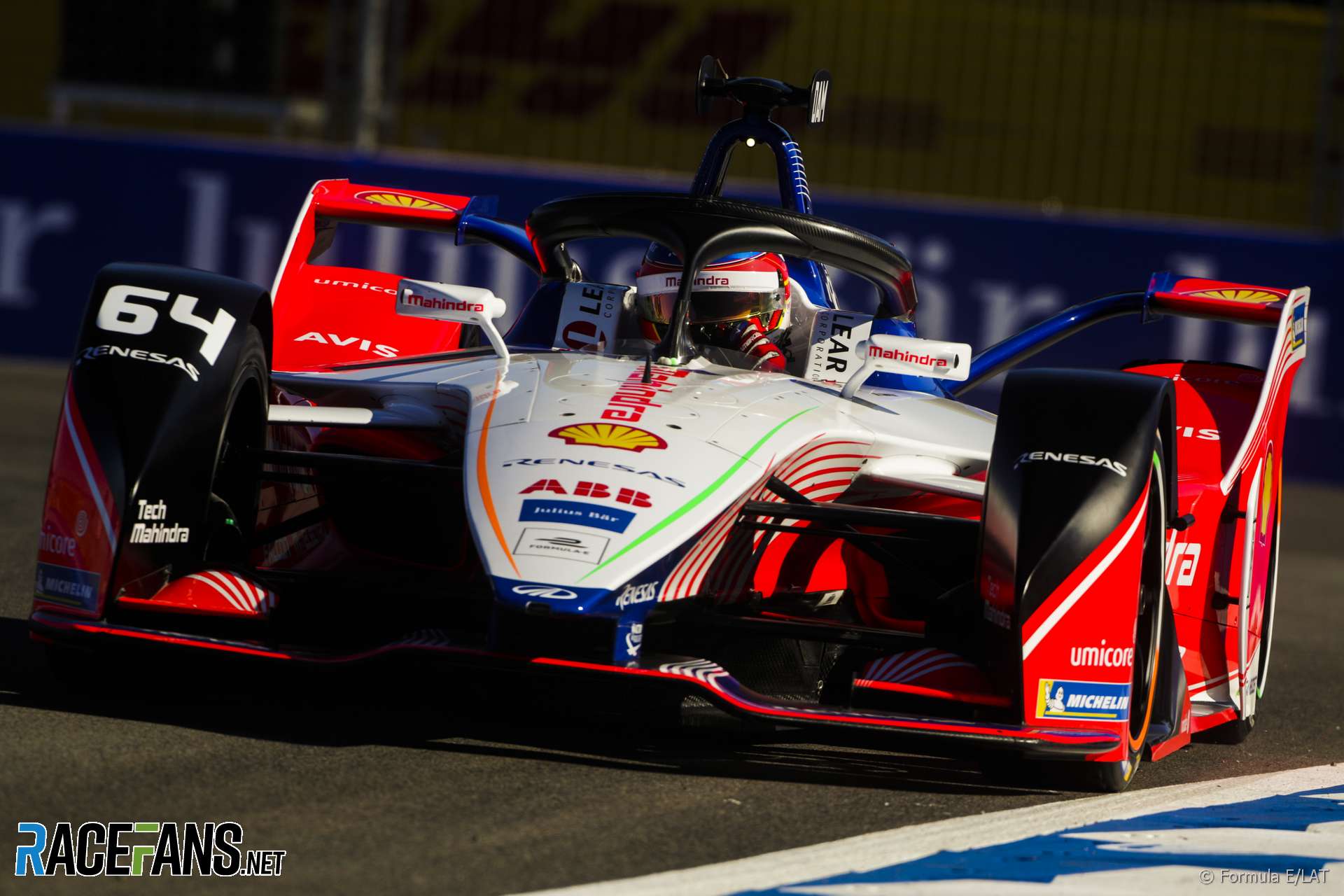 Jerome D’Ambrosio won a lively Formula E race in Morocco after the race-leading BMW Andretti team mates collided with each other.

Sam Bird had taken pole with what was surely a near-perfect lap in Super Pole, with Jean-Eric Vergne in second, Sebastien Buemi third, Alexander Sims in fourth place and Mitch Evans promoted to fifth after Antonio Felix da Costa’s Super Pole time was deleted for exceeding power usage limits during the session.

Vergne had a poor getaway, then seemed unable to brake into turn one – he collided lightly with Bird, span and pushed five cars wide to avoid him, relegated to last place by the time Bird had reached turn two.

Third-placed Buemi and both Jaguar cars were pushed out, leaving the BMWs space to move up to the lead, easily chasing Bird while other drivers attempted to recover, some with substantial diffuser damage.

The Attack Mode activation zone for the Marrakech Eprix was set at the outside of turn three, a much easier-to-reach part of the track than the inside of a corner, as selected in Ad Diriyah. Two mandatory periods lasting 240 seconds (four minutes) had to be armed and activated by each driver during the race. Attack Mode gives drivers an additional 25kW of top end speed, which was expected to have a more significant effect here on a high-throttle circuit, in comparison to the lower-power Ad Diriyah track.

Attack Mode is unavailable for the first two laps of a race and the first driver to activate it was Maximilian Gunther with 36 minutes of race time remaining – having crashed in qualifying, an early break was his best chance of a result and it had the desired effect, except to leave him with only one more activation and a sudden energy deficit, with each activation costing around 12% of usable remaining energy.

With 30 minutes to go, Bird was defending the lead hard from Da Costa but clearly struggling, the BMW right on his rear. At the time, Bird believed his already-damaged car, which had taken a hit to the diffuser during qualifying and again during the collision with Vergne – whether there was significant effect or not, he was unable to withstand the Andretti drivers and after Da Costa forced past, Sims swiftly followed.

Bird lost third place to team mate Robin Frijns 21 minutes into the race. It looked like an orchestrated recovery for Virgin but they were both swiftly passed by D’Ambrosio, at standard race pace, and then Lucas di Grassi with Attack Mode, then fell to losing further places as Jose-Maria Lopez plowed through and the BMW cars were free to break away from the pack.

With fifteen minutes to go, Da Costa and Sims had a substantial lead from D’Ambrosio and Di Grassi, after cutting their way through the pack, however, D’Ambrosio still retained two Attack Mode activations to the rest of the leaders’ one remaining.

Both Virgin cars armed attack mode with just under fourteen minutes to go in an attempt to recover places but with a seemingly irretrievable gap to the BMWs and D’Ambrosio still holding two activations in reserve.

After a seemingly perfect race with a surefire one-two finish, however, Sims and Da Costa suddenly clashed. Both drivers locked up, as Sims seemed to make a move around the outside of Da Costa and their front wings inexorably interlocked. Sims escaped the collision unscathed but Da Costa’s car went nose-first into a tyre barrier and out of the race.

A safety car had to be called to allow both car and driver to exit the track, meaning the race time counted down behind it and it seemed as though the result might have been neutralised early. However, a final lap re-start left Sims with a chance of redemption to change a post-collision fourth into a pyrrhic podium finish.

The four lead drivers were nose-to-tail in a train of defence led by D’Ambrosio but despite Sims’ best attempts – and Attack Mode – the order remained unchanged to the flag.

Marrakech is D’Ambrosio’s third Formula E victory, however, it is the only one he has stood on the top step of the podium for or achieved on track; both previous wins having been the result of Lucas di Grassi’s disqualifications.