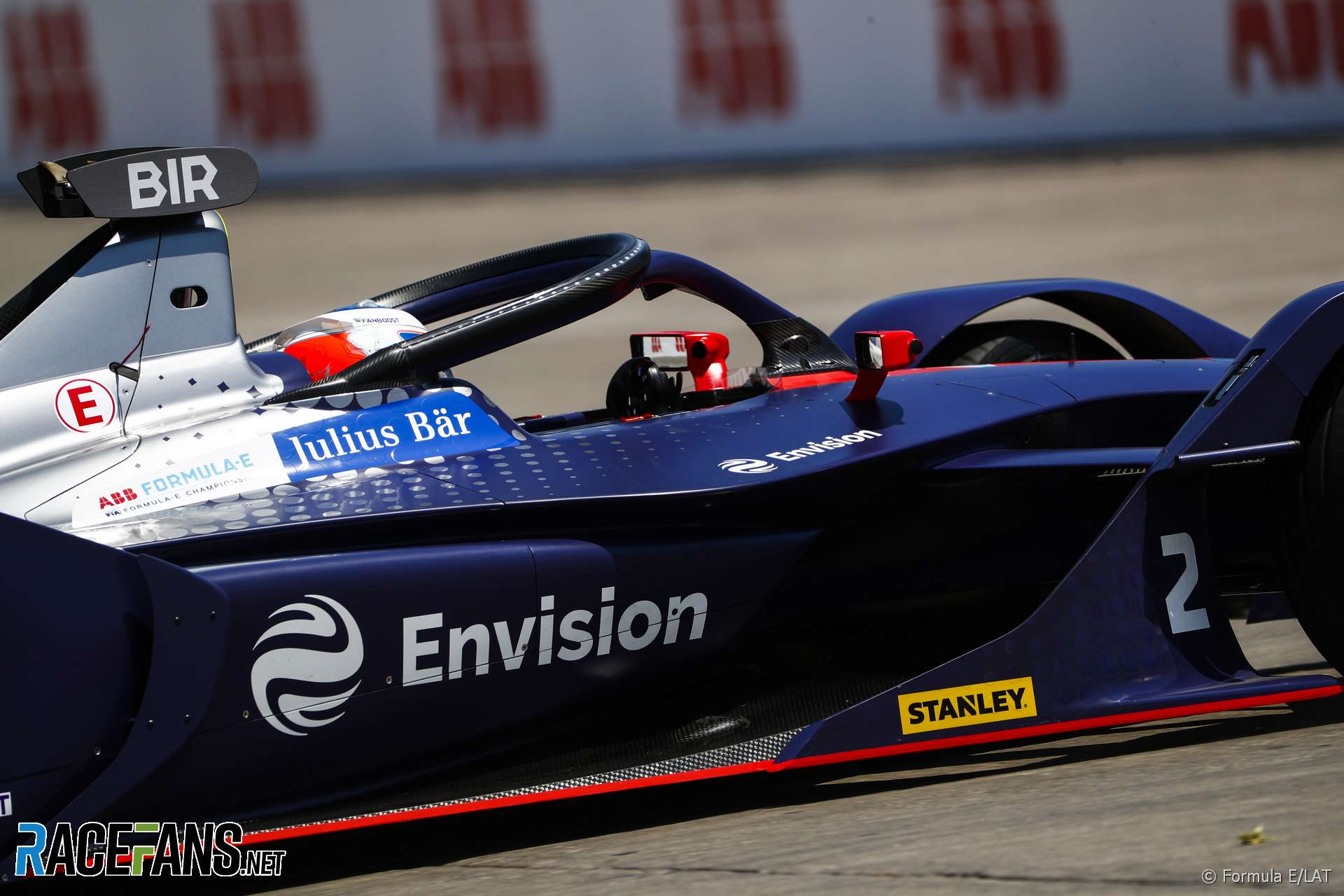 Sam Bird scored the eighth Formula E victory of his career in a retirement-strewn Santiago Eprix run in punishing temperatures. The Virgin racer inherited the lead when Sebastien Buemi threw it away, and withstood pressure from Pascal Wehrlein who shone in his second appearance in the series.

It was was officially Formula E’s hottest race, with track temperatures in excess of 38C. Heat pushes battery, brake and tyre limits – as well as challenging drivers wrestling 900kg cars on a dusty track, without Formula One’s power steering.

Lucas di Grassi was quickest in qualifying by an extraordinary 0.6 seconds. However he was found to have infringed brake safety rules on his return lap from group qualifying.

The sanction related to the incident at the previous round where Tom Dillman, unable to stop on the pit lane, damaged both Virgin cars. Following this Formula E’s brake manufacturers stipulated that drivers must not brake more on their in-lap than on their 250kW qualifying lap. In breach of this rule, Di Grassi was disqualified from all qualifying sessions and sent to last place, handing pole to Buemi.

After a clean getaway on a filthy track all 22 cars made it through lap one unscathed. However, with 43 minutes remaining Tom Dillman stopped on track, causing a short yellow flag period while he re-cycled his car to get moving again.

Race leader Buemi used his attack mode with 39 minutes to go, trying to make a gap between himself and Wehrlein. The activation zone, positioned on the outside of turn three, was to be used for two mandatory activations of four minutes each. Buemi had enough of a lead to stay ahead of the Mahindra, which was swiftly followed by third-placed Sam Bird, who used his extra mode to challenge the rookie.

With 34 minutes remaining, Andre Lotterer triggered a chain reaction at the hairpin to the detriment of his Techeetah team mate. Lotterr nosed Antonio Felix da Costa into Jean-Eric Vergne, spinning the reigning champion and eventually forcing him to retire with damage.

Bird made a clean overtake on Wehrlein with 33 minutes to go, despite the Mahindra also activating Attack Mode – though their battle had allowed Buemi to gain a significant lead.

Gunther, then running in a strong eighth, stopped on track just past the hairpin with 29 minutes to go. Unlike Dillman earlier, he was unable to restart the car and forced to retire, which left cars circulating under full course yellow for several minutes.

Just before the full course yellow was called, Edoardo Mortara and Alexander Sims allegedly collided in a strange spin that left Mortara facing the wrong way, allowing Sims and Stoffel Vandoorne through to fifth and sixth.

By this point track temperatures, especially on the asphalt elements of the circuit, were extremely high – and combined with the lateral g-force of the cars after several hours of running, this was pulling the surface apart. Already extremely dusty, the Tarmac itself was marbling, spreading huge chunks of road surface off (and sometimes on) the racing line. As a consequence, seemingly bizarre spins started happening as drivers struggled to retain control.

Jose Maria Lopez had one such spin at the hairpin, under the yellow flag for his stricken car. Lotterer had been making an interesting attempt to overtake Di Grassi (for which he would subsequently be investigated) at the same time, despite the yellow flag and forced Lopez slightly off-line and into the marbling.

The race restarted with 22 minutes to go, Bird immediately aggressively attacking Buemi for the lead only to return to full course yellow with just under 20 minutes to go after Vandoorne lost control, shattered the bodywork on his car and sprayed debris across the track.

Racing returned with 18 minutes left but soon afterwards Buemi threw his potential win away. The Nissan Edams driver smacked a wall, limped into the pits and handed Bird the lead.

Vergne and Da Costa added their names to a growing list of retirements when both pulled into the pits with 13 minutes to go, the earlier incident having damaged their cars too badly.

Meanwhile it seemed like a redemptive drive from Mortara for a top five finish, having lost Vandoorne ahead of him and furiously battling with Frijns as both activated attack mode. He had a more-than-near miss when he slid on the now gravel-like surface, hitting the chicane so hard polystyrene flew at Frijns, but held onto fifth.

With four minutes remaining, second-placed Wehrlein activated attack mode and drastically cut Bird’s lead. Both had roughly 20% usable energy remaining but Bird had no more attack mode activations. But at the same time Mahindra team boss Dilbagh Gill warned Wehrleinhis car was reaching critical temperatures and he needed to lift off to have any hope of bringing it home.

With low energy levels, high temperatures and a crumbling track surface, Bird and Wehrlein had no option but to lift and coast to the finish line. Bird crossed the line in first place, followed by Wehrlein and Sims.

However the BMW driver’s joy was short-lived: Sims was awarded a time penalty in lieu of a drive-through for causing the collision with Mortara earlier in the race, demoting him to seventh before he could even reach parc ferme.

Further post-race penalties were handed to Lopez and Di Grassi, readjusting the top 10 significantly and allowing D’Ambrosio up to eighth. Bird himself was placed under investigation for an underweight car, but was cleared.

By becoming the third different winner in as many races in the season so far, Bird has cut D’Ambrosio’s championship lead to a single point, and Virgin have taken the lead of the teams championship.