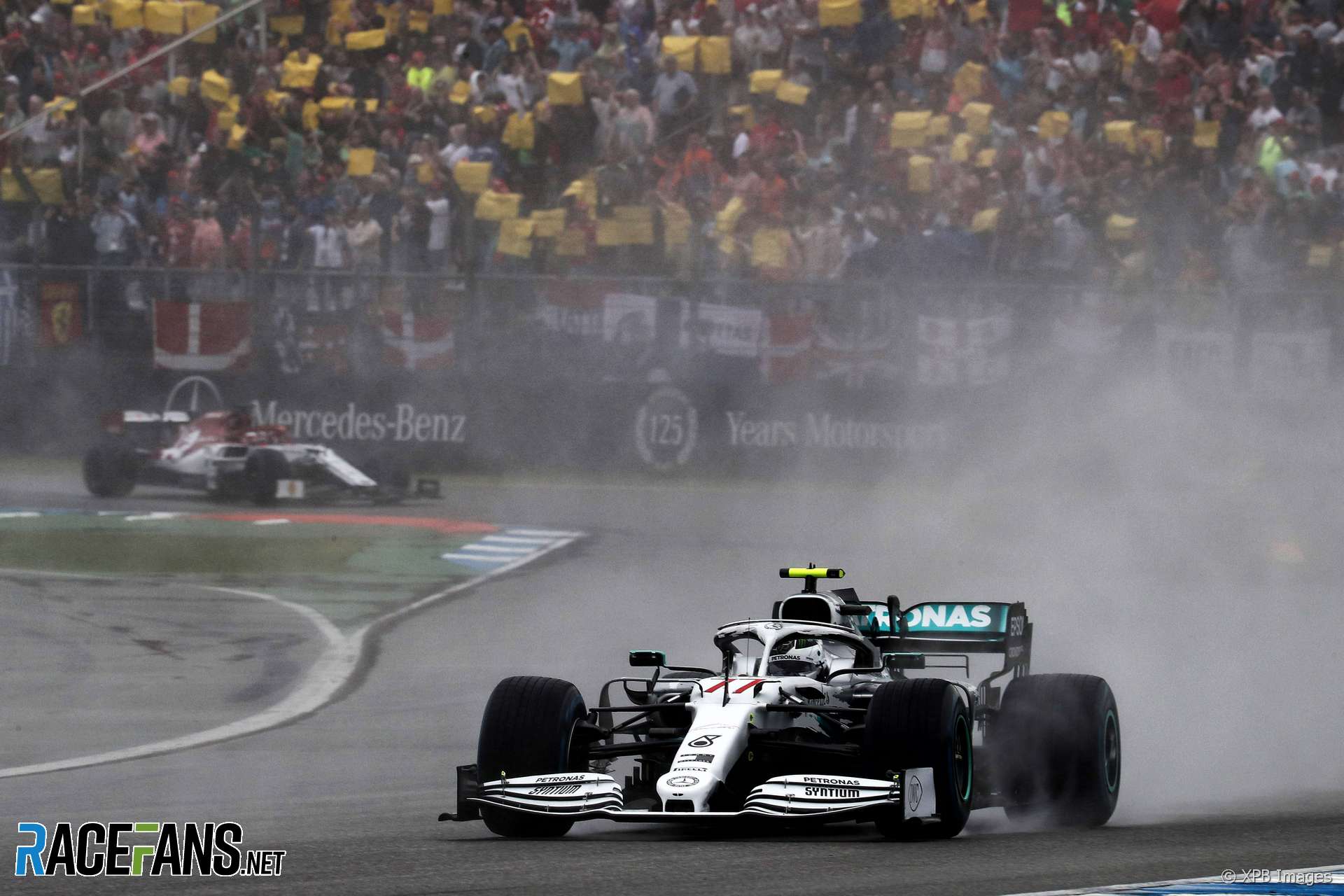 In the round-up: Valtteri Bottas says Mercedes hadn’t told him Lewis Hamilton had nearly crashed at the same corner where his German Grand Prix ended.

Show which drivers and teams you are supporting

Which F1 drivers and teams are you supporting this season? Here's how you can show your support for your favourite on the grid on RaceFans:

Bottas said the team tries to minimise radio chatter during wet races to avoid distracting the driver and so he wasn’t told Hamilton had nearly crashed at turn one shortly before his race-ending crash at the same corner:

I was not informed about that. There was obviously plenty of things going on in the race and for sure the team had to filter also in that kind of conditions what they informed me about, what kind of information they feel I should have.

It is more demanding mentally to drive in those kind of conditions and it doesn’t need much to make a mistake. Obviously you try to minimise the workload for the driver, for all the outside distraction and information. I didn’t get that information.

Maybe now looking back it would have been maybe nice. And it was actually only [when] I saw the spin and crash I had from kind of the top view and I could see only then the proper clear line of dry line and then wet line outside which wasn’t that visible in the car, actually.

From the next race, @ToroRosso will have a more experienced driver line-up than @redbullracing. #F1 #BelgianGP pic.twitter.com/c670OKhZ8u

I do feel for Gasly but F1 is a tough business & Helmut is a tough boss (he called me an old man when I was a 23 year old RB junior!)… Great opportunity for @alex_albon – driven very well so far with standout performances in China & Germany. Big challenge going up against Max!

Verstappen aside, what yet another mid season Red Bull decision actually shows is how utterly useless they are driver management.

Worth keeping in mind that yes, Gasly had half an F1 season, but that’s 12 race weekends. The same amount as a full F2 or FE season, with much more track time, with no progress to show for it? Glad I wasn’t the one making the decision…

I'm done with people citing Vettel as evidence that Red Bull's approach can work. Vettel tested a Williams BMW and raced a BMW Sauber before he ever sat in a Toro Rosso car. Vettel owes more to BMW than he does to Red Bull.

If you’re angry or upset that Pierre Gasly has been demoted by Red Bull, consider the following points:

1. He still has a **Formula 1 drive** with a team that has been on the podium

2. If Pastor Maldonado had scored those results in that car, would you want him kept on?

My thoughts on the Gasly-Albon switch:

Gasly deserved the demotion, but he's not a bad driver. Hope to see him find his pace and get back in a top team, which is where he belongs.

Excellent news for Albon who has been extremely impressive in the midfield all year.

"However, we did have a slow puncture on the Prime stint, so we were actually lucky that we finished the race and managed to bring it home."

"It doesn't mean I was slow, for sure, (that was) not the case. I learned a lot, and I think if you look at the pace of our car, I did not have a bad season in this way."

"Daly will drive the number 59 Chevrolet for Carlin. He also will be in the car at Gateway on August 24."

Red Bull dropped another of their driver market bombshells yesterday:

I am quite surprised. I honestly thought they would leave Gasly at Red Bull for the rest of the season.

I do wonder if they have made a mistake by promoting Albon so soon. This does put a lot of pressure on him as he must realise this is his big opportunity. I would have given Kvyat a second chance as I think the extra experience he has would have helped him to adapt more quickly.

The atmosphere at Toro Rosso is going to dismal as well I imagine. Gasly feeling demotivated and Kvyat feeling he won’t get another chance. Helmut Marko does appear to be a real piece of work.

Good luck to Albon though. I hope he succeeds.
Phil Norman (@Phil-f1-21)