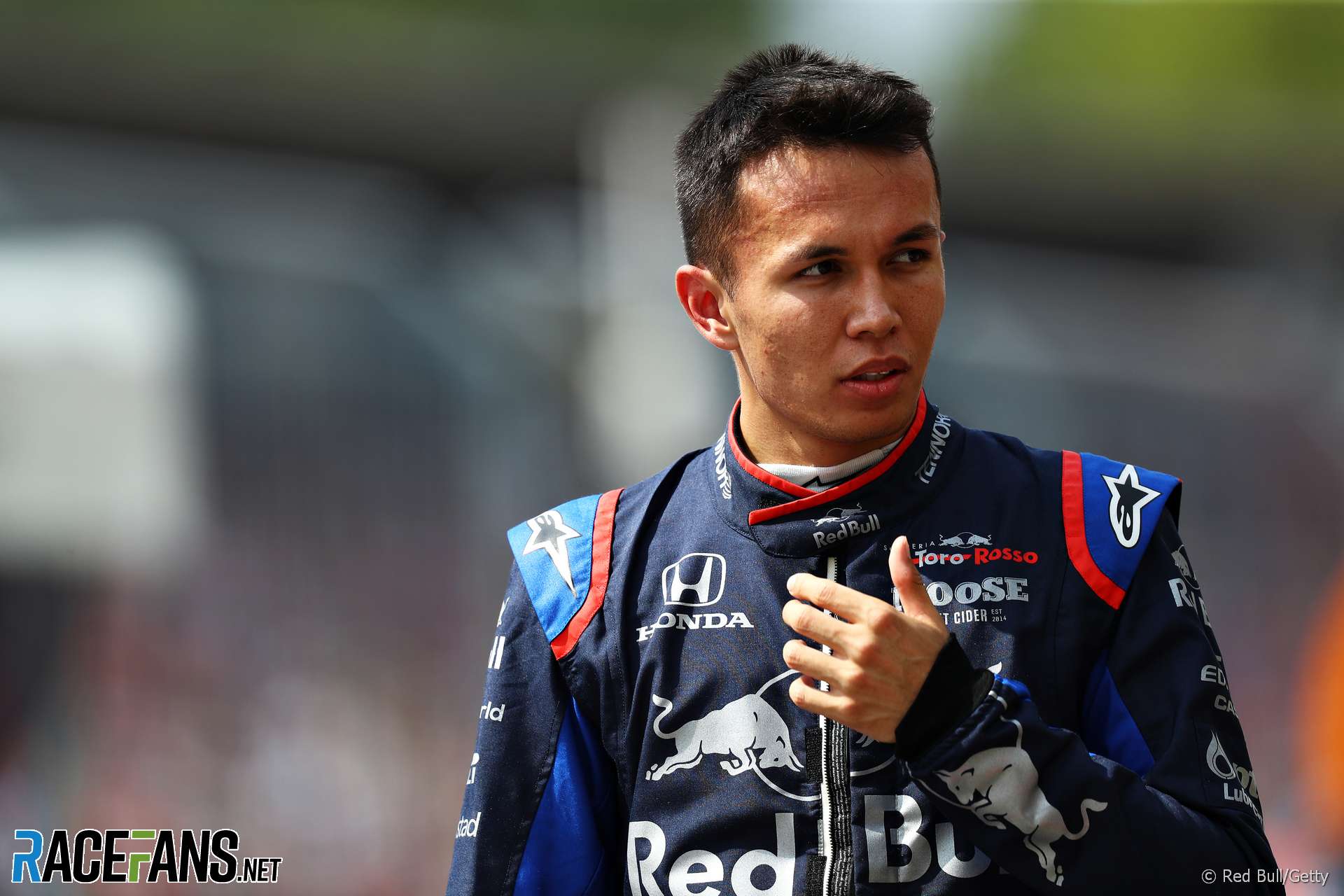 Alexander Albon, who Red Bull cut from their Junior Team at the end of a disappointing 2012 campaign, will make his first start for their F1 team at the next round.

But that’s just one example of how Albon’s route to a drive in a race-winning Formula 1 car has been so improbable.

It’s doubtful he saw this coming, even after his remarkable drive in the German Grand Prix last month, where he held fourth place for lap after lap and at one stage even took a pop at Lewis Hamilton. RaceFans has asked Albon for the latest on his contract situation for the 2020 F1 season on several occasions in recent races, but each time he’s had nothing to report.

“It’s quite quiet,” he told us in Hungary. “Just focusing on my job. There’s nothing changed since the start of the year, no extra talks like that.”

“It’s quite weird because the F1 world operates quite quickly,” he added. “For instance, at this time in junior level it’s quite normal not to even have these kind of questions. But it doesn’t faze me at all. There’s no worry.”

Undoubtedly, Albon has plenty of experience when it comes to fixing his plans late in the day. Last year he began his second season in Formula 2 without a full-time drive. Yet it was Albon, and not more lauded drivers such as Lando Norris, who kept the title fight against eventual champion George Russell going until the final round.

Albon made the transition from karts to cars two years before his fellow F1 debutants. But he didn’t meet success early on. On his single-seater debut in the Formula Renault 2.0 ALPS series at Monza he suffered a huge crash – bigger, he says, than the smash which kept him out of qualifying in Shanghai this year.

Meanwhile his team mate won both races and went on to take the title. His name was Daniil Kvyat, and while their paths would meet again, at this point their careers diverged.

While Kvyat was promoted into GP3, clinched the title and landed himself an F1 seat in the space of two years, Albon was shown the door by Red Bull at the end of 2012. Then-F1 outfit Lotus added him to their substantial roster of single-seater talent, but within a few years they were gone from the sport and Albon no longer had a direct link to a top team.

In the meantime Albon served a long apprenticeship at the Formula Renault 2.0 level, eventually peaking with third place in his third year in the top-flight Eurocup. That 2014 championship was won by Nyck de Vries, who’d entered the category at the same time as Albon.

It was easy to overlook Albon’s seventh place in the 2015 European Formula Three championship as he finished behind other series rookies, such as Charles Leclerc, Lance Stroll and George Russell, who had stepped up from karts later than he had. But while they raced for established outfits Carlin, Van Amersfoort and, in Stroll’s case, champions Prema, Albon distinguished himself with newcomers Signature, and contributed the majority of their points tally.

Once on the F1 support roster in GP3 and F2, Albon’s performance began to really catch the eye. He fought Leclerc for the 2016 GP3 title in the final round. In Abu Dhabi he planted his car on pole position, trimming Leclerc’s lead to 25 points. But in the race he tangled with Jack Aitken while scrapping for the lead and retired.

While Leclerc dominated F2 with Prema in 2017, he saw comparatively little of Albon, but has spoken highly of his rival. Albon finished a distant 10th in the points (not aided by missing Baku due to injury), but was the fourth-highest rookie.

This might have made most drivers a shoo-in for a second season in a category not regularly won by first-timers. But he could only cobble together a late deal to start the season-opening round of 2018 for DAMS. But he started the season strongly with fourth, and within a few rounds DAMS had signed him up for the full season.

Although Albon kept in the championship hunt with Russell and Norris, and went into the final round as the only driver capable of stopping Russell from winning the title, the interest from F1 teams didn’t appear to be there. Instead, he signed a deal to join Nissan’s Formula E team for the 2018-19 season.

But then Red Bull came knocking, six years after cutting him from their programme. Albon had a decision to make.

“When I was six years old, whenever I thought about motorsport… Formula 1 was always what any driver wants to do when they’re young. And of course even in Formula 2 the goal was always Formula 1. But as it looked less and less likely that’s when I went to Formula E.

“So when I got the chance again it was quite clear to me what I wanted to do. Of course there is less stability in Formula 1 but still staying that in Formula E you still have to perform and deliver results. On my side it was just kind of ‘no regrets’. You don’t want to miss out on your one chance of Formula 1 so that was quite an easy decision.”

Red Bull showed considerable faith in their former driver by appointing him to their junior F1 squad before he’s even driven an F1 car. But if that development came as a surprise, it was nothing compared to yesterday. Having been reunited with Kvyat, seven years since they first teamed up in Formula Renault, Albon has been chosen over his now considerably more experienced team mate for a Red Bull seat.

Albon’s produced some fine drives over his first half-season, not least a starring turn at the Hockenheimring. Kvyat may have come out ahead on the day, but as Albon pointed out, it was the fact Kvyat was running several places behind him which enabled him to make the gamble on slick tyres which put him on the podium.

Unsurprisingly, after that drive Albon found his first media session at the next race was a lot busier than usual, which he found “weird”. After that it returned to business as usual. “This is nicer,” he told RaceFans. “It’s easier to speak to you guys.”

It’s safe bet those days are over now…

37 comments on “The improbable, astonishing rise of Alexander Albon”