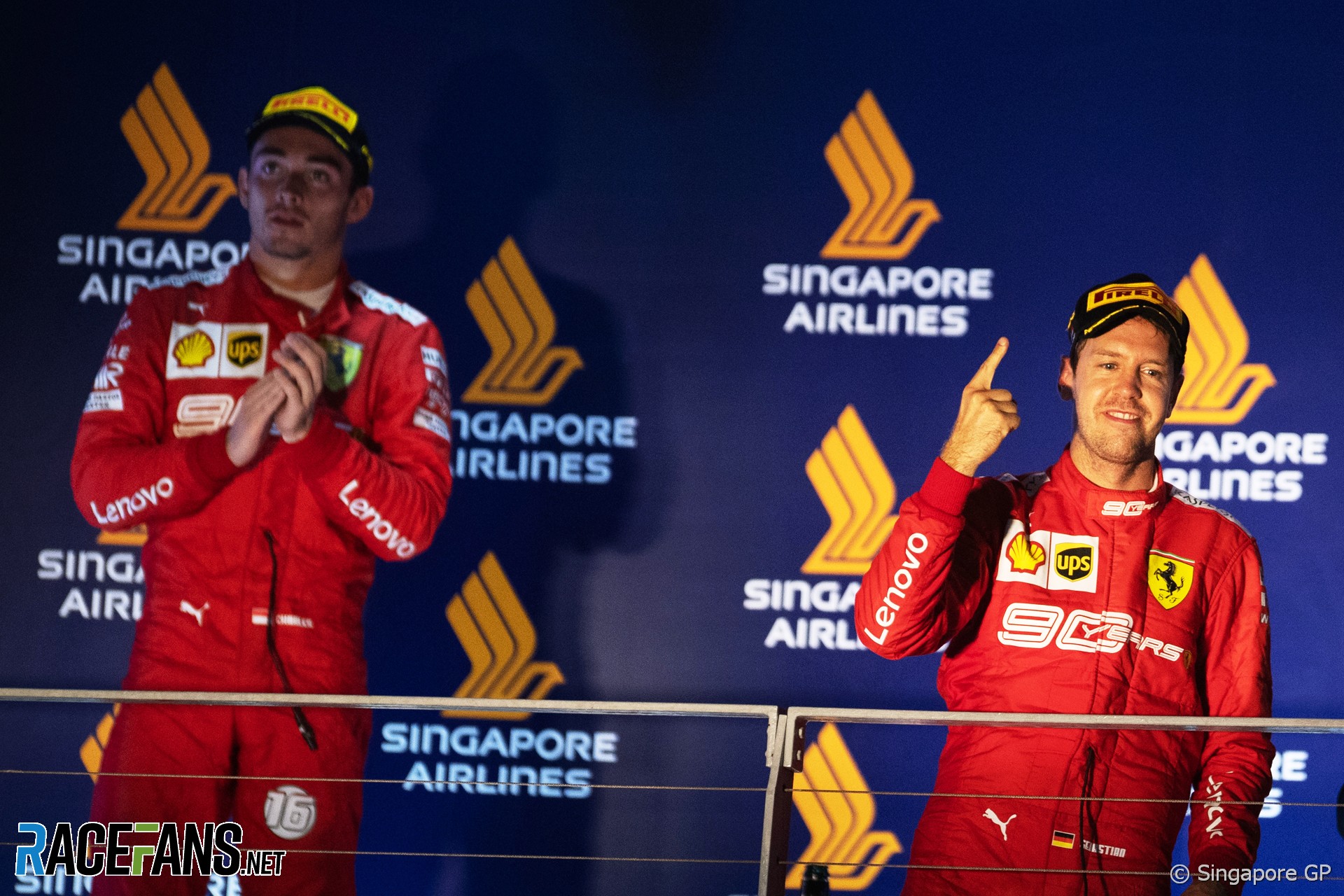 There was no explosion of joy, no repeated cries of “yes”. For a driver who had been waiting over 12 months to win a race, Sebastian Vettel was not exactly ecstatic.

If he didn’t feel fully satisfied by his fifth Singapore Grand Prix victory, it wasn’t hard to imagine why. This wasn’t a weekend where Vettel had taken the car by the scruffy of the neck and stamped his authority on proceedings.

He qualified behind his team mate – for the eighth time in a row – and would have finished there had Ferrari’s strategy not got him ahead. Why did the team do it, and why didn’t they reverse it? More to the point, were they fully in control of where their strategy took them?

Ferrari were not supposed to be this quick. The car which had languished half a second off the pace in Hungary, another maximum-downforce track, came alive on Saturday in Singapore. Leclerc stunned his rivals by taking his third consecutive pole position.

Lewis Hamilton just barely split the two Ferraris, edging Vettel off the front row by two-hundredths of a second. How had Ferrari achieved this incredible turnaround?

On Saturday evening Mercedes team principal Toto Wolff ventured the theory Ferrari had heavily biased their set-up towards single-lap pace, and would struggle in the race. But, he admitted, he would trade pole position for a weaker can for second place with a stronger one. The combination of turbulence and Singapore’s tight track layout makes overtaking difficult, and the leader can dictate a slow pace to avoid coming under threat from behind.

That is exactly what Ferrari set out to do and they achieved it. Hamilton had to fend off Vettel at the start and dropped immediately 1.7s behind Leclerc. But Leclerc had backed off his pace before the first lap began and Hamilton started lap two within a second of him.

Reducing he pace had two advantages for Ferrari at this stage. It prolonged the life of their tyres and ensured the field could not spread out behind, leaving no gaps in the traffic into which their rivals could pit and press on in clear air. “We can’t really go much slower,” Hamilton complained, as behind them first Nico Hulkenberg, then Daniil Kvyat, then Sergio Perez took turns to set the fastest lap of the race.

These were among the first drivers to pit: Hulkenberg damaged his car and Carlos Sainz Jnr’s by lunging into the McLaren at turn five on the first lap. Kvyat and Perez took their chances to pit and run to the end.

Now those midfielders had made their mandatory stops and were capable of running to the end, the front runners increasingly had to think about stops of their own. So how did Vettel, who ran third at the time, end up in the lead?

Having held the lap times in the mid 1’48s for several laps, Leclerc gradually began to increase his speed from lap 14. By lap 17 he was down to a 1’47.8, but Hamilton behind was still able to lap slightly quicker.

The call to pit still hadn’t come, and on the next lap Leclerc eased off again. His lap time rose by over a second, to a 1’49.0. He continued the steady pace on the next lap. Despite Hamilton’s show of speed Mercedes declined to bring him in at this point. According to Hamilton, he urged them before the race to take advantage of the opportunity to ‘undercut’ Leclerc if it arose.

Instead, is was Vettel’s crew who brought him in. He got the call at turn 20, a few hundred metres from the pit lane entrance, too late for either of the cars ahead of him to respond. This looked like a smart call from his team: Max Verstappen had slipped back from him and would obviously need to pit soon, particularly as Hulkenberg had just passed Romain Grosjean and was threatening to get into the Red Bull driver’s pit window.

Leclerc’s crew did not tell him Vettel had pitted. This was highly significant as he had clearly backed off his pace after lap 17 and if he had been warned his team mate had pitted he would have understood the need to keep the pace up, and likely found the few tenths of a second he needed to prevent Vettel getting ahead of him.

Afterwards several team bosses referred to being ‘surprised’ by how powerful the undercut was. This was in part due to the fact Leclerc was still managing the pace at the front of the field when the pit stops began, as Hamilton pointed out after the race.

Once Leclerc rejoined the circuit behind Vettel he asked the team whether they intended to switch their cars back around. After all, Ferrari had done exactly that under similar circumstances in Hungary, where Vettel also used the power of the undercut to get in front of Leclerc. Ferrari told him that matter wouldn’t be addressed until after Hamilton pitted.

This took some time, as Mercedes had now exhausted their strategic options and could only resort to leaving Hamilton out as long as possible in the hope that giving him fresher tyres for the end of the race would help him attack over the closing stages. It was a vain hope to begin with, and it was trashed when a series of incidents caused three separate Safety Car periods in the second half of the race.

The two teams’ tactics revealed a sharp difference in how they manage the strategies of two cars which can be in competition and co-operation at the same time. Mercedes took the view that they should not rob their own driver of his advantage over his team mate. As a result, Bottas was told by Mercedes strategist James Vowles to slow his pace at one point to ensure Hamilton stayed in front of him (and Alexander Albon, who was closing on Bottas).

Ferrari, however, saw no need to give Leclerc back the position they had cost him. This was an even more curious call in light of the fact Leclerc is their leading driver in the championship.

Leclerc repeatedly complained on the radio about the team’s strategy. “During the Safety Car I made my thoughts clear,” he said afterwards. “After that I just got back to work.” Leclerc’s mood did not improve when the team repeatedly reminded him to be careful at restarts and not use their higher engine modes.

As in Italy, on the cool-down lap Leclerc had a telling exchange with team principal Mattia Binotto which hinted at the behind-the-scenes tensions. Given Leclerc’s obvious dissatisfaction, Binotto’s congratulations were ill-judged. When Leclerc shrugged them off, Binotto responded “punto”, meaning ‘full stop’, meaning ‘no more’. No doubt both had rather more to say away from the microphones.

Leclerc wasn’t the only one unhappy with his strategy. According to Mercedes team principal Toto Wolff, Vowles took responsibility for the team’s failure to even reach the podium. “James, the wide shoulders, took on his chin,” said Wolff. “The first thing he said was ‘I fucked it up’.”

Behind the Ferraris, Verstappen had Hamilton all over him at the flag, though never close enough to try a move. Bottas lost more ground in the championship with fifth place, and Albon found the slow pace a relief in his first race around Singapore.

The McLaren-versus-Renault contest for ‘best of the rest’ was incident-packed. A furious Daniel Ricciardo was kicked from eighth place to the back of the grid for a technical infringement (one which, according to Renault, was almost imperceptibly minor). Then Sainz and Hulkenberg tangled, and so the waves parted for Lando Norris, who took the ‘class win’ with seventh.

Pierre Gasly made a wholly creditable rise to eighth, aided by a gutsy pass on Lance Stroll after the first Safety Car period. Hulkenberg limited Renault’s damage with ninth.

For the first time in four years, someone other than a Mercedes, Ferrari or Red Bull driver led a race. That someone was Antonio Giovinazzi, who started 10th and finished there, despite a 10-second penalty for getting too close to a crane during the first Safety Car period.

Giovinazzi finished far enough ahead of Romain Grosjean not to lose his point to the Haas driver. Grosjean had been delayed by a collision with George Russell, which caused Williams’ first retirement of the season, and triggered the first Safety Car period.

It was a miserable day for Racing Point. Sergio Perez and Stroll did fine work to pass Daniil Kvyat early on, but when the team detected an oil leak on Perez’s car he had to be ordered to stop, which triggered Safety Car number two. Meanwhile Stroll collected damage and finished out of the points, despite passing Ricciardo on the last lap.

Kevin Magnussen was out of luck as well: He might have bagged the final point, and Haas’s first for two months, if a plastic bag hadn’t got stuck to his front wing.

The final Safety Car period was caused when Kimi Raikkonen failed to notice Daniil Kvyat lunging up the inside of him at turn one. The Alfa Romeo driver swung in and took damage which ended his race, while Kvyat limped home 15th.

Ferrari secured their first one-two finish for more than two years. But the circumstances under which it was achieved only served to underline some uncomfortable truths for the team. This was not the vindication Vettel needed, nor the victory Leclerc deserved.

In the back of the mind was the events at Monza two weeks ago, when Vettel expressed his dissatisfaction with Leclerc’s qualifying tactics. Was Ferrari’s denial of restitution to Leclerc in Singapore rooted in a belief he had wronged his team mate in Italy? Or, as Vettel indicated, was this a case of ‘the team comes first’?