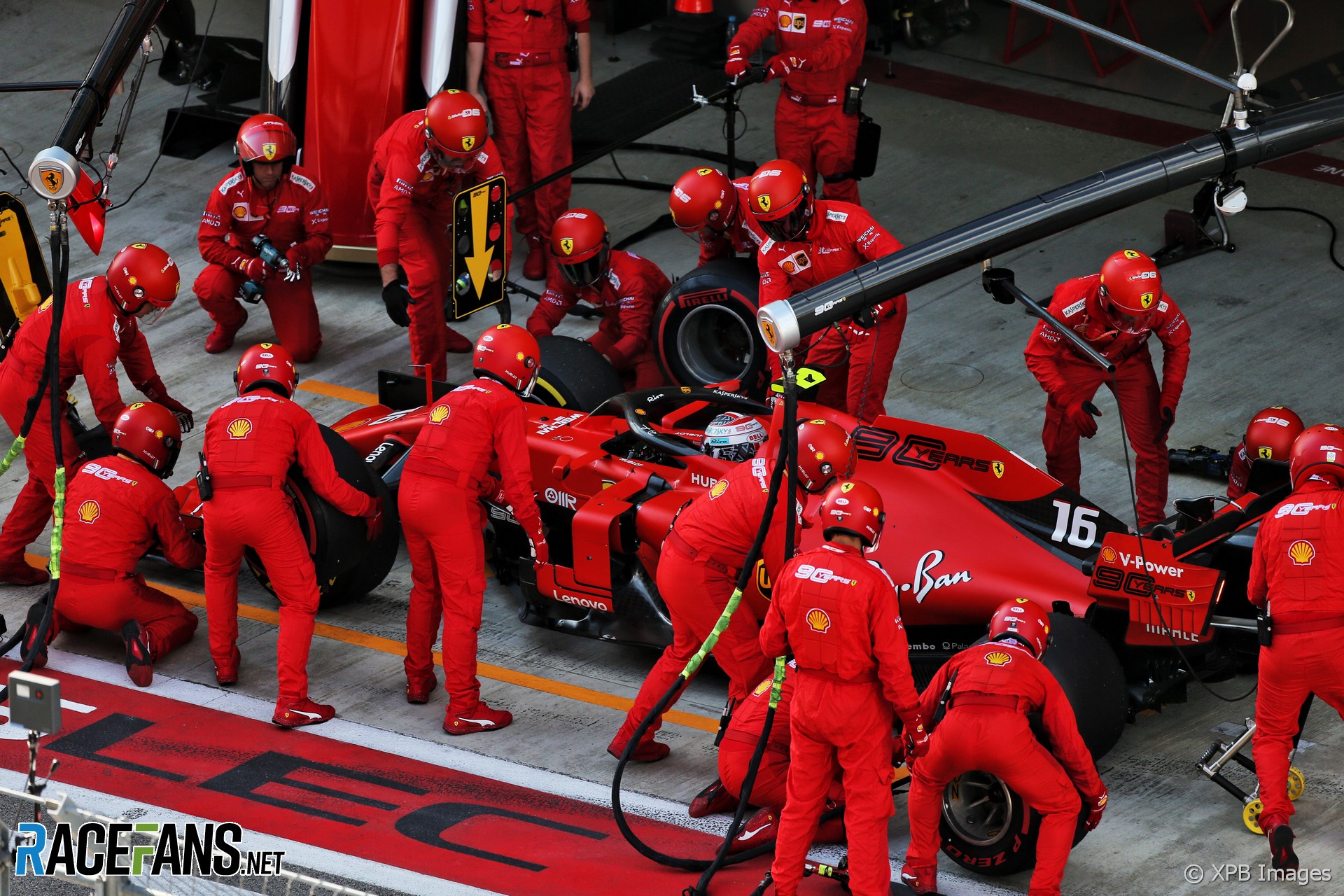 Ferrari denied Charles Leclerc’s pit stop was timed to move him ahead of his team mate, who had ignored an instruction to let him through earlier in the race.

Sebastian Vettel took the lead from his team mate at the start but was told shortly afterwards to let Leclerc by. He refused, and Leclerc was told the team would swap the positions later in the race.

Leclerc later moved ahead when Ferrari brought him in for his pit stop before Vettel. This allowed him to set a series of quicker lap times and jump ahead of his team mate when Vettel pitted.

After the race Leclerc said Ferrari arranged the drivers’ pit stops to put him back in the lead of the race. But speaking in the team’s post-race media briefing with both drivers present, team principal Mattia Binotto denied that was the case.

“The undercut was not for the reason of giving back the position to Charles,” said Binotto, who claimed Leclerc’s pit stop was due to tyre wear. “The left-rear was starting to be worn so that was the right moment for him to pit.”

Ferrari chose to leave Vettel out longer to reduce the risk that a Safety Car period could allow their rivals to make a ‘free’ pit stop and jump ahead of them.

“We knew as well that if we would have stopped both our cars we would have been vulnerable on Safety Cars by leaving the lead to [Lewis] Hamilton. So we tried to stay out as much as we could with Seb simply to protect in case of Safety Cars in that period of the race.

“Then again Seb’s tyres were worn, he called for it, it was the right moment to pit. He pitted and matter of fact Charles was ahead, Seb was behind but the race was still not over and there would have been plenty of opportunity to decide what would have been the best option later on.”

Binotto confirmed the team made a pre-race agreement that Vettel would have to give the lead to Leclerc if he used his team mate’s slipstream to get ahead of him at the start.

“Being first and second was the key objective,” he said. “How can you do that when you start first and third, certainly protecting the first position but as well making sure that you gain a position being second?

“But by giving the slipstream to Seb, not defending the position, would have given an advantage to Seb, which later on in the race [we] would have given back by swapping the cars. So that was the deal.”

Having watched the start, the team decided to tell Vettel to let Leclerc retake the lead. “Looking at the video, looking at the start our judgement that the start went as planned and therefore we thought it was right to ask Seb to swap the positions.

“Eventually, the two drivers may have different opinions by driving the car. That’s something which we may discuss with them.

“So we initially asked Seb to give the position back. But fair enough to say that at that stage of the race maybe Charles was not close enough and we would have lost some time on track. Later on Seb was quite fast and gained some track advantage on Charles. So we knew that we could have decided to do it later on.”