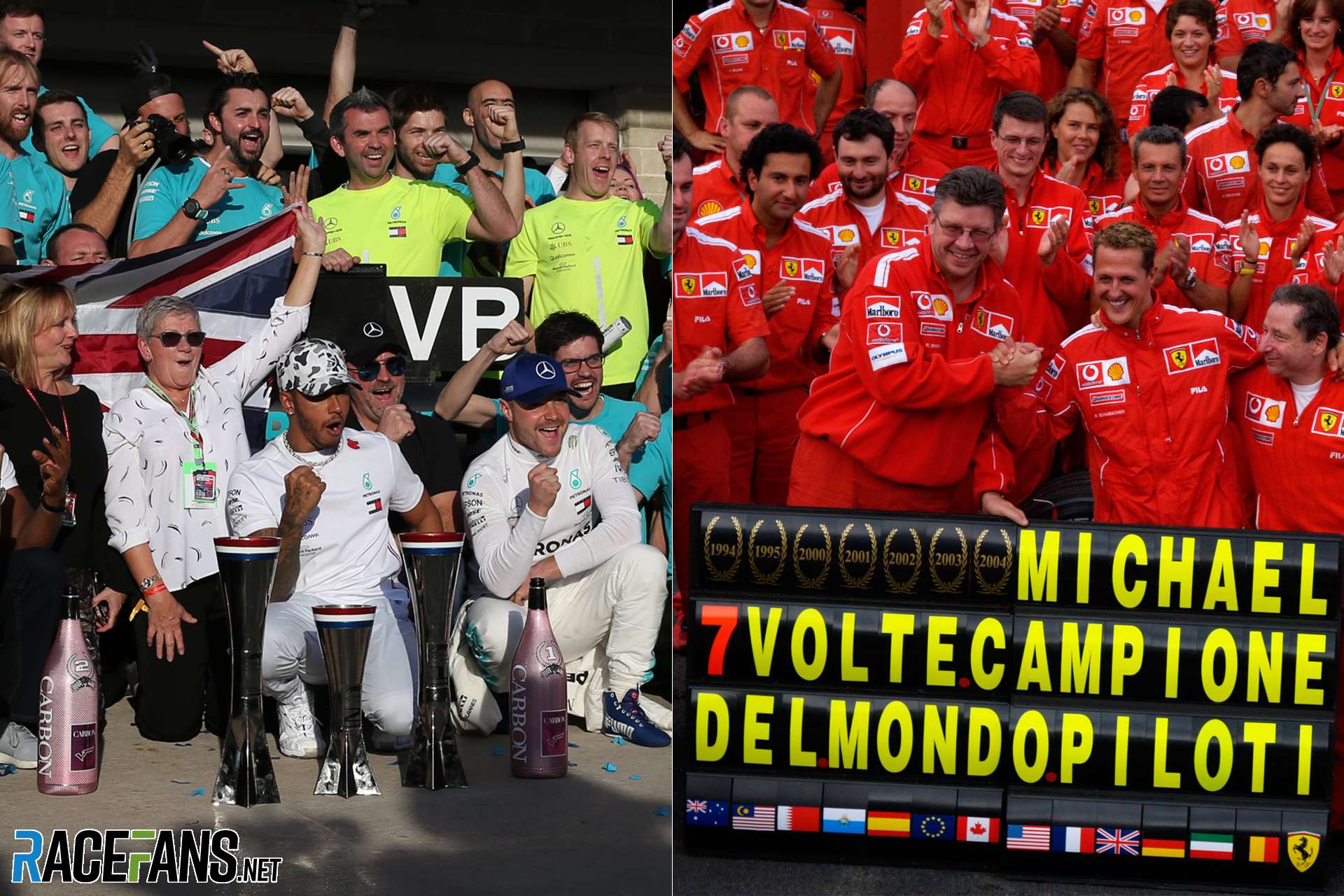 Lewis Hamilton’s sixth world championship is a tremendous achievement in its own right. But it is also one which brings him within touching distance of an even greater feat.

Next year, Hamilton can equal the record for the most world championships any driver has won. This, of course, is Michael Schumacher’s tally of seven titles.

For decades, the record of most world championship titles was held by Juan Manuel Fangio, who won the title five times in the fifties. For a long time it seemed that record might never fall.

The sport saw a succession of three-times champions: Greats like Jack Brabham, Jackie Stewart and Niki Lauda. The eighties ushered in another crop of triple-champions: Ayrton Senna, Nelson Piquet and Alain Prost. In 1993 the latter became the first driver since Fangio to make it to four titles, then called time on his career. Fangio died in 1995, his record unbeaten.

But by that time the driver who would finally break Fangio’s record had won his first title. Schumacher’s first of seven world championships came with Benetton in 1994, and he doubled up the following year. His subsequent move to Ferrari took time to bear fruit, but once it did, the floodgates opened. Schumacher claimed the next five titles in a row – a record of its own.

Fangio’s record fell on October 12th, 2003, having stood for over 45 years. The following year Schumacher claimed his seventh and final title. He came close to adding an eighth two years later, but was denied by Fernando Alonso.

That wasn’t Schumacher’s only title near-miss, of course. Jacques Villeneuve stopped him from taking the 1997 title in that controversial race at Jerez and Mika Hakkinen prevailed the year after.

Will Hamilton be the driver to equal and surpass Schumacher? He too can list three titles he could, perhaps should, have won. He almost became champion as a rookie in 2007, but Kimi Raikkonen edged him (and Alonso) by a point. Hamilton went into 2010’s four-way title decider with a shot at the crown and, as is often overlooked, ended the year just 16 points off the title. And then there was his 2016 defeat to Nico Rosberg, despite winning more races than his team mate.

Whether Hamilton can catch or beat Schumacher depends on how much longer he will carry on racing. He will return in the 2020 F1 season,in a car which is likely to be a championship contender.

What happens beyond that depends on whether Hamilton, and Mercedes, remain committed to F1. Neither yet have deals to remain in the sport after next year. Hamilton has, however, talking keenly of racing the new cars for the 2021 F1 season, and staying loyal to the team whose engines have powered him to every one of his championships.

And, for that matter, all of his race victories – another significant measure by which Hamilton is closing on Schumacher.

But the championships record is one of two major milestones which lie ahead. The other is the record for most race wins. Having taken 10 victories this year, Hamilton could overtake Schumacher next season.

Hamilton has already surpassed some of Schumacher’s records. In 2017, he became the driver who has set the most pole positions in F1 history. If the wins and championships records fall to him too he will be indisputably, in absolute terms, the greatest F1 driver of all time.

199 comments on “Analysis: Superior to Schumacher? Hamilton is one title and eight wins away from catching him”