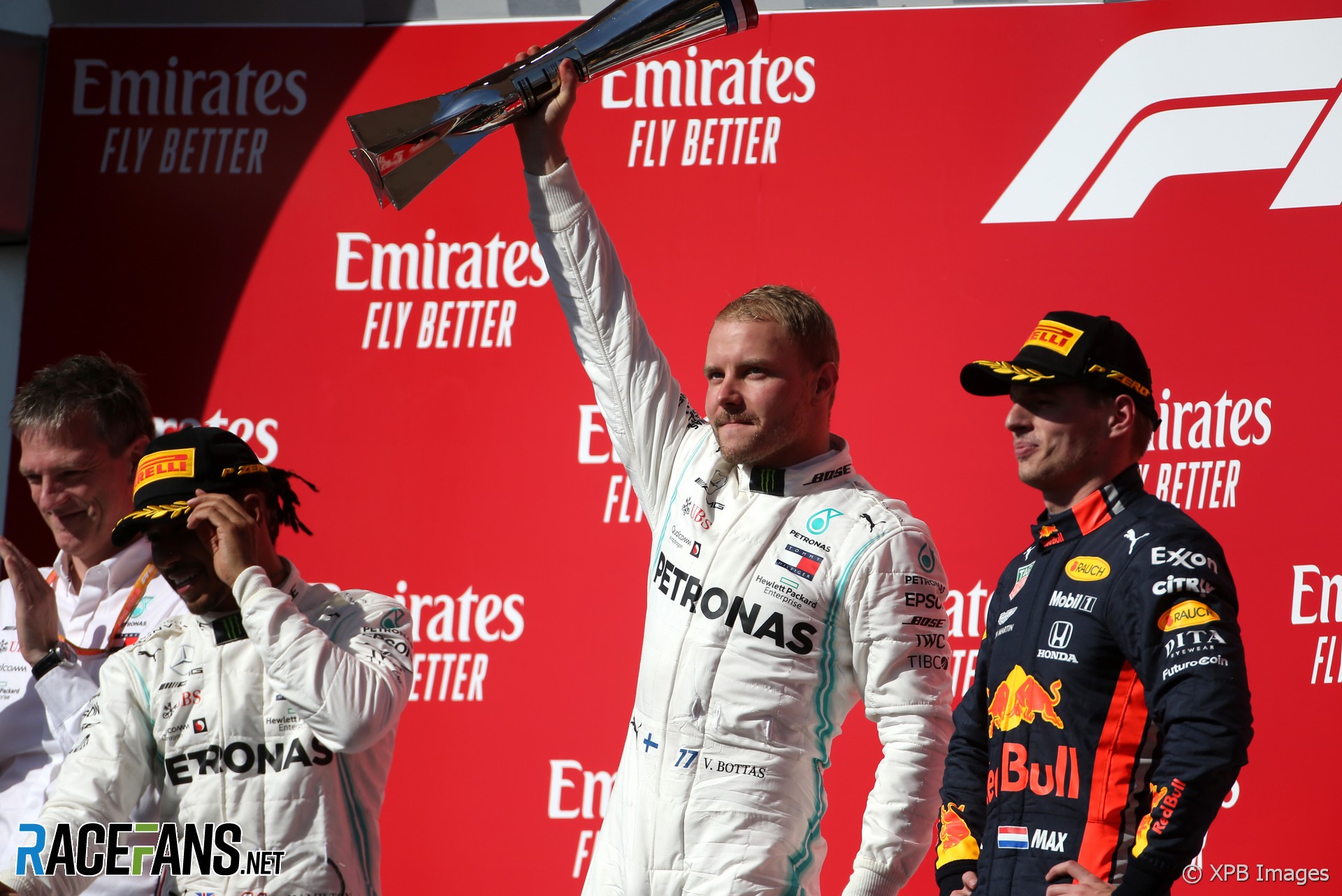 His championship hopes may have ended, but Bottas went down fighting. He took pole position and won convincingly, passing team mate Lewis Hamilton on the way. Qualifying was a close fight: he secured pole position by a mere hundredth over Sebastian Vettel.

Bottas dominated the opening stint of the race and held a nearly four second advantage over Verstappen prior to the first round of stops. His relatively early pit stop set him up for a two-stop strategy which meant he had to overtake Hamilton for the lead on track which he easily executed on the second attempt after being forced wide on the first attempt.

From there he cruised to the chequered flag for his second win in three races. Two more performances like this before the season is over will give his team mate sleepless nights about next year.

A fine drive and some canny PR from Daniel Ricciardo, who first talked up the McLarens, then beat them. He out-qualified his team mate to make it into Q3 and started ninth. After picking up two positions by the end of lap one he battled Lando Norris for the majority of the first stint for top spot in the midfield. Ricciardo made a one-stop strategy work, and narrowly held off Norris by less than four tenths thanks to the yellow flags in sector two at the end.

Pierre Gasly’s return to Toro Rosso continues to go well. He qualified in the top 10 again and was running ninth until his tangle with Sergio Perez on lap 52. The pair made contact at turn 13 which damaged the Toro Rosso’s front right suspension and forced him to retire on the next lap.

Stroll started ahead of his team mate, since Perez was forced to start from the pit lane, but went off at turn two on the first lap. From there his two-stop strategy took him out of contention and Perez finished comfortably ahead of him. “I’ve had better days,” says Stroll afterwards; not too many of them this year.

Grosjean was thrilled by the balance of his Haas in first practice, less so with his repaired machine after bouncing off the turn five wall in second practice. His weekend never recovered from there. Having qualified behind Magnussen he ran behind him in the race.

Hamilton came out on the rough end of a close qualifying session with his lowest starting positions of the year: fifth. However he got by both Ferraris at the start and spent his first stint chasing Max Verstappen before the Red Bull driver’s early stop. Hamilton made his tyres last long enough to try the one stop strategy, but couldn’t protect his lead from Bottas, and was fortunate the yellow flags in sector two for Magnussen prevented Verstappen from trying a move to reclaim second.

Ferrari couldn’t tell where their car’s pace had gone but were adamant it was nothing to do with the recent ruling on engines. Both drivers struggled to find any pace during the race with Vettel losing four positions on the opening lap and eventually retiring from the race with a dramatic suspension failure. Leclerc endured an uneventful race since he lacked the pace to challenge those ahead of them, but was too quick for the midfield drivers.

Albon tangled with Sainz at the start and was forced to pit on lap one. Despite being unable to run his hard tyres, one of which had developed a crack during practice, he recovered to fifth by the end of the race.

Hulkenberg was unable to challenge Ricciardo throughout the weekend, but he still managed to score a couple points on a two-stop strategy.

Perez not only missed the weighbridge in qualifying, he failed to heed his quick-thinking race engineer’s reminder not to pull into his pit box having done so, which ended any chance of him avoiding a penalty. He made amends on Saturday, using a one-stop strategy to cut through the field and bring home a point despite contact with Kvyat in the final laps.

The Toro Rosso driver had been eliminated in Q2, but challenged Perez for points at the end of the race. On the final lap he tried to pass the Racing Point for tenth, but he hit the Racing Point car and was handed a five-second penalty.

Antonio Giovinazzi got the better of Raikkonen in qualifying but both Alfa Romeo drivers were eliminated in Q1. Raikkonen gained five spots on the opening lap and was running in and out of the points during the race. He was unable to keep up this pace at the end of the race and finished 12th, which became 11th after Kvyat’s penalty, not that Raikkonen was at all satisfied with another point-less finish.

Magnussen made a strong start in the race but couldn’t keep up with the drivers in and around the top ten and he slowly dropped towards the back of the pack. He warned his team about a developing brake problem which put him out of the race a few laps before the end.

George Russell was the quicker of the Williams drivers while Robert Kubica suffered a hydraulic leak that forced him to retire.